In our new music feature Origins, we offer musicians the chance to dive deep into the backstory of their latest single. Today, Knot explain what’s up with that “Horse Trotting, The Feet Not Touching the Ground”.

Five years after calling it quits, the members of Boston rock outfit Krill decided to reconvene — but this time under a different name. Enter Knot, a group that pairs original Krill members Jonah Furman, Aaron Ratoff, and Ian Becker with additional guitarist Joe DeManuelle-Hall. Together, the freshly formed band is kicking off its new chapter with a self-titled debut album due for release on August 28th.

Indeed, Knot’s members have aged a bit and #adulting is more the norm than a novel lifestyle. Fans heard this sharpened worldview on early singles like “The World” and “Foam”. Today’s offering, “Horse Trotting, The Feet Not Touching the Ground”, follows suit. On it, Furman talks about growing older and wiser — at least enough to not “be fooled by such childish things” like a fake figurine horse. Ahh, but isn’t ignorance bliss?

Musically, Knot have also expanded on Krill’s sound. In addition to the usual lo-fi and whimsical indie rock we’ve come to love (think Pavement and Built to Spill), the four-piece fold in new layers of stuttering and shifty math-rock.

Stream “Horse Trotting” below, followed by the band’s Origins of the track. You can then pre-order Knot the album here.

Edgar Degas’ Horse Trotting, the Feet Not Touching the Ground: 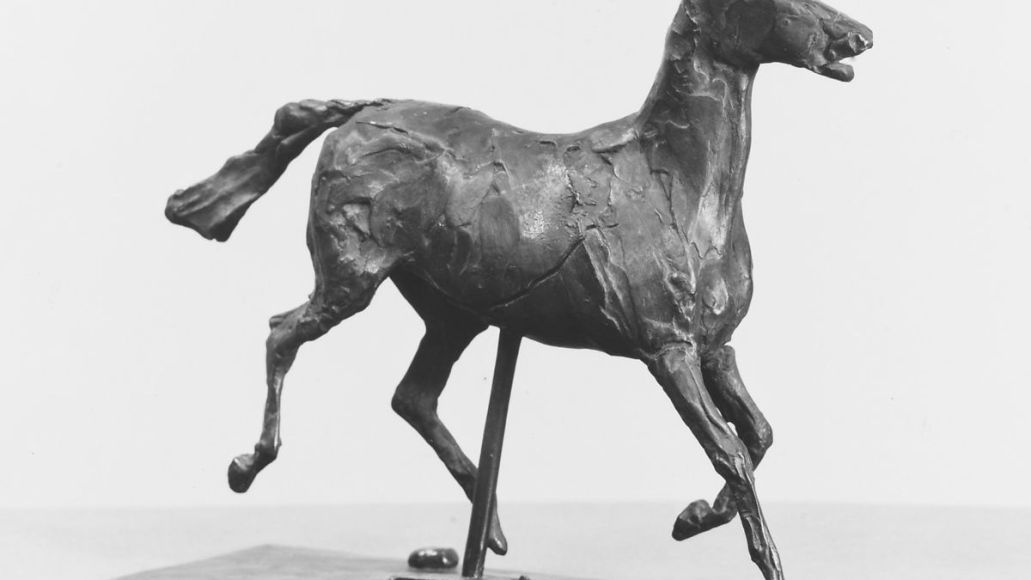 Horse Trotting, The Feet Not Touching the Ground, photo via Metropolitan Museum of Art

The song is about when I saw this in a museum. The song has the same name. It’s ekphrastic in some basic way.

Skull trumpet doing Evanescence (“doot me up inside”):

Probably the song we listened to most during recording. Our highest recommendation. Rewards deep listening.

It’s hard to break out of a certain ‘tenor’ of songwriting. Yo La Tengo, especially Ira Kaplan’s way of whisper-singing like it’s 4 in the morning, has always impressed me in how it sets a totally different tone. Obviously this song remains

frenetic and tense, but I wanted to try ripping Ira’s whisper move for the sort of climax of the song — “But that was years ago.”

This (and other process music, like Steve Reich) inspired the first riff, and I think kind of implies the motion implied by the original statue. It reminds me of those visual tricks where you put a slotted sheet of paper in front of several images of a horse and it simulates motion. In another world the song would just be 5 guitars phasing this riff over one another.

All Lomelda songs are wonderful. This song in particular has so much space, and so much weight, but every moment of it feels indispensable to the whole. It’s hard for the instrumentation of a song to totally reinforce that, but in Bam Sha Klam it does. And the overall tone is like if you could get shrunken down and walk around in one of your own feelings. Beautiful song (and amazing band).