Artist of the Month is an accolade we award to an up-and-coming artist who we believe is about to break out. In September, we focus our attention on Anjimile, a queer Black indie troubadour deeply inspired by Sufjan Stevens.

At age 27, Anjimile has already died many times. But it’s the triumphant rebirths that are most celebrated on his insightfully raw, yet tender debut album, Giver Taker, due out later this week on Father/Daughter Records.

Raised in Dallas before relocating to Boston, the Black, non-binary trans singer-songwriter (he/him, they/them) makes peace with a destructive former self once consumed by addiction while also discovering his place within his deep Malawian lineage. Perhaps most importantly, he embraces and introduces the world to his new trans identity — for the very first time, his mind, body, and spirit are aligned.

Finally, he is Anjimile inside and out. Reflected in his mirror and yours. Seen and named by himself, his ancestors, and anyone he crosses paths with. Living truthfully, unapologetically, and resiliently in the face of hate and violence. 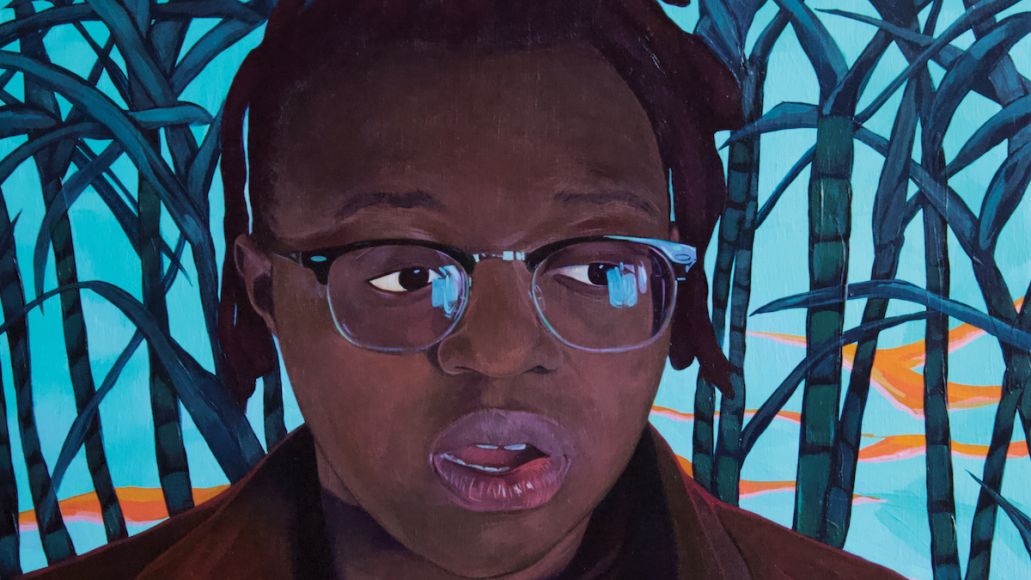 Despite the advice of his doctor father and computer programmer mother, Anjimile has poured himself into his music career. And it’s proven to be his most vital outlet.

While change has come year after year, music has remained the constant. The site of emotional battles won and lost; a tool used for all the untangling of life’s complexities; and a record of his deaths and evolution.

Giver Taker is his first release since getting sober and identifying as trans masculine, and when comparing the record to his past output, the contrast is staggering. “It’s wild, it borders on disturbing,” Anjimile tells me, half laughing, but also deadly serious. “I still love that music, but it represents such a different time in my life,” he continues, “and also such a different sound of my voice pre-testosterone.”

As many trans people will tell you, myself included, coming out and living authentically feels both new and yet not. Think of it like unzipping a Halloween costume you had to wear for the last two or three decades — you were always that person under the mask, but now you’re free to actually show yourself.

“When I listen to those [old] tunes now, I’m like ‘holy shit,’” says Anjimile. “It feels like a different person, but it’s not a different person — it’s totally me.” He adds, “It’s weird to kind of construct the bridge between my former self and my current self.”

For Anjimile, who for nearly 10 years identified as a lesbian, he always sensed there was something more to him that wanted to be revealed. But he never quite had the vocabulary to articulate that.

That didn’t stop it from manifesting itself in other ways, though. He and I bond over ‘90s male heartthrobs like Zack Morris from Saved by the Bell and Shawn Hunter from Boy Meets World — or rather, we bond over our realization that we didn’t actually crush on these guys like our teen selves originally thought. We wanted to be them.

Anjimile has come full circle from those days, confessing that he “more or less” dresses like Shawn now, leather jackets, plaid and all. I tell him I’ve given up trying to attain the popular Jonathan Taylor Thomas bangs swoop, but have happily hacked off most of my thick and pin-straight, waist-length hair.

A majority of songs on the new album were written just before officially coming out, but hidden within a few lyrics are clues pointing to his transness. “I’m not just a boy, I’m a man/ I’m not just a man, I’m a god/ I’m not just a god, I’m a maker,” he sings on Giver Taker single “Maker”. It’s like a bit of foreshadowing, subconsciously acknowledging the person behind the mask. That person who badly wants to break the binary, and whose gender was “assigned” to them according to social constructs built by patriarchy and colonialism.

“I feel like there’s a part of us that is just essential and who we are,” Anjimile says. “And that kind of gets squashed with socialization and assimilation into culture. So it takes some digging as an adult to uncover what was buried.”

Luminous Kid: When I Made... At The End of the Dream

Artist of the Month Anjimile on Overcoming Addiction, the Power of Ancestry, and Being Black and Trans Under Trump