“You can’t let the mistakes of your past determine your future.”

Cobra Kai is a study in redemption. On August 28th, the former YouTube series hit Netflix with a splash, offering uplifting empowerment and sweet nostalgia that feels like rooting through an old shoebox filled with mixtapes. After all, 1984’s The Karate Kid is a beloved classic that empowered a generation to stand up for themselves (not to mention, catch flies with chopsticks and practicing crane kicks on the playground).

But by expanding the narrative, Cobra Kai offers a powerful story of redemption that is a much-needed and much-welcome message for these divided times. The series follows a down-on-his-luck Johnny Lawrence (William Zabka), the bleache-blonde bully who tormented Daniel LaRusso (Ralph Macchio) and ultimately lost to him in the climactic All Valley Karate Tournament.

TV Review: Cobra Kai Season Two Shows How Anyone Can Be The Hero, Not Just The Karate Kid

Until now, the story for Johnny had ended in a parking lot (see: 1986’s The Karate Kid Part II). But by flipping the script and showing the motivations and humanity of the former Cobra Kai champion, longtime fans can see a new side to the would-be villain. More importantly, we can all see that anyone can be the hero and that it’s never too late to change. 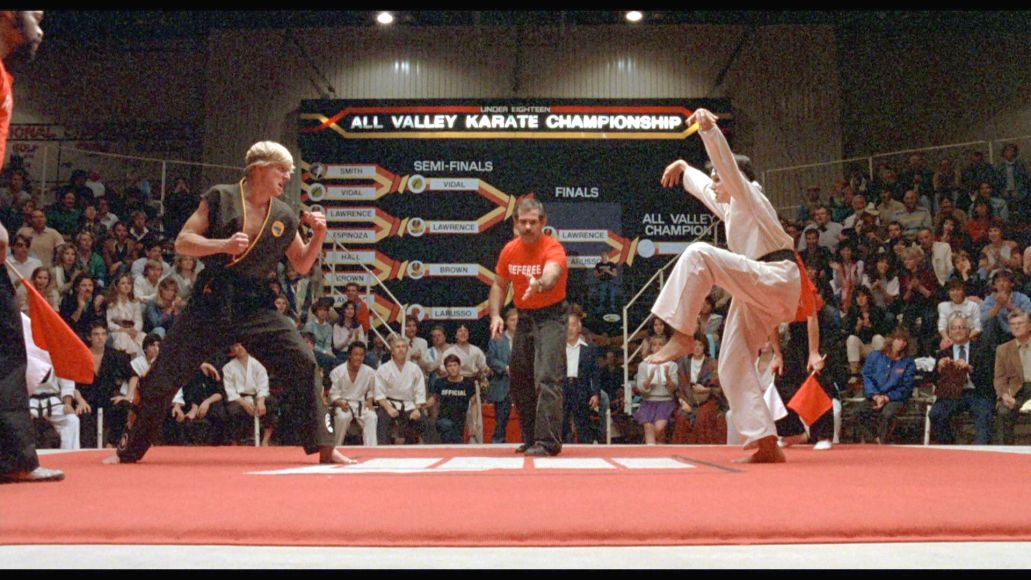 I recently watched The Karate Kid with my children and, as an adult, I was shocked by how young Johnny appeared. He’s a high school senior — just a teenager — when the events of the first film take place. Through the lens of time and experience, I could clearly see how he was manipulated and led astray by his sensei John Kreese (Martin Kove).

Johnny’s gasp when Kreese asks him to “sweep the leg” is telling. I’m not excusing his actions — in the end, he chooses to fight dirty — but he does it because he was told to by someone he respects: the grown-up in the room. It’s a sobering look at how impressionable young minds can be manipulated and radicalized by adults with their own demons. Johnny may get his just desserts, but as the story continues, we see that he is a victim as well. 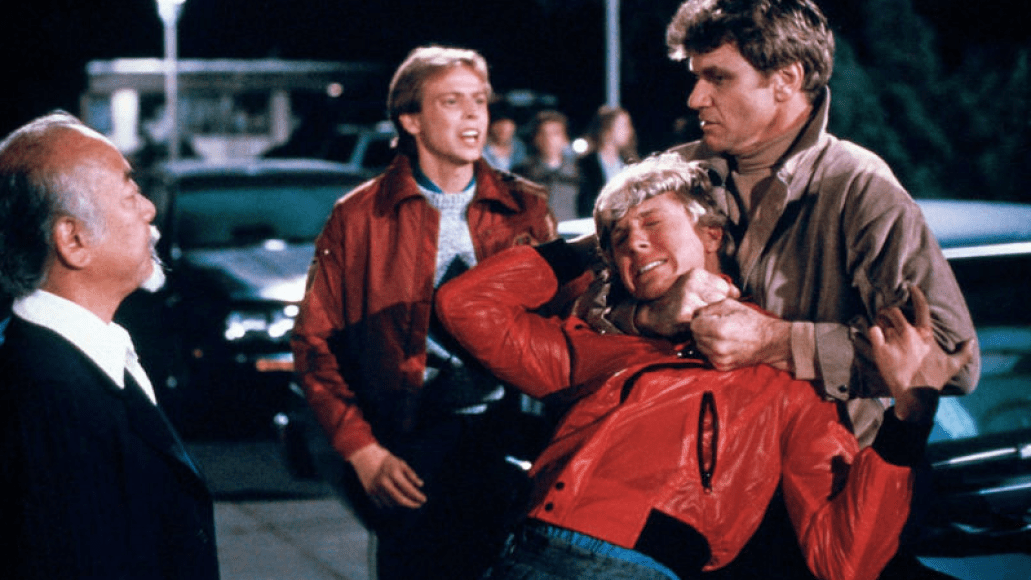 Part II begins immediately after the tournament with Kreese attacking Johnny in the parking lot. It’s a brutal and upsetting assault that still has the power to shock. Johnny does everything he’s told, and when it isn’t enough, when he isn’t a winner, he’s punished. He’s betrayed and attacked by the one person he thought would always support him. Years later, he tells Daniel, “At least your role model didn’t break your trophy and try to kill you.” It’s a deflection, but it carries so much trauma.

Perhaps it’s not the humiliation of the loss, but the shame and betrayal that derailed his life. 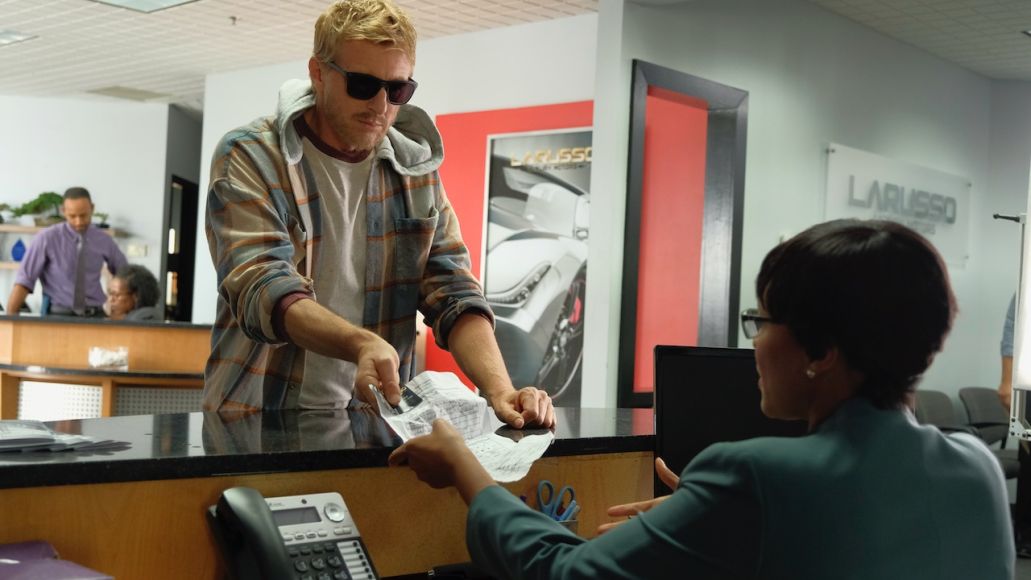 Cobra Kai shows us the rest of Johnny’s story. He’s a “loser” now. He’s broke and drunk and still clinging to the alpha mindset of his teenage years. We’re led to believe it’s being on the losing end of that iconic kick that haunts him, but we learn that it’s the trauma he suffered in abusive relationships that renders him incapable of making any meaningful connections or commitments.

Eventually, we find out that his stepfather was verbally abusive, constantly shaming and belittling him. At home, Johnny was told he was weak and worthless so many times that he started to believe it. The Cobra Kai dojo offered him an escape from that, a way to become powerful, with Kreese insisting that you must strike hard, strike first, and never show mercy.

The problem is that this power is cloaked in entitlement and anger. Kreese is not offering strength, but aggression. He’s showing Johnny not how to respond to his stepfather, but how to become him. And in the process, he created a bully.

“Defeat Does Not Exist in This Dojo” 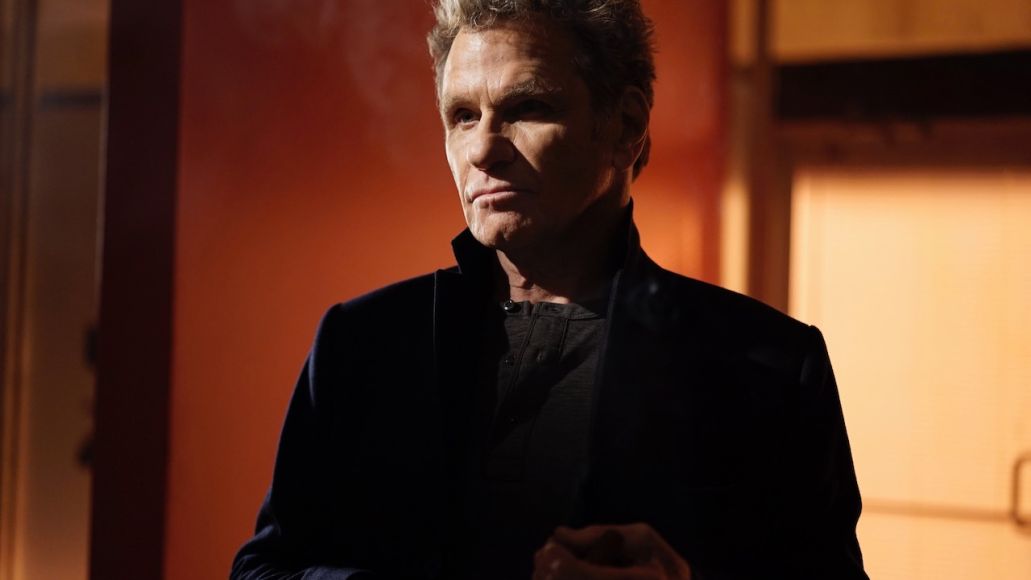 I grew up with a father like Kreese. We didn’t have aggressive mantras painted on our walls, but I learned early that the world is made up of winners and losers, and that anything other than perfection is unacceptable. I was taught that life is a zero-sum game, and that in order to lift myself up, I must push others down. So I did. I wouldn’t call myself a bully, but I said and did hurtful things that I deeply regret. I followed a similar path to Johnny’s as well, drinking to numb the pain of never feeling good enough and avoiding close connections with anyone so they wouldn’t have a chance to find out how terrible I was.

It wasn’t until I started teaching that I began to change. My students, each with special gifts and unique potential, needed me to help guide them in understanding the world. In doing so, I began to see the fallacy in everything I’d been taught. Johnny has a similar awakening. His first step down the road to redemption is in defending Miguel (Xolo Maridueña) from a gang of bullies, a group of teenagers acting exactly as Johnny and his friends did towards Daniel. When his own son is the victim, he is able to fully understand the pain he caused when he intentionally injured Daniel in the tournament. These moments of empathy cause him to question the way he sees the world. 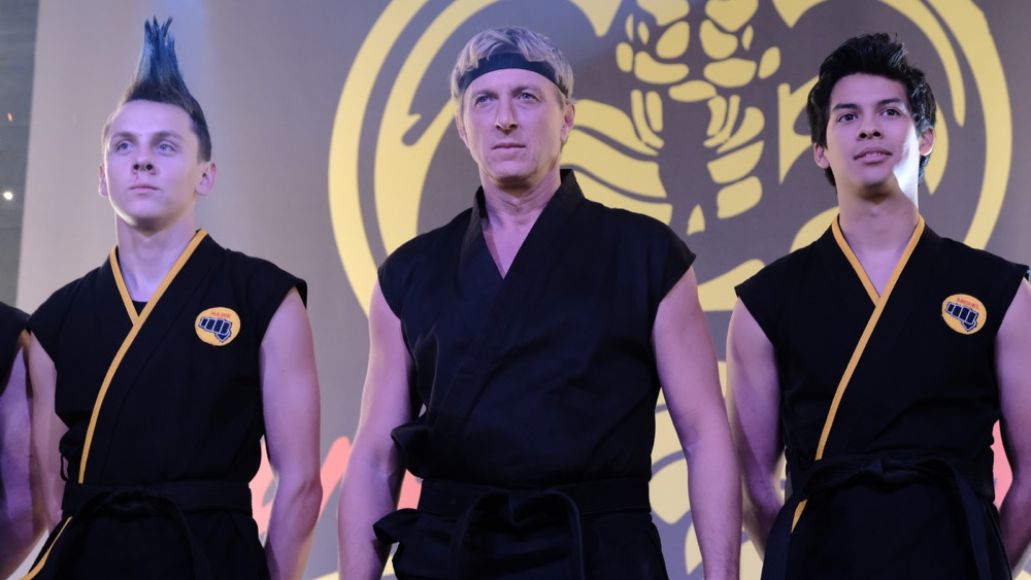 The major lesson of Cobra Kai is that change is possible. There really are no bad people, only people who do bad things. Johnny learns this through mentoring his students Miguel and Hawk (Jacob Bertrand). Miguel constantly challenges Johnny’s close-minded actions, and asks him to grow without turning his back on him. It’s not a perfect road, but the two learn from each other in a way that makes them both better people. Miguel gains confidence and learns to stand up for himself, while Johnny learns that the world is not out to get him. What’s more, Johnny comes to realize that letting anger guide his actions only ends up hurting him in the long run, and that he can be strong without making others feel weak.

In Eli/Hawk, Johnny sees his former self. Because of a minor facial deformity, Eli is mercilessly mocked and bullied, even by Johnny. It’s not until he completely rejects his former self that he feels accepted in Cobra Kai. But because he has so fully internalized the narrative that he’s a loser, Eli must shed every once of his former life, reinventing himself as Hawk. While this begins as empowerment and transformation, Hawk begins to take out his anger on others, engaging in the same bullying he was once the victim of in the past. He has not become a better version of himself; he has become the enemy he once feared. There is power in that, but it requires holding onto the hurt in order to fuel the aggression. He has become the new Johnny.

“An Enemy Deserves No Mercy” 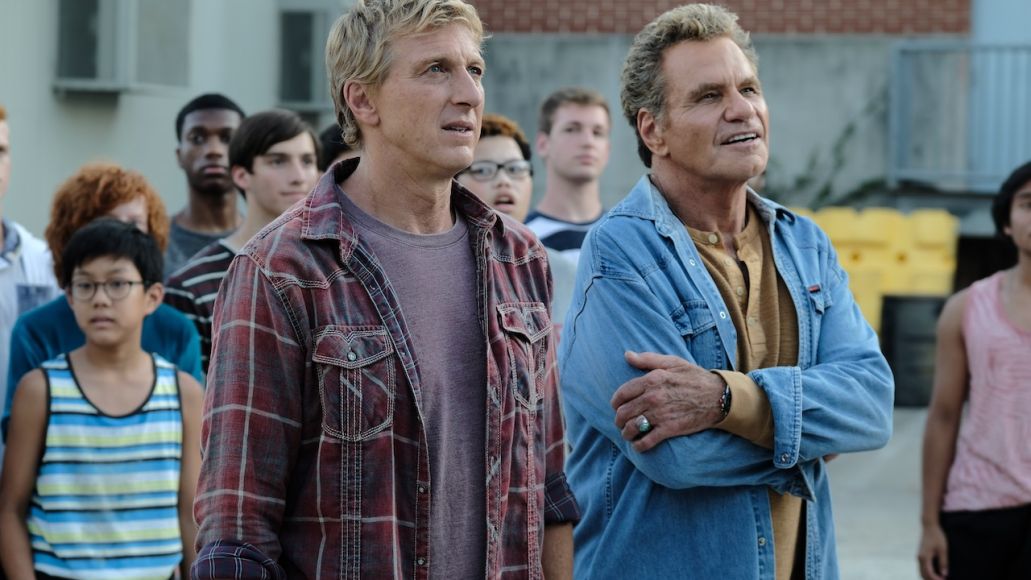 As Johnny begins to change, Kreese is there to complicate his journey. He says he wants to change as well, and Johnny offers him that chance. But it’s not enough. It’s here Cobra Kai shows that an apology is a single step down the long road of redemption. It’s a start, but to truly earn your way back, you must actively try to change not just your actions but your mindset. Johnny does this when he challenges his long held belief that mercy is for the weak. He’s lived with the consequences of that mindset long enough to know that it just isn’t true, and he doesn’t want to lead his students down the same road of destruction.

“Trust the Quality of What You Know” 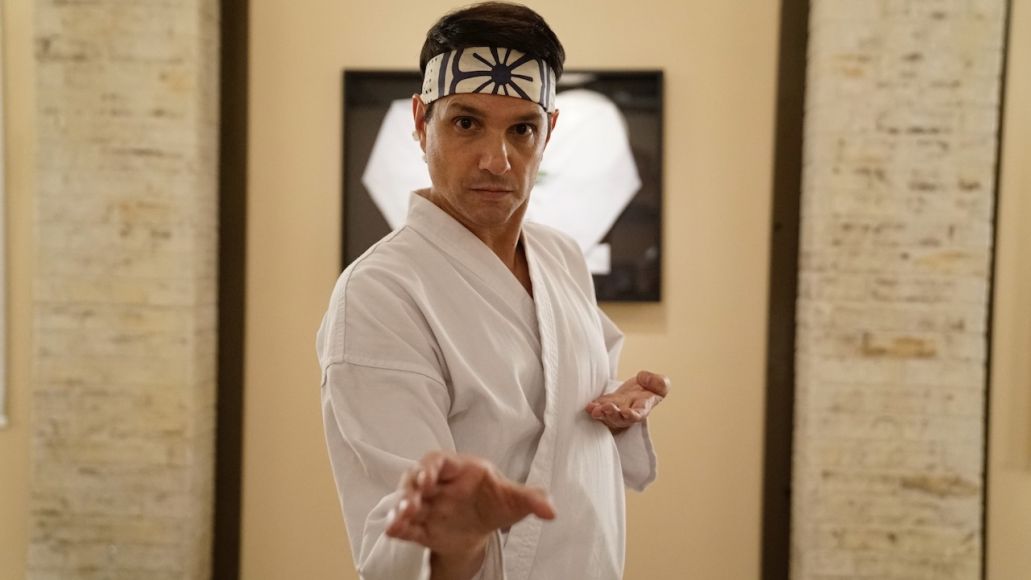 But what of Daniel? Should he be obligated to forgive Johnny? No, and Cobra Kai does not ask him to narratively. Victims are constantly asked to carry the burden of forgiveness, even when the perpetrator refuses to ask for it. But Cobra Kai shows us that true forgiveness is for the wounded and often does not change the aggressor. Instead, it’s a way for us to heal ourselves.

Daniel tries to forgive Johnny and move on with his life, but it’s not easy. Seeing the name Cobra Kai brings back painful memories, and he is tempted to give in to them. But when he is able to remember the lessons of his own sensei, he can find the strength to rise above it. He knows there will always be someone stronger, louder, and meaner … and that sometimes the fight will come to him. But he also knows that if he can focus and find the balance within, he will have the strength to show them a better way. 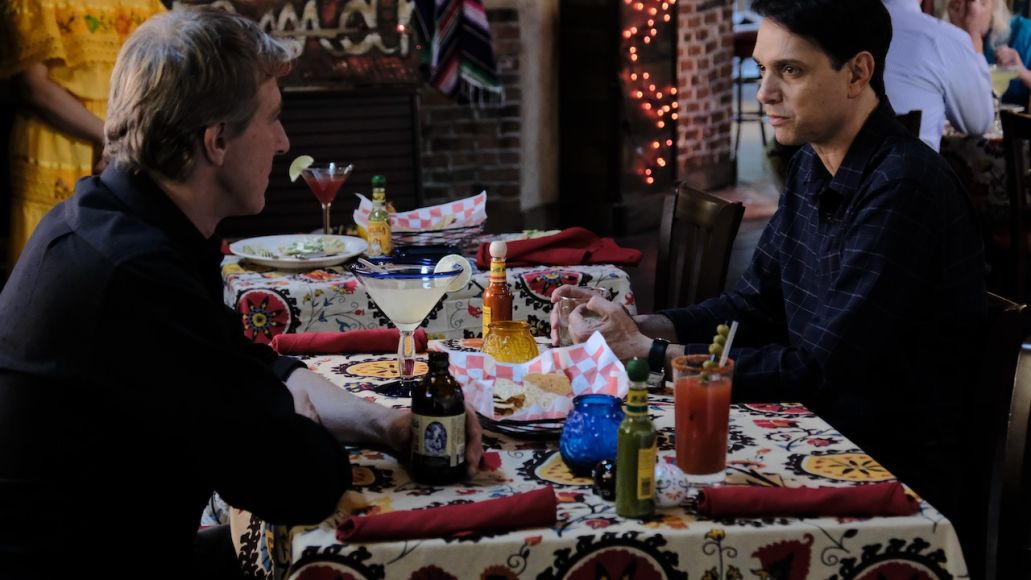 Because he fundamentally believes that everyone can change, Daniel is able to see the humanity in Johnny and forgive him. Not because Johnny deserves it, but because it helps Daniel move on. His students respond to this mentality, and learn to work with each other rather than against. Johnny attempts to do this in his own way, and the two are able to make amends.

It’s an uneasy peace filled with ups and downs because that’s life. None of us are perfect. We are all capable of being both the hero and the villain. But if we keep trying, we can learn and grow together even when it hurts. 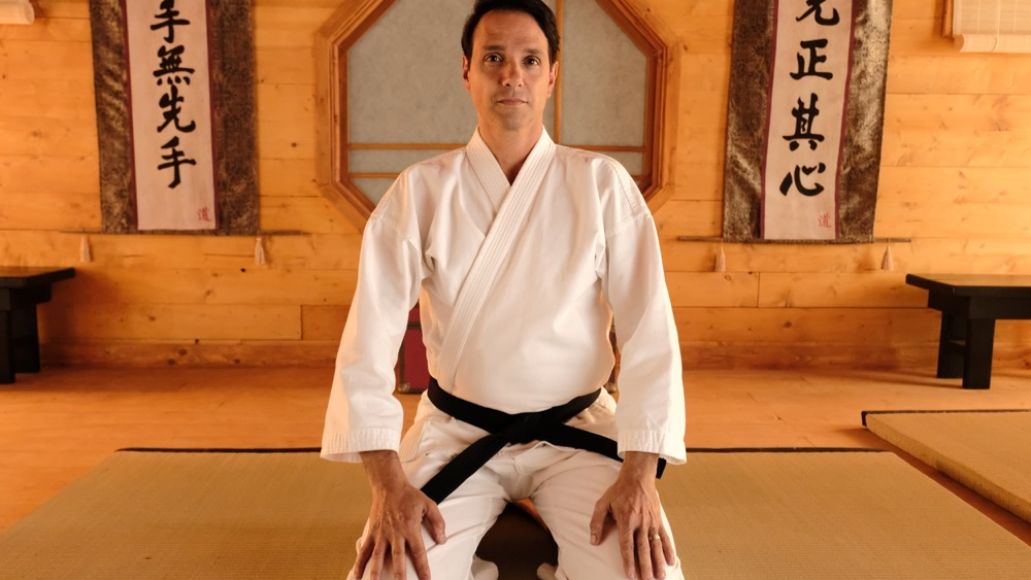 Many of us grew up with Daniel as our hero, but not all of us are or were Daniels. Some of us have been Johnnys. Too many of us, in fact. And some of us are only now seeing the effects of that zero-sum mentality manifest in terrifying and deadly ways every day. I’m not excusing any of Johnny’s actions. He was a bully who caused a lot of pain, but how many of us have taken our own pain and inflicted it upon others? It’s human nature to want to punch back harder.

But the beauty about Cobra Kai is how the series never gives up on the idea that change is possible. We start by admitting the harm we have caused, and then we ask for forgiveness. We don’t demand it; we ask humbly. From there, we have to work and show that we’re worthy of it, and, in the process, we must forgive ourselves. Because once we believe we’re not losers, we can start to identify our bad teachers and reject what they taught us. It’s a painful road, but it’s one worth taking.