This review is part of our coverage of the 2020 Toronto International Film Festival .

The Pitch: Pregnant couple Sean (Shia LaBeouf) and Martha (Vanessa Kirby) go through a dangerous labor with a new midwife, Eva (Molly Parker), only for the worst possible outcome to occur. In the months that follow, they each process their grief and anger in different ways. Meanwhile, Martha’s mother, Elizabeth (Ellen Burstyn), pushes for legal justice that may or may not offer the closure that the family needs.

Labour Pains: When people discuss Kornél Mundruczó’s Pieces of a Woman, the discussion will inevitably be broken into two parts. Most will focus on the film’s first 33 minutes, which takes place entirely on September 17th and follows – in one long, mostly uninterrupted take – the night that Martha goes into labor. The rest of the film, which checks in on the family on and off throughout the ensuing winter and spring, will engender far less chatter.

To be fair, the three quarters of the film that covers October through April isn’t bad per se. The scenes when Burstyn and Kirby are allowed to cut loose emotionally is a testament to both actors’ range and screen presence, but overall, the marital infidelity, court proceedings, and uncomfortable family gatherings are far too familiar and less ambitious than what the film promised with its stunning first act.

Baby Drama: To say that the opening sequence is masterful is an understatement. Dread suffuses the proceedings from the very first moment that Martha complains about the pain of her escalating contractions. The arrival of an unfamiliar mid-wife only serves to increase anxiety. Mundruczó keeps the camera moving constantly throughout these proceedings, creating a jittery sense of anticipation as the warning signs increase. A spot of blood in the bathtub, a hurried change of Martha’s position on the bed, and a brief moment of silence where no baby cries are heard all contribute to the pervasive sense that something terrible is happening.

LaBeouf excels here as a gruff, supportive partner whose attempts at distraction belie a significant concern for his wife and baby. At a pivotal moment, when Eva sneaks out of the bedroom to seemingly consult her notes (never a good sign), Sean follows her and inquires if they should be worried. Parker’s visage, stern but empathetic, briefly cracks when Eva hesitates a beat too long before reassuring him that they should be fine, but that an ambulance may need to be called. The acting, combined with Benjamin Loeb’s cinematography, make every line of dialogue and every facial tic a nerve-fraying viewing experience. 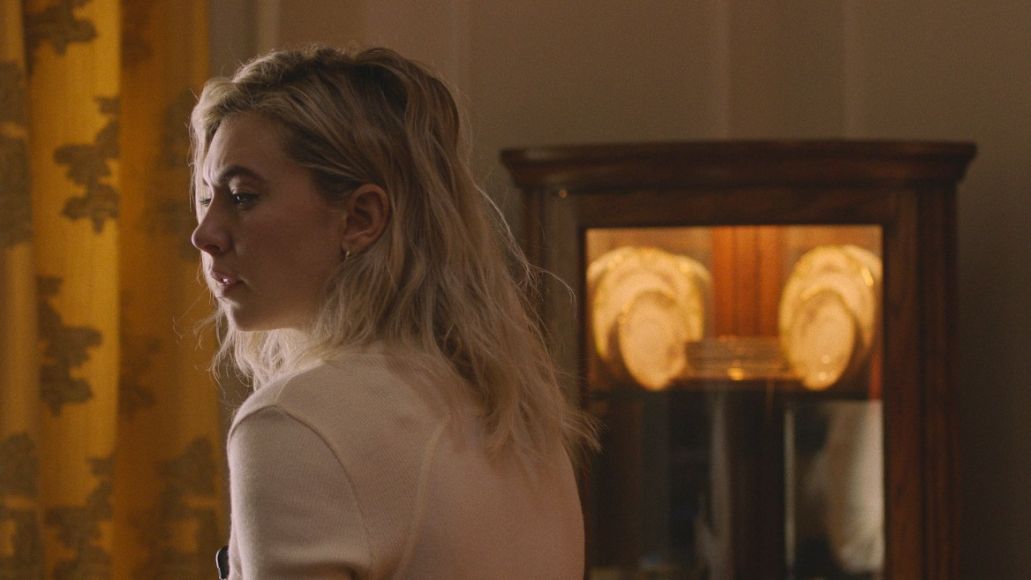 Pieces of a Woman (Netflix)

The Incomparable Vanessa Kirby: Throughout these scenes, however, it’s Kirby who dominates the screen. She sells every reaction and emotion, from the uncontrolled burps to the painful moans to rocking through the pain. Her concern and pain is so palpable that it’s impossible not to share her distress as the minutes tick uncomfortably by in real time.

There’s one brief moment of reprieve, and it’s when Eva orders Martha into a warm bath. As Sean momentarily leaves his wife, Mundruczó slowly creeps into the bathroom to linger on Martha’s outstretched hand, her face blissfully free from pain and nearly euphoric. In these tranquil portraits, Kirby conveys as much about Martha’s emotional state as she does in the louder, more bombastic moments later in the film.

Time Lapse: The rest of Pieces of a Woman never recaptures the heightened emotionality of the first act. Instead Kata Wéber’s screenplay settles into mundane, familiar territory as Sean and Martha bicker and fight with one other.

As the months tick on, Wéber and Mundruczó convey the passage of time in two ways: the change in weather (snow falls, snow melts, buds blossom) and the bridge that Sean was working on is slowly completed. These visual signifiers lack subtlety, in much the same way that Sean’s relapse into drug use and his affair with Martha’s cousin Suzanne (Sarah Snook) feel like cheap melodrama.

The acting, particularly Kirby and Burstyn’s February blow-up at a family dinner, and the chilly, 70s-era visual aesthetic, are all stellar, but the familiarity of the proceedings can’t compare to that stellar opening act. Everything that follows simply feels underwhelming.

The Verdict: Pieces of a Woman offers a superb performance by Vanessa Kirby, and the most unnerving opening of any film in 2020, but the familiar examination of marital disintegration struggles to sustain interest or justify its lengthy runtime.

Where’s It Playing: Pieces of a Woman does not currently have a release date.

Vanessa Kirby and Shia LaBeouf Stand Out In the Shrugworthy Pieces of a Woman: TIFF Review