Lady Gaga’s new music video for “911”, the latest single off Chromatica, just dropped, and it’s packed full of instant classic outfits and weird visuals. From bizarre, spiky horn crowns and masks to Grecian gowns and anklets (which are back, baby, and there’s nothing you can do about it!), Gaga superfans Carrie Wittmer and Emmy Potter are breaking down all the looks.

Here’s every outfit from the “911” video from worst to best. 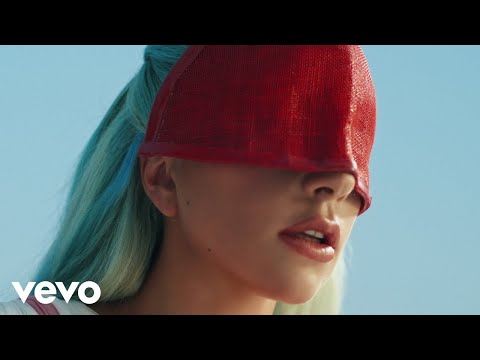 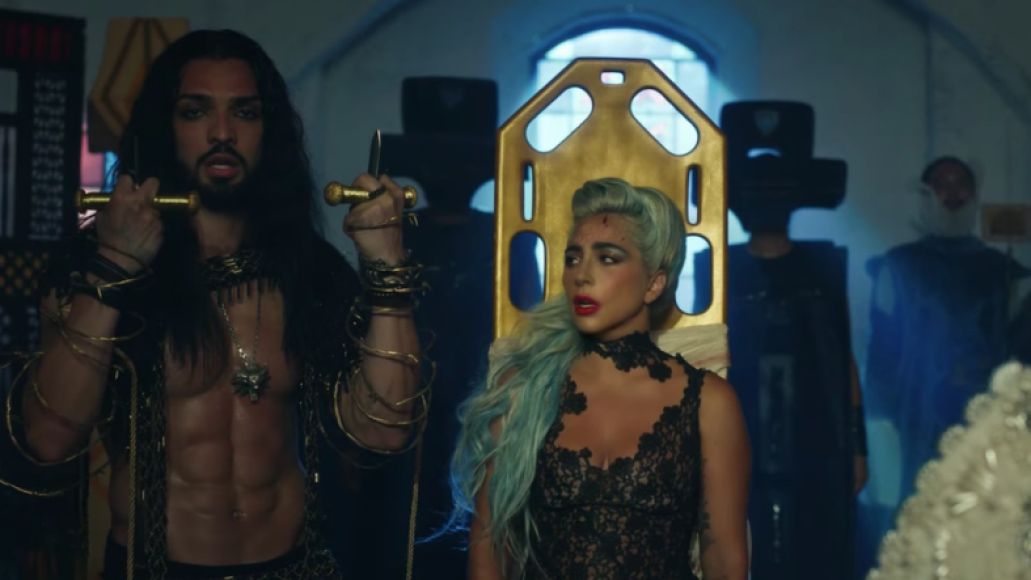 Emmy’s Hot Take: If you look closely, you can see the Chromatica logo on her forehead next to the blood, which is a nice visual touch. It’s Lady Gaga doing Sexy Goth, but it’s too normal, and thus, boring.

Carrie’s Hot Take: This is something I would wear under my little black dress if I was going on a date with Robert Pattinson. Not bad, just cliche. –Carrie

How Lady Gaga Is This Look? You could wear it in Guillermo Del Toro’s Crimson Peak, and it wouldn’t be out of place, which makes it entirely wrong for a Lady Gaga video. 0 out of 10!!! -Emmy 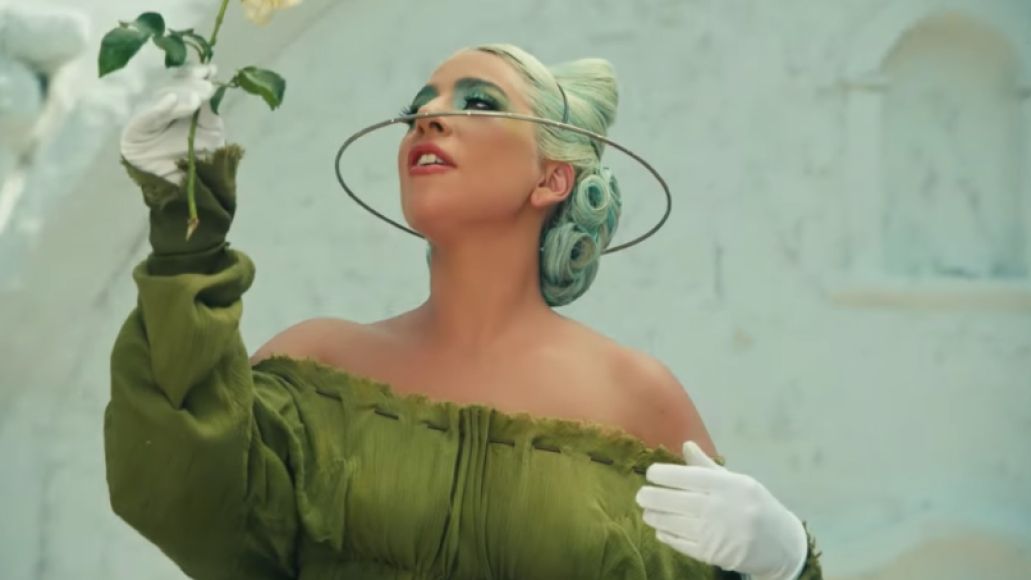 Emmy’s Hot Take: Sorry, Gaga, but Britney Spears has currently cornered the market on peasant tops per her Instagram. I like the color and really love the Jetsons meets Hedy Lamarr headgear, but it’s missing something quintessentially Gaga-esque for me.

Carrie’s Hot Take: I understand what this outfit represents within the context of the video (becoming an angel, I guess?), but it’s a hard pass from me, sweetie. It feels very … community theater production of [insert Greek tragedy here].

How Lady Gaga Is This Look? This look is anti-Lady Gaga and a personal attack on my internal organs. Negative 3,500 out of 10. This sounds mean, but I’m listening to the Little Women 2019 soundtrack as I write this, so I’m in a giving mood. -Carrie

Is This Better Than the “Shallow” Outfit? Ally has an earthiness before becoming a star that matches the earthiness of this outfit, but this green dress would not make me sing “AAAGGGHHH AAGGHH AAAAAAAAAAAGGGGGGGHHHHHHHHH” -Emmy 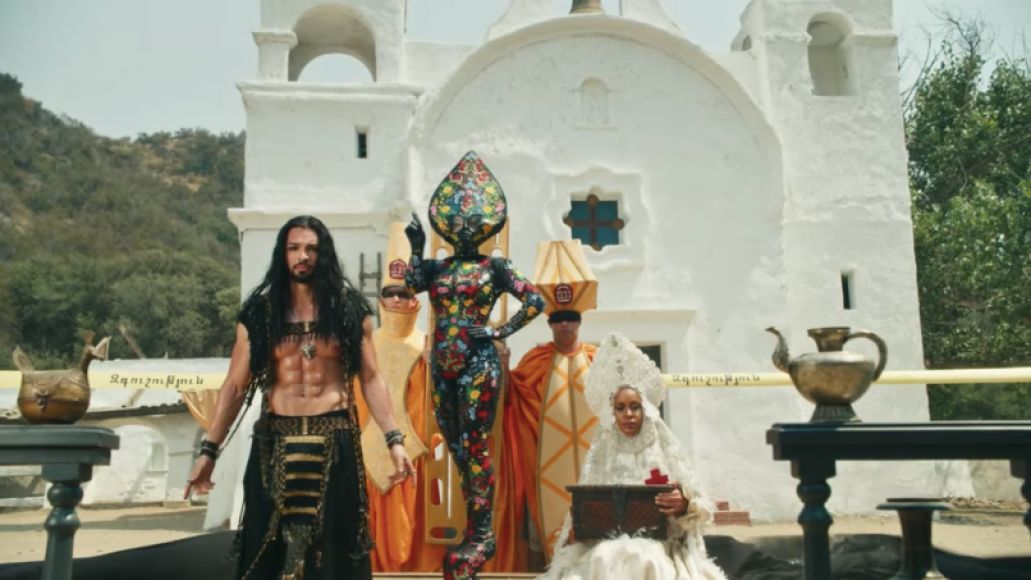 Carrie’s Hot Take: My attraction to black florals is at odds with my style and personality. At first glance, this look was striking, but the more I look at it and think about it, the less impressed I am because it’s so derivative of the Bad Romance Era that it clashes with the rest of the looks in the video. Also, all I can think about is that Lady Gaga probably smelled like an office kitchen right after someone microwaved fish in that thing.

How Lady Gaga Is This Look? It’s so Lady Gaga that it’s working against itself, and for that it gets 5 out of 10. -Carrie

Is This Better Than the “Shallow” Outfit? Everyone knows you must wear leather pants when you become a rock star like Ally does after performing “Shallow” once onstage with Jackson Maine, but you never go full leather unless you want to be extremely hot and sweaty. So no, this is not better than the “Shallow” outfit. -Emmy 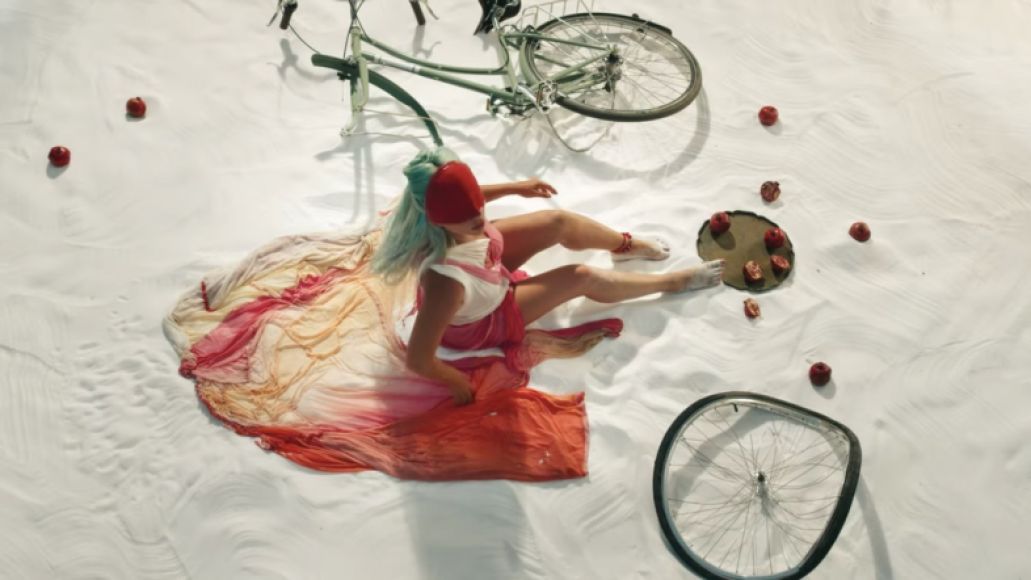 Emmy’s Hot Take: Though her mask is covering the wrong parts of her face per the CDC, this is sexy as hell. She’s gonna get weird tan lines, though!

Carrie’s Hot Take: This is how dramatic I want to look every time I go to the only places I go anymore: the grocery store, The Home Depot, and Popeyes.

How Lady Gaga Is This Look? The construction of the dress itself is tricky and weird, but the overall effect is sexy and dramatic. It’s not as puzzling as some of her early career looks, but it feels Gaga in spirit. Let’s say like, 4 out of 10. -Emmy

04. Grecian Pink and White with Gloves 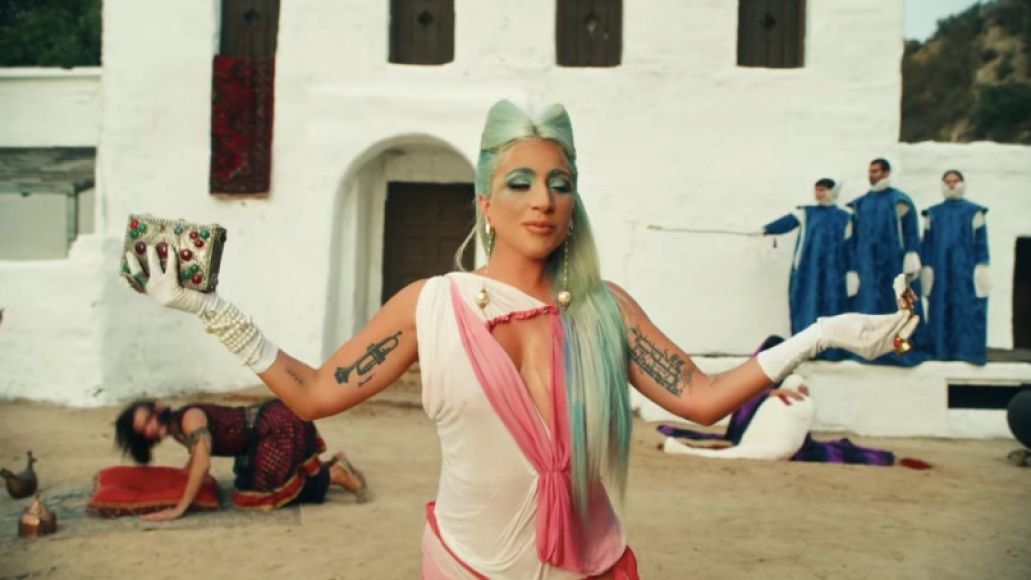 Emmy’s Hot Take: This feels like Lady Gaga doing Miss Piggy with the gloves, pearls, and giant rings. The accessories are pure Muppet elegance, and I mean that as a high compliment! It makes sense that after wearing a Kermit dress early in her career, she’d go the other way and do a Grecian Miss Piggy lewk. The earrings are amazing, and I love how her hair is styled to resemble a fancy bow.

Carrie’s Hot Take: When I was just being born in the early 2000s, I made jewelry that looked like the jewelry I saw on TV shows like The OC. One of the pairs of earrings that I made and wore the most often looked exactly like the earrings Gaga is wearing here, except my pearls were from Michael’s Arts & Crafts.

How Lady Gaga Is This Look? It’s not quite FULL Muppet like the Kermit dress, so I’d have to say maybe a 6. Points for the elegance of it all, though!-Emmy

Is This Better Than the “Shallow” Outfit? Getting close, but no. This is more of a “Hair Body Face” outfit. -Carrie 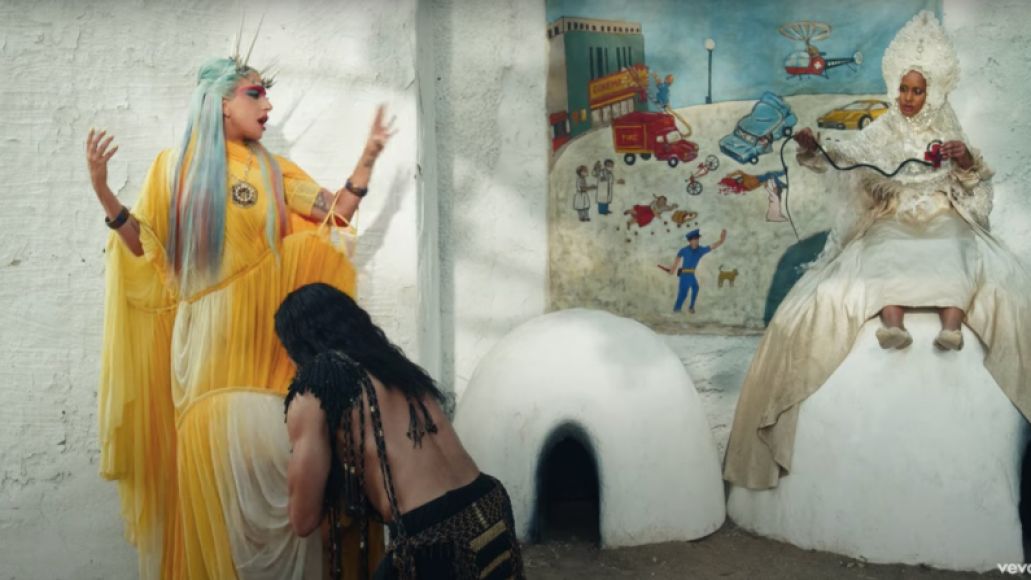 Emmy’s Hot Take: The yellow dress/teal hair combo is stunning, and when you add in the dramatic fuchsia eye makeup and spiky headpiece, it really takes it someplace heavenly for me. Maybe it’s sacrilegious to say, but to quote Depeche Mode, Gaga here looks like MY “own personal Jesus.”

Carrie’s Hot Take: This is Lady Gaga silently screaming, “I don’t care what the plot is; cast me as a Greek goddess in Mamma Mia 3.”

How Lady Gaga Is This Look? As Gaga as a Grecian dress can get. The unexpected combo of yellow looks stunning with the teal hair, plus the spiky horn crown thing (is it acceptable to call it this) transforms it into iconic Gaga. 8 out of 10. -Carrie

Is This Better Than the “Shallow” Outfit? A (fashion) star is born in this outfit that is the color of the sun, which is also literally a star. It is the equivalent of the Ally billboard: instantly iconic but not QUITE as iconic as “Shallow”. -Emmy 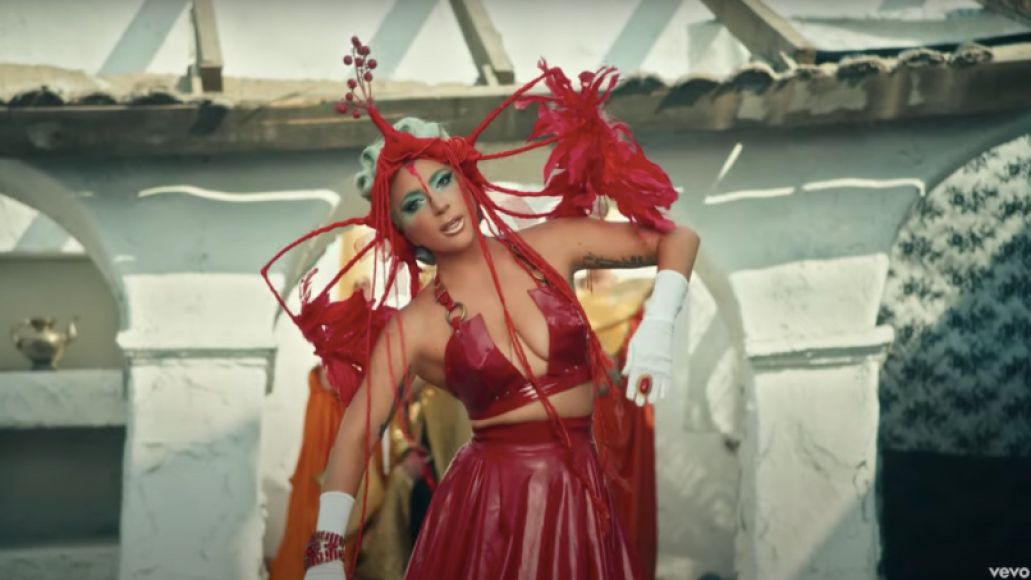 How Lady Gaga Is This Look? This has big “Bad Romance” vibes in the best way, but the bizarro, stringy headpiece with feathers and dead rich-aunt jewelry and gloves take it somewhere new and strange. Definitely a 9. -Emmy

Is This Better Than the “Shallow” Outfit? On its own, no. But yes, because the blue eyeshadow, which I will try to copy one day and end up looking like a James Cameron’s Avatar clown in, gives it a soul. Carrie 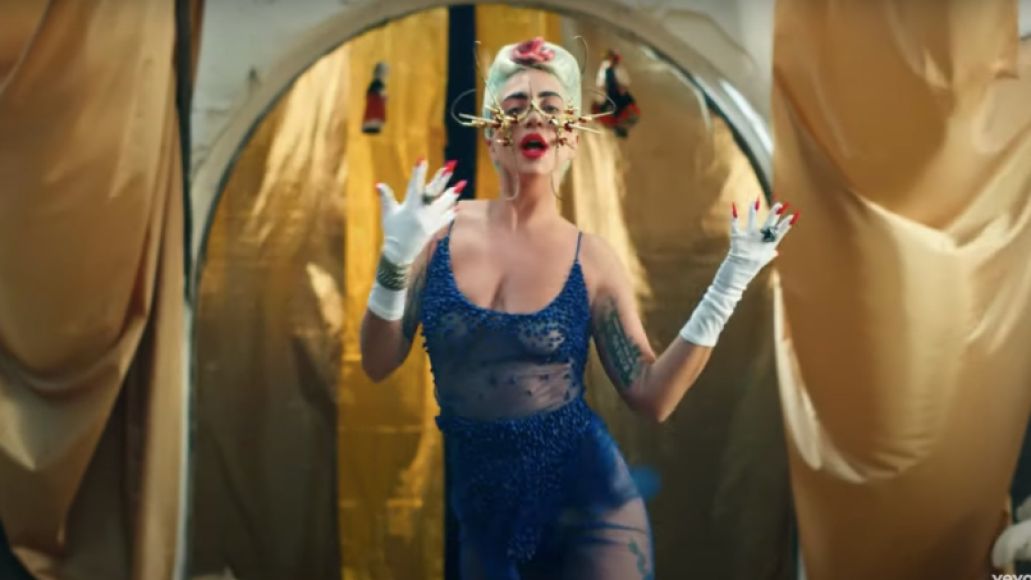 Emmy’s Hot Take: The blue, sheer, beaded dress is simple but gorgeously dramatic when you combine it with the accessories. Great color for her that she doesn’t wear often enough. That spiky gold mask reminds me of the face-hugger from Alien and is exactly what I want to wear to keep men out of my face, which makes it perfect on both counts.

Carrie’s Hot Take: Despite its clear lack of support, I want to wear this outfit (accessories included) when I watch Succession win at the Zoom Emmys on Sunday.

Is This Better Than the “Shallow” Outfit? Yes, but we’re far from the “Shallow” now. This is the equivalent of Ally’s bridge from the song in that it gives me goosebumps, and I won’t stop talking about it for weeks. Thank you, Gaga. -Emmy