The Pitch: On a mysterious virgin planet called Kepler 22-b, a small ship crash-lands, containing two androids and 12 frozen human embryos — a last-ditch chance to kick-start the human race after holy wars and devastation destroyed Earth. Following the programming of their atheistic Creator, Mother (Amanda Collin) and Father (Abubakar Salim) successfully bring six of the embryos to term, and set up a kind of life on the dusty planet, farming potatoes and learning the rational ways of their maker.

But the harshness of the planet, and the androids’ own imperfections as parents, cut the group of children down to one, a young boy named Campion (Winta McGrath), who represents the last of humanity. That is, until an Ark containing Mithraics (religious fanatics who praise a sun god called Soul) arrive in orbit from Earth, in search of a new home for their own. For the Mithraics, including parents Marcus (Travis Fimmel) and Sue (Niamh Algar), it represents a chance to start over. For Mother, whose true nature belies an apocalyptically destructive power, it represents a new crop of children to raise … whether they’re hers or not.

Great Scott: For Ridley Scott, who executive produces and directs the first two episodes, Raised By Wolves feels like the natural extension of the seeds he’s been planting in everything from Blade Runner to Prometheus and Alien: Covenant. If you’re one of the hive (like myself) who views those latter films not as poor Alien movies, but as fascinating ruminations on the nature of artificial life, Raised By Wolves will absolutely fit the bill. It’s less a sci-fi epic than a small, intimate fable set amongst the desolate ruins of mankind’s last gasp.

And in that respect, Raised by Wolves is astounding, ambitious science fiction — the six episodes provided to critics (three of which are available now for HBO Max subscribers) are a slow burn of interpersonal conflicts, internal tragedies, and bursts of horrifying violence. For both the android family and their religious rivals, Kepler 22-b is a canvas on which they can paint all the old grudges they carried back on Earth: more than one set of parents is running from a violent past that follows them to the new planet. 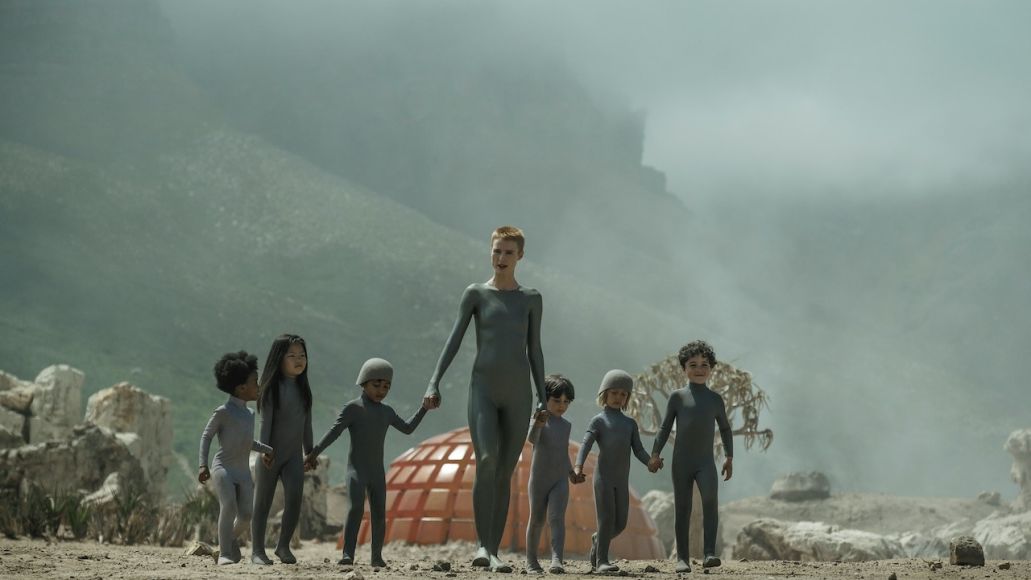 Mother Knows Best: Most fascinatingly of all, Raised By Wolves is a sci-fi parable about the challenges of raising the next generation, and how parenthood forces you to change for the good of your children. At its heart, the show is about two sets of parents — one human, one artificial — running from their violent pasts and attempting to do the right thing for the kids under their charge. Mother and Father’s dynamic is most interesting; Collin and Salim are fascinating performers, imbuing their androids with just enough glimmers of sensitivity and humanity to make their cold, calculating rationality stand out. Salim’s artificial dad is filled with robo-dad jokes and surprising warmth, hiding an insecurity at his inability to protect the children like their mother can (more on that later).

Collin, however, is the breakout star of the show, hiding more layers of performance in a popped forehead vein than some actors can muster in their entire careers. She’s predator and nurturer from line to line, her expressive face constantly straining to maintain the performance of parenthood they’re putting on for their kids while struggling to remember (or in some cases, forget) her true nature. She loves her children deeply, and her programming takes that mandate to stark, terrifying extremes, which even Father struggles to cope with. Throughout the show, she waffles between protagonist and antagonist, protective mother and force of destruction, at the drop of a hat; it can occasionally clash with the tone, if not for Collin’s supreme command of Mother’s chaos. She’s unpredictable in the way many mothers can be, the right application of pressure turning a nurturer into a predator. 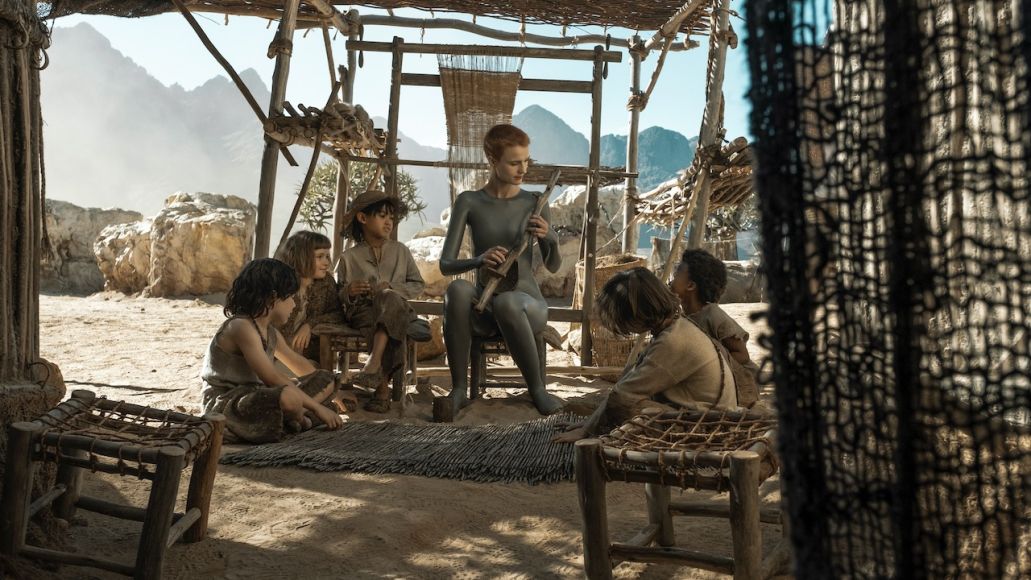 The human side of the equation is less interesting, at least thus far, but the way series creator Aaron Guzikowski imbues the Mithraics with realistic, dogmatic foibles makes for a fascinating parallel with the androids’ similarly blinkered vision of humanity. Marcus and Sue are running from their own problems back on Earth (hint: they may not even be the real Marcus and Sue, or real believers) which complicates the fact that the real Marcus and Sue have a child they have to parent. The children, both biological and stolen, also find plenty of moments to shine, particularly McGrath’s Campion, perhaps the one pure, innocent soul on this damnable planet. But there’s also Felix Jamieson’s Paul, Marcus and Sue’s child who finds himself thrust into Mother and Father’s forced family unit, and Jordan Loughran’s Tempest, a pregnant teenager wrestling with the burden of being impregnated against her will while in cryosleep.

Among these varying dynamics, Guzikowski peppers little morality plays that harmonize with the show’s overwhelming sense of melancholy. Do you carry a child of rape to term, knowing it’s one of the last humans left? Do you kill a native creature, even if it’s dangerous to you and you need to eat? Is it right to lie? Do the sins of the parent revisit themselves upon the children? The way Raised by Wolves elevates these simple questions to Biblical magnitude is genuinely impressive. 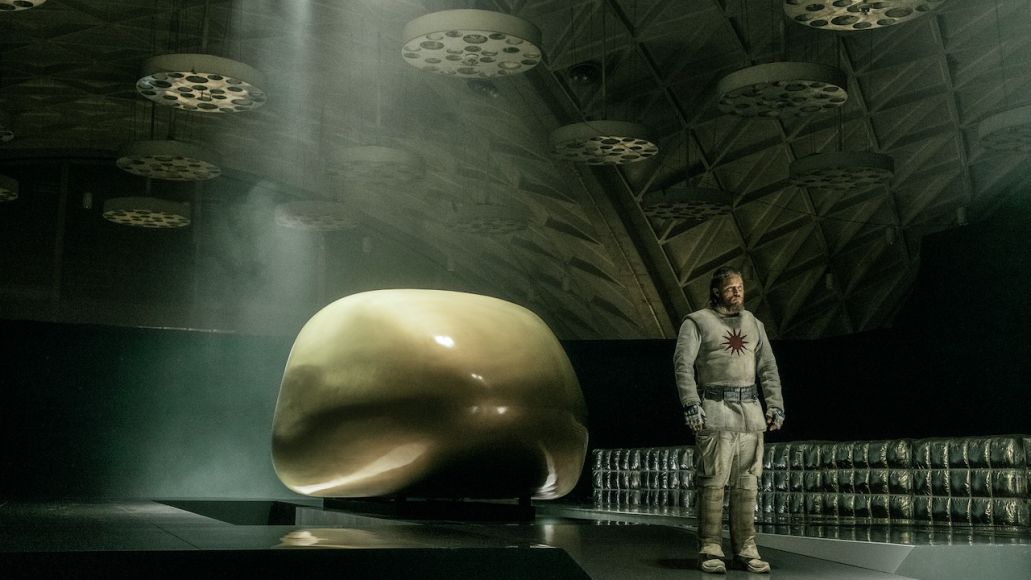 Houses of the Holy: In keeping with Scott’s top-notch understanding of science-fiction landscapes, the production design is ambitious and literally out-of-this-world. The spaceships are curved, minimalist bubbles, and Mother and Father walk around in grey lycra bodysuits that feel ripped right from the cover of a Golden Age sci-fi paperback from the ’60s. When Mother’s true powers are unleashed (she’s a reprogrammed Necromancer, an upgraded model of android who can explode a human body with a scream), she transforms into a bronzed, dead-eyed siren, floating above her prey in Christ-like poses — truly an angel of death. The Mithraics’ outfits, which look like if Grail knights went out for laser tag, make for a novel, inventive way to sell the dogmatic nature of this futuristic army.

Occasionally, Raised by Wolves’ dark-grey aesthetic wears on the eyes; it can be exhausting to look at Kepler 22-b’s overcast deserts and desolate forests for hours on end. But it’s a beautifully bleak backdrop for the show’s richly-textured narrative, flitting occasionally back to Earth to show us how Marcus and Sue got on the Ark or Mother’s first glimpses at her Creator. Guzikowski keeps the narrative moving nicely, doling out bits of exposition here and there along a steady pace so we don’t have to keep up with infodumps and leaving the production design to fill in the gaps for us.

The Verdict: Raised by Wolves is not for everyone, and its shaggy, impressionistic nature can rankle those looking for more accessible science fiction. But in an age where TV seems to be the last bastion for heady, intellectual fables of the intersection of man, nature, and technology, Scott seems to have found an ideal platform for challenging stories like this. Against the arid paradise lost of Kepler-22b, Scott and Guzikowski find ample room to explore the myriad flaws that lie within all of us — our capacity for rage, jealousy, violence, our need to protect the in-group at the expense of the out-group.

Put simply, it’s the purest expression of the classic 1960s science fiction allegories of Clarke, Amisov, and Walter Miller Jr.: show us the inevitable destruction of mankind in the unimaginably far future, and dramatize its last gasps at survival. It may not be for everyone, but if you like your sci-fi more thoughtful than spectacular, Raised by Wolves is ready to scratch that itch.

Where’s It Playing? The first three episodes of Raised by Wolves are huffing and puffing on HBO Max, with new episodes blowing your house down Thursdays.