WandaVision is set to become the first Marvel series to air on Disney+. Today, its first official trailer has arrived.

Taking place after the events of Avengers: Endgame, the new TV series stars Elizabeth Olsen as Wanda Maximoff, a.k.a. the Scarlett Witch, and Paul Bettany as Vision in a sitcom-like manner à la I Love Lucy or The Brady Bunch. The program is said to be a “blend of classic television and the Marvel Cinematic Universe,” and follows “the two super-powered beings living idealized suburban lives” — that is, until they suspect that all is not what it seems (which makes sense since, ya know, Vision is dead).

We see a bit of that mystery unravel in this first trailer. After a charming introduction to Wanda and Vision’s vanilla suburbia — filmed through a retro black-and-white lens, of course — a pivotal dinner threatens to shatter their cozy existence.

While the intricacies of the strange plot are kept obscured, the clip does offers a few noteworthy reveals. For one, we get our first look at Teyonah Parris as a grown-up Monica Rambeau (the kid from Captain Marvel), who makes a shocking and confounding debut. We’re also given an introduction to Kathryn Hahn’s character, credited simply as a “nosy neighbor.” Though nothing is made explicit in the trailer, there are plenty of hints that seem to confirm Hahn is playing Agatha Harkness, a witch who trains Wanda. If she’s not Harkness, Marvel certainly knows how to misdirect their fans with that Halloween costume.

Marvel’s head honcho Kevin Feige gave credence to theories about Harkness’ introduction in WandaVision when he said the series would focus on Wanda becoming Scarlet Witch. In an interview with Collider late last year, he said,

“[We have] the opportunity to… show more of what Wanda can do, more of what makes Vision Vision, and most importantly reveal a name that I’m not even sure we’ve said in the MCU yet, but we make a big deal of in the show… that Wanda is the Scarlet Witch. And what does that mean, that she is the Scarlet Witch? That’s what we play into … in ways that are entirely fun, entirely funny, somewhat scary, and will have repercussions for the entire future of Phase 4 of the MCU.”

The WandaVision cast is rounded out by Kat Dennings and Randall Park, who both reprise their MCU roles of Darcy Lewis and Agent Jimmy Woo, respectively. Jac Schaeffer, who penned Captain Marvel, is serving as showrunner. The series is expected to hit Disney+ sometime in late 2020.

That release date likely puts it ahead of The Falcon and Winter Soldier, originally slated for an August debut. That show got held up by the pandemic, but recently re-entered production. The six-episode Loki mini-series is also expected in 2021. Last week, Marvel revealed they’d hired Orphan Black star Tatiana Maslany to headline the She-Hulk series from director Kat Coiro. Other shows on the docket include Hawkeye, Moon Knight, Ms. Marvel, and the animated What If…. They’re all coming to Disney+, so make sure you sign up for the platform here. 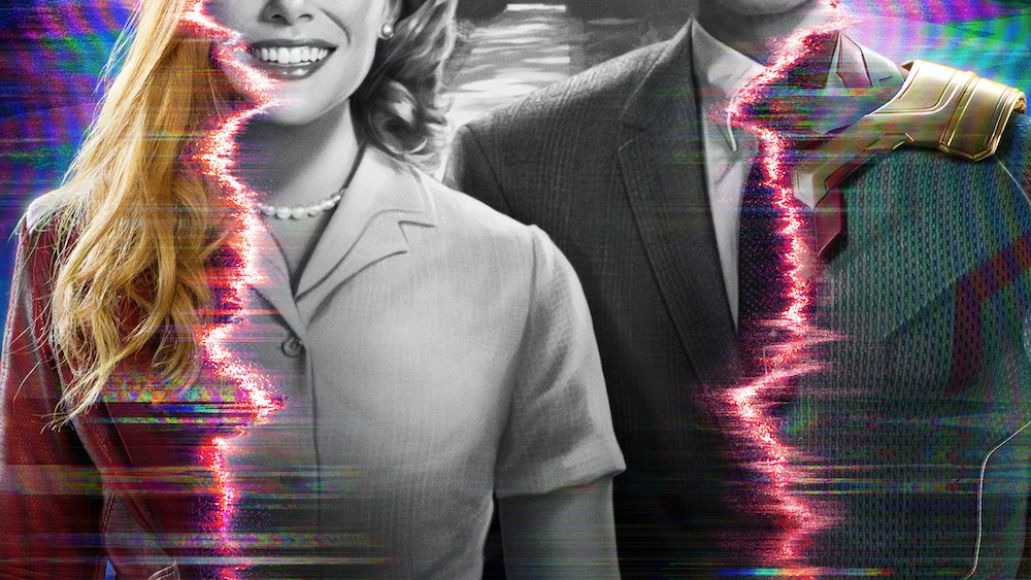 Suburban Secrets Lurk in the First Trailer for WandaVision: Watch