Metallica have unveiled a new batch of their Blackened whiskey created using soundwaves from their 2019 “S&M2” concerts with the San Francisco Symphony. Batch 106 was aged for eight-plus years before being finished in casks that were blasted with a 17-song playlist from Metallica’s S&M2 live album — a process called “Black Noise sonic-enhancement.”

Metallica’s Blackened whiskey began as a collaboration between the late master distiller Dave Pickerell in 2018. The original batch also utilized soundwaves from Metallica’s catalog of music. The whiskey is processed at Sweet Amber Distillery Co., which also handled Batch 106 under the care of master distiller/blender Rob Dietrich.

“The S&M2 performances were a challenge for us,” lead guitarist Kirk Hammett said in a press release. “The first S&M shows in 1999 were such a pivotal part of Metallica’s evolution. We knew we had to mark their 20th anniversary on an even bigger scale, but without sacrificing any of the intimacy of those shows. The reaction has been incredible, to the shows and the album, and we’re thrilled to be able to bring those same S&M2 vibes to Blackened.”

Literally, the black brandy casks vibrated with the sound of S&M2, “pummeled with the low hertz frequencies” as the press release describes it. In theory, this extracts more flavors from the wood and improves the flavor. To think that your whiskey was “listening” to S&M2 is also a neat concept. It’s made with the essence of Metallica.

“The insane energy that exuded from both the fans and performers is unforgettable,” said Dietrich, who attended both nights of the S&M2 concerts last year. “It’s amazing to bring that spirit and passion to Blackened.”

Batch 106 will be sold in-store and online in a commemorative box designed by longtime Metallica graphics guru Squindo. There will also be a contest for a limited edition T-shirt featuring Squindo’s S&M2 artwork.

And for those with an ambitious thirst, Sweet Amber Distillery will also be rolling out cask strength versions of Blackened at 110.7 proof in select markets in Kentucky and Florida. Taken from Batch 106, these mark the first editions of the whiskey in cask strength, which means it was undiluted in the distilling process and is therefore higher proof.

Metallica’s “S&M2” concerts were recently turned into a home release, including a deluxe box set. For more on the whiskey, visit the Blackened Whiskey website and purchase some via Caskers. Check out the bottle and box design below. 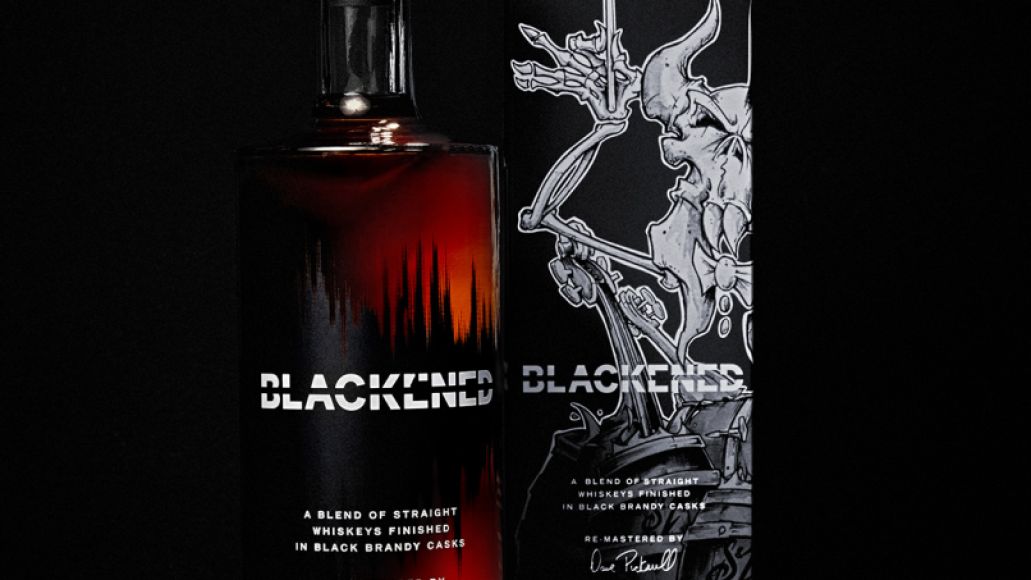