The Pitch: It’s South Park! And they’re covering current events again! In a year where there’s been more news-per-square-inch than anyone can handle, not even the show’s “Six Days to Air” approach can cover it. So instead, Trey Parker, Matt Stone, and their collaborators have birthed a one-hour special to cover (among other topics): COVID-19, police brutality, lockdowns, wildfires, protests, Zoom meetings, mental breakdowns, Donald Trump, the Build-A-Bear Workshop, and an avalanche of the other developments, big and small, that have consumed our lives in 2020.

“The Pandemic Special” tackles these events in a characteristically meta fashion. Randy Marsh sells a “pandemic special” strain of his famed Tegridy Weed, only to panic when he realizes that he might be the cause of the outbreak. At the same time, the children of South Park return to school, where a pack of recently-downsized policemen strain to teach their new pupils math and finger-painting. Things become dicey for all involved when the kids and cops are forced to quarantine together, and Stan in particular can’t handle it. What follows is the kind of rabbling insanity you’d expect from this series, even in its 24th season.

Stache Hash: Historically, South Park has two modes: Zany absurdist comedy or timely social commentary. At its best, the series blends the two together, but sometimes it’s most enjoyable when the series dispenses with the messages and just goes for some transgressive goofball shenanigans.

Despite the COVID trappings at play, Randy’s story here veers much more toward South Park’s wackier side. It’s hard to glean much substance from the absurd notion that Randy unwittingly caused the pandemic when he joined Mickey Mouse in fornicating with a Wuhan pangolin (during the events of last season’s “Band in China” no less). It’s even loonier that he tries to cure the virus by ejaculating into the pot he sells, based on the theory that since his DNA started the outbreak, maybe it can stop it too. And the absurdity reaches another level when everyone who smokes his marijuana ends up with a Randy-style mustache.

It’s not South Park’s funniest storyline ever, but regardless of the current setting, it’s the type of bizarre adventure that plays like a throwback to the show’s earliest days. Over the years, Randy has slowly taken more of the spotlight from the kids, and while that comes with various pros and cons, he works well as a vehicle for the show’s most outsized comic setups, which is all his corner of the special is really there for. 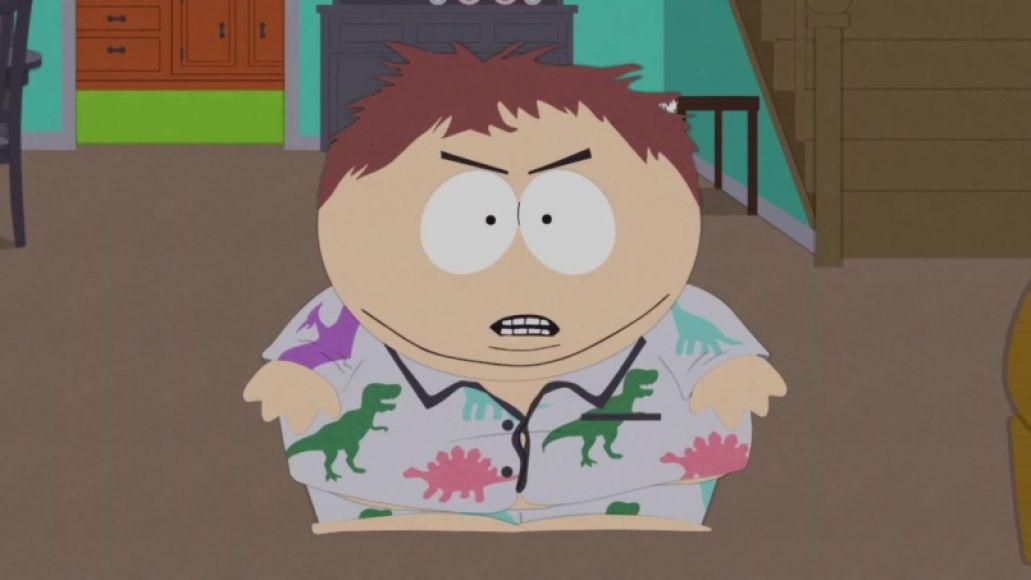 The Gilded Cage: If there’s one citizen of South Park who acts true to form here, it’s Eric Cartman. Leave it to him to see self-quarantining as a blissful wonderland, one where he doesn’t have to say “Screw you guys, I’m going home” because he’s constantly at home already. Cartman exalts at being able to bluff his way out of school via phony technical issues and to keep everyone else (including his mother) six feet away at all times with his handy dandy pole. For the conniving little shut-in, this is paradise.

That is, until, the school reopens and he’s forced to leave the slothful comforts of home once more. His real life pig noises when cops wrestle him back into his seat are an amusing touch (and callback), and his ode to social distancing may be the comic highlight of the episode. Cartman’s role in the episode dwindles as Randy’s escapades and the elementary school kerfuffle take hold, but he still makes a great stand-in for the sort of folks who would revel in the lockdown rather than see it as a challenge or a burden. 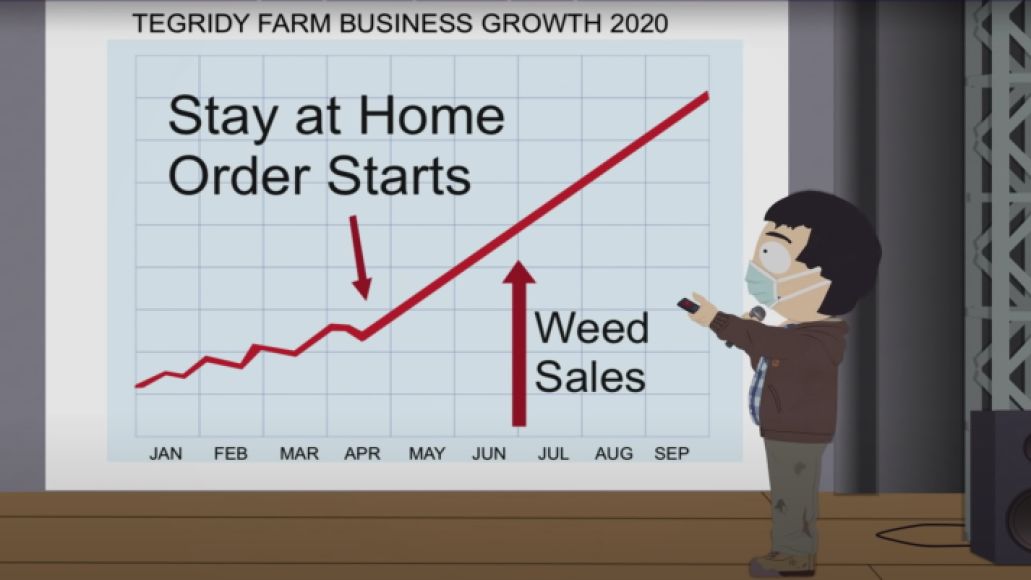 Chin Diaper the Vote: Of course, “The Pandemic Special” isn’t all outlandish Randy adventures or ridiculous Cartman antics. Matt, Trey, and company still pack in the sort of social critique you’d expect amid all the usual tomfoolery. There’s plenty of internecine conflicts among the South Park faithful over who’s masking and social distancing properly, and who’s treating their face coverings like a useless “chin diaper.” That finger-pointing escalates when national treasures like Red Robin and Applebees shut down and the town goes into a panic after a crop of young “super spreaders” escape.

Along the way, “The Pandemic Special” also covers police brutality in a superficial but still pointed way. It depicts the town’s officers responding to every problem with gunfire (winging Token in the process) even after they’ve been defunded and forced to become teachers. When the mayor grants them all their old military equipment back in the guise of “school supplies,” they start indiscriminately mowing down 10-year-olds (including Kenny, naturally), without recourse or provocation. The special barely touches the racial angle to all of this — the crux of the long overdue movement that’s emerged — but it’s not exactly shy about criticizing the police either. 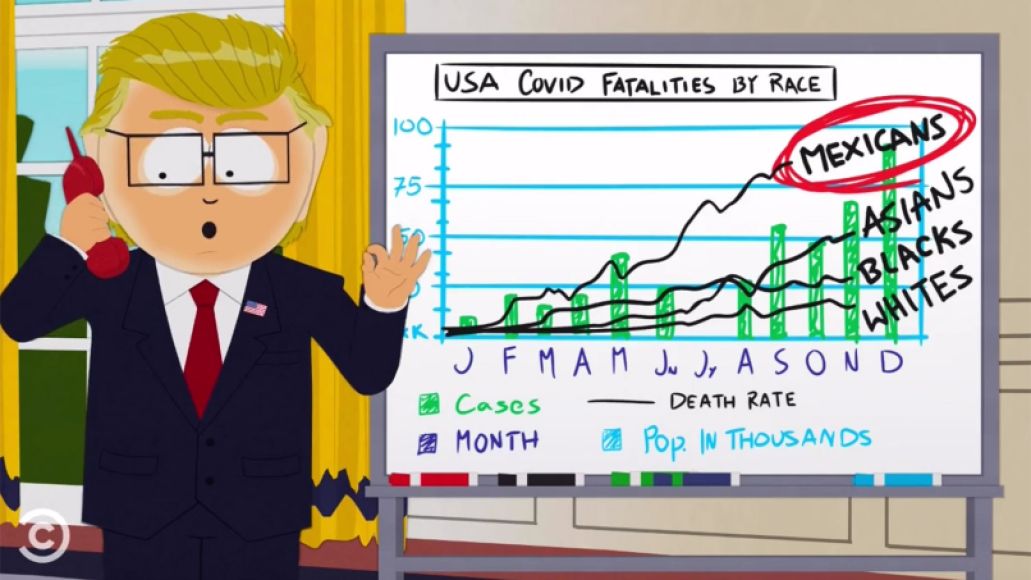 Still, the special reserves its most direct ire for the man in the White House. South Park bashes Trump in the same way it has for years — via Mr. Garrison. The episode depicts him as proudly and “actively doing nothing” about COVID because he thinks it’s the best way to not only keep his campaign promises but to kill as many of his base’s undesirables as possible, regardless of who else becomes collateral damage.

If that weren’t direct enough, the special’s closing moments show that even Randy and Cartman — who represent the peak of idiocy and self-interest in South Park respectively — recognize that the greater good should prevail over their immediate wants under the circumstances. Immediately afterward, though, Garrison-as-Trump takes a flame-thrower to the world’s best hope for a cure, extending the pandemic indefinitely and inadvertently causing the rash of wildfires. He then tells the audience to go vote, with the implication that if they don’t, they’ll get more of this wanton cruelty. It’s as damning and direct an indictment of Trump as the show’s ever done and quite the turn from the series’s ambivalence about going to the polls in 2004’s “Douche and Turd”. 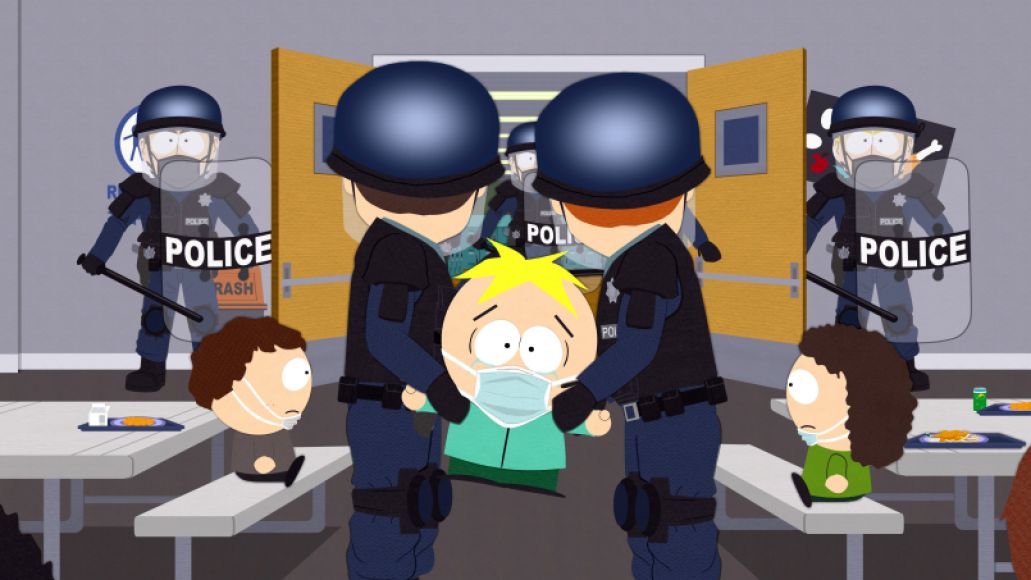 The Verdict: Despite the raft of transgressive silliness that permeates “The Pandemic Special”, there’s an unassuming earnest streak that runs through it as well. As the lockdown wears on and the deathly threats seem to multiply daily, Stan projects his own struggles and anxieties onto Butters. He eventually decides to break his towheaded friend out of quarantine in a lost cause effort to take him to Build-A-Bear, just like Butters’ parents promised him before COVID hit.

But it’s a failed gesture, one that ultimately brings Stan to a breaking point and a confession that he’s the one having a hard time with this. As strong as Stan thinks he is, the longer these events wear on and snowball into one another, the harder it is on him. He admits that he feels his own body “shutting down” in the midst of these daily hardships, that he has no idea when things will get back to normal, and that this lingering sense of indefinite dread has grown impossibly difficult for him, even though he has trouble admitting it. That type of anxiety is personified by the Grim Reaper himself, who ominously scoots around on a tricycle and looms over even the goofiest events of the episode. 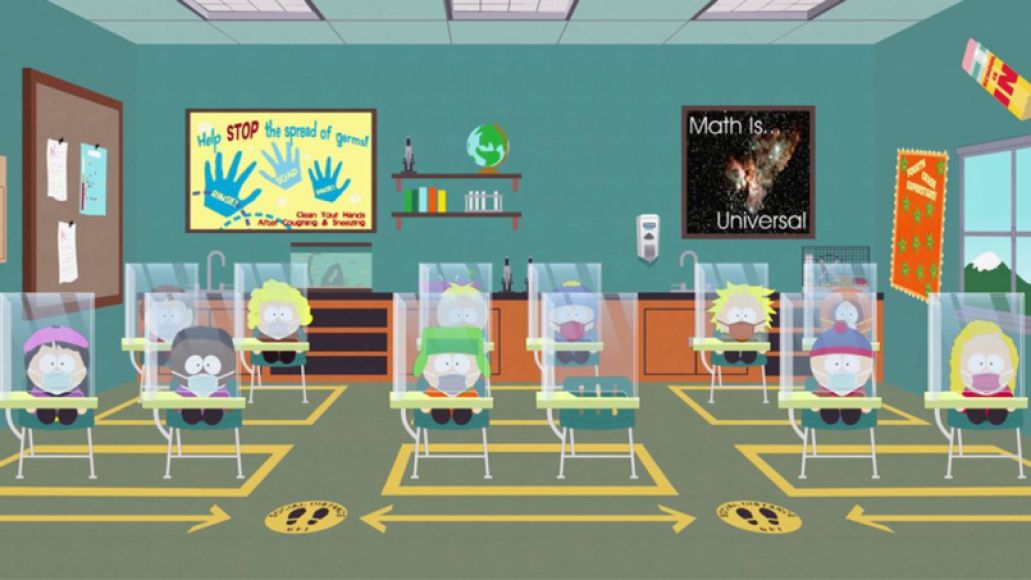 There’s something genuine and relatable there, as folks from all walks of life struggle with the mental impact of … well … everything that’s going on right now. It’s an unexpectedly honest moment from South Park, one that sums up the bad days and bad thoughts nearly all of us have contended with during this “unprecedented time,” in a refreshingly un-ironic fashion.

Even with that, “The Pandemic Special” is unlikely to become anyone’s new favorite episode of South Park. Randy’s adventures are fine but nothing truly new. Cartman’s homebody preservationism is amusing but slight. And the social commentary at play here is entertaining, but not exactly revolutionary. What’s novel, though, is that sort of sincerity and vulnerability coming from the show’s usual mouthpiece, echoing what we’re all going through right now. There’s a particular resonance to that at the present moment, especially when a series that can otherwise project the sense of being “above it all” is admitting that this hurts.

Sharon Marsh may be right. We may not need a pandemic special from South Park right now. But between its openness about the slow-burn mental impact of accumulating hardships, and its frankness about those at the top doing too much to hurt and too little to help, I’m still glad it’s there.

Where’s It Playing? “The Pandemic Special” is available to stream on southpark.cc.com for cable subscribers as well as on HBO Max on Thursday at 8 p.m. ET / 7 p.m. CT.