Like everyone else in the world, the BTS boys are at home — and how lucky we are that they’ve invited us in to join them for a while. The members of the groundbreaking pop septet (RM, Jin, SUGA, J-Hope, Jimin, V, and Jungkook) have spent the past seven years exploring genre, pondering mental health and the pressures of youth in an increasingly confusing modern world, and undergoing multiple metamorphoses, shattering preconceived notions of what exactly an international pop band can look like in the process.

BE is the group’s fifth official full-length studio album, and, sitting at just eight tracks, is their shortest record by far. It’s also their second album this year and arrived with noticeably less promotional fanfare than its predecessor, February’s Map of the Soul: 7. In a press conference in the hours leading up to the album release, the group underscored the message they’ve been emphasizing for weeks: this album is a love letter to their treasured fans, for their fans, and largely about their fans. If Map of the Soul: 7 was the group’s expansive, at times self-interrogating pop opus, and August’s earth-shaking “Dynamite” was an unexpected explosion of joy that launched the group to their first No. 1 on the Billboard charts, BE is the cozy comedown. It brings the listener home in every sense, inviting us into the world of these seven young men in a way none of their other albums have so far.

This isn’t to say that BE is the acoustic, exclusively instrumental album the brief promotional materials may have indicated (the first concept photo showed the boys removing formalwear in place of pajama sets, surrounded by analogue instruments). Rest assured: the album has its bops. But the string that tethers the tracks together is the idea that despite the group’s (and the world’s) collective frustration, sadness, restlessness, and fear, life goes on.

The Good: BE sets itself apart from the band’s discography beginning with the hands-on approach the individual members took to its creation. While, in the past, the boys have all certainly contributed countless lyrics (RM still holds the most credits among the members) and many full songs (with SUGA and J-Hope regularly putting on producer hats), this album fulfills the group’s dream of having a hand in a piece of work from start to finish.

The album is home to various songwriting credits for every member, along with winks to their careers throughout. The inclusion of “Skit” as track four is multi-layered: in the early days of BTS, the boys, bubbling with youthful energy, would settle around a microphone, joke around, tease one another, or sometimes even follow a script, then tuck the resulting recording into their next EP or album under the title “Skit”. This time, though, they settle around a microphone, the sound of rain falling outside, as they breathlessly unpack the fact that they have just secured the No. 1 spot on the Billboard charts. It’s a surreal reminder, both for the band and for the listeners, of just how far they’ve come.

The first subunit song, “Fly to My Room”, brings vocalists Jimin and V together with rappers SUGA and J-Hope on a slow, steady groove that rests comfortably under a keyboard and electric organ. “This room is too small to contain my dreams,” SUGA laments relatably before going on to say, “Somehow there’s no joy, no sadness, no emotion/ It’s just me here.” For a song with a whimsical, almost romantic title, “Fly to My Room” surprises by holding up a mirror to the frustration inextricably woven through this time of global stagnancy. For BTS fans more drawn to ballads, V is here to croon on the lullaby-adjacent “Blue & Grey”. Later, the bouncier “Telepathy” is powered by a walking baseline, synths, and electric production — it’s practically already choreographed itself for a live performance. Jungkook subtly echoes his melody from past solo track “My Time” as he kicks off the bridge with a flourish. “Every single day/ I am the happiest when I meet you,” they assure the listener on the chorus.

The second subunit song, “Stay”, features well-matched vocals from Jin and Jungkook, interspersed with verses from RM, and feels akin to past staples from the group like “DNA”, “So What”, and the more recent “Moon”. “Stay” cascades into “Dynamite”, which closes out the album in a moment that feels like a delightful, conclusive payoff. “Dynamite” remains pop perfection, in case anyone was worried.

Here’s the thing, though: the cleverly styled “Dis-ease” blows just about everything else out of the water. It’s a retro jam. It’s a summer cookout. It has perhaps the best pop pre-chorus of the year, and the group’s hookiest melodies this side of “Boy with Luv”. It’s got J-Hope written all over it, straight from the boy who often feels like he tumbled out of the mid-’90s with his bright beats, flair for style, earworm phrasing, and unparalleled charisma as a dancer. Whenever BTS brings in a horn section, the sun simply shines a little brighter. There’s a breakdown in the bridge of “Dis-ease” that caused me to break down as well. “One for the laugh, two for the show,” they say — 400 for the number of times I’ll have listened to this track before the end of the week. Put this song in the credits of a coming-of-age film. Put this song as the pre-encore closer of the setlist when BTS is able to tour again. Put this song together with the choreography it deserves and fly the boys directly to the Grammy’s stage. It’s wonderful.

The Bad: “Life Goes On” is a lovely song, with an even lovelier video (directed thoughtfully and intimately by the group’s golden youngest, Jungkook). Jimin lends his uniquely ethereal tone to a characteristically stunning vocal performance. “Life Goes On” was set up with a nearly impossible task, though: following “Dynamite”. As the album’s lead single, all eyes were on this track at midnight. It captures the theme of the record beautifully, but it may have been a bit of a risk to lead with a song more akin to the introspective “Spring Day” than the brassy “ON” or the inviting “Boy with Luv”. There’s a chance that the quieter track gets overshadowed within the group’s expansive discography.

Again, this album is noticeably slimmer than any other BTS record. Perhaps the exclusion of solo songs was intentional, as this collection is more about just that — the collective — than their other records, but additional subunits (a K-Pop term for songs that include just a few of the members instead of the whole group), interludes, and solo songs are missed.

The Verdict: The Bangtan Boys accomplish exactly what they set out to do with this album: bring comfort to their listeners and remind people around the world that they are not alone in their experiences. Ultimately, this is what BTS has always done best — used their music as a conduit for their message: that loving ourselves through difficult times can be an act of bravery; that it’s okay, even understandable, to feel frustrated, angry, sad, and lost when things otherwise understood as constants get torn away; and that the heaviest loads feel a little lighter when shared with others. It’s a 2020 album that reminds us that, at the end of the day, it is enough to simply be.

Essential Tracks: “Dis-ease”, “Dynamite”, and “Fly to My Room”

Pick up a copy of BE here… 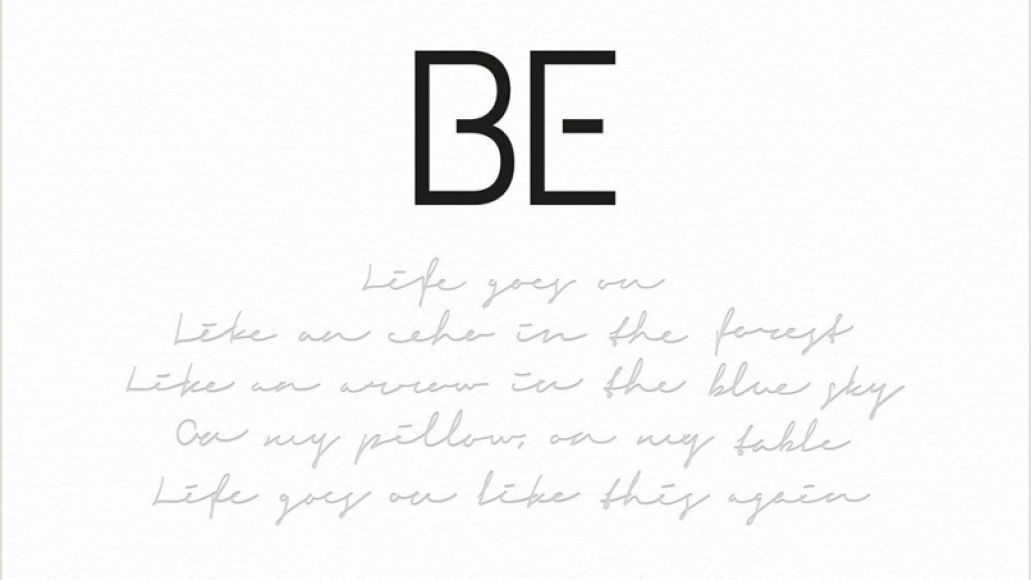 BTS' BE Comforts Listeners with the Hopeful Message That Life Goes On: Review