“Mining Metal” is a monthly column from Heavy Consequence writers Joseph Schafer and Langdon Hickman. The focus is on noteworthy new music emerging from the non-mainstream metal scene, highlighting releases from small and independent labels — or even releases from unsigned acts.

This is the eighth Mining Metal introduction essay that I’ve had to write during the COVID-19 pandemic, and to be honest with you, dear readers, I’m running out of even vaguely optimistic spins to ladle onto our monthly roundup of underground metal’s finest riffs.

I guess I could say – at least we know who will lead our nation next year, right?

How’s this: when we began this column, we anticipated it being a monthly reprieve from the ravages of reality, and now that seems like a more valuable use of our time than almost anything else. It’s likely going to be a troublesome holiday season for many of us, and if these tunes can offer you some comfort, please take with without hesitation or reservation.

At least, metal offers for some a sort of imaginative training ground for trying times. Soundscapes to imagined apocalypses can prep our faculties for real-life catastrophes — and metal excels at this task. To that end, this month offers a whole lot of particularly grim music, including a premiere by one of Australia’s most vicious contemporary death metal bands. — Joseph Schafer

Aussie technical death dealers Depravity have made more than a few impressive accomplishments in only four years as a band. Their debut album, 2018’s Evil Upheaval turned heads with its sharp, speedy strikes, and this year’s follow-up, Grand Malevolence, offers many of the same charms. What separates Depravity from their peers is the relative catchiness of their music. While brutal death metal often eschews distinct choruses or hooks, songs like “Hallucination Aflame,” premiering below, invite listeners to screech along with vocalist Jamie Kay. This might be the most listenable death metal record I’ve heard since Suicide Silence’s No Time to Bleed, and if they get the chance to tour the States, Depravity might convert some of Suicide Silence’s fans to their own horde. Buy it on Bandcamp. – Joseph Schafer 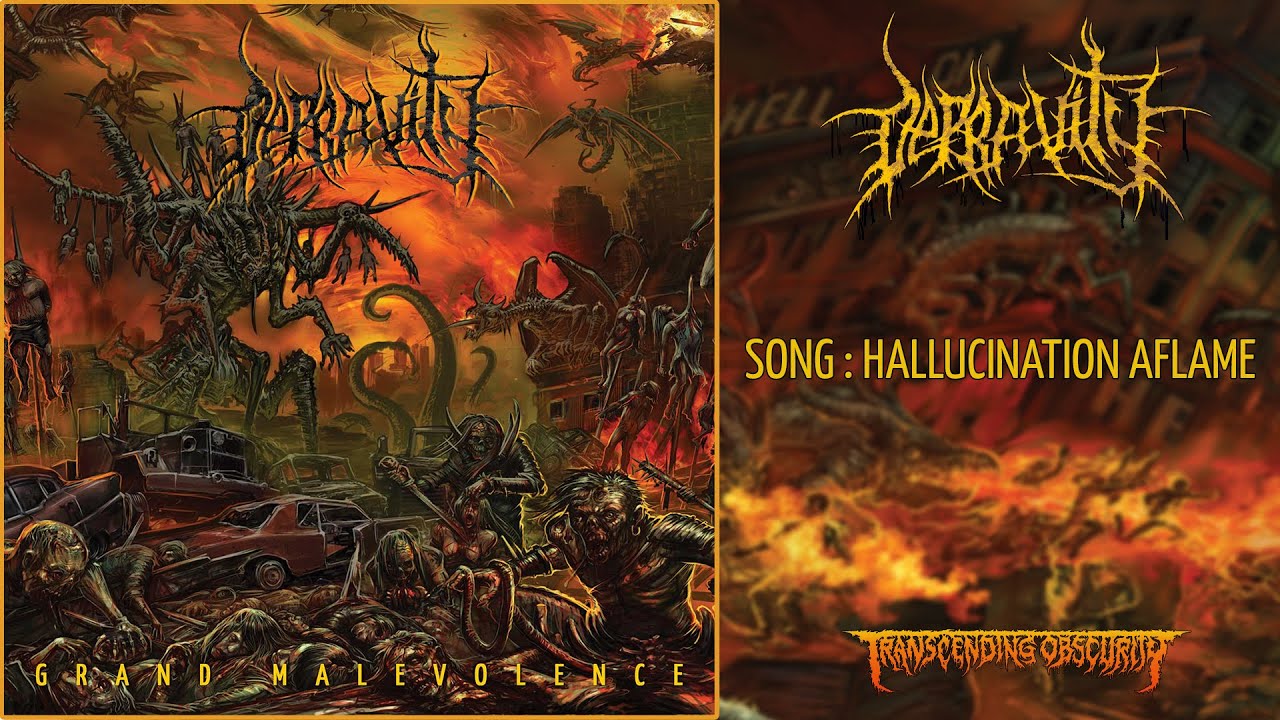 It is always worth revisiting Dark Quarterer on the increasingly rare moments when they release new music. Their approach to progressive metal is one that seems obvious given that their debut came in the late 80s within the same magical window that gave us peak Queensrÿche and that magical first run of Fates Warning. The songs here on Pompei, of course a concept album, are lengthy, winding and theatrical and with more than their fair share of Deep Purple sprinkled over them. The weight of influence this band would have on later European prog metal, from the power scene to former death/black metallers turning to the style to the underground king Ayreon, is palpable across this disc. It may be 2020, but Dark Quarterer are still the protoform for so much. And check those jazz flourishes! Hail to the masters. Buy it on Bandcamp. — Langdon Hickman

Texan true metal heavyweights Eternal Champion helped presage the modern revival of esoteric old school metal with their 2016 debut, The Armor of Ire, which they’ve resolutely kept off of Spotify and other large streaming services. That relative (slight) inaccessibility has only cultivated the band’s for-those-in-the-know appeal and stoked the enthusiasm for this month’s follow-up, Ravening Iron. Improbably, their second fantasy epic more than fulfills the promises of the first, with indelible choruses and serious swagger. Though they primarily draw from the same Manila road and Cirith Ungol records as their contemporaries, there’s a knuckle-dusting aggression unique to Eternal Champion’s music – Vocalist Jason Tarpey also fronts Texan crossover legends Iron Age, and guitarist Blake Ibanez also riffs in a little band you may have heard of called Power Trip (drummer Arthur Rizk is also that band’s producer, and one of the most in-demand studio bosses in metal right now). Listen to a song like “Skullseeker” and dare to resist the urge to bring a broadsword into the pit with you. Buy it on Bandcamp. – Joseph Schafer

Liturgy – Origin of the Alimonies

The best way to conceive of Liturgy is not, as we were told, a black metal band but instead an experimental music group, one that incorporates shards of extreme metal just as much as shards of electronic music, avant-garde jazz, contemporary orchestral music and the like. Origin of the Alimonies, an opera that mastermind Hunter Hunt-Hendrix has been hinting towards and outlining conceptual material for through most of her previous records under not just Liturgy but other names, is admittedly messier and less solidly realized than her previous masterful glitch prog-black metal record HAQQ but the added orchestral layers and more traditional avant-garde textures and approaches feel undeniably exciting and fruitful. There are stretches that call to mind Toby Driver’s equally harebrained genius work, certainly a flattering comparison if there is one to be made. Best of all: it’s exciting, riveting stuff, one where you might not understand the lyrics sheet but you can certainly follow the emotionally-transparent bursts of soundcolor. Buy it on Bandcamp. — Langdon Hickman

A fact for you: Fuck the Facts is the greatest grind band to ever exist. There is a reason, after all, why Napalm Death’s album-of-the-year caliber record this year nodded to them in its opening track. Gone are the blitzkrieg hardcore-driven sense of clipped pace many grind bands measure themselves by. Instead, songs unfurl, feeling like nasty industrial waste one moment, cosmic and cerebral prog the next, street level and feral hardcore breaking into a symphonic black metal sweep before a sludgy breakdown. Fuck the Facts are the greatest of all time because they can do anything at any time and make all of it work together, always. This isn’t just songcraft. This is black magic. And, oh my God, I am so, so happy they are back after a miserable fucking year. Buy it on Bandcamp. – Langdon Hickman

With a name like Megaton Sword and an album title like Blood Hails Steel – Steel Hails Fire, could Megaton Sword be anything other than an epic metal throwback? This Swiss quartet make their fortress in the nerdiest lyrical and visual realms but extend an open invitation for anyone to join the feats of their victory. Hyper-memorable and extra-wordy is the order of the day, as maybe best exemplified on the chorus of “Verene”. Manowar wishes they still wrote songs this fun. More impressively, as assured and dialed-in as these songs are, this is their debut record. Until they return for another quest, join me in singing along to their songs of victory. Buy it on Bandcamp. – Joseph Schafer

Stormkeep arrive like the perfect hybrid between Falls of Rauros, Havukruunu and Immortal, delivering vast spans of arctic terrain riddled with burned trees and lurking orcs and decaying battlements. The songs on Galdrum skew toward the longer end, not a surprise given that it is a project by Isaac Faulk, known for bands as big as Blood Incantation and Wayfarer and as small as funeral doom band Abysmal Dimensions and avant-black metal group Lykotonon. The through line is a progressive rock attitude toward the various genre spaces in which he operates, wielded here as a way to smooth out the occasional sonic inconsistencies in the type of arboreal/fantastical black metal that would give rise in part to neo-folk and dungeon synth. These pieces play out, much like early Enslaved, like a lo-fi corpse painted Genesis or Jethro Tull, feeling more in touch with the majesty and heavy metal glory of Bathory than the decrepit darkness of Mayhem. Buy it from Van Records. – Langdon Hickman

In a year positively overstuffed with proficient and punky old school death metal records, it’s bold for anyone to drop another slice of Autopsy-worship and polka beats. But Copenhagen’s Undergang aren’t just any death dealers, and no assessment of the year’s guttural cornucopia is complete without a listen to their fifth full length, Aldrig I livet (translated: never in my life). Prolific songwriters and absolute road-dogs, Undergang haven’t gone a year without putting out music or touring since 2009, and as seasoned vets their sound is pretty dialed-in at this point: groovy, slimy riffs and vocalist/guitarist David Bluch Mikkelsen’s lower-than-low gurgles swirling underneath it all. Perfect to listen to while turning giblets into gravy for Thanksgiving dinner. Buy it on Bandcamp. – Joseph Schafer