Despite all of the turbulence that 2020 brought with it, many music lovers found major reprieve in The Weeknd. The Canadian crooner (aka Abel Tesfaye) released his fourth studio album, After Hours, in March, which garnered a slew of critical acclaim. Consequence of Sound gave it high marks and placed it on our year-end albums list while other publications heaped similar praise. However, no one could have anticipated how the artist would go on to provide so many of the best — and most entertaining — moments of the year.

From breaking Billboard records to taking on the Grammys, here are 10 times The Weeknd blew us away in 2020.

“Blinding Lights” Breaks All the Records

Although it was released at the end of 2019 as the second single from After Hours, “Blinding Lights” was one of the most monumental moments of 2020. It became the longest-running Top 5 and Top 10 record on Billboard’s Hot 100 chart, was the most streamed song of the year on Spotify, and accumulated 4.5 billion streams worldwide. The nostalgic ’80s throwback feel of “Blinding Lights”, combined with The Weeknd’s dulcet and hypnotizing vocals, makes it irresistible ear candy. Despite its airy and lighthearted nature, in a September cover story for Esquire, the singer confessed the song has a slightly sinister undertone. “’Blinding Lights’ [is about] how you want to see someone at night, and you’re intoxicated, and you’re driving to this person and you’re driving to this person and you’re just blinded by streetlights.”

Of course media blows things out of proportion and takes things out of context. Usher is a King and always an inspiration so it was flattering to hear what him and Diplo did on climax. XO https://t.co/GdLX4xD58a

It’s no secret that The Weeknd has transformed the genre of R&B with his macabre lyricism and chilling melodies. The singer opened up to Variety in April that when he heard Usher’s 2012 hit single “Climax”, he felt that it was a ‘Weeknd song.’ “I knew I was doing something right, but I also got angry,” he told the publication. “But the older I got, I realized it’s a good thing.” Diplo, the co-producer of “Climax”, chimed in to share that The Weeknd’s debut mixtape, House of Balloons, inspired its production — but not before Usher took to Instagram to film himself singing the song. He never directly addressed The Weeknd in his post, but that didn’t stop the star from clarifying his previous statements. “Of course media blows things out of proportion,” he said on Twitter. “Usher is a King.”

The Weeknd has always been a fan of the television show American Dad, so when he had the chance to be a guest star on the series, he seized the opportunity. His catalogue is known for describing his sexual escapades with explicit detail. However, The Weeknd used this particular opportunity to poke fun at his persona in the episode “A Starboy is Born”. Not only did he voice his character, but he co-wrote the episode and the song featured in it revealing the secret that he is, in fact, a virgin. “Never once been touched,” The Weeknd sang. “The power of God in my loins.”

Following the murder of George Floyd at the hands of a white police officer in May, the cultural discourse zeroed in on the prevalence of racism, police brutality, and the subsequent protests shortly after his death. While celebrities and brands immediately took to social media to post faux statements of solidarity, The Weeknd went on Instagram to share his receipts from donating half a million dollars to Black Lives Matter Global Network, the Colin Kaepernick Know Your Rights Camp Legal Defense Initiative, and National Bail Out. His statement didn’t stop there. At August’s MTV Video Music Awards, he used his acceptance speech for Best R&B to speak out on social issues with a brief yet potent statement: “It’s really hard for me to celebrate right now and enjoy this moment, so I’m just gonna say justice for Jacob Blake and justice for Breonna Taylor. Thank you.”

TIME Names The Weeknd One of Its 100 Most Influential People 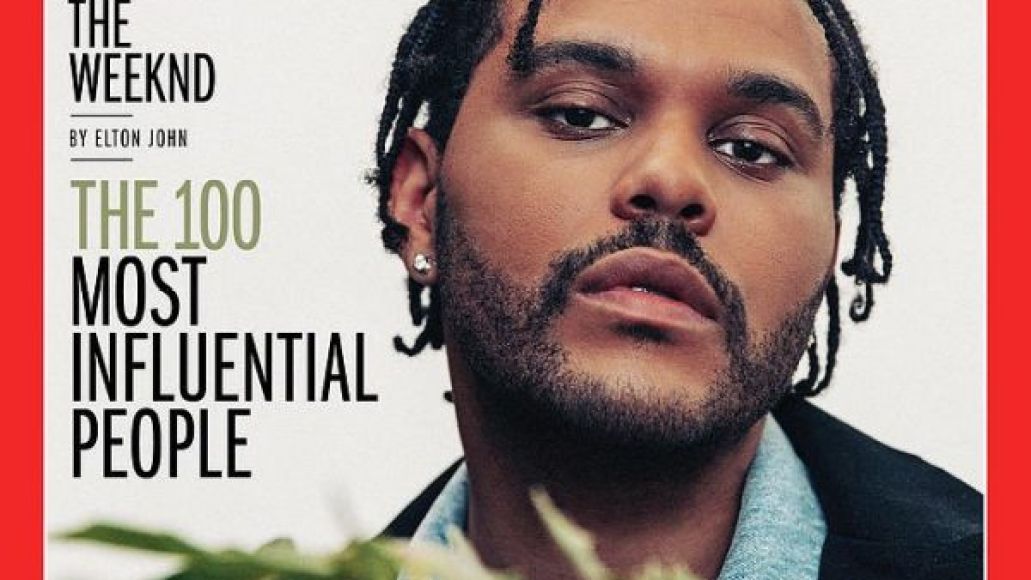 Elton John has influenced the careers of countless musicians, and The Weeknd is no exception. He sampled John’s classic track “Your Song” on “Scared to Live”, which is featured on After Hours. Not only did John declare his love for the singer, but he also penned an essay for TIME gushing about how “Blinding Lights” is 2020’s best pop single, The Weeknd has an infinite imagination, and how he’s following in the footsteps of one of the greats. “Like Prince, he marches to his own beat,” John wrote. “That’s an exemplary way for an artist to be.”