The Lowdown: In an unprecedented year, 2020 has managed to surprise us yet again with a highly anticipated album from Cleveland’s master of mood rap, Kid Cudi. As one of the godfathers of emo-rap, Cudi has been an open book with well-publicized battles with drug addiction, depression, anxiety, and bouts with loneliness. His superpower as an artist is the ability to lay bare his emotional state, whatever it may be at the moment, as a conduit for his artistic expressions to flow through. As a result, his influence looms large over hip-hop as an early progenitor of so much of the melodious/emo-rap sensibilities that presently dominate the genre today. Now, Cudi makes his welcome return with Man on the Moon III: The Chosen, the third and final installment of his epic triad series, which began more than a decade ago and follows 2009’s Man on the Moon: The End of the Day and Man on the Moon: The Legend of Mr. Rager (2010). At the tail end of a strange year, finding Cudi once again captaining this thrilling journey somehow feels like a callback to hope and a sense of normalcy.

The Good: From beginning to end, The Chosen is a masterful body of work that penetrates the very fabric of the soul. Conceptually, it pits Cudi in an ongoing, internal struggle against his evil alter ego, Mr. Rager, with the intention of finding the peace, serenity, and true happiness that’s been eluding him. Spanning 18 tracks, the album features appearances from the late Pop Smoke, Skepta, Phoebe Bridgers, and Trippie Redd. On the production side, the lush soundscapes are provided by Cudi along with Dot da Genius, who are also the executive producers. Additionally, Plain Pat, Emile Haynie, and Mike Dean, all of whom made significant contributions to the previous two Man on the Moon albums, return here, and the synergy is evident throughout the project.

The infectious and melodic “Sad People” captures Cudi at his very best. Questioning anything, everything, and even himself, he says: “In the dead of the night, I have these dreams/ What’ll happen to me? Will I burn out?/ Have I been wrong? What does it mean?/ All these things, can’t understand why.” He continues on the gripping chorus: “Yeah, baby, see you’re back in my zone/ Just what I need, mama (Yeah)/ Ni**a been in hell, the same road/ On a mission and I’m gonna fly high (High)/ This for the sad people who keep the blunt burning in me/ Up on a journey, learning.” Without losing any momentum on any song, The Chosen invites the listener on a ride filled to the brim with top-notch songwriting, raw emotionality, and a spirit of perseverance that couldn’t be more timely.

The Bad: The Chosen leaves “no stone unturned” as the old colloquialism goes, but that could also be one of its drawbacks. Running well over an hour, Cudi serves up a full-course buffet to an audience with à la carte listening capacity. Also, with such a daunting amount of music to consume, The Chosen suffers from redundancy here and there. Sonically, the production bangs and is crisp, but some of the tracks mirror each other too close in sound and texture. The synth-laden production motif curates a futuristic vibe, albeit a safe one. While Cudi’s songwriting is profoundly experimental, the production often settles for familiar formulas found in the hip-hop scene today.

The Verdict: With Man on the Moon III: The Chosen, Kid Cudi brings a fitting conclusion to a captivating adventure of a troubled but promising kid who eventually grows into a man. The Man on the Moon trilogy is an ambitious saga, and the final act embodies the frailty and triumphs of the human experience. Cudi does more than just muse over his misery; he revels in the power of defying the gravity of every existential threat that attempts to keep him down. He survives and thrives. Throughout the journey of the Man on the Moon trilogy, which is imbued with many twists and turns, The Chosen captures Cudi as victorious, finally reaching his long-awaited destination.

Essential Tracks: “Tequila Shots”, “She Know This”, and “Sad People”

Pick up a copy of Man on the Moon III: The Chosen here…

Man on the Moon III: The Chosen Artwork 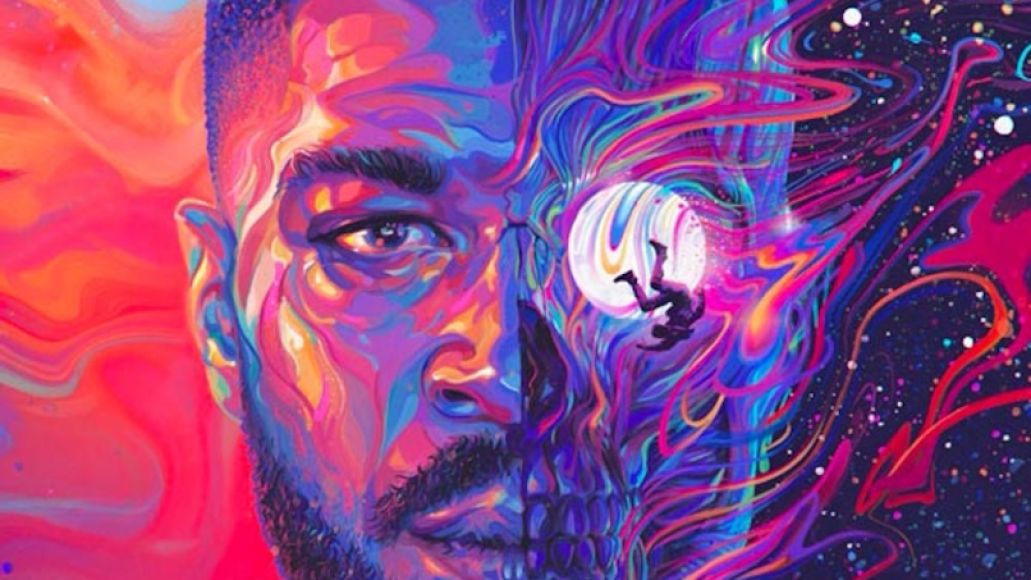 Kid Cudi Defies Gravity One Last Time on Man on the Moon III: The Chosen: Review