Death Angel performed two streaming shows at San Francisco’s The Great Northern to keep their holiday tradition alive. Our reporter/photographer Raymond Ahner was one of the few people allowed inside the venue, and provided us with the review and photo gallery below.

Setting the Stage: Inspired by The Beatles, who, in their early days, played a series of shows in London during the Christmas holidays, Bay Area thrash-metal heroes Death Angel also have a long-running tradition of Christmas shows. For the past several years, the band has played a pair of always sold-out gigs at Slim’s in San Francisco. With Slim’s recently shuttered for good and live music currently on hold, it looked like 2020 may have been the year where that tradition was finally broken. But Death Angel has another tradition, a tradition of resilience. Not letting the current state of affairs stop them, the band played two streaming shows presented by Club Closed, and filmed at The Great Northern, a club just blocks away from Slim’s.

Taking the Stage: Opening show number one of their seventh annual “Another Death Angel Christmas Shows” with “Humanicide”, the band wasted no time shaking off any rust that may have settled in after not playing live for almost nine months. Although Death Angel have always been a band that feeds off the energy of the crowd, playing to just the cameras did not phase them in the least, as they thrashed their way through classics “Seemingly Endless Time” and “Mistress of Pain.

With all the lights and production of a “normal” show and visuals projected behind them, it was business as usual for the band. Guitarists Rob Cavestany and Ted Aguilar traded riffs as effortlessly as usual, with the rhythm section of Damien Sisson on bass and Will Carroll (who survived a serious battle with COVID-19 earlier this year) on drums, kept the music as heavy as always.

Taking a moment to welcome all the fans who were streaming from around the globe and thanking them for watching, vocalist Mark Osegueda encouraged everyone to grab a drink, move the furniture out of the way, and safely join in on the annual celebration of Bay Area thrash metal. The band then played “Absence of Light” off of the Relentless Retribution for the first time ever, and going forward they simply let the music do the talking, with the 1-2-3 punch of “The Pack”, “River of Rapture”, and “Aggressor”. Wrapping up night one with a blistering version of “The Moth”, Osegueda thanked everyone again, and let them know that we will all get through this together. 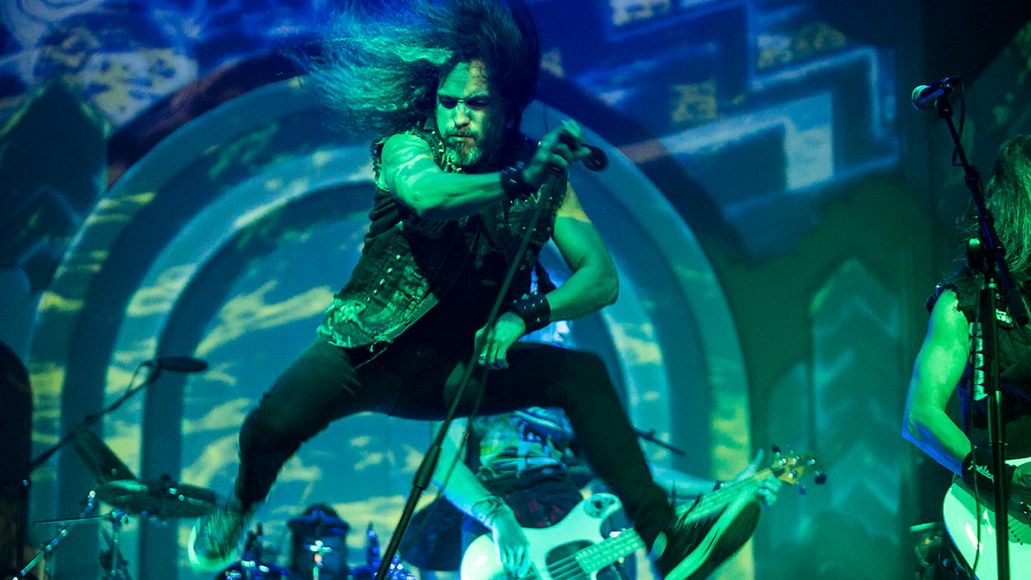 Show number two was a matinee affair, so that the fans around the world could tune in at a decent hour. Death Angel kicked it off with “Humanicide” once again, but from there they mixed it up, playing “Voracious Souls”, “Son of the Morning” and “Immortal Behated”, before Mark once again sincerely thanked everyone for joining in.

Of course, no Death Angel holiday show would be complete without a Christmas song, and this year’s selection for both nights was Bing Crosby’s “I’ll Be Home for Christmas”, complete with purple Santa hats, pounding drums, and crunching guitars. The band seemed to be genuinely having fun up there, even without an audience.

Another tradition kept alive this year was the band’s annual cover of a Beatles song, and this year they brought in long time Bay Area guitarist Bryan Kehoe (who was appropriately dressed in a Santa costume) for a psychedelic cover of “Tomorrow Never Knows”, complete with a liquid light show projected behind them. Kehoe brought the song to a whole new level, and in keeping with everything that’s happened in 2020, it was the perfect “WTF?” moment.

With the future of venues, concerts, and festivals currently unknown at this point, Death Angel showed that the world still needs live music, and provided hope that one day things will return to normal.

Missed Death Angel’s Christmas shows? You’re in luck. Both concerts are available on demand for 72 hours from their initial broadcast. Pick up tickets here, and see our exclusive photos and the setlists below. 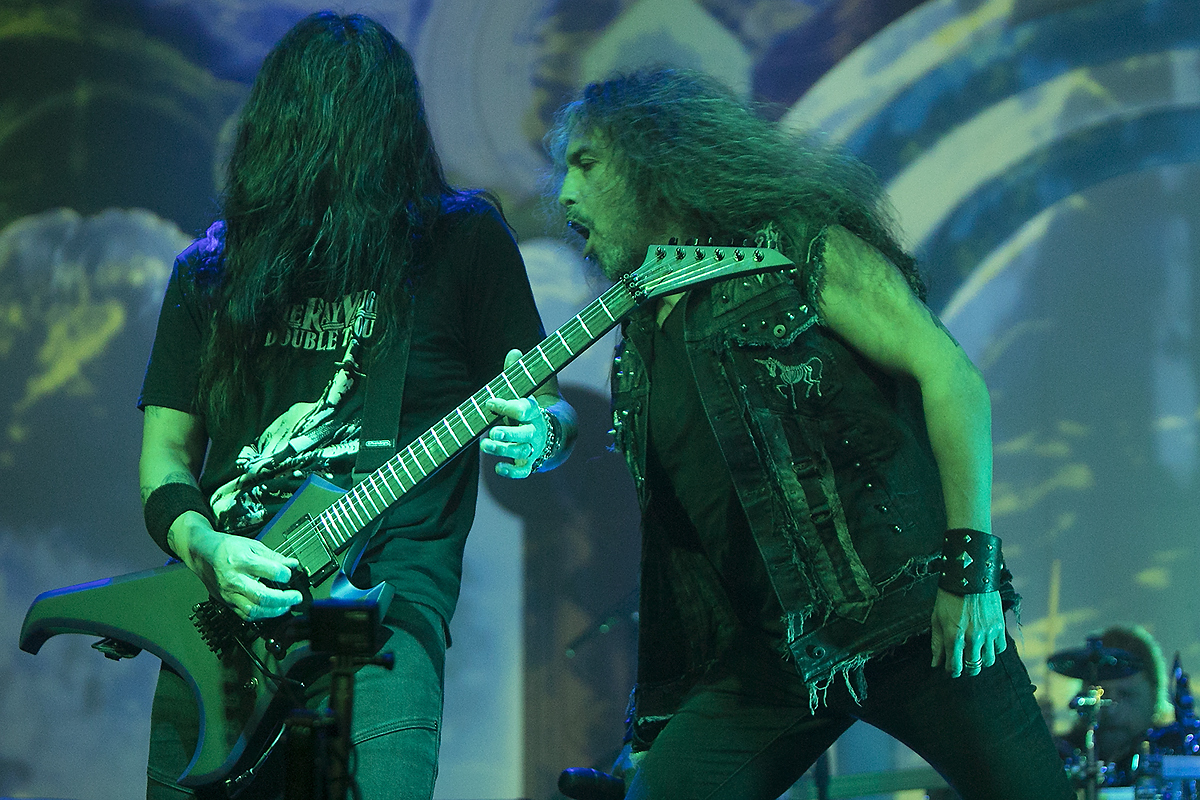 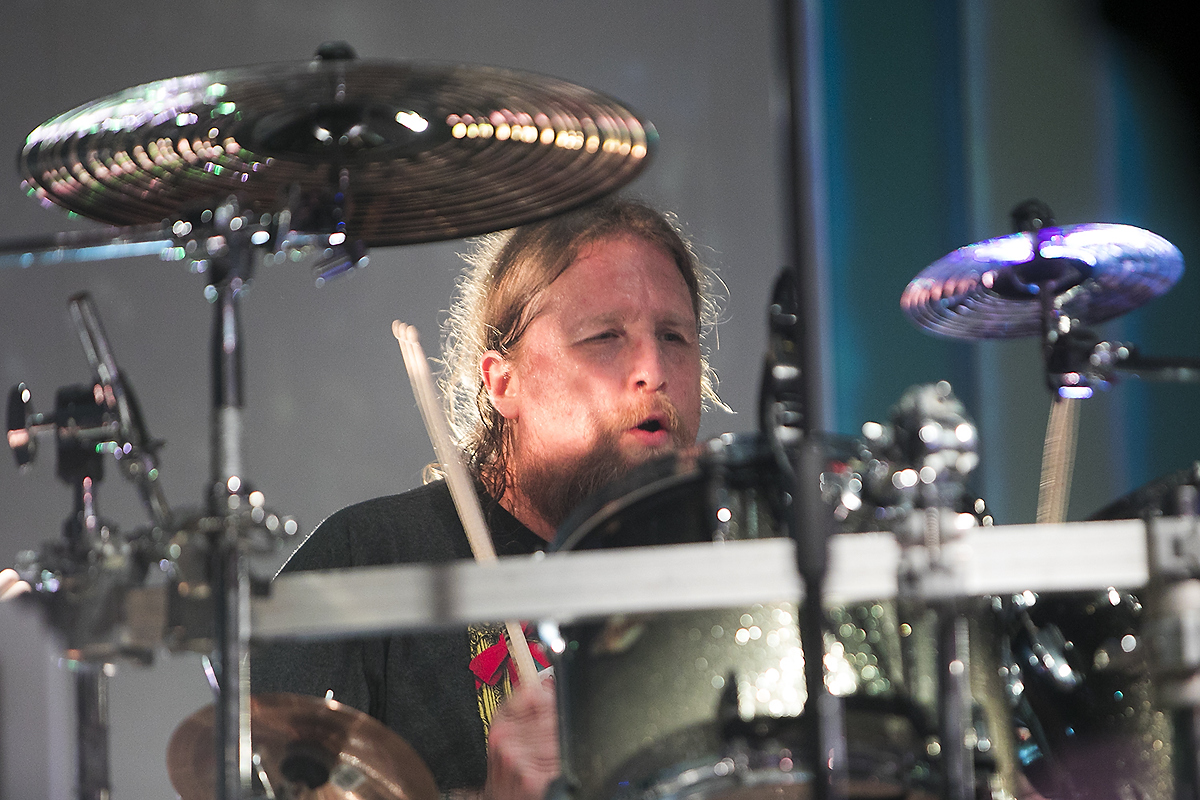 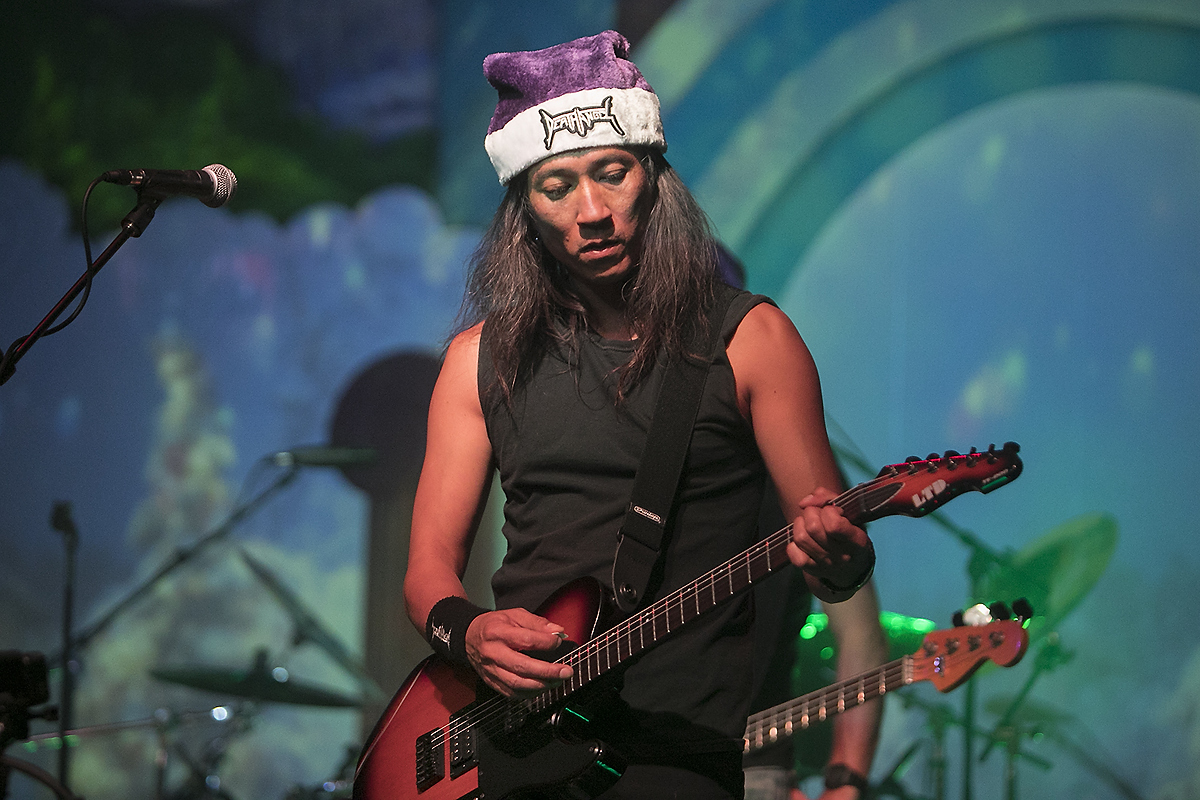 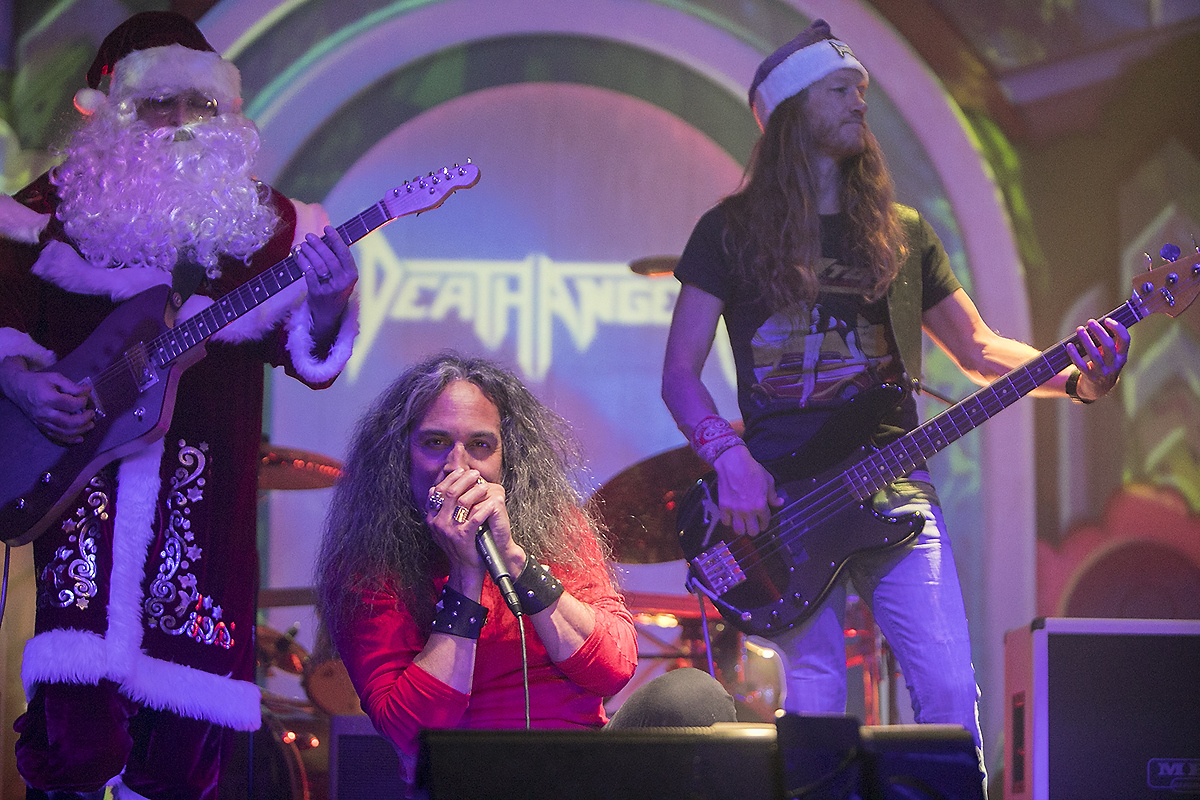 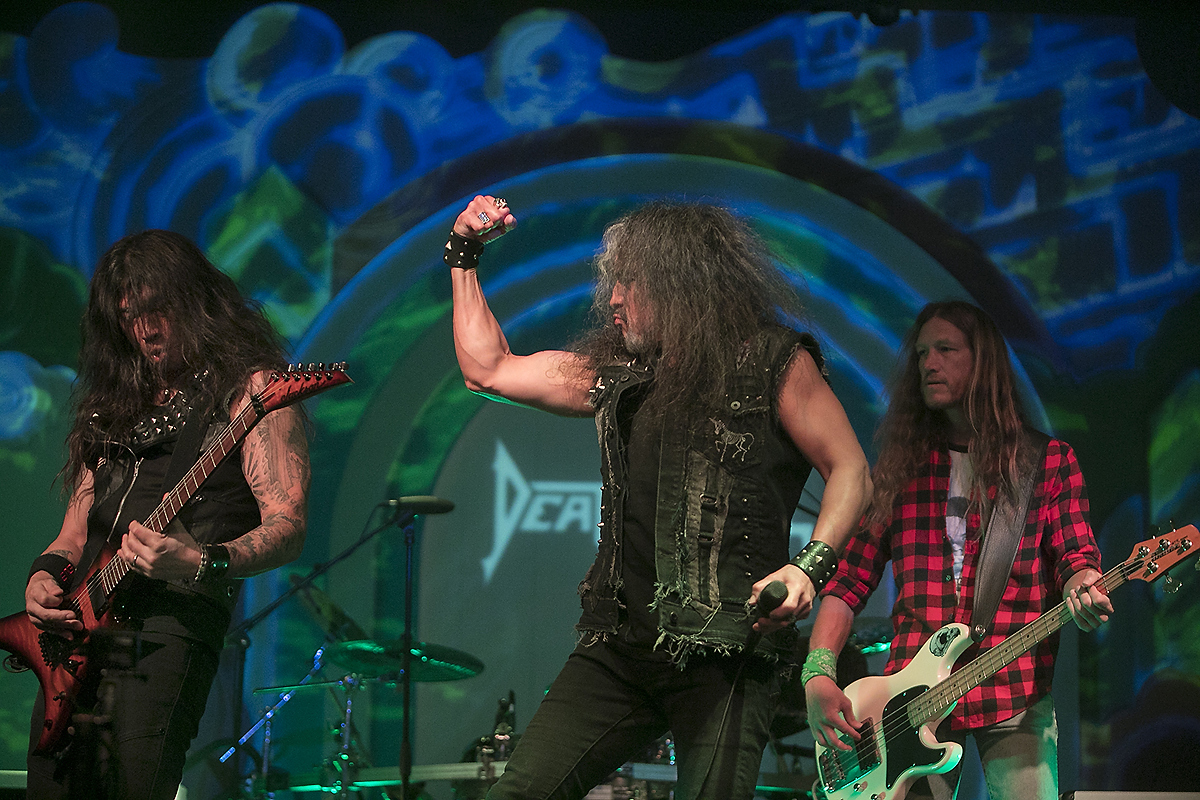 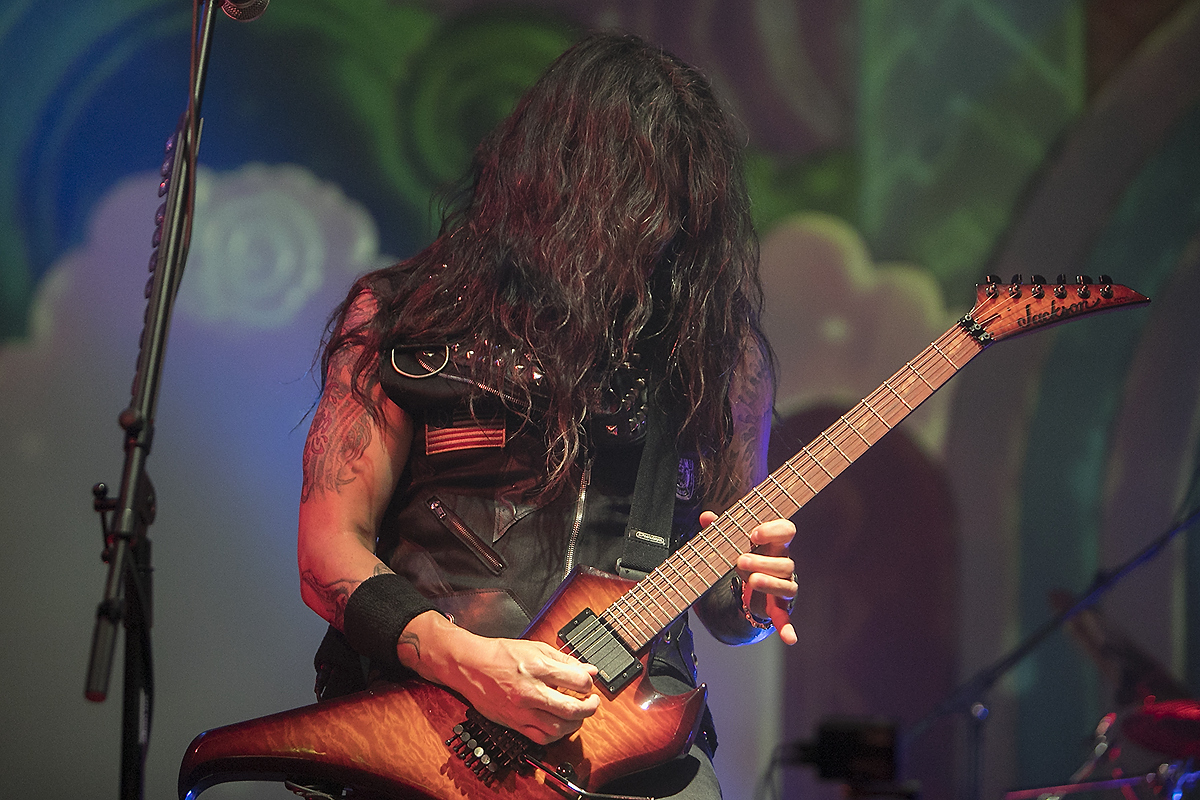 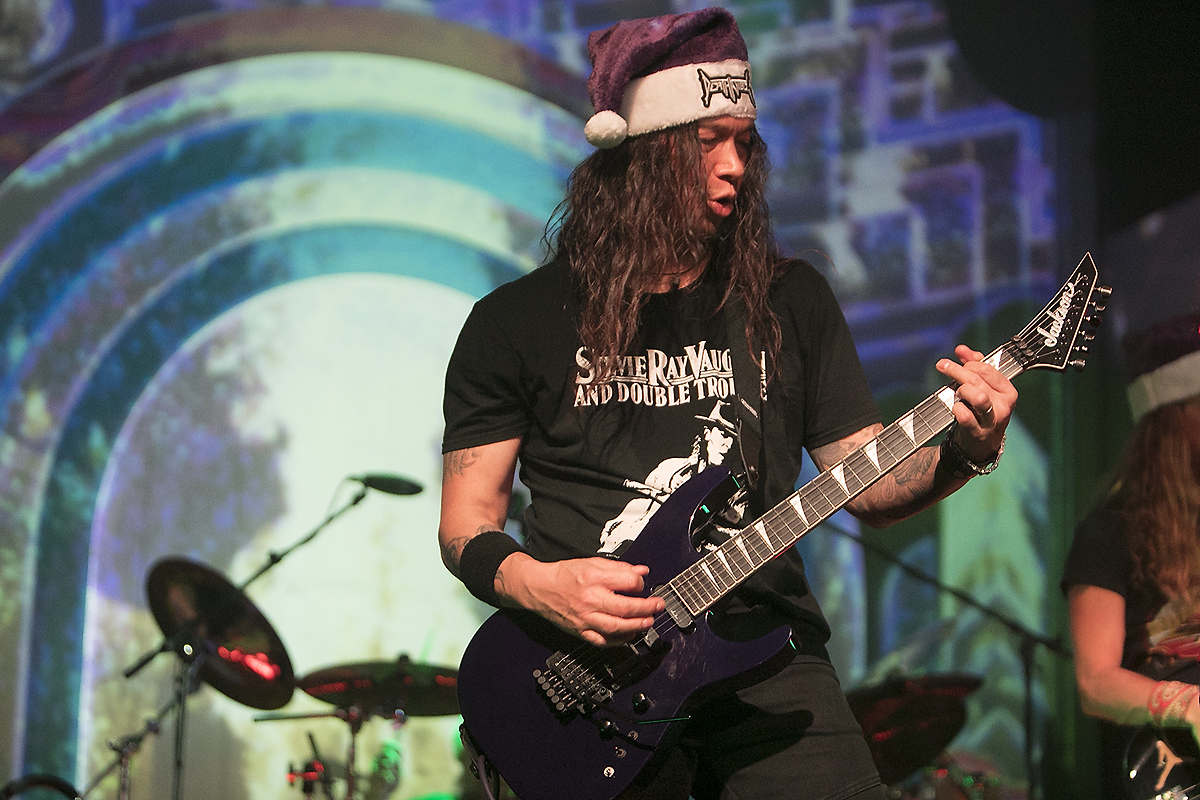 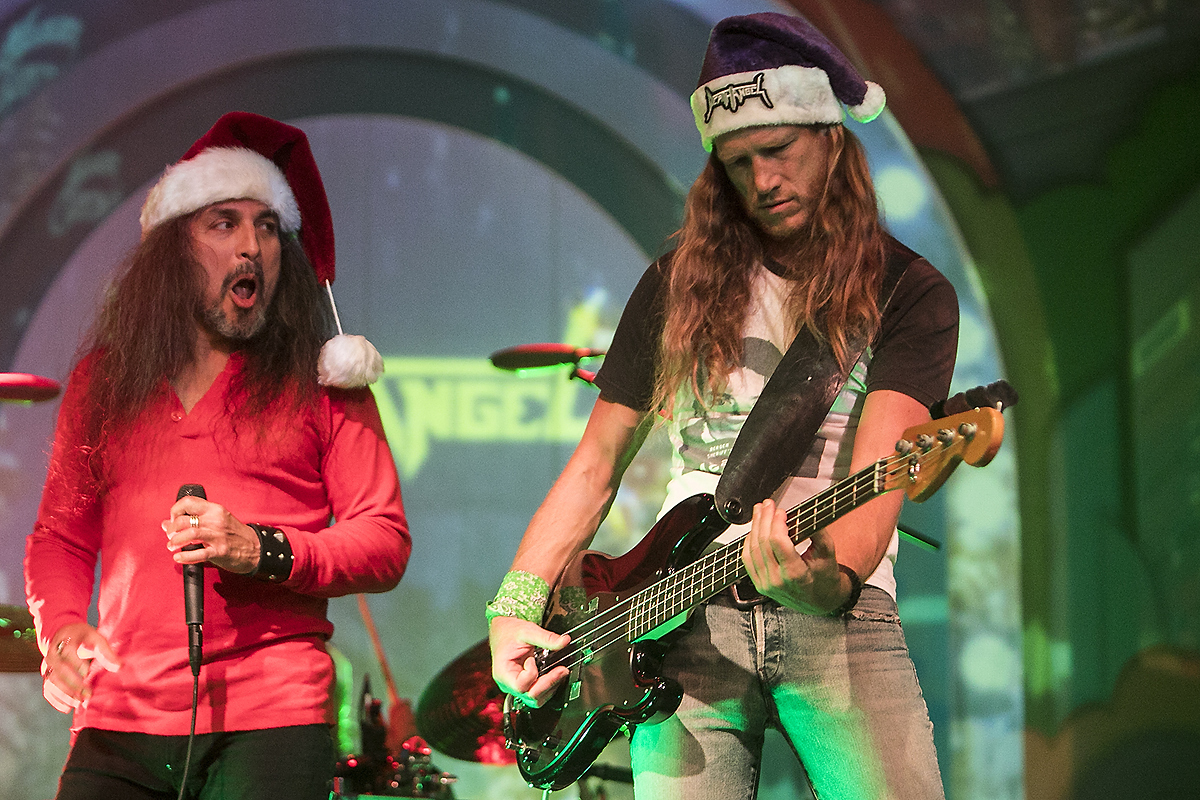 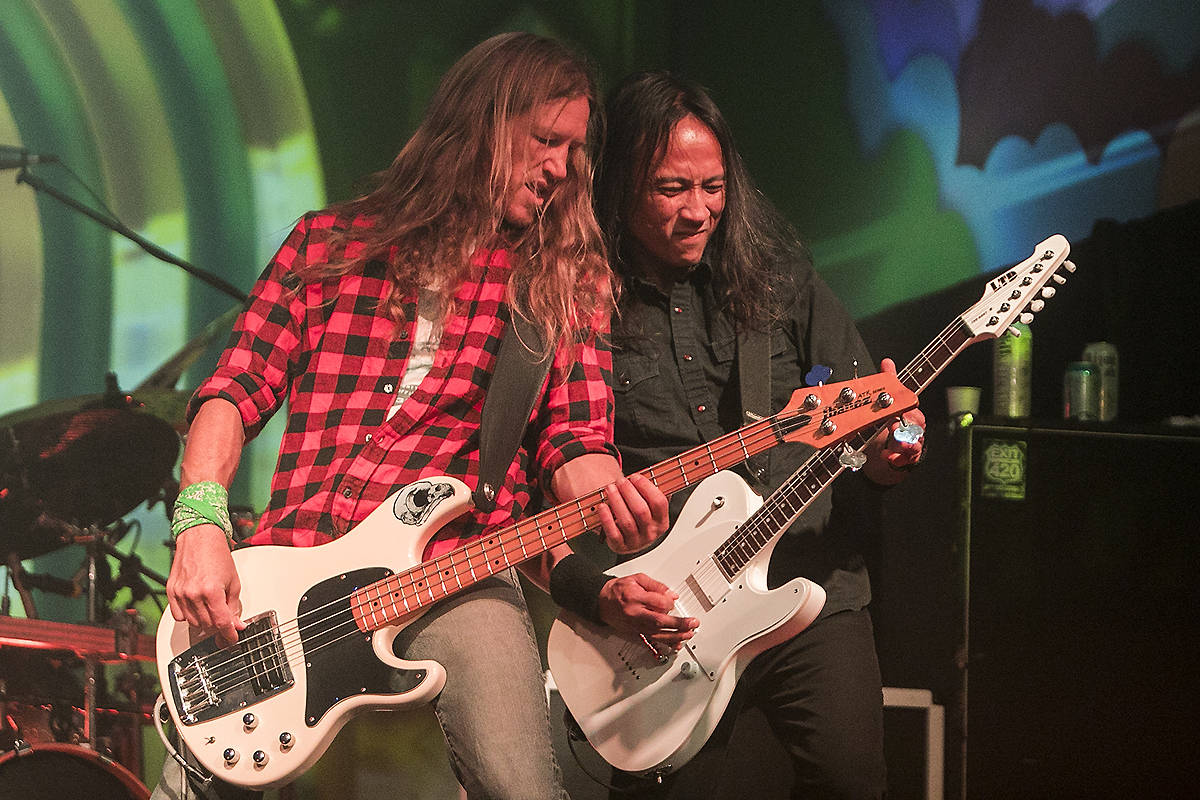 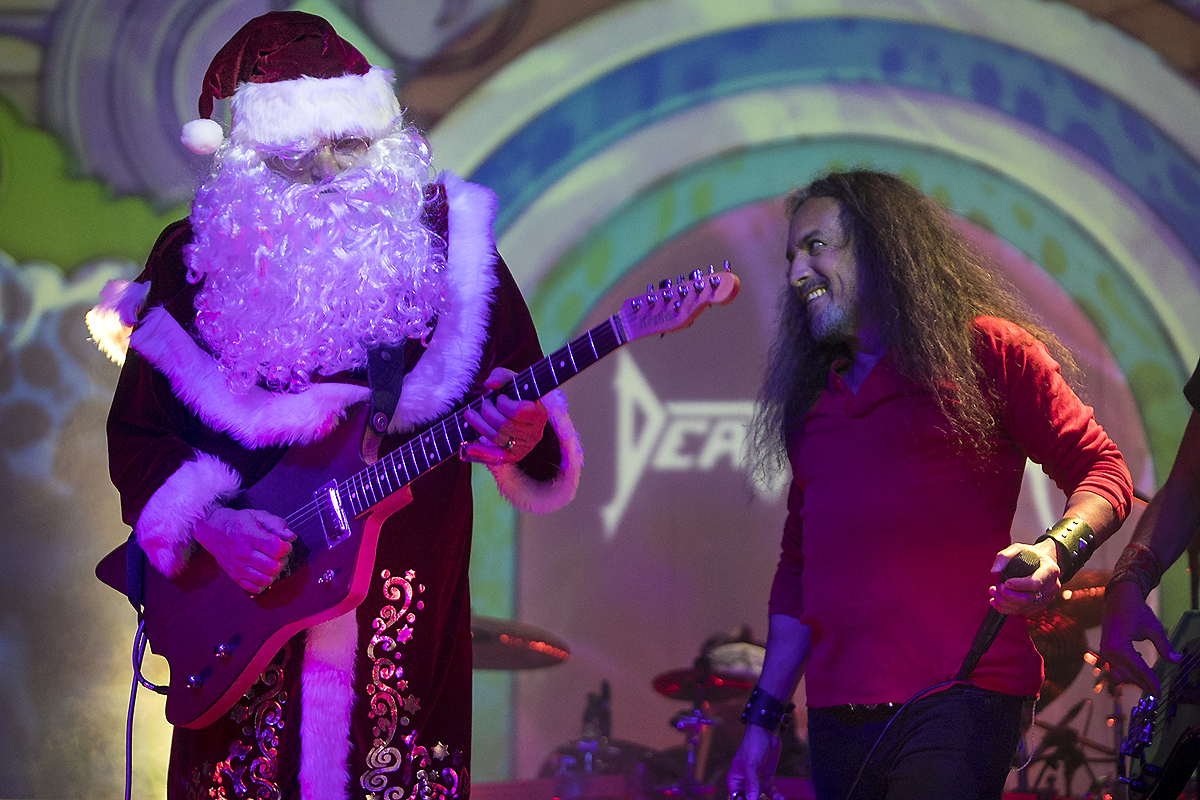 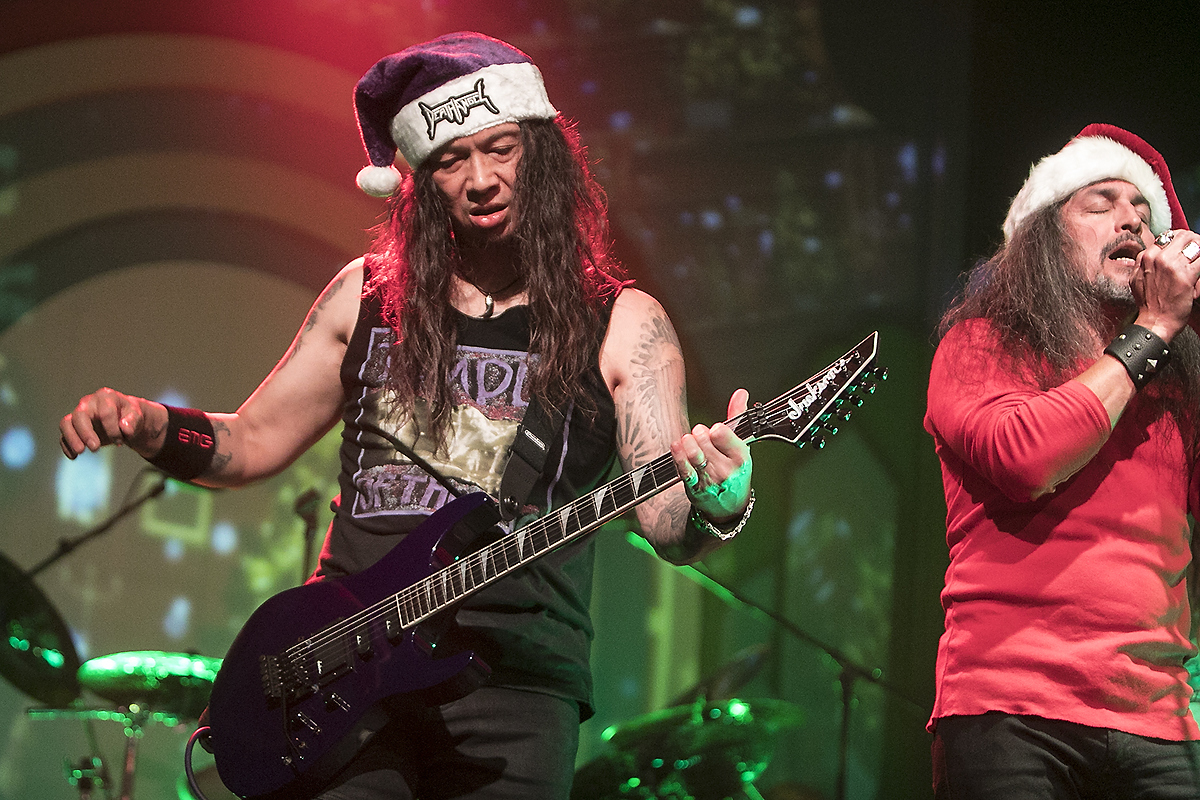 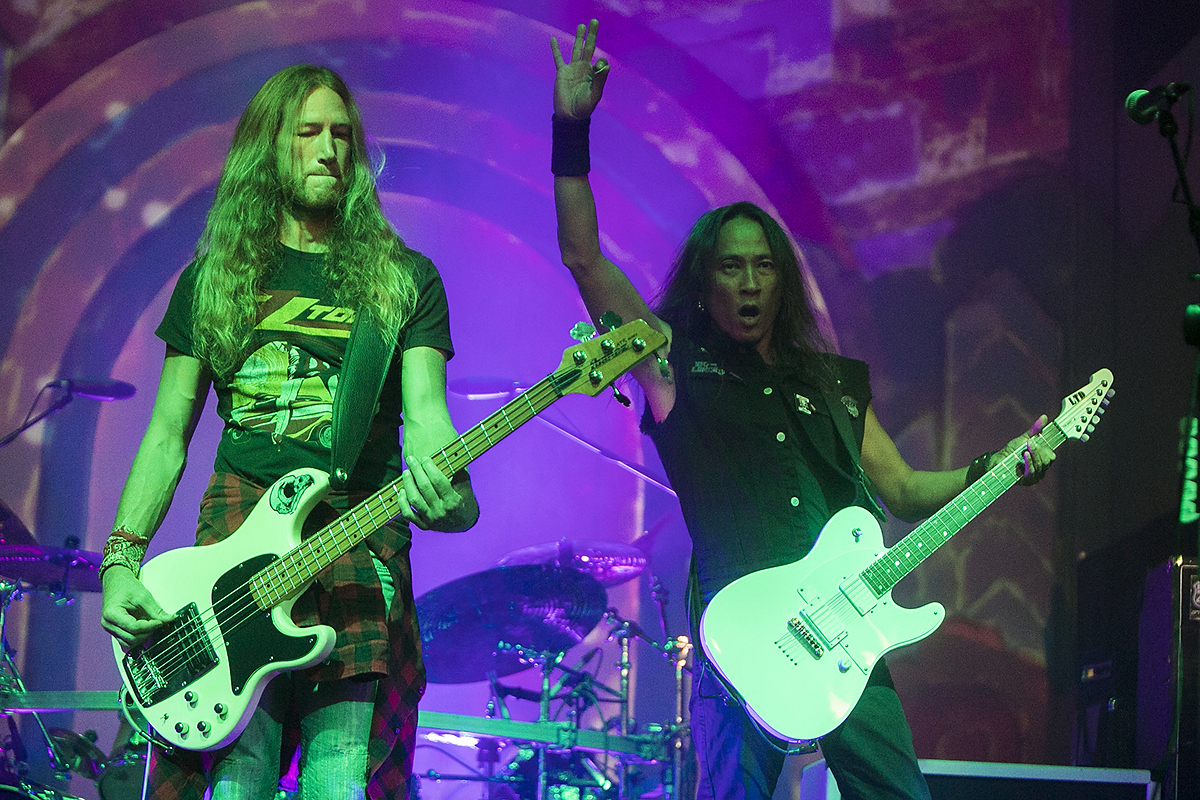 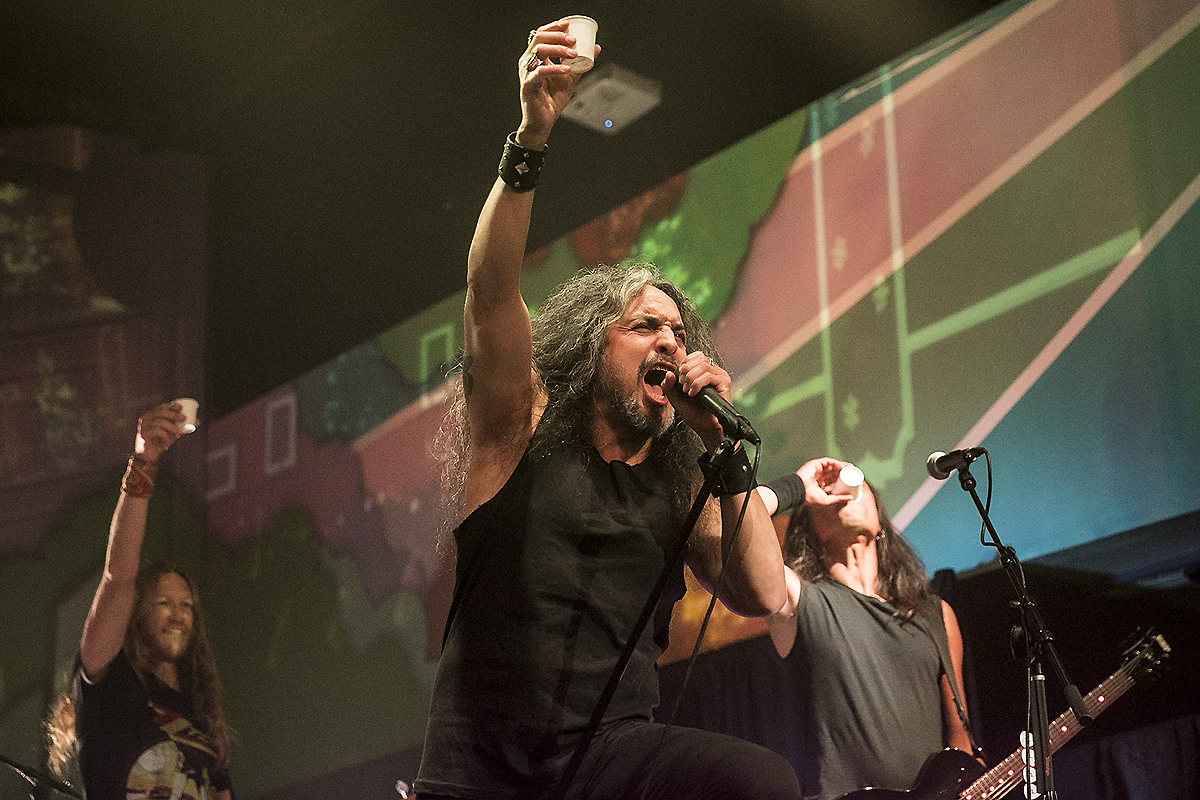 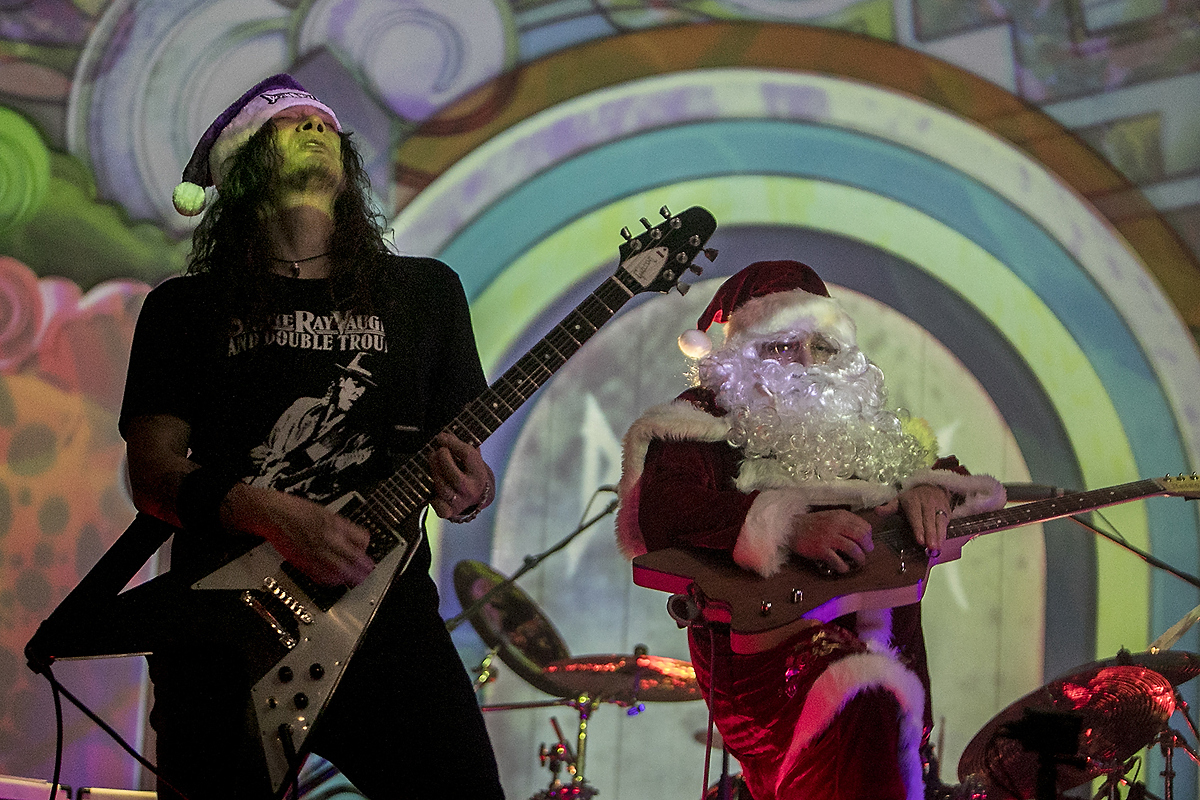 All photos by Raymond Ahner