Editor’s Note: This review is of Performance 2 of Gorillaz’s Song Machine Live, which aired on December 12th at 7:00 p.m. ET.

Setting the Stage: If there’s one thing that Gorillaz are known for, it’s irresistibly creative fusions of music and visuals. From the very beginning, they’ve ensured that their videos, concerts, web content, and assorted paraphernalia provided a characteristically cartoonish spectacle to match the flamboyant edge of their tunes. Their latest multimodal project, Song Machine, is the best example yet of that fusion, as it mixed episodic webisodes with an almanac, a proper LP — this year’s Song Machine, Season One: Strange Timez — and more. Really, all that was missing were live performances — that is, until now.

This past weekend, the group teamed up with LIVENow for “Gorillaz Present Song Machine Live from Kong”, a series of three separate but nearly identical “mixed-reality” shows (as they call it) filmed in the basement of London’s Kong Studios. Backed by a 14-piece band and a host of special guests — such as The Cure’s Robert Smith, 6LACK, Elton John, Fatoumata Diawara, JPEGMAFIA, Peter Hook, and Leee John — founders Damon Albarn and Jamie Hewlett delivered a persistently vivacious and striving celebration of Gorillaz music. Beyond that, the concert was a stirring testament to the power and potential of streaming concerts as valuable and fulfilling alternatives to the standard in-person format. 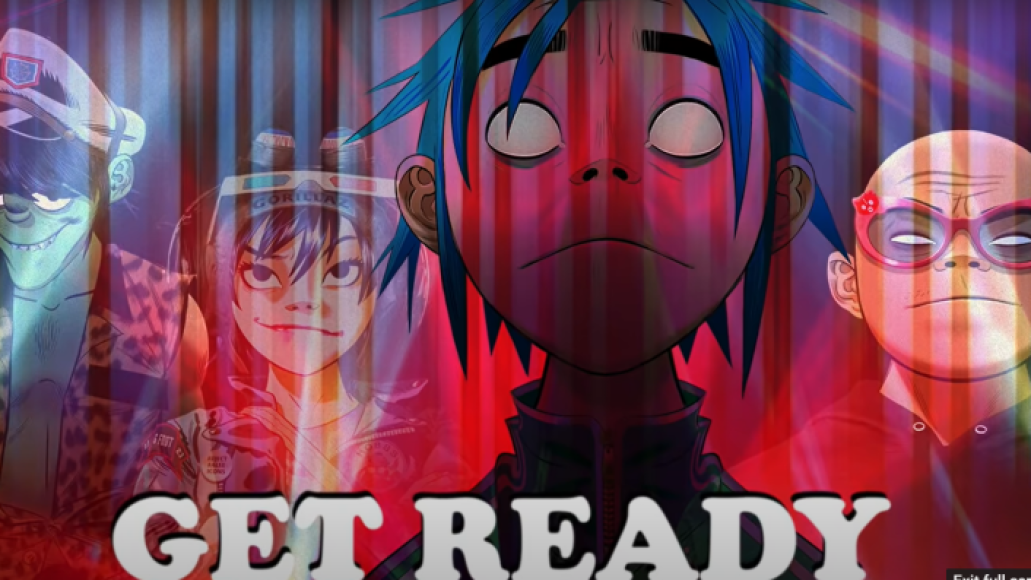 Gearing Up: Attendees were treated to an hour-long pre-show, during which hosts Scully and Henrie went album by album discussing their favorite Gorillaz songs and playing the corresponding videos and tracks. Both content creators/influencers excelled with great enthusiasm for and knowledge of Gorillaz’s catalogue, and their chemistry and banter were quite enjoyable. Plus, they presented from a lived-in music room full of vinyl records on shelves, so it had a welcoming atmosphere that was elevated further when they danced and/or invited viewers to tweet out their top tracks with the #songmachinelive hashtag.

Clips such as “Clint Eastwood”, “White Flag”, “DARE”, “Ascension”, “Pac-Man”, and more showcased Gorillaz’s evolution; likewise, Henrie and Scully were equally frisky and sentimental in revealing how much it all meant to them. In addition, they held brief split-screen interviews with bassist Seye Adelekan, drummer Femi Koleoso, and back-up singer Michelle Ndegwa, all of whom provided heartfelt insights into working with an artist they’d loved long before they joined. Overall, the pre-show evoked the format and feeling of classic MTV and VH1 in the best ways possible while providing a great commemoration of Gorillaz’s discography. 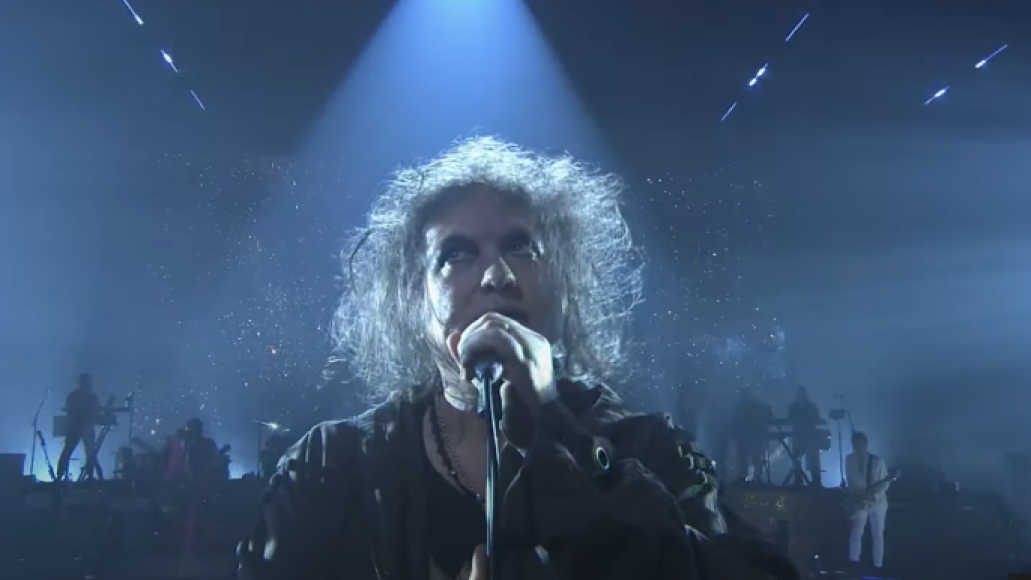 Taking the Stage: This was Gorillaz’s first concert in roughly two years, which inherently made it special. Following an expectedly quirky intro video that mixed real life and animation, the group spent much of the 80-minute runtime pulling out almost every tune from Song Machine, with album opener “Strange Timez” kicking things off. Delightfully, Robert Smith was there to truly do it justice and make it a faithful rendition. Afterward, the ensemble did similarly accurate versions of other lively cuts, such as “The Valley of the Pagans”, “Pac-Man”, “ML5”, and especially “Momentary Bliss” (which was a full-on freak-out thanks to in-person contributions from rapper slowthai and punk rock duo Slaves).

However, that’s not to say that it was an entirely adrenaline-fueled romp as those songs were counterbalanced by softer and more moving gems like “Désolé”, “Dead Butterflies” (featuring singer Roxani Arias and rapper Kano dishing out their passages on screen and on stage, respectively), and “The Pink Phantom” (led by an animated Elton John). Perhaps the best sequence in that sense was Leee John’s wonderfully soulful “The Lost Chords”; shrouded in blue and radiating passion for the piece, he, Albarn, and the other players managed it faultlessly. 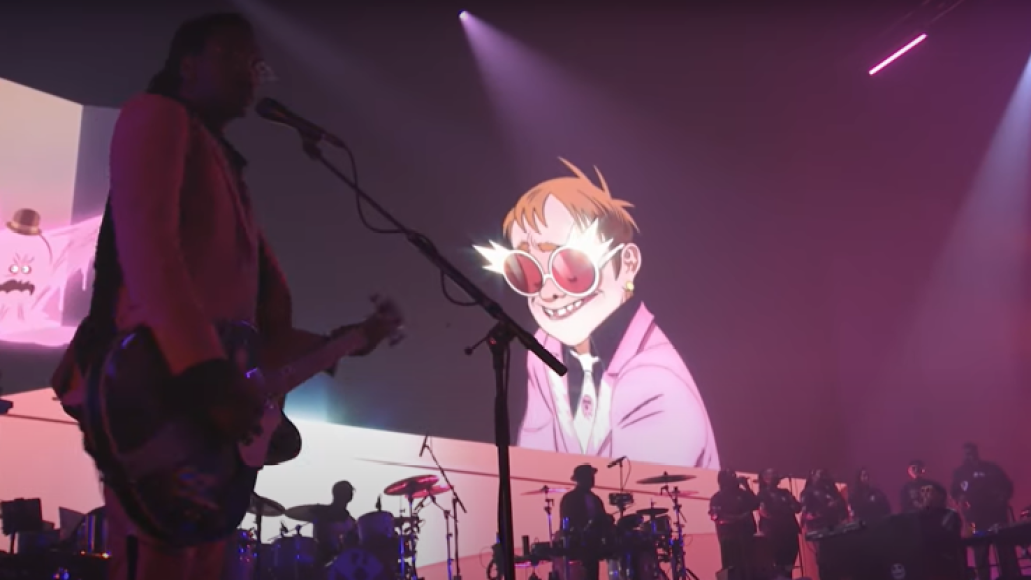 A special nod must be given to the epic conclusion of the main set, wherein English comedian/actor/musician Matt Berry (The IT Crowd, What We Do in the Shadows) gave a great reading of “Fire Coming Out of the Monkey’s Head”. He wore a black cloak and was illuminated by red and orange lighting, giving extra weight to the blend of thespian sincerity, funky instrumentation, and heartfelt piano ballad. Berry even improvised a bit right before Albarn took over, which was an effective way to add levity prior to the concluding lamentation.

Next, Albarn went to a smaller set for an intimate and acoustic encore comprised of material from their first two albums (2001’s Gorillaz and 2005’s Demon Days). They began with a slightly more organic take on “Last Living Souls” and then went into “Dracula” (which hadn’t been performed since 2002) and a sort of amalgamation of “Don’t Get Lost in Heaven” and “Demon Days”. All were warm and relaxing, with a lovely use of backing harmonies, Mouth Keyboard, and other eclectic timbres. 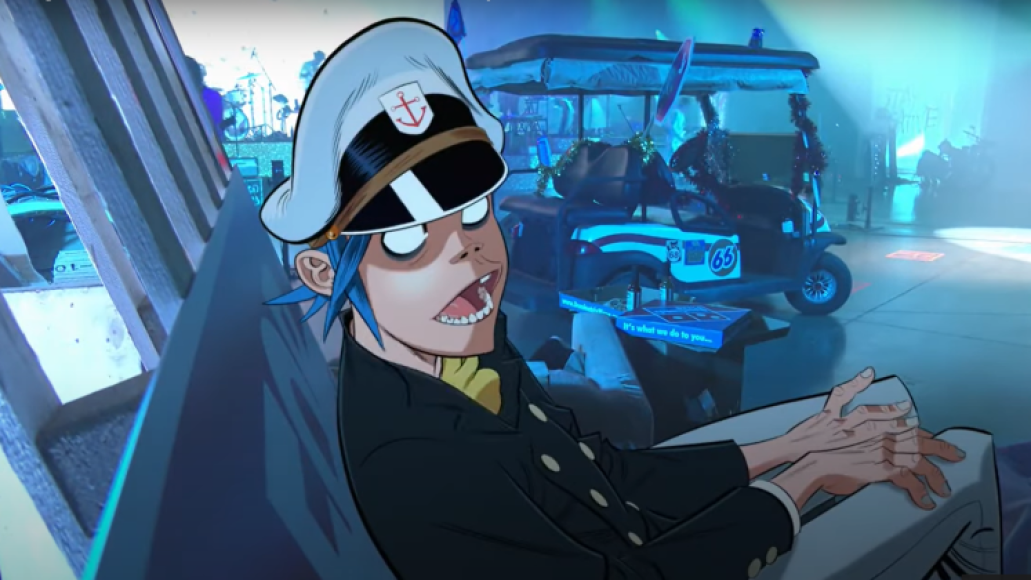 Just as the primary performance ended with its standout moment, so too did this extra segment, as Albarn joined with British reggae singer Sweetie Irie for a raucous rendition of “Clint Eastwood”. It’s actually the “re-fix” version that appeared as a bonus track on the UK edition of Gorillaz; while it’s not better than the original, it is a fascinating alternative version and the perfect way to end the concert with carefree party vibes.

As already alluded to, the show was as much of a visual delight as it was auditory. The stage itself was huge and always adorned in colorful lighting that suited the tone of the tracks. Plus, dynamic shots of graffiti messages on amplifiers, various props, and backstage dishevelment gave it an invitingly underground/cyberpunk essence. There was a consistently clever use of projected videos and holograms in tandem with the musicians, too, such as having projected versions of Beck and Diawara during “The Valley of the Pagans” and “Désolé”, respectively. Of course, the cartoon quartet — 2-D, Noodle, Murdoc, and Russel — frequently appeared on the screen as well, with a few skits adding more emblematic playfulness (such as 2-D and Murdoc chatting in the control room in-between “Désolé” and “Momentary Bliss”). It was a highly engrossing, inventive, and laborious undertaking that ceaselessly paid off. 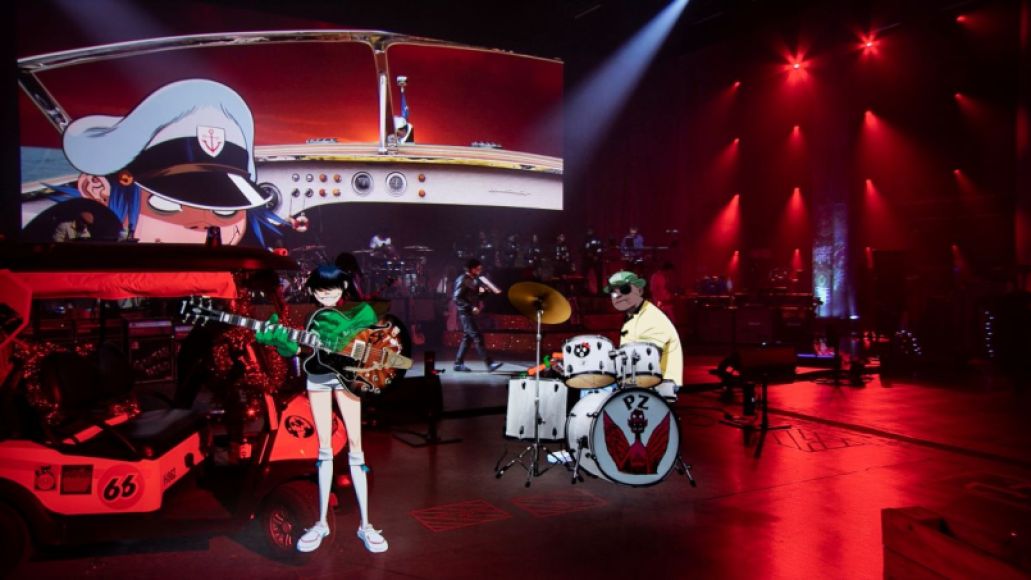 Despite the inherent limitations of trying to capture a complete concert experience virtually, Gorillaz Present Song Machine Live from Kong was a magnificent event. Not only were the songs themselves replicated almost perfectly — with slight variations surely apparent to diehard devotees — but the lengths to which Albarn, Hewlett, and company went to embody the band’s entire aesthetic (sound, look, and feel) was breathtaking. They really went all out to give viewers everything they’d get at an actual Gorillaz concert, producing an endlessly rewatchable experience that proves not only how singular Gorillaz remain, but also how remarkable streaming shows can be moving forward.

Setlist:
Strange Timez (with Robert Smith)
The Valley of the Pagans
The Lost Chord (with Leee John)
Pac-Man
MLS
The Pink Phantom
Opium
Aries (with Peter Hook and Georgia)
Dead Butterflies (with Kano)
Désolé
Momentary Bills (with slowthai and Slaves)
Fire Coming Out of the Monkey’s Head (with Matt Berry)

If you missed the shows this weekend, Sunday’s show will be made available online by LIVENow here.

Gorillaz Bring the Song Machine to Life with a Multimedia Extravaganza: Review