The Pitch: Courtrooms, prisons, the police — Steve McQueen‘s Small Axe anthology has taken probing, deeply personal looks at the effects of racial discrimination, bias, and anti-Black violence on London’s Afro-Caribbean communities in the ’60s through the ’80s. With Education, McQueen turns his eye to London’s school systems in the 1970s, a place rife with bifurcated ideas about the intelligence of Black and white people.

Enter Kingsley (a warm, intelligent turn from young Kenyah Sandy), the 12-year-old son of West Indies immigrants (Sharlene Whyte’s Agnes and Daniel Francis), who finds himself transferred to a “School for the Educationally Subnormal,” essentially a babysitting gig for special needs kids. Kingsley’s smart, intellectually curious; the school, filled with disinterested teachers who run the place like a daycare, is no place for him. Simply put, he was sent there because he’s Black and has a slight reading deficit.

As Kingsley languishes in a racist system that underestimates his intelligence because he’s Black, it’ll be up to Agnes, and a growing coalition of concerned mothers and educators, to get him out.

The Smallest Axe of All: After the comparative disappointment of Alex Wheatle (at least within the confines of the otherwise-masterful anthology McQueen has created), it’s a blessing that the series goes out on a high note. Like Wheatle, Education clocks in at just over an hour, leaving McQueen and co-writer Alasdair Siddons little time to tell its historically-rooted story. But just like the boy at its center, its deceptively small frame hides remarkable insight and intelligence.

Drawn loosely from McQueen’s own life (where he himself was put in a ‘special class’ for his reading difficulties), Education packs a rhetorical punch, combining the coming-of-age story with delicate historical drama to tell two sides of this sociopolitical crime. There’s Kingsley’s point of view, of course, the frustrated young man who doesn’t understand why his teachers don’t treat him the same as the other students.

But then there’s also Agnes, an exhausted, overworked nurse, and a husband whose lack of education portends a grim future for Kingsley himself. It’s they who truly need the education — activists like Lydia Thomas (Josette Simon) informing them and other parents of the systematic bias their children are suffering. 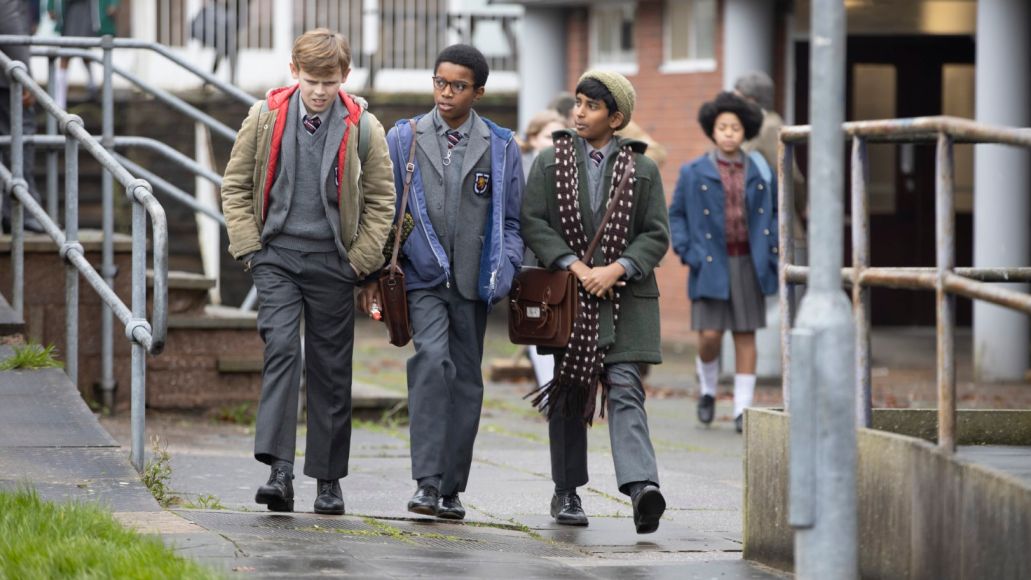 Suck My Dictionary: Naturally, Education soaks in the same exacting period detail as the other Small Axes, DP Shabier Kirchner working wonders with the drab classrooms and confining family apartment Kingsley occupies. The 16mm photography immediately thrusts you into its grainy ’70s setting, remarkable in its effortlessness. It’s not as showy as the lushness of Lovers Rock or the long tracking shots of Red, White, and Blue, but its simplicity is its greatest asset.

In this way, it takes on even more of a documentary feel, hand-held camerawork evoking the likes of D.A. Pennebaker and Les Blank, finding intimacy and confinement in equal measure. There’s lots to fret about in Kingsley’s situation: the scenes in his SES are downright hellish, alternating between the overwhelming cacophony of the unruly kids around him and stifling boredom.

One scene, in which McQueen treats us to a painfully full-length rendition of “House of the Rising Sun” by a bored hippie teacher to his equally lifeless students, feels like a contrasting bookend to the “Silly Games” scene from Lovers Rock. Where the latter is filled with joy you don’t want to stop, the former is unceasing agony.

In many ways, Education is less Kingsley’s story and more Agnes’, McQueen uniquely concerned with cracking through her defensiveness and edging her towards activism. Like so many of us, she’s more concerned with getting by and keeping her head down then going through the inconvenient effort of trying to improve the world around her. But as she’s gradually awakened to Kingsley’s plight and that of others, Education becomes a story about the importance of community activism to achieve positive change.

The Verdict: “I am Black, and I love being Black,” says Hazel Lewis (Naomi Ackie, Star Wars: The Rise of Skywalker) to a Black student, a statement filled with reassurance for a young girl ashamed of her race. That sentence feels like the anthology in a nutshell: five tales of celebratory Blackness, of the times when Black Londoners overcame the incredible societal obstacles placed before them and thrived.

The partygoers of Lovers Rock find solace on the dance floor; the Mangrove Nine get justice at the highest court in the land; Leroy Logan becomes the first Black police commissioner in London; Alex Wheatle goes from prisoner to acclaimed author.

Education is a tinier, more intimate button on McQueen’s set of stories, but it’s one of its most potent: the simple act of learning is powerful actualization, so proven in the white establishment’s efforts to make it so inaccessible to Black people.

Where’s It Playing? Education takes us to school on Amazon Prime Video on December 18th, closing out the Small Axe anthology.