The Pitch: Three Australian brothers Barry, Robin, and Maurice Gibb formed the most formidable musical and songwriter trio this side of Holland-Dozier-Holland when they became the Bee Gees. Musical chameleons, they rose to fame during the late-staged British Invasion of the 1960s, recalibrated for the singer-songwriter era of the early-1970s, and rose to a level of fame during the height of disco not seen since The Beatles. Director Frank Marshall captures it all in his new HBO documentary, The Bee Gees: How Can You Mend a Broken Heart, mixing spine-tingling isolation tracks and archival interviews with the brothers Gibb to tell a captivating story of a sibling trio who, despite their differences, thrived due to their deep love.

To Love Somebody: How Can You Mend a Broken Heart finds the Bee Gees dressed in silver glittering jumpsuits, brandishing exposed chest hair, at the height of their fame, awaiting a raucous 1979 crowd in the Oakland Coliseum. The group doesn’t know it, but nearly 2,300 miles away, at Comiskey Park, the end of disco is soon to arrive. That’s the opening setting for a group that’ll soon learn the perils of music celebrity, and plummet from the wide-spread adoration to lampooned.

Fast-forward to 2019, and a grey-haired Barry Gibb, in a straw sun hat, walks on his Miami estate. As the last surviving member of the group, he’s now the living embodiment of the forlorn final Templar knight in Indiana Jones and the Last Crusade. Everyday, he wrestles with the memories of family members now long gone. The tragic luck of being the last.

Through archival interviews, dating to 1999, the siblings explain that, despite the age difference (Robin and Maurice were younger than Barry), they felt like triplets due to their unified dream of becoming famous. Home movies from their childhood reveal a trio of brothers who were irreverent in their humor. The tight-knit aura, which would signal their later secured harmonies, is evident in the footage too. As they explain, they thought with one mind. By 1967, they jumped to England, Robert Stigwood — who was already managing Cream — became their manager, and they formed a quintet with guitarist Vince Melouney and drummer Colin Peterson. 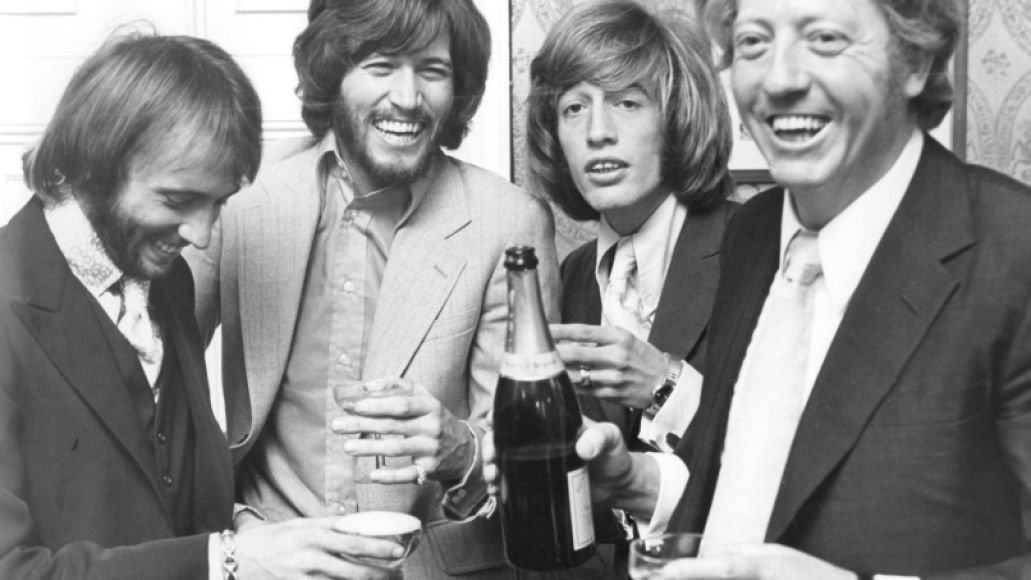 Lonely Days: Marshall spends much of the first half hour of his 110-minute documentary outlining the group’s ambitions and the subtle, yet gaping, ways the brothers differed. Robin, who provided the trio’s tear-jerking vibratos, is described as a reclusive trickster, a man who needed coaxing before opening up. Maurice was the affable lower-toned peacemaker; the one who calmed his twin brother Robin and Barry’s competitive streaks. And Barry, the oldest, was the obvious dashing frontman who offered divinely textured falsettos. Their differences binded them and nearly destroyed them.

Interviews with Noel Gallagher and Nick Jonas add context to a dynamic few others can know or imagine. “When you’ve got brothers singing, it’s like an instrument nobody else can buy,” Gallagher explains, and continues, “Making music with your family is equally the greatest strength and the greatest weakness you can ever have in a musical partnership.” And no one knows those strengths and weaknesses better than the elder Gallagher. Jonas also explains how unresolved childhood dynamics can lead to siblings disintegrating as adults.

These are, of course, the ingredients, mixed with fame and rock-star ego, which would lead to the group’s 1969 breakup. Editors Derek Boonstra and Robert A. Martinez stitch together a bevvy of newsreel footage — the brothers’ respective marriages and Robin’s disastrous solo performance in Auckland — to show how the brothers Gibb searched for their familiar familial love in other places, only to realize their dependence upon one another. 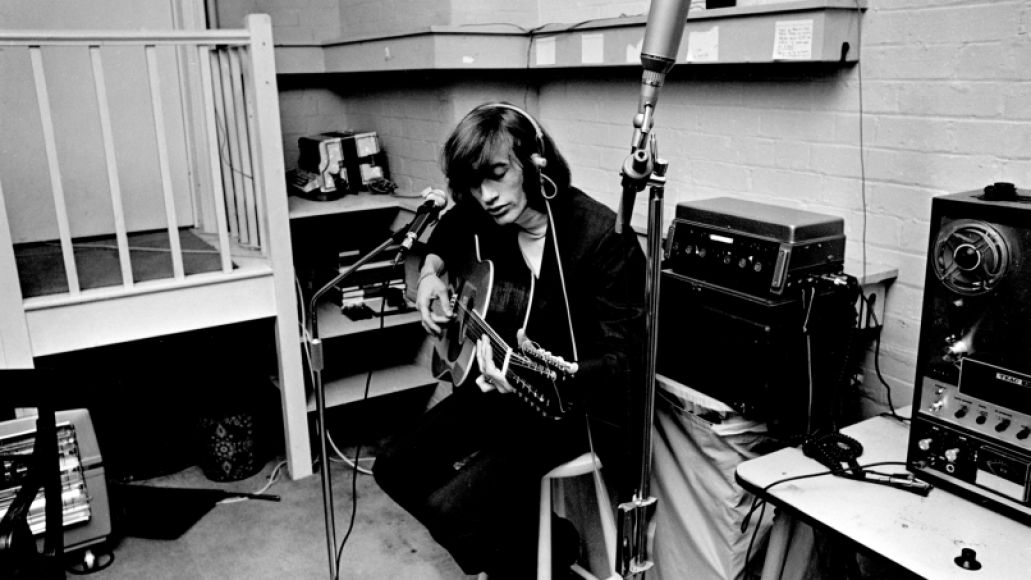 Too Much Heaven: The second act to How Can You Mend a Broken Heart — the reformation of the Bee Gees — is a showcase of their songwriting talent. While the first quarter of the documentary swims by the writing of “New York Mining Disaster 1941” and “Massachusetts” in jukebox fashion, Marshall slows his pace to capture the chameleon skill of the group. For instance, their return witnessed them transitioning from their late-’60s pop sound to a singer-songwriter vibe in the early-70s with hits such as “Lonely Days” and “How Can You Mend a Broken Heart”.

But it’s their transition to their disco sound, when they became as Eric Clapton describes the soul group they were always meant to be, that their careers shot in overdrive. Two scenes that stick out are the isolation of the scratchy guitar track to “Jive Talking”, which has “hit” written all over it, and the isolation of Barry’s “Nights on Broadway” vocal, when he first reached the otherworldly heights of his signature falsetto. Both offer viewers a peek into the birth of an auditory revolution the group would later experiment with sampling and synths, too — back when disco became the dominant genre. It’s this new sound that would lead them to writing the soundtrack for Saturday Night Fever, which would catapult the brothers into holding five of the top 10 slots on the Billboard Hot 100. Their journey exemplifies the greatest asset a group can have — adaptability — and hiw that adaptability made them into a worldwide phenomenon and prepared them for their inevitable crash.

Marshall is aware of fame’s price and its cycles of inflation and deflation. In the span of one 1979 night, during the Steve Dahl-led Disco Demolition, the Bee Gees fell from the biggest group in the world to persona non-grata. Marshall shows how the revolt against disco had as much to do with the fragility of white men to accept that a genre with roots in the black and gay community could dominate the airwaves, as the group’s chart-topping success. And if their fall from grace doesn’t fully explain what music and fame can give and take away, then the tragedy of their teen idol younger brother Andy will do it, too. At its core, How Can You Mend a Broken Heart isn’t just about a partnership between ultra-talented siblings. It concerns the bonds we share with family. It concerns the isolation we feel when they’re gone, and the strength required to carry on.

Verdict: If there’s a broken heart in Marshall’s music doc, it’s certainly Barry Gibb. Marshall tries to avoid mining heartbreak for engrossment, especially since Barry’s grief is so apparent. Marshall’s reticence causes the final quarter of the documentary to feel rushed. Intertitle cards give the dates of Robin and Maurice’s deaths while rushing through the loss felt by not just Barry, but also the twins’ widows Dwina and Yvonne.

Marshall also gives light notice to the group’s later resurgence, not just as songwriters, but as a hit-making group during the 1980s and ’90s. Still, Barry’s declaration that he’d trade every hit to be with his brothers again breaks the heart with the same force as their glorious unified melodies. With a jukebox parade that will invite viewers to inevitably sing-along to classic earworms, How Can You Mend a Broken Heart is the Bee Gees documentary you’ve been waiting for. It’s a fitting tribute to their unending love for each other.

Where’s It Streaming? The dancing begins on December 12th via HBO Max.

How Can You Mend a Broken Heart Is the Bee Gees Doc You’ve Been Waiting For: Review