The Pitch: By definition, the word value means “the regard that something is held to deserve; the importance, worth, or usefulness of something.” A person’s value, however, is most often overlooked, under-appreciated or even unknown. To understand one’s worth is a unique ability that not many possess – that attribute alone can change the trajectory of an individual’s life, drastically. Ma Rainey’s Black Bottom digs deep into the core of one of America’s most beautiful artforms, during a time where segregation and racial oppression escalated across the country.

Based on August Wilson’s Broadway play, Ma Rainey’s Black Bottom chronicles an emotional recording session housed within a Chicago studio in 1927. Along with a string of talented actors, George C. Wolfe’s direction explores the dichotomy between personalities from various backgrounds and the sometimes-painful heartbreak that comes with conversations in self-evaluation.

Stars Of The Stage: Academy Award-winning actress Viola Davis gives an exceptional performance as the film’s title character. A blues singer of extreme complexity, Ma Rainey’s seemingly unbreakable exterior is a necessary defense mechanism in a society unaccepting of a strong African American woman that knows what she wants — and is willing to do (or say) anything to achieve it. In an equally unforgiving industry, Rainey is fully aware of her musical influence and also understands the extent of the exploitation of Black artists in music. Throughout the film, Davis’ character is continuously at odds with her manager, Irwin (Jeremy Shamos), and the deceitful owner of the recording studio, Sturdyvant (Jonny Coyne). Although not apparent at first glance, both of these men have ulterior motives; their decisions will ultimately leave a permanent effect on the lives of all parties involved during that fateful afternoon. 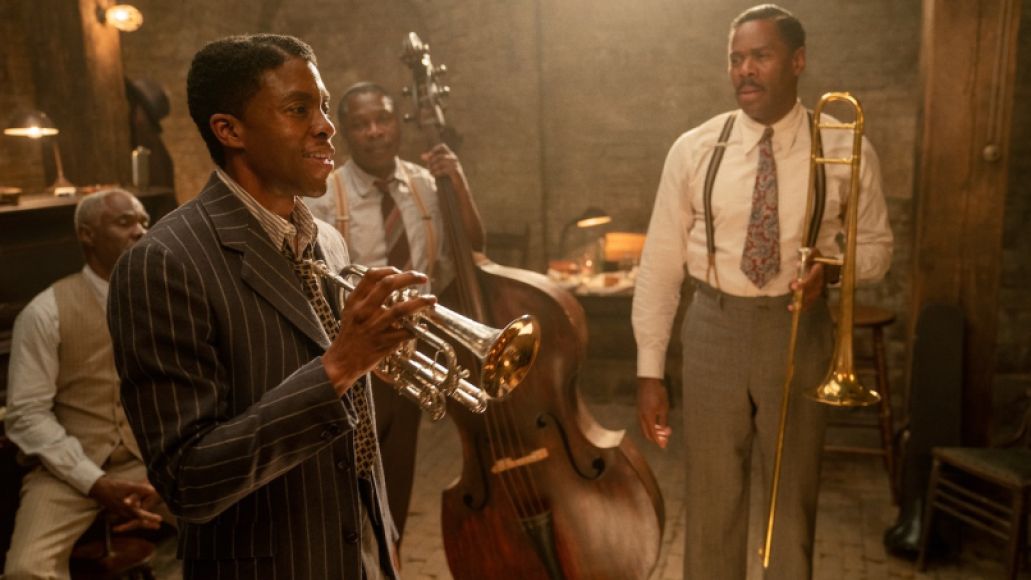 The most impactful scenes in Ma Rainey’s Black Bottom do not occur in the recording session, but in the rehearsal space below. Rainey’s band, played by Glynn Turman, Colman Domingo, Michael Potts, and the late Chadwick Boseman, represent the different facets of the trials and tribulations associated with the Black experience in America. The band’s “leader” and trombonist, Cutler (Domingo), is a man all too familiar with the way things are and lacks patience with anyone who believes otherwise. The bass player, Slow Drag (Potts), is accepting of his place in life; an indifference caused by personal conflict due to the “glass ceiling” that still exists for Black people today. Toledo (Turman) is the band’s pianist – an older gentleman who embodies the brazen nature of a person of color born into slavery and fought for survival in the Jim Crow era.

Boseman plays the quartet’s youthful and enthusiastic cornetist, Levee. As charming as he is confident, Levee has grandiose desires of leading his own band that would also play his compositions. At times, his selfish ambition comes across as admirable, but in many instances become destructive to both himself and the people around him. We learn about his harmful compulsion on two occasions – the purchase of an expensive pair of shoes and the pursuit of Ma’s girlfriend, Dussie Mae (Taylour Paige). His willingness to acquiesce to the powers that be in order to get ahead come across as untrustworthy, but it is only when the audience learns of his traumatic past that they are able to empathize with Levee. Boseman’s character is a heartbreaking take on how temporary encounters can change your viewpoint on life, entirely. 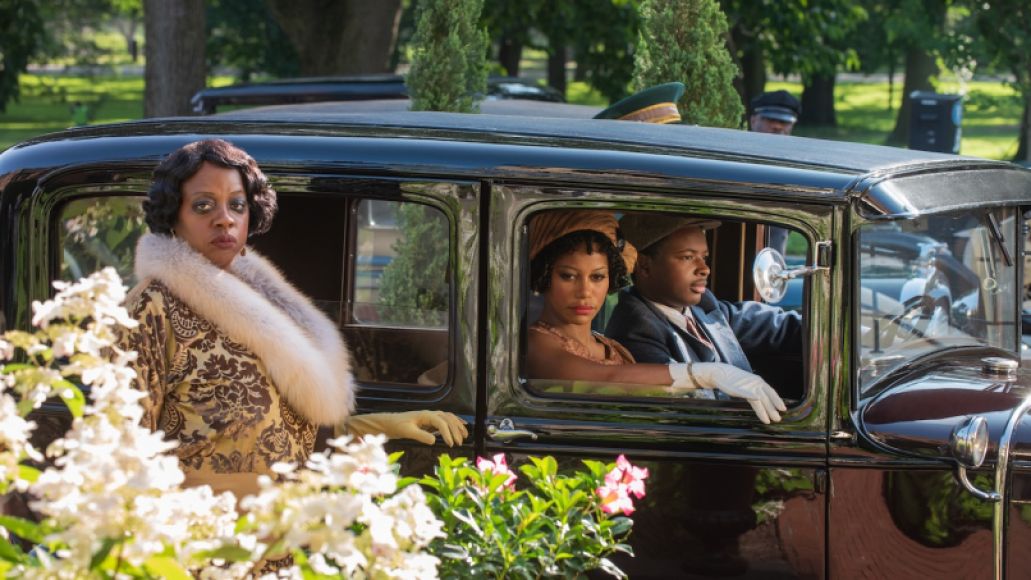 Writings On The Wall: The symbolism in Ruben Santiago-Hudson’s adaptation of Wilson’s 1982 play is seen frequently throughout its 90-minute duration. Inside the band’s rehearsal space was a door that Levee constantly struggled with; it was either jammed or locked, but he continued to push, increasing his frustration with each attempt. In the end, after finally getting it to open, he realizes that the path does not lead anywhere at all; similar to his hopes of moving forward in life.

What is perhaps the film’s most important message is the battle that Rainey has had to deal with for years – the protection and preservation of her art. After an entire afternoon of arguments and postponed takes, Ma eventually signs over the rights to her recording; thus, giving her voice to the people most inclined to silence it. This tactic is still present in today’s music industry, which makes Rainey’s before-her-time attitude towards executives even that much more impressive. 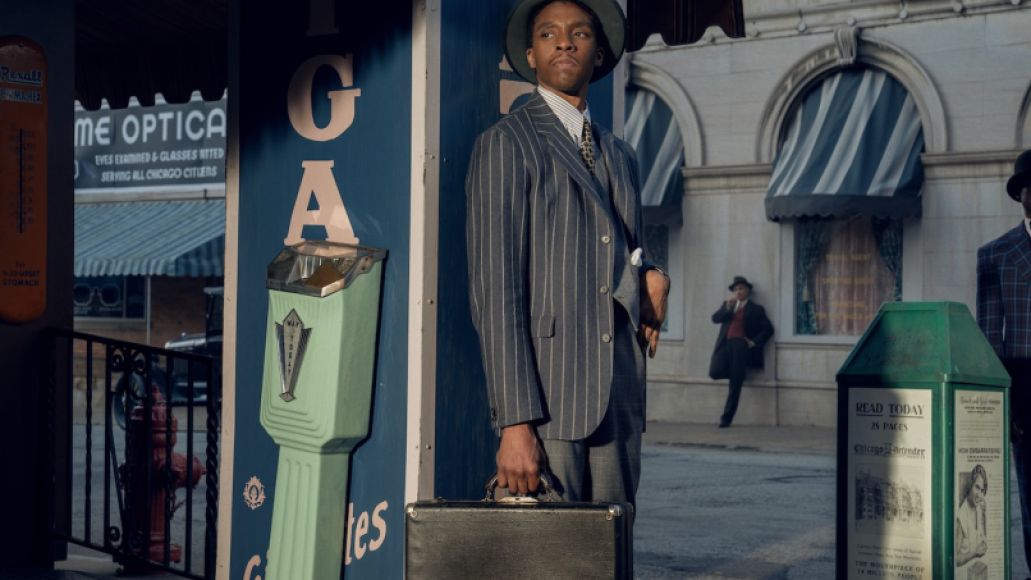 An Artist’s Grand Finale: Unfortunately, Ma Rainey’s Black Bottom will stand as Chadwick Boseman’s final film. His untimely death in August of this year draws a parallel to the demise of the character he so excellently portrays here – his broken spirit is disheartening, but objectively authentic. As amazing as Davis’ depiction of “The Mother of the Blues” is, it’s Boseman’s acting that will truly resonate with the Netflix original’s viewers. Levee’s limitless potential and unwritten future makes his downfall even more disappointing, and his unrealized dreams a palpable tragedy – both on and off the screen.

The Verdict: The first installment of August Wilson’s 10-play Pittsburgh Cycle is a written account of race, art, religion, and the historic exploitation of Black culture by people outside of their heritage. The current adaption of Ma Rainey’s Black Bottom maintains the essence of the original and revives the story of an iconic artist whose fight still remains until this day. As the world continues to mourn the loss of Chadwick Boseman, his last performance will serve as a magnificent reminder of the actor’s talent, and an exclamation point on a life that inspired a generation.

Where Is It Streaming?: Ma Rainey’s Black Bottom is currently on Netflix. 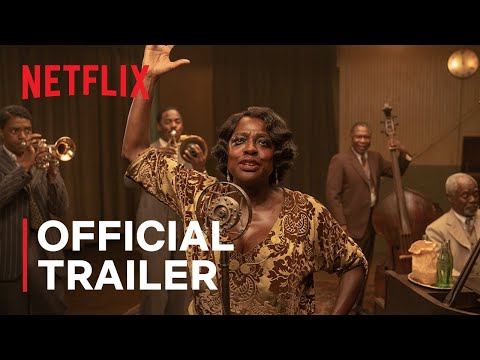