Because of the ongoing pandemic, Nick Cave has been forced to cancel both his 2020 and 2021 tour dates. However, the gothic rock veteran doesn’t plan on just sitting around and bingeing TV shows for the next few months. Intent on making the most of his newfound down time, Cave has announced that he will begin recording a new album.

Cave revealed the exciting tidbit on his Red Hand Files Q&A website while replying to a fan who had expressed her sadness over the tour cancellation news. The Australian musician first addressed the scrapped concerts, writing, “When the pandemic first hit and we had to postpone the European tour I was given the opportunity to take stock, and to see what I actually wanted to do with my life.”

“Well, I took stock. I took a year’s stock. I came to the conclusion that what I most wanted to do in life was to play live,” continued Cave. “I truly miss it. Cancelling the tour is a great disappointment to me, and to the rest of the band. We tried to make it work but, in the end… we felt we had to make the decision to cancel, at least for now.”

Cave went on to acknowledge the continued “unpredictability” of the future, but assured fans of one thing he knew to be true and certain: “Time to make a record. Speak to you all again in the New Year.” And with that, St. Nick has gifted the world some much needed hope.

Read Cave’s full response below or head to The Red Hand Files website. 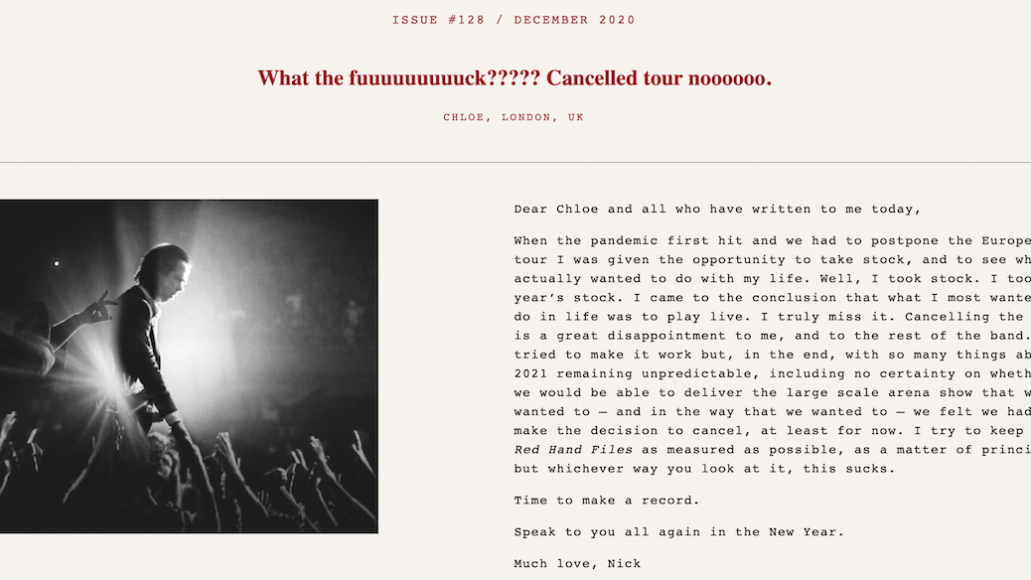 Editor’s Note: Join us in the fight to protect live music by picking up our new original shirt. A portion of all proceeds go towards independent music venues in their recovery efforts.