It’s here we begin to see the great divide forming in this eerie, new apocalyptic world. Out in Boulder, Colorado, there’s Mother Abigail (Whoopi Goldberg) and her followers. Nearby in Las Vegas is Randall Flagg (Alexander Skarsgard) and his troops.

Below, we’ve broken down the essentials, answered some of the big questions, and uncovered the various Easter eggs littered throughout the episode. For a more exhaustive breakdown, join The Losers’ Club above for their weekly podcast recap.

Who Is Larry Traveling With? 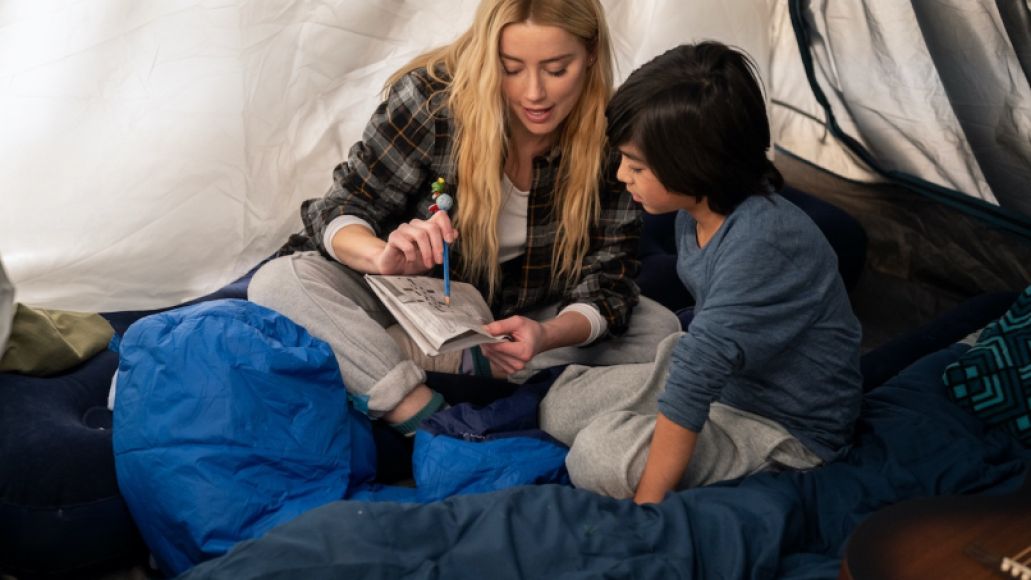 Like last week’s premiere, “Pocket Savior” jumps ahead in King’s novel, which is probably — okay, totally — confusing for anyone who isn’t a Constant Reader. This time around, we’re immediately introduced to a man cooking meat on a grill in an empty department store. He’s not alone as we see he’s sharing a tent with a woman and a young boy. At face value, it’s apparent that they’re all survivors, on the road, and heading somewhere. That somewhere, as we learn soon after, winds up being Boulder, where a familiar face in Stu Redman (James Marsden) recognizes the mystery man as Larry Underwood (Adepo).

So, who are the others he’s traveling with? Fair question. Let’s go through the car in that immediate arrival in Boulder: In the front scene, that would be The Judge, who has been gender-swapped in this adaptation with star Gabrielle Rose. We’re not formally introduced to her yet but she’ll prove useful in the long run. In the backseat, though, is Nadine Cross (Amber Heard), one of the more mysterious characters in King’s story, and a young boy by the name of Joe (Gordon Comier). Both characters are survivors that Larry encounters while leaving New York City following the death of Rita Blakemoor (Heather Graham). 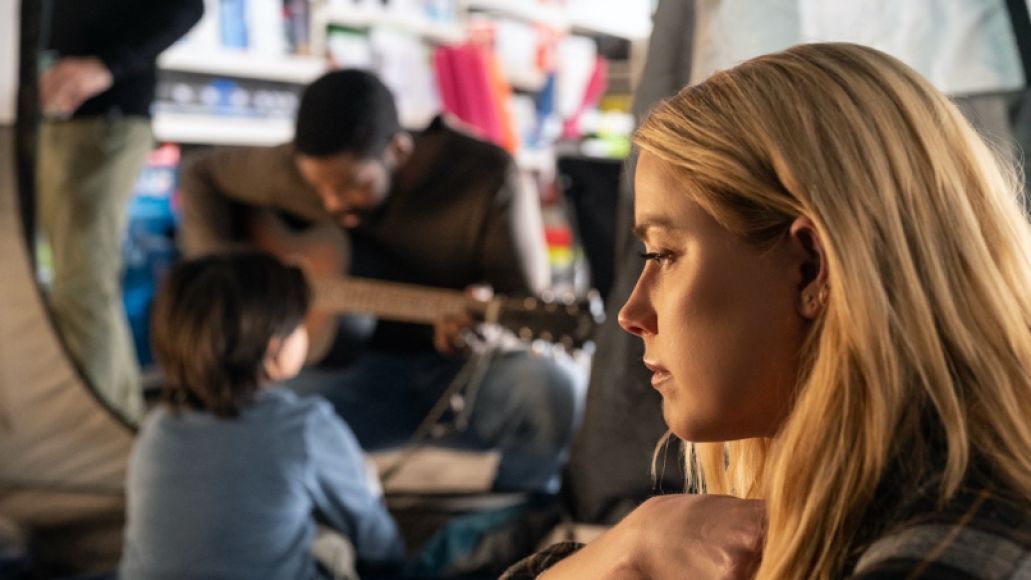 If you couldn’t tell from what you do get in “Pocket Savior”, there’s a subtle darkness to Nadine. For starters, she’s wearing one of those eerie stones that Flagg loves to hand out, so, yeah, that’s not good. What’s more, she visibly appears uneasy when Frannie Goldsmith (Odessa Young) later asks her about seeing Mother Abigail in her dreams (a requirement that admittedly feels far more authoritarian than the source material lets on). Oh, it doesn’t stop there, either, as we see before the end of the episode that Nadine isn’t looking to play a spirited round of SNL Trivial Pursuit, but a literally-spirited game of Planchette. Yikes.

As for Joe, he clearly isn’t a fan of Harold Lauder (Owen Teague). This kid may be quiet, but he speaks volumes with his body language, and he knows something is up with this series’ star incel. So, what’s his deal? Well, in the novel, he’s a feral child by the name of Leo Rockway, who Nadine finds alone and injured on her way out of New Hampshire. She helps nurse his infected animal bite, and, true to her calling as a teacher, finds a way to strike a connection with him. Whether or not the series will explore Joe’s backstory further remains to be seen, but he’s certainly an integral character, particularly with regards to Nadine.

Baby, Can You Dig Your Man? 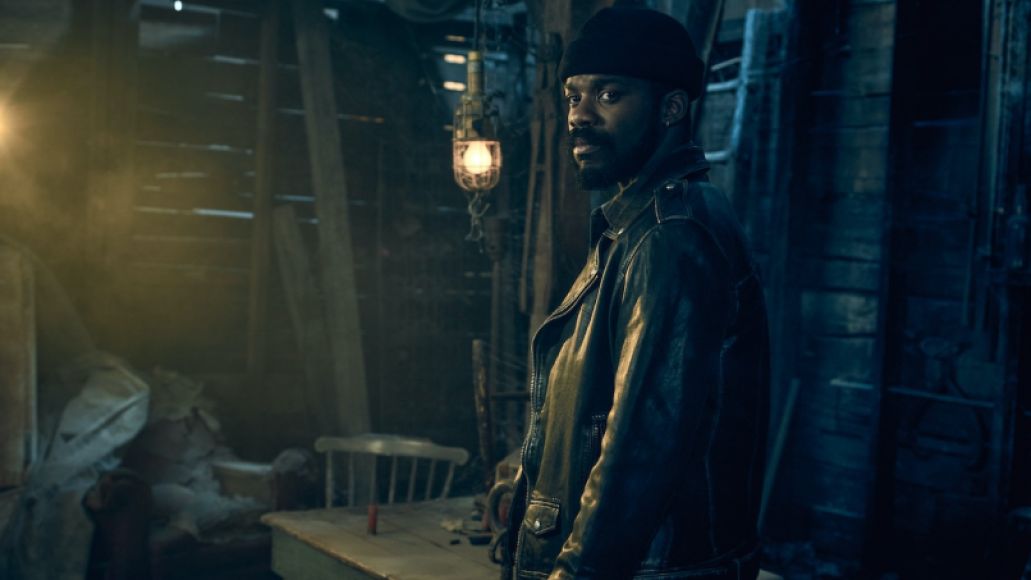 There’s a lot to unpack with Larry, so much so that an entire episode dedicated to him only scratches the surface. Here’s what we do know: He’s an aspiring rocker in the vein of Gary Clark, Jr., he may have stolen his hit song “Baby, Can You Dig Your Man?” from his roommate, he’s struggling with addiction, he’s a charmer with the ladies (he hooks up with at least two here; three, if you count Nadine), and he had a fractured relationship with his mother before she succumbed to Captain Tripps. Oh, we should probably mention he’s also being called upon by Randall Flagg — that’s not good for anyone.

Again, it’s a lot, and “Pocket Savior” does its best to put everything on the table. The most intriguing takeaway, though, is that this adaptation is adding more skeletons to Larry’s closet. In the novel, we come to realize — hell, even he does in all of his own personal meditations on the road — that he’s not a great person. He’s abandoned his family, he’s surrounded himself with sycophants, his addiction to fame and drugs has gotten the best of him, and the list goes on. But that’s what makes him so lovable — he’s a flawed a character, one who’s treading grey water — and this adaptation hammers that notion. 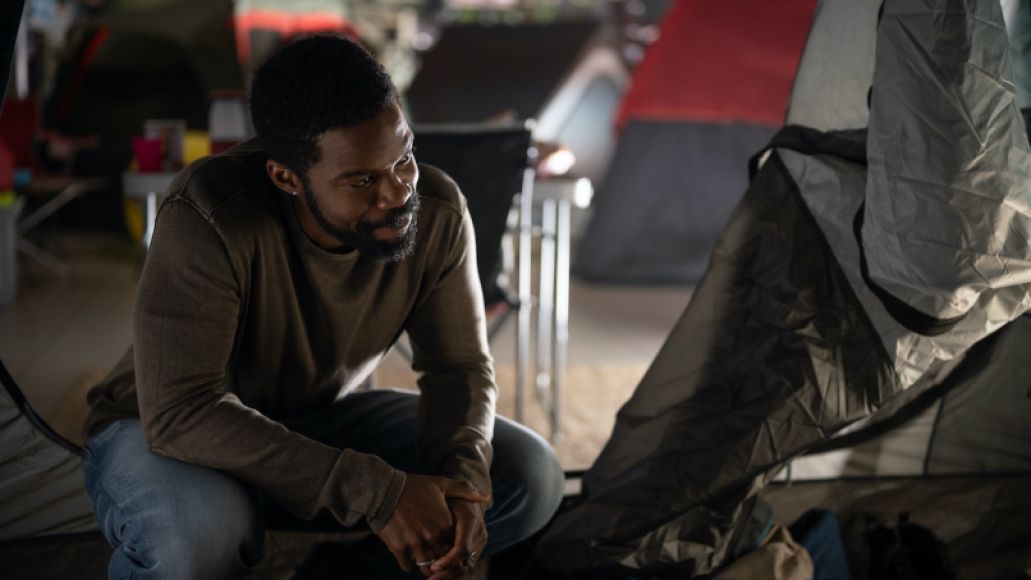 Even so, we dig Larry. His actions here speak volumes, painting a fluid portrait of a soul on the mend. This is exactly how Larry is presented in the novel: He’s the loner archetype that King uses to stress how everyone in his world has a choice. (Even if it doesn’t always seem that way. **cough** Nadine. **cough**) To this episode’s credit, what we see is a mixed bag: He’s a jerk on stage, he subtly confirms he stole the song from his friend (and then steals his drugs), and he even abandons Rita. But, he has a guilty conscience — he’s riddled with it, as we see in the sewer — and guilt goes a long way when it comes to turning a corner.

That corner for Larry is in Boulder, where he learns Mother Abigail is a big fan. Not of his music — well, maybe she loves “Baby, Can You Dig Your Man?”; who knows — but what he stands to offer her followers. As “Pocket Savior” hints, Larry is going to be a major factor in the development of Boulder. That energy is in the air when he first arrives and meets Stu, it carries on with him when he later arrives at Abigail’s house, and it’s all over the faces of his newfound friends when he starts finding a steadier footing in his newfound home. What that energy entails, and where his fate leads, will continue to unfold. 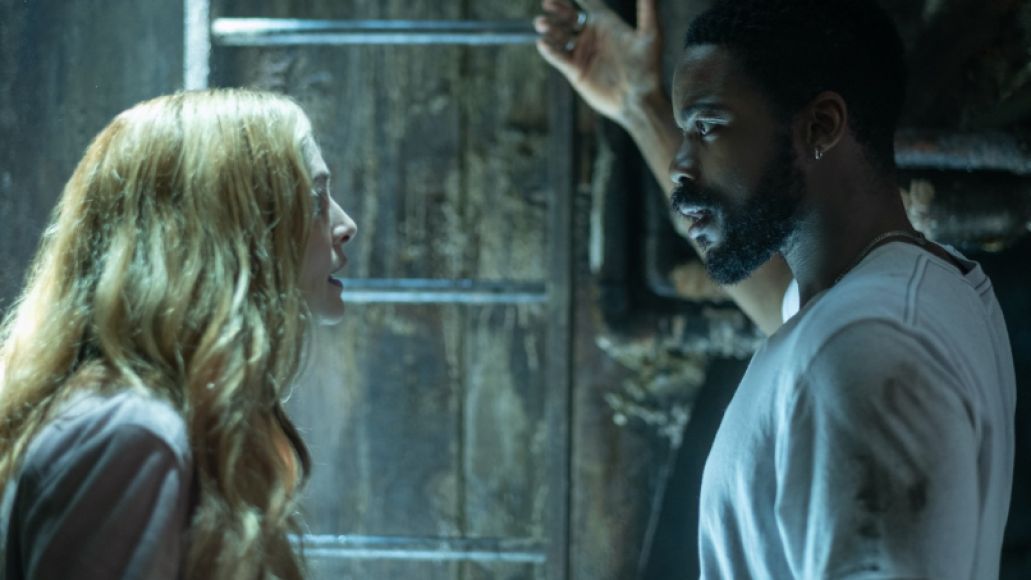 The greatest scare of “Pocket Savior” is also the greatest departure from King’s source material. Midway through, Larry and Rita climb down into the sewer in an attempt to escape a team of gun-toting rapists. “Just pretend we’re Ninja Turtles,” Larry jokes, before cosplaying as Raphael and ditching Rita altogether. What follows is a series of tense scenes that find Larry trudging through shitty water, evading rats, and floating past a hallucination of his dead mother. It’s all very gross — especially the scene with his mother; nearly Lynchian in execution — and not a single second of it is from the book. Nope. Not one.

Instead of a gross and stinky New York City sewer, Larry has to endure the pitch-black confines of New York City’s Lincoln Tunnel. Ask any Constant Reader and they’ll probably tell you it’s the scariest chapter of The Stand, chock full of grisly, post-apocalyptic imagery that all suggest terrible and awful situations. Mick Garris captured the scene for his 1994 miniseries — and it’s one of the more chilling moments of that adaptation — which may be why they opted for something different here. Then again, it could simply be budgetary issues as a wet sewer is a hell of a lot easier to conjure up than a cluttered tunnel. 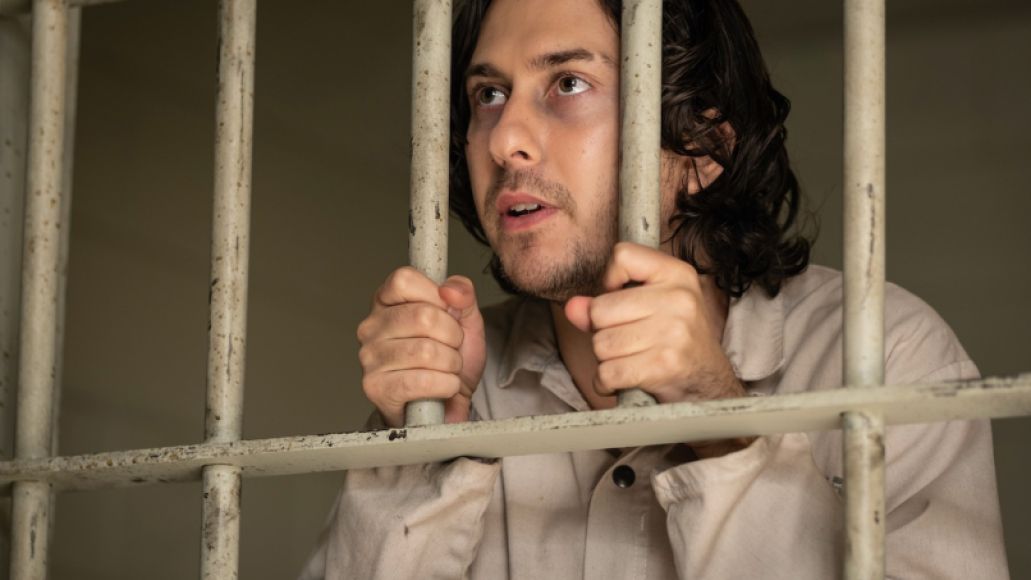 “Pocket Savior” is a two-fer in that we don’t just follow Larry. No, we also get the privilege of being locked up with Lloyd Henreid (Wolff). Wild at heart and reckless as a rebel, Lloyd is the flawed and tragic antagonist of King’s novel whose fate places him right alongside the one and only Randall Flagg (Skarsgard). As we see in his Weezer-scored introduction, this kind of pairing is regular business for Lloyd, who has a habit of pairing up with evil types. What makes Flagg such an exception to Lloyd’s previous partners in crime is the way he knows how to truly manipulate the guy — not just with deli sandwiches, but with pride.

The Dark Man’s grand arrival here captures this opportunistic sleight of hand. He’s a force that preys upon the meek, offering damnation disguised as salvation, but again, it’s always at their behest. The stone he gives Lloyd is a symbol of that commitment (keep that in mind for Nadine), and that commitment extends beyond worship. No, those who follow Flagg serve as chess pieces in his game, and Lloyd is one of his most valuable bishops. As his right-hand man, he’s going to be tasked with keeping Vegas in order, a task that will prove far more difficult than being left for dead in a cell with mashed rats and gnawed legs.

Was That an Easter Egg? 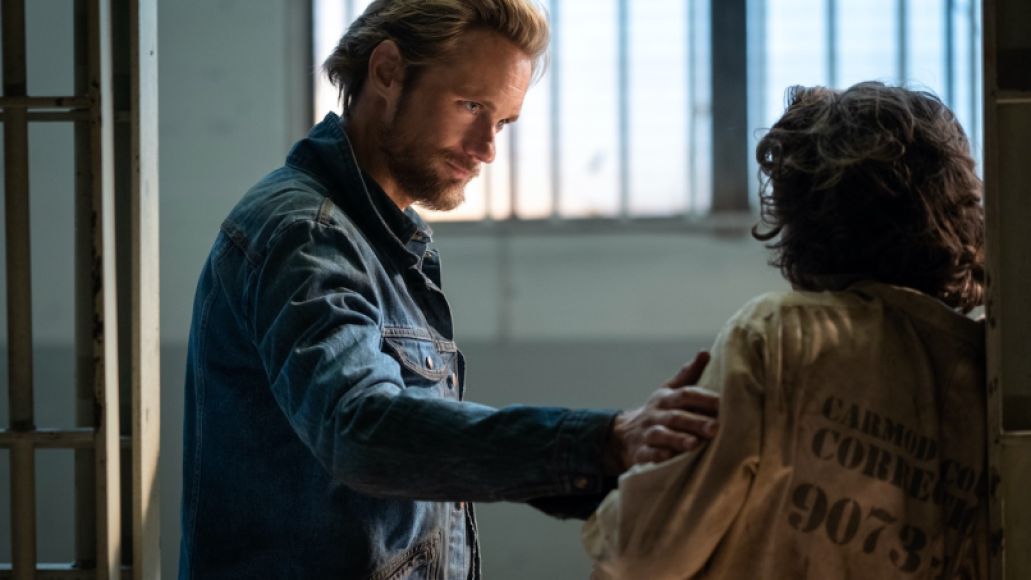 How could you not think about The Shawshank Redemption and It?

“Pokerize.” Lloyd’s jerkstore friend — Andrew Freeman in the book — sure keeps saying that word a lot in the convenience store. It’s a strange word, isn’t it? Well, it’s ripped right from the book, and said character’s nickname, Poke, in the 1994 miniseries.

Another deep cut pulled straight from the book is the creep in Central Park who tells Larry he’s going to jerk off on home plate in Yankee Stadium. Only King could come up with something that weird and yet also that intrinsically American.

On the back of Lloyd’s prison jumpsuit reads Carmody County Corrections. Needless to say, that prison must be hell, seeing how Carmody is a reference to the nightmare, religious zealot at the center of King’s novella The Mist. Sheesh.

Stephen King's The Stand, Explained: Larry's In the Car