Disney+ just aired the season finale of The Mandalorian’s second season, and what a finale it was. A big old dust-em-up with all manner of returning characters, some big, surprising (and not-so-surprising) cameos from old friends, and the bittersweet resolution of Din’s (Pedro Pascal) budding fatherdom with “the little green guy.”

For all its revelations, though, Chapter 16, “The Rescue,” directed by Peyton Reed, highlights the light and dark sides of the show’s sophomore season: it’s got a clear sense of the sandbox it’s playing in, but can’t keep itself from using the same toys over and over again. Read on to learn more. As always, it goes without saying that there are some major, major spoilers ahead. You must be cautious.

What’s the Plan for Getting Grogu Back? 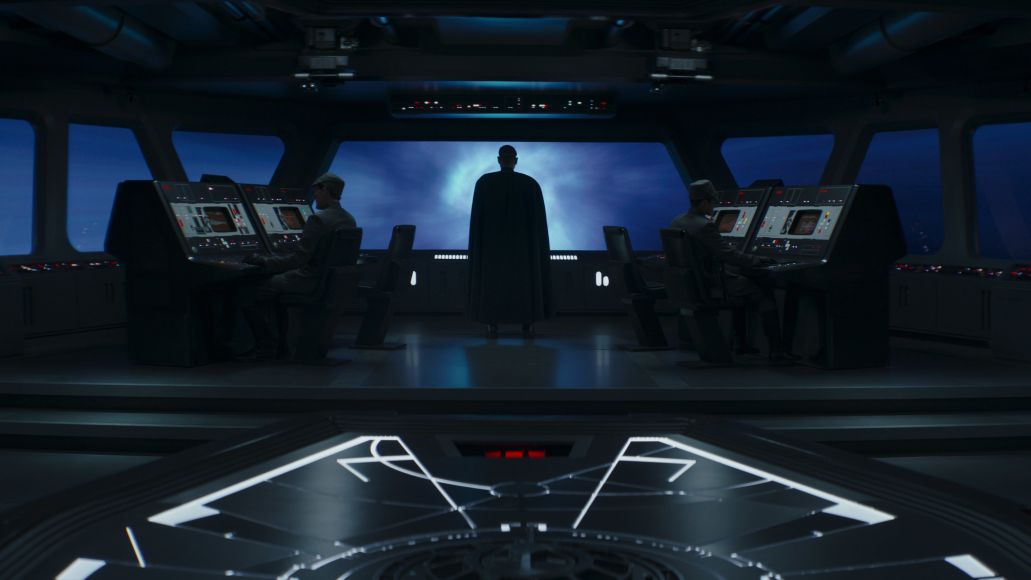 As we enter “The Rescue,” Din and the gang are already knee-deep in Phase One of the plan: capture Dr. Pershing (Omid Abtahi), the scientist from season 1 who’s had creepy, exploitative plans for Grogu, and use his Lambda-class shuttle to bluff their way onto Moff Gideon’s (Giancarlo Esposito) cruiser. In the showdown with an unusually gung-ho Imperial pilot (apparently a survivor of one of the Death Stars?), we learn he’s a “clone engineer,” which gives us a huge clue as to what the Empire wants with the Child in the first place. But of course, they’ll need help getting the boy back.

Two Mandalorians Walk Into a Bar… 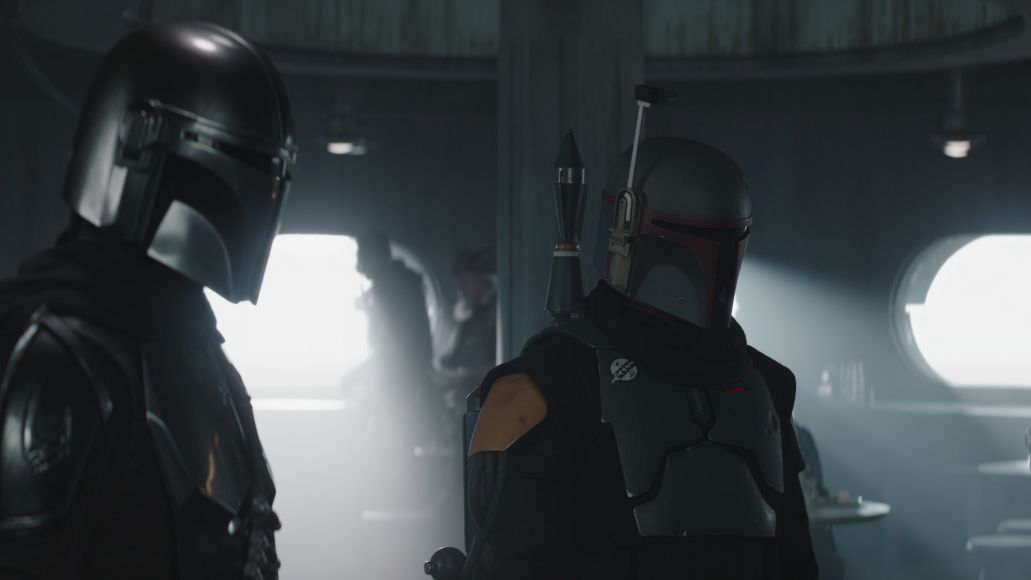 This means getting help from the only other Mandalorians we know: Bo-Katan’s (Katee Sackhoff) band of helmeted misfits. Din and Boba (Temuera Morrison) catch up to her in one of Star Wars‘ many fine cantinas, alongside Koska Reeves (Mercedes Varnado). (It’s unsaid, but presumably, their third Mandalorian pal perished in between adventures, unless he’s just taking a day off.) After a quick scuffle, including a neat little jetpack-assisted scissor maneuver from Koska, the two agree to help — especially since it puts Bo-Katan close to retrieving the Darksaber from Gideon. Plus, the prospect of adding a light cruiser to her fleet is too enticing to pass up.

We also get a couple of interesting Mandalorian Updates(tm): Bo-Katan recognizes that Boba isn’t a real Mandalorian, given that he has the same voice as Jango and the clone troops of eons past. Also, Boba tells us that the Empire “turned [Mandalore] to glass,” which means that Bo-Katan is just fighting to be the queen of the ashes of her homeworld.

(Also: “If that isn’t the Quacta calling the Stifling slimy” is such a Star Wars line.)

How Does the Raid on the Cruiser Go? 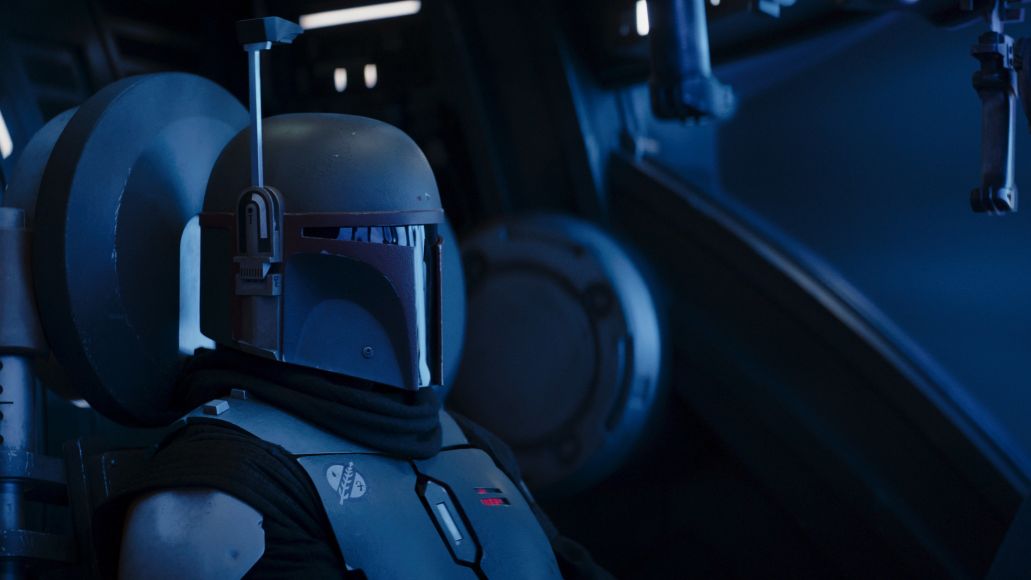 With little additional fanfare, Din and his Mando-heavy gang make their raid on the cruiser. It goes pretty smoothly, all told; Boba takes down their TIEs before jumping to hyperspace, while the shuttle crashes into the TIE launch bay and they clear the corridors, picking off stormtroopers one by one.

The one real wrinkle is the presence of the Dark Troopers, which Din barely manages to shoot off into space before having to take one down, Terminator-style. (Sidenote: getting a closer look at them, their armor really reminds me of Maximillian from Disney’s The Black Hole, almost certainly a deliberate homage.)

All told, the raid is relatively exciting, if a little disappointingly lacking in tension: if the last week has taught us anything, it’s that Disney will refuse to let any character die if they think they can squeak a spinoff from them. (More on that later.) Still, they easily take the bridge, only to find that Moff is missing.

What Happens to Moff Gideon? 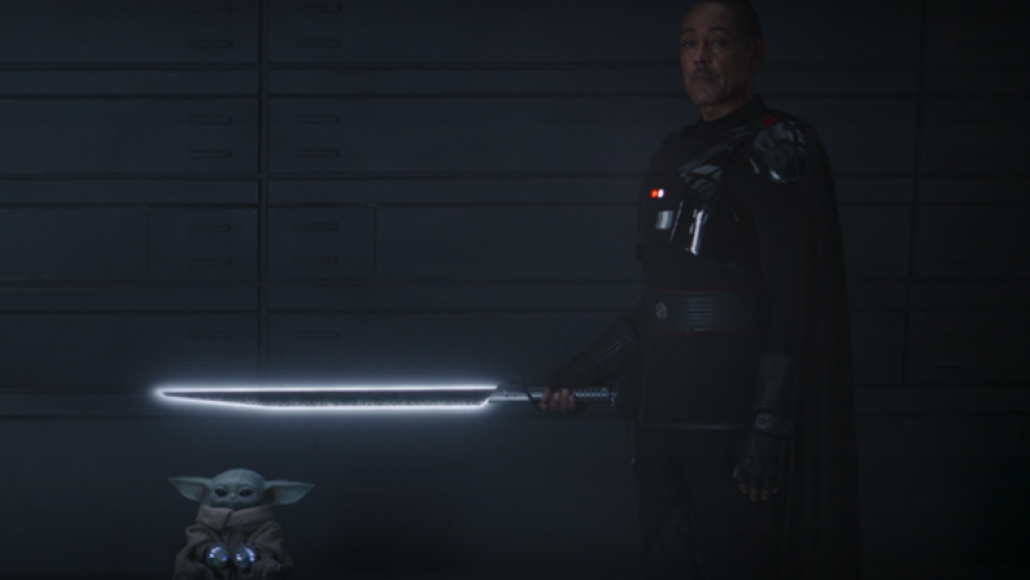 Turns out Gideon is chilling with his new bro, Grogu (brogu?), and holds him at Darksaber-point when Din finally comes to retrieve him. At first, Gideon acquiesces: “I’ve already got what I want from him.” That’s when the plan for Grogu finally clicks: they want to take his midichlorian-infused blood, of which Gideon already has plenty of samples.

For what, though? To clone more Grogus? To make more bodies for Palpatine? To inject it Peter Thiel-style and get Force powers? We don’t get many more details before Gideon and Din get in a saber-on-beskar brawl that ends, predictably, in Din besting his opponent and taking the Saber.

Who Gets the Darksaber Now? 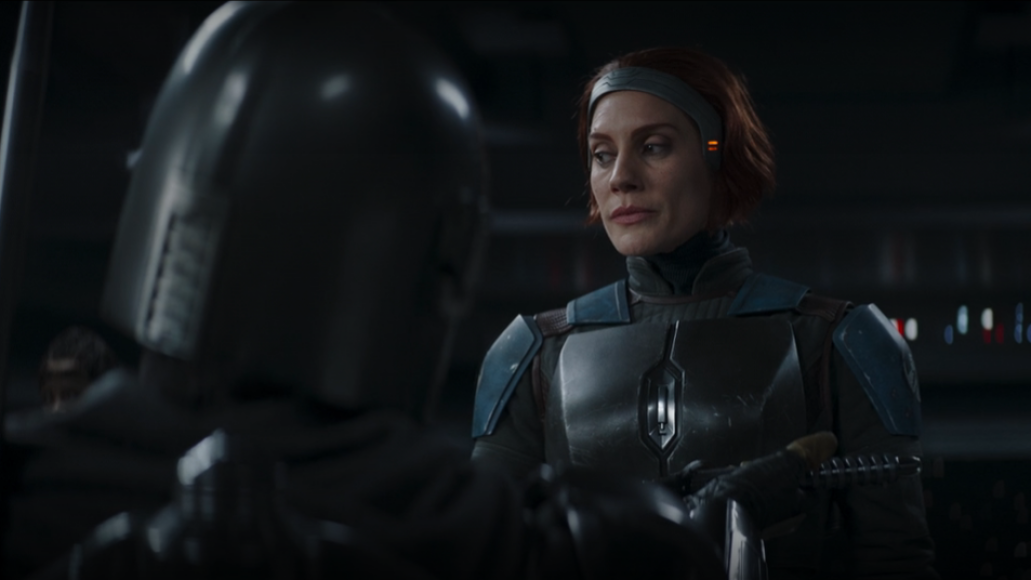 Din brings Gideon to the bridge, Darksaber in hand and victory assured. But in classic Ben Linus from Lost fashion, Gideon still has more strings to pull: You see, the Darksaber can only be truly transferred from one owner to another through defeat in combat. Din doesn’t want it, just the kid, but it can’t be freely given. It has to be earned. (Though it escapes me why Din doesn’t just let Bo-Katan kick his ass a little bit and give her the saber; the fact that Gideon’s still alive didn’t seem to invalidate that particular transfer of ownership.) This might prove to be a neat little wrinkle for next season — the conflict over who truly gets to restore and rule over Mandalore, especially now that Din is a viable candidate for the throne.

But we don’t get a lot of time to ruminate over that before the Dark Troopers Din sucked out into space zap back into the ship and start trying to bash their way onto the bridge. Things look grim for our heroes. But suddenly, an X-Wing appears, lands, and a black-cloaked figure with a green lightsaber and a gloved hand starts making quick work of the Dark Troopers. We guess who it is minutes before we even see his bizarre, de-aged CG face — after all, his dad mowed through his enemies with a lightsaber in a similar fashion.

Luke Skywalker Is Back?! 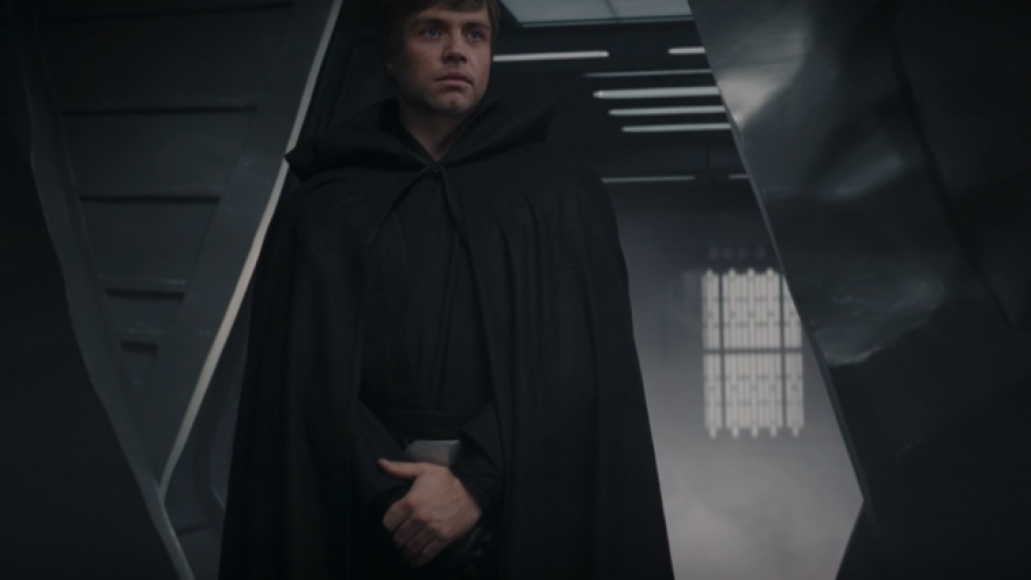 Yup, Luke’s back, with a grotesquely de-aged CG face that hearkens back to his outfit and look in Return of the Jedi but just unsettles the blood the same way CG Peter Cushing did in Rogue One. Mark Hamill returns to provide the voice, but it’s pitched up to sound younger, and just sounds canned, especially through the lock-jawed mouth of CG Luke. It’s a moment clearly intended to inspire fist pumps and shouts in hardcore fans, but the moment rings false, especially given how stiff and artificial the rendering of the character is.

ATTN: DAVE FILONI AND JON FAVREAU: Just use Sebastian Stan. You’ve already got him on contract! We’ll get over the recasting. This is worse. 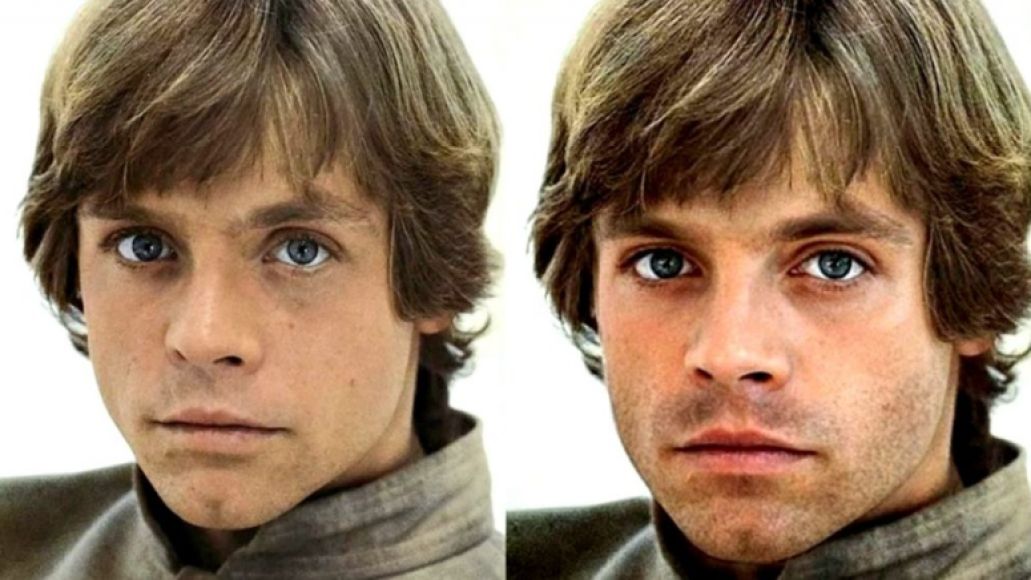 The unearthly golem of Luke Skywalker isn’t just here to save the bacon of a few Mandalorians and their gun-toting pals, though; he’s here for Grogu, presumably to bring him into the first class of Jedi students he plans to train. (Does this mean that Kylo and the Knights of Ren will end up scorching him a few years down the line? One hopes not.)

Sure, this was all prefaced by Grogu’s communion with the Force on Tython earlier this season. But I was hoping it’d take a little longer for the Jedi to find him, not snatch him away from Proud Papa Din at the moment of victory. The Mandalorian season 2 was ostensibly about an isolated man building a family of his own, complete with a son he could care for. Now, he has to give him away just like he was going to all season. It just doesn’t seem worth the trade-off for a universe-shrinking cameo and a cutesy moment between the Child and R2-D2.

That said, Din’s goodbye (or, one hopes, a see-you-later) to Grogu is suitably tearful, no small thanks to Din taking off his helmet so Pascal can give us his best puppy-dog eyes as he parts with his little green friend. Ludwig Goransson’s music swells, li’l Grogito caresses his cheek, and there’s not a dry eye in the universe. I just wish it was a little more earned.

How Does the Finale Wrap Up Season 2? 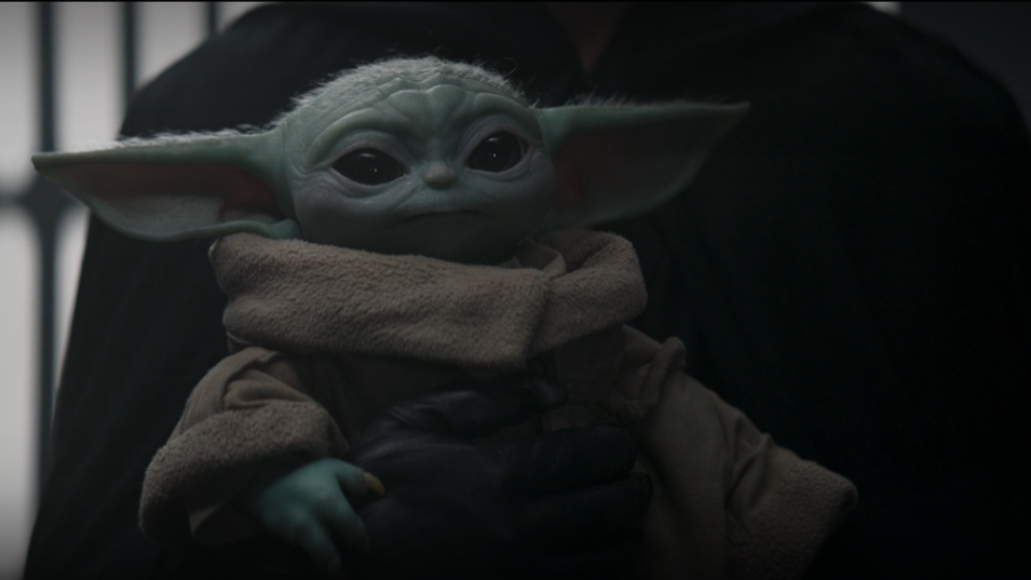 As enjoyable as season 2 of The Mandalorian has been, “The Rescue” feels emblematic of its worst excesses. At its best, it’s been a scrappy, complicated look at the moral grey areas of the Star Wars universe, widening the scope of the franchise and finding room to tell different kinds of stories. But this season has seen the show lean further and further into the existing well of already-iconic characters, from Boba Fett to Ahsoka Tano to Luke Skywalker. It’s neat in an “I recognize that!” kind of way, but the moment fades and you’re left to wonder whether that was anything more than rote fan service.

It makes the universe feel small; in the course of sixteen episodes, Din Djarin has gone from armored nobody making a living on the Outer Rim to best friends with Boba Fett and a joint custody agreement with the franchise’s literal protagonist. Also, as it currently stands, he has a rightful claim to rule his entire people. For a show whose most interesting moments lie in the kinds of characters Dante and Randal used to worry about in Clerks — the everyday people just doing their jobs amid the galactic good-versus-evil struggles we see in the films — “The Rescue” paradoxically gives the show’s title character too much importance. I’m ready for him to just be A Mandalorian again.

What’s The Book of Boba Fett Going to Be About? 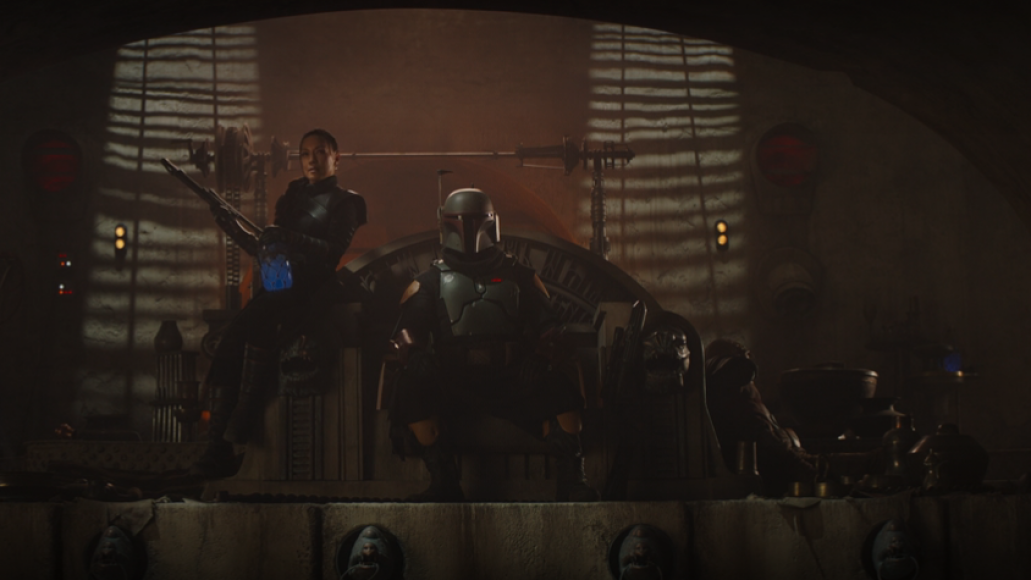 But he’s not the only Mandalorian we’ll get to follow next year: the end-credits stinger sees Boba and his shadow/sidekick, Fennec Shand (Ming-na Wen) blast their way into Jabba’s palace and depose a Falstaffian Bib Fortuna, who I guess survived the palace barge explosion in Jedi, taking his throne. (It’s a big day for Mandos getting job promotions.)

The positioning of the stinger, and its ostensible scheduling concurrent with season 3 of The Mandalorian, leaves us wondering whether it’s going to be another spinoff or — horror of horrors — Boba will be The Mandalorian, and this is a gear shift for the series. I sure hope not; Boba’s good only in small doses, and I’m already deeply skeptical of the scores of Star Wars spinoffs that are coming to Disney+ next year.

But as the Star Wars TV empire expands, we’ll just have to see whether The Mandalorian season 2 was the nostalgia enema it often felt like, or a portent of fanservicey things to come. In a perfect universe, we’ll get back to shows that don’t feel like backdoor pilots for a bunch of other shows we’ll be too exhausted to watch.

What's Next for Star Wars? The Mandalorian Season 2 Finale, Explained