As Carole King’s groundbreaking album Tapestry turns 50, Legacy Recordings is celebrating with a vinyl reissue, a new single called “Out in the Cold”, a new music video for “It’s Too Late”, and much more. After reading our classic review of Tapestry, please check out and enter our exclusive giveaway.

Carole King might be best described as a songwriter’s singer-songwriter. That’s in part because she penned her first hit song at only seventeen years old. It’s also because she wrote — mostly alongside songwriting partner and first husband Gerry Goffin — more than 100 charting songs for other artists. Some would even say this distinction fits because two lads from Liverpool, who would also go on to change music forever with their songs, once admitted that all they ever dreamed of was being like Goffin and King. Still, I think there can be no better example of King being the consummate songwriter than the 2015 Kennedy Center Honors, at which she was recognized for her contributions to American culture. With Michelle and Barack Obama on her left and George Lucas on her right, King nearly fell out of the presidential balcony in shock when Aretha Franklin walked onstage, sat at a piano, and began singing the first lines to arguably King’s most beloved composition: “(You Make Me Feel Like) A Natural Woman”. Throughout the performance, King blew kisses to Franklin, gestured emphatically toward the stage with each refrain, and wore her admiration visibly as she smiled through tears. It’s a song that Franklin had long ago made her own — one that some in the audience might not even have known King had written — but there King was, absolutely in rapture as the Queen of Soul brought those words and notes to life as only she could. For King, it wasn’t about the spotlight. It was all about the music and those who helped her realize it.

And that’s an impressive list of people. One that began with her mother, who sat King down on a phone book atop a piano bench at age four for music lessons; continued in the late ’50s as she made demos with Paul Simon (yeah, that one); later found her collaborating with fellow icons of the singer-songwriter movement James Taylor and Joni Mitchell; and, prior to that, partnering with lyricist Gerry Goffin, who King first met when she moved to New York at sixteen to audition for producers. It’s an understatement to say that Goffin and King would go on to write some significant songs together. It’s far more accurate to say that they changed popular music forever through their decade-long partnership in the ’60s. Hits like “Will You Love Me Tomorrow” (The Shirelles), “The Loco-Motion” (Little Eva), “Up on the Roof” (The Drifters), “One Fine Day” (The Chiffons), “Pleasant Valley Sunday” (The Monkees), and, as mentioned above, “(You Make Me Feel Like) A Natural Woman” (Aretha Franklin) not only marked the time, but went on to influence future generations and become timeless themselves. It’s almost hard to believe that what came next for King would, in many ways, overshadow this unprecedented decade of songwriting success.

King had recorded several singles in the late ’50s and early ’60s to mostly little fanfare. By 1966, she had largely set aside her recording ambitions to keep up with the demand for Goffin-King compositions. However, in 1970, King emerged from the studio with the aptly titled Writer, her first-ever full-length album. Despite Joni Mitchell-like cover art and James Taylor providing acoustic guitar, it’s an effort that went largely ignored until after Tapestry created a fervor for King’s work a year later. In hindsight, Writer sits right at the outset of the great singer-songwriter movement of the ’70s, the opening number, “Spaceship Races”, sounding more like the rock and roll coming out of San Francisco at the time than the spare, confessional style that would characterize this movement and win Tapestry such a devoted audience. A mere year later, King would enter the studio again, this time with Lou Adler producing and a newfound confidence — not only in her songs but in herself — that makes Tapestry sound so natural and unforced. Both Taylor and Mitchell happened to be recording at an adjacent studio and wound up singing backup on “Will You Love Me Tomorrow?” It’s the type of serendipity so beautifully woven into what we all now agree is King’s indelible masterpiece.

Some albums fit snugly like an old sweater or favorite pair of blue jeans after we’ve heard them enough times. Tapestry is the rare record that feels that way before we even remove it from its sleeve for the first time and place it on a turntable. The familiarity (and intimacy) begins with the album art, a photo of King in relaxed, even cozy, dress on a bench beside a window. We instantly feel at home in that room with those drapes, a cat we swear we’ve cuddled before, and King, hair long and curled (maybe not even brushed that day), looking directly at us, as opposed to, say, longingly out the window. It’s very much in the same vein as the early album covers of her friend and collaborator James Taylor. Her eyes and body language invite the listener into the album, promising something simple and good during our visit — the way a host might offer brown bread and hot tea to guests. However, what King actually gives us is so much more: a collection of songs (and performances) as familiar with the innerworkings of our minds and hearts as we might be with the snags in an old living room carpet or the pattern of a hallway tapestry we’ve stared at our entire lives.

That Tapestry feels like an intimate conversation between dear friends is, of course, a testament to both the quality of King’s songwriting and sincerity of her performance. The truth is that she was recording songs — both old and new — from an American songbook that she was still in the process of composing. For instance, King lays down her own version of “Will You Love Me Tomorrow?”, a song she had penned more than a decade earlier for The Shirelles. Not only had they turned King’s song into a contemporary classic in that span, but they had also used the song to become the first Black all-girl group in history to score a No. 1 hit in the United States. Talk about a long (and historically significant) shadow cast by one’s own song. However, by slowing the song down and dropping the lush Motown strings in favor of piano and acoustic guitar, King, with guitar and vocal help from James Taylor and Joni Mitchell, gives her rendition a more mature feel, the song’s lovers perhaps in need of rekindling rather than trying to preserve an initial spark. Equally daunting was the fact that Taylor (“You’ve Got a Friend”) and Barbara Streisand (“Where You Lead”) both had huge hits with covers of King’s songs just a few months after they appeared on Tapestry. In some ways, it feels like Carole King the songwriter was in competition with Carole King the recording artist.

But Tapestry didn’t spend more than 300 weeks on the charts, set records for time in the No. 1 spot, or sell millions of copies simply because King brought great songs to the table. No, Tapestry is the warm, intimate rite of passage that it is because King found the voice needed to perform them. As the opening piano of “I Feel the Earth Move” pounds out a groove, we can almost picture King playing and singing barefoot in the dirt to get that earthy feel as she uses the imagery of natural forces to testify about her man. An album earlier, this song might’ve eaten her up or seen her voice buried in over-production, but here she summons the powers needed to tame it. Likewise, King keeps her chin up and makes us believe the daily affirmation of “Beautiful”, belts out just the right Sunday notes to help us keep the faith in “Way Over Yonder”, and miraculously finds a storytelling voice that doesn’t make the ballad of “Smackwater Jack” and that “shotgun in his hand” feel out of place on an album that’s largely a personal journey. We feel her ache for the familiar on “Home Again” and, conversely, bear witness to an almost religious devotion to abandon all we know on “Where You Lead”. Somehow, King’s voice always seems to provide the very thing needed, no matter how different those needs are from song to song.

At its very best, Tapestry affirms what we already know about ourselves and our own journeys. We know what the true longing of “So Far Away” feels like — it’s right there in the slight quiver as King sings, “How I wish I could” — and that all the wishing in the world can’t change matters. In fact, as King continues, despair sets in at the thought that she’s bound to miss out on far more than just the person she misses as she waits. It’s absolutely brilliant how King walks listeners through shifts in emotion, making a phrase as simple as “so far away” mean something altogether different by altering her delivery. Apart from maybe Ben E. King’s “Stand by Me” or Bill Withers’ “Lean on Me” , no song in the English language better understands our need for a shoulder than “You’ve Got a Friend”. It’s hard to listen to without thinking of the person or two in our own lives who would actually be there for us should we call. And, of course, “It’s Too Late”, which King wrote with help from lyricist Toni Stern, crams all the denial, pain, regret, and gratitude of a loving relationship running its course into a sad light jazz number with a gorgeous chorus that simultaneously absolves both parties while making them feel worse. If there’s a song that captures the tangled emotional mess of a fading relationship better than this one, I’ve yet to come across it.

Tapestry ends with “(You Make Me Feel Like) A Natural Woman”. It’s tempting to think that King had to build up to stepping into the daunting footsteps of Aretha Franklin, but as those classic opening lines cry out from King (“Looking out on the morning rain/ I used to feel so uninspired/ And when I knew I had to face another day/ Lord, it made me feel so tired”), we don’t think for a moment about the Queen of Soul. King has drawn us into her version and her story with her voice. She’s the one who takes us from abject hopelessness to elation in the span of a simple, building pre-chorus. We listen to the closing moments of Tapestry and realize the title of the song says something so very true about this songwriter’s singer-songwriter, this performer, this young woman sitting next to the window with long, curly hair and a gray cat: She’s an absolute natural.

Essential Tracks: “(You Make Me Feel Like) A Natural Woman”, “I Feel the Earth Move”, and “It’s Too Late” 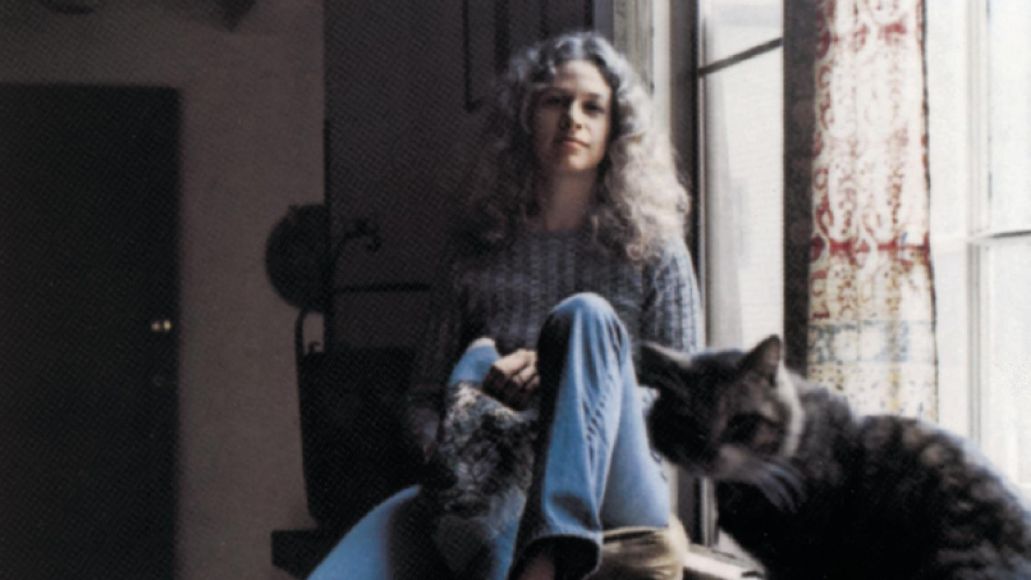 Carole King's Tapestry Continues to Unravel the Mysteries of the Heart Half a Century Later: Classic Review