The Pitch: When Billie Eilish was 13 years old, she posted a video of herself singing her song “Ocean Eyes”. Three years later, in 2018, she was already on a fast path to superstardom, and director R.J. Cutler somehow knew to pick up his camera. This is the starting point to his Apple TV+ documentary, Billie Eilish: The World’s a Little Blurry. Cutler, whose resume includes documentaries such as The September Issue and Belushi, couldn’t have predicted the kind of year he was about to capture.

By circling around Eilish’s 18th year, Cutler documented the writing, recording, release, and reaction of her first full-length album, When We All Fall Asleep, Where Do We Go?. He then continued to capture Eilish’s subsequent sold-out shows and festival appearances, radio and magazine interviews, and six Grammy Awards. It’s a lot to tie together, and yet these events make up only a fraction of the conflicts and experiences viewers witness during the documentary’s hefty runtime of two hours and 20 minutes.

The time is well spent as Cutler moves past the music to convey the life of a teenage girl. Influenced by past concert documentaries like Gimme Shelter and even Eilish’s favorite series, The Office, the filmmaker lets the talking heads tell the story. Eilish, her brother and producer, Finneas, and her parents, Maggie Baird and Patrick O’Connell, are front and center the whole time and without any additional commentary. Though, we do get the occasional knowing glance at the camera à la Jim Halpert.

Same Little Backyard: When Eilish is a popstar, she’s still a teenager, and when she’s a teenager, she’s still a popstar. Nothing conveys this more than the fact that When We All Fall Asleep, Where Do We Go? was recorded in Finneas’ bedroom in the siblings’ childhood home in Los Angeles. The World’s a Little Blurry gives viewers access to all of it, from Eilish recording “bury a friend” near the height chart on the wall to Maggie putting in a load of laundry the morning after Billie’s record debuts at No. 1 in 37 countries. “I’m nominated for six Grammys, and I’m still in the same little, stupid backyard!” Eilish jokingly announces at one point. Despite the teasing bitterness, she doesn’t seem to want it any other way.

Billie and Finneas have a distinct relationship that Cutler captures with aplomb. Their laughter is infectious when they perfect a handshake or record the now-iconic album opening (“I have taken out my Invisalign and this is the album”), but the mood shifts when professional interests come into play. Throughout the film, their mom and dad moderate their many arguments, oscillating between parents of a brother and sister to managers over an engineer and vocalist — all in their home kitchen. Maggie is her daughter’s greatest defender, however, supporting Eilish’s decision to denounce drugs and alcohol, even when a member of her team suggests she might regret it. She also ensures that Billie is taking care of herself, all while her label demands more. “It is a horrible time to be a teenager,” she tells Eilish empathetically.

One of many heartfelt highlights of the film is when Eilish passes her road test, and her dad watches her drive away by herself for the first time. “For her, it’s the future. Everybody feels that way when you get a license,” he says, looking down at his hands. “Then we just live in denial, as always. You can’t think about it too hard, or you won’t let her do anything.” He heads back into the house, and Patrick and Maggie immediately regret that Billie never downloaded the app “Find My Friends”.

Broken Body: In many ways, to be a teenager is to be in pain; Billie Eilish is no exception, and Cutler demonstrates that gently. “My body is always gonna be broken, even if I heal it,” Eilish insists to her mother following an ankle sprain that nearly prevents her from performing a concert in Milan, one of the climaxes of the film. It’s one of the many painful instances of Eilish’s body betraying her in The World’s a Little Blurry. Elsewhere, shin splints make it hard for her to walk (let alone jump around during a performance); her oft-couched Tourette syndrome is discussed; and we watch her spend unglamorous hours in massages and physical therapy between shows. “Everything I’ve ever loved I’ve had to quit,” she says, referencing a previous hip injury that ended her dancing career. Eilish never quits, though.

What threatens to derail Eilish the most, however, is the least visible. Mental illness serves as one of the main characters of the film. It’s sprawled out in the lyrics and drawings in Eilish’s notebooks, and it’s all over her face, particularly after what she considers to be a disappointing Coachella performance. Interviewers love to ask her about it, wondering why her songs can’t just be happy. “Are you seriously implying that you’d jump off the roof?” Maggie softly asks Billie when she hears the song “listen before i go” for the first time. Billie nods and continues, “I feel like it’s something I wanna have said. This song is the reason I don’t. Having this way of saying it instead of doing it is better.” The film suggests that this is what keeps her from quitting. 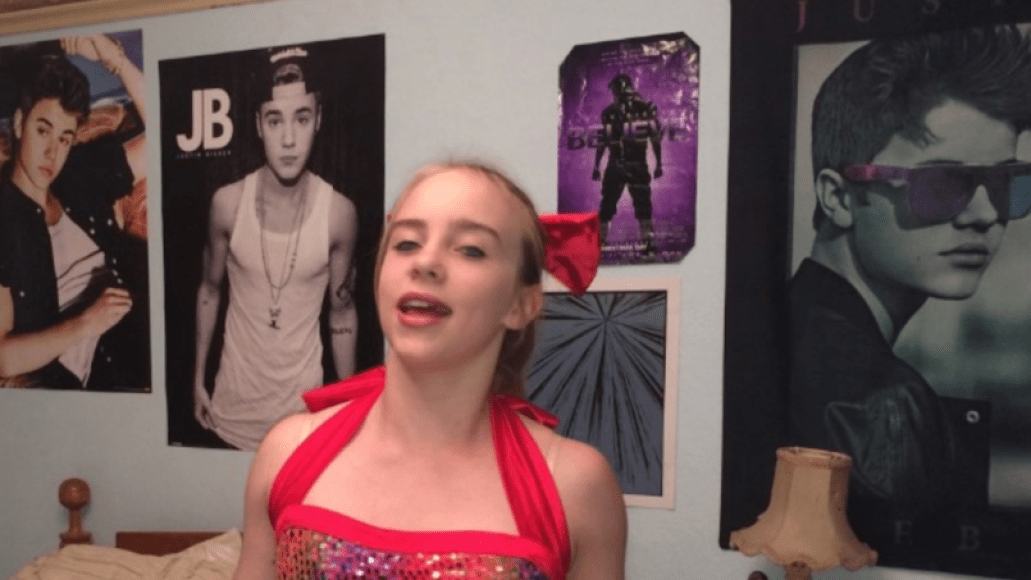 I Love You: Rather unexpectedly, The World’s a Little Blurry is a love story. Although it takes a look at the relationship between Eilish and her now ex-boyfriend, Q, the real connection is between Eilish and Justin Bieber. It’s a romance that technically started when she was 12 and considered the popstar to be her “first love.” “I remember sobbing into a pillow, because I thought I’m never going to feel this way about anyone,” she mentions during a radio interview. Cutler cleverly contrasts this anecdote with clips of Eilish and Q: What starts out as depictions of the couple’s loving embraces and sweet conversations turn into a lonely Valentine’s Day and distant phone calls. For anyone who has ever put in the most effort throughout a one-sided relationship, it’s hard to watch at times.

But Eilish and Bieber’s relationship grows. What begins with a direct message on Instagram from Bieber to Eilish — asking to work together; he later jumped in on her “bad guy” remix — continues during Ariana Grande’s Coachella performance where the two singers finally meet. It’s the most emotional and raw moment of the film, and it’s moving enough for both Eilish and Bieber to gain (or, in Bieber’s case, regain) your respect and empathy. Obviously, the relationship between the two singers remains platonic, but it manages to demonstrate one of the greatest love stories between a fan and an artist ever told.

Of course, in this case, that fan was Billie Eilish, who gained millions of fans of her own, and that artist was Justin Bieber, who became one of them. “You know exactly how it feels to be him in that situation,” Finneas says after the meeting. It brings to mind one of the first scenes in The World’s a Little Blurry, when one of Eilish’s fans gets hurt during a concert. “You guys need to be fucking okay, because y’all are the reason I’m okay,” she says. Conversely, Justin Bieber seems to feel the same way, and the resulting scenes are both wholesome and refreshing.

The Verdict: The World’s a Little Blurry is an honest depiction of what it’s like to be a teenage girl. What makes that successful portrayal even more moving is that this particular teenage girl’s life is so untypical to begin with. Although the film runs long, it’s hard to point out any scene that could be cut, because every moment adds to the collage that is Billie Eilish’s world. That blurry world, and its resulting film, can be summarized as many things. It’s a pop star rising to fame and falling in and out of love. It’s a girl learning to drive and a testimonial for Invisalign. It’s a family who unconditionally loves each other and the fans who unconditionally love music. It’s a teenage girl and all of the love that surrounds her, even when she might not be able to see it.

Where’s It Streaming? The World’s a Little Blurry is available Friday, February 26th via Apple TV+.