The Pitch: “Sometimes I wonder if life is wasted on me,” Cherry (Tom Holland) drawls wryly to us, godlike and incessant in his narration. When we meet him, he’s holding up a bank, and it’s not the first time. But how would a nice young man fall into such disrepute? From there, we rewind to see the life choices Cherry has made that led him to this point — from his furtive romance with a young classmate named Emily (Ciara Bravo) to the torment and torture of his days as an Army medic in Iraq, to the subsequent opioid addiction that would lead him to a life of bank-robbing to fund his drug habit.

CHERK ‘Em If You Got ‘Em: In many ways, it’s going to be hard for Cherry to overcome its first real brush with public notoriety — a strangely-glitched version of the poster that messed up the title font so no one could read what it said, leaving Twitter aflame with guesses as to how the movie was supposed to be pronounced. Cheerk? Chalk? Chsekf? Even after the real title was cleared up, good luck finding anyone with a Twitter account who’ll think of it as anything but CHERK.

When you view the final product, it feels strangely fitting; based on the semi-autobiographical novel of the same name by Nico Walker, Cherry is similarly scrambled, a scatterd mish-mash of influences that dashes about to do everything it can to seem gritty and sad and important, but overshoots each of those goals in handy order. In each of its five acts (helpfully labeled in big, blocky, attention-grabbing font), Cherry’s life moves from one pastiche to the next — Harmony Korine, Full Metal Jacket, Jarhead, No Country for Old Men. Directors Joe and Anthony Russo (finally taking a break from the hemmed-in gloss of the Marvel Cinematic Universe, and clearly trying to differentiate themselves as Real Artists) even throw in a bit of Michael Bay, much of Cherry’s post-war hijinks mirroring the pitch-black comic cynicism of Pain & Gain.

Cinematographer Newton Thomas Sigel soaks the screen in honeyed, music-video compositions, drifting around actors and throwing up so many fisheye lenses and lens flares you start to ache with the earnest ain’t-i-a-stinker jaundice of it all. Probably the film’s major saving grace is Henry Jackman’s glossy, discordant score, which flits between the perverse romance of Cherry and Emily’s mutual descent into darkness and bizarre instrumentation that hammers home the clanging mayhem of the story’s more violent turns. Still, these elements, along with Jeff Groth’s demonstrative editing, end up leaning into the Russos’ overwrought approach. There’s a difference between effortless style and trying too hard, and Cherry leans into the latter more often than not. 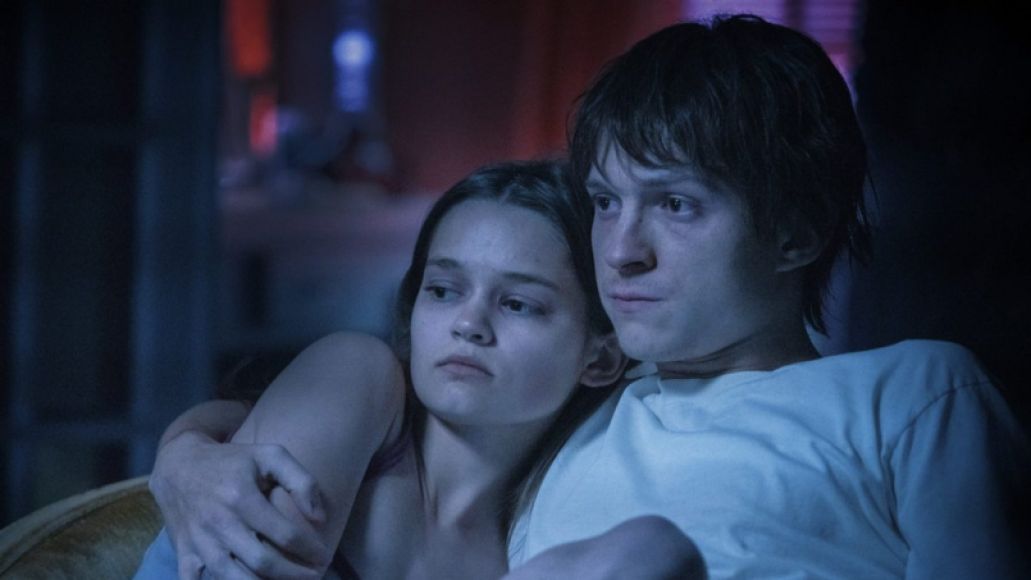 Far From Home: So much of Cherry hinges on its lead character, and Holland’s clearly making a meal out of it, using flicks like this and The Devil All the Time to try and transition into the world of Serious Grown-up Character Actor. Unlike his contemporary Robert Pattinson, though, he needs a little more space outside his franchise work to really grow into the kind of performer Cherry requires. Granted, there’s a method to the madness in casting such a boyish presence in such a dark role; Holland plays Cherry as a little boy in big man pants, calibrating wide-eyed vulnerability and agonized cynicism as the script demands. But he’s still got to hone those rough edges, and the Russos need to lean a little less on the novelty of seeing Tom Holland swear, masturbate, and do drugs.

Long story short, Holland feels ultimately miscast, even as the exercise is meant to see him playing against type. The cast around him fares little better; Cherry and Emily’s relationship is an awkward, noxious mess of codependency that plays its hand far too early, and the rest of the cast flits in and out of Cherry’s life too intermittently to make a real impression. 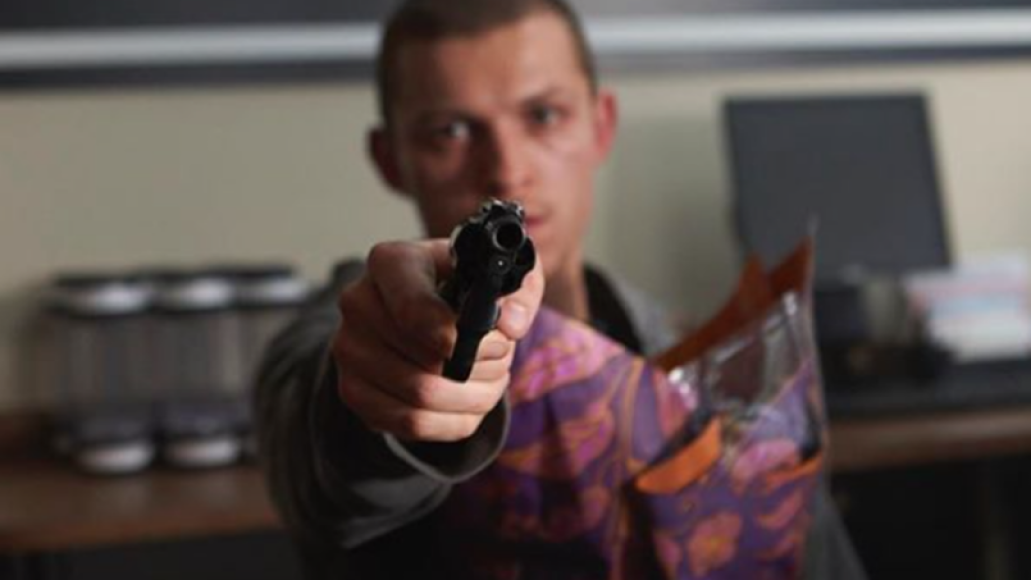 Infinity War Is Hell: The thing you’ve gotta know about Cherry, though, and the thing it really wants to assert about itself, is that it’s edgy, man. Problem is, Cherry‘s worldview is firmly entrenched in the kind of eye-rolling macho philosopher nihilism Joe Rogan’s spent years cultivating. Cherry’s incessant narration happily and smarmily informs us of the futility of life, the childishness of the military (in one admittedly inspired bit, Cherry envisions himself and his fellow boot camp trainees as literal children stomping around a training ground in big-boy camo), and how alluring and dangerous the world of drug addiction can be. It’s that evergreen Onion headline writ large — Heartbreaking: The Worst Person You Know Just Made a Great Point.

The Russos, Walker, and screenwriters Angela Russo-Otstot and Jessica Goldberg have their hearts in the right place: They’re right, the military does chew up and spit out poor people in endless, traumatizing wars, and the opioid crisis is something that needs addressing. But they also think Cherry’s story is strangely romantic, a Romeo-and-Juliet-on-Oxy story that can’t decide where to land on its main character’s worthiness.

The Verdict: Cherry‘s biggest problem — from star to script to directors — is that it feels like it’s trying way too hard. At every step of the journey, you can smell Holland and the Russo’s desperation to escape the creative chains of blockbuster franchise filmmaking and strike out on their own. The problem is, in their zeal to be different, they end up emulating a host of other influences, each more hollowly than the next. Holland’s not quite De Niro yet, and the Russos ape all the stylistic flourishes of Martin Scorsese, but with none of the intent. As is, Cherry feels like Taxi Driver had an affair with Full Metal Jacket, and had a baby raised by Fight Club. There’s a fundamental disconnect between Cherry’s cynicism and Holland’s innate naivete that just makes the whole affair feel wrong somehow, not to mention crushingly long at nearly two and a half hours.

Where’s It Playing? Cherry shows you a close-up of Tom Holland’s jerk-off face, plus some other stuff, on Apple TV+ March 12th.

Tom Holland Is Miscast In the Ambitious, Messy Cherry: Review