The Pitch: Marla Grayson (Rosamund Pike) cares a lot. She’s the legal guardian of dozens of elderly people who desperately need her help. This “care” comes in the form of decision making powers regarding her client’s finances and medical treatment. With a simple doctor’s recommendation and signature from a judge, she essentially has the legal right to decimate the lives and accumulated wealth of anyone who falls into her trap.

But Marla’s newest client, Jennifer Peterson (Dianne Wiest), is more than she seems and may end up causing the conniving entrepreneur’s downfall. Writer/director J Blakeson’s new Netflix film is a black comedy that feels infuriatingly familiar given the rampant authoritarian greed and hypocrisy we see daily. Dressed up as a stylish thriller, I Care a Lot is a brutal indictment of the American healthcare system.

Care Girl: Pike is magnetic as Marla, essentially reprising her notorious turn as Gone Girl’s Cool Girl Amy Dunne. She knows how to play the game and is more than willing to sell out anyone to further her own ambition. Marla sees herself as a lioness in a world of lambs and her ruthless actions reveal someone who’s long since abandoned any moral compass. She’s polished and professional, perfectly cultivating her stylish exterior and compassionate smile. This, combined with a knowledge of the system and some well-placed bribes, allows her to show up on the doorstep of a stranger and calmly explain to them that she’s taking over their life. 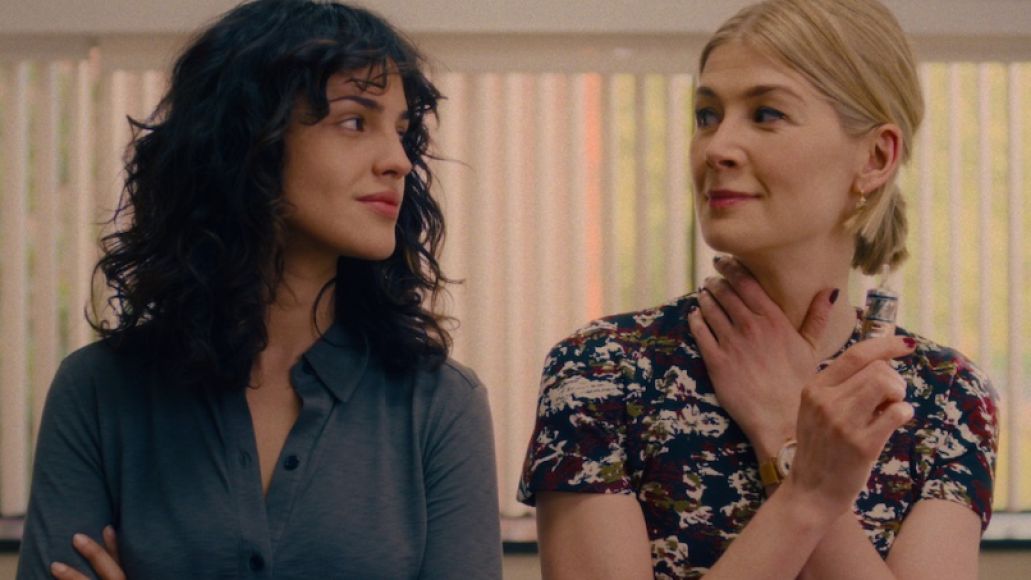 This unflinching exterior is softened by her relationship with partner-in-crime Fran (Eiza González), her assistant and lover. While the bond between the two is genuine, Fran is also just as guilty in her willingness to rip apart the lives of elderly clients. It would be tempting to view the couple as anti-heroes, fighting the good fight on behalf of other women, but Blakeson never lets us forget that, though they may suffer, they do so to increase their own wealth rather than in pursuit of some loftier cause. They wield the catchphrases of feminism as a way to disguise an endless pursuit of power no matter who they have to step on along the way.

Predators and Prey: Weist plays Marla’s troublesome client Jennifer to haunting perfection, shifting deftly from wide-eyed confusion to defiant fearlessness as she warns Marla that victimizing her might be a deadly mistake. We feel Jennifer’s fear as her life is turned upside down by Marla’s games, and we admire her resolve as she refuses to give up her power. Her cackling promise that “he’s coming for you” is both chilling and exciting in its promise that Marla might suffer consequences for her abhorrent actions. Those consequences arrive in the form of Roman Lunyov (Peter Dinklage), Jennifer’s mob connected son who will stop at nothing to protect his believed mother. Dinklage is captivating in the role, his eccentric quirks and calm mannerisms providing a quietly menacing persona punctuated by jarring outburst of rage. 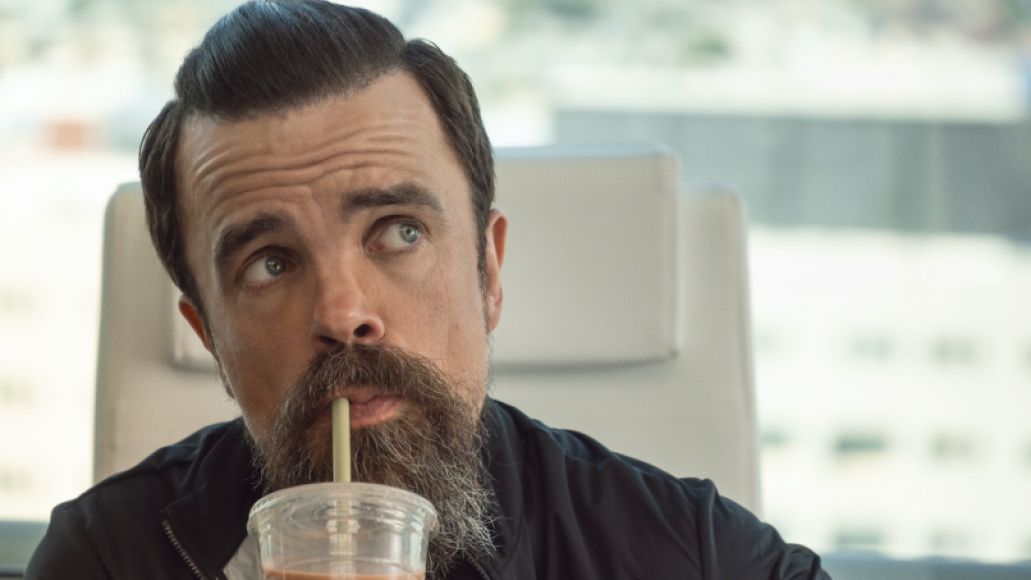 It’s in Roman’s crew where the dark comedy thrives. Nicholas Logan is simultaneously hapless and frightening as Roman’s enforcer Alexi Ignatyev and Chris Messina dazzles in a brief, but memorable role as Roman’s slick lawyer, Dean Ericson. But Marla is supported by her own crew of henchmen. Alicia Witt is infuriating as a doctor willing to sell out her patients for stock shares and Damian Young leans on his devious persona as the manager of an assisted living facility on Marla’s payroll. Though operating within the bounds of the law, they’re arguably more terrifying with their sinister motivations hiding under a compassionate and trustworthy veneer.

A Woman’s Place: Marla’s brand of faux feminism reveals the insidious gender stereotypes that keep women in subservient roles. Caregiving is generally seen as a traditionally female occupation with women making up the majority of “pink-collar” fields like nursing, childcare, and education. Because our capitalist society often disregards women, children, and the elderly, those in power don’t see value in understanding the details of caregiving. Well-meaning Judge Lomax (Isiah Whitlock Jr.) places unquestioning confidence in Marla to act in good faith on behalf of her clients and his lack of interest in the details allows her grift to function in plain sight. 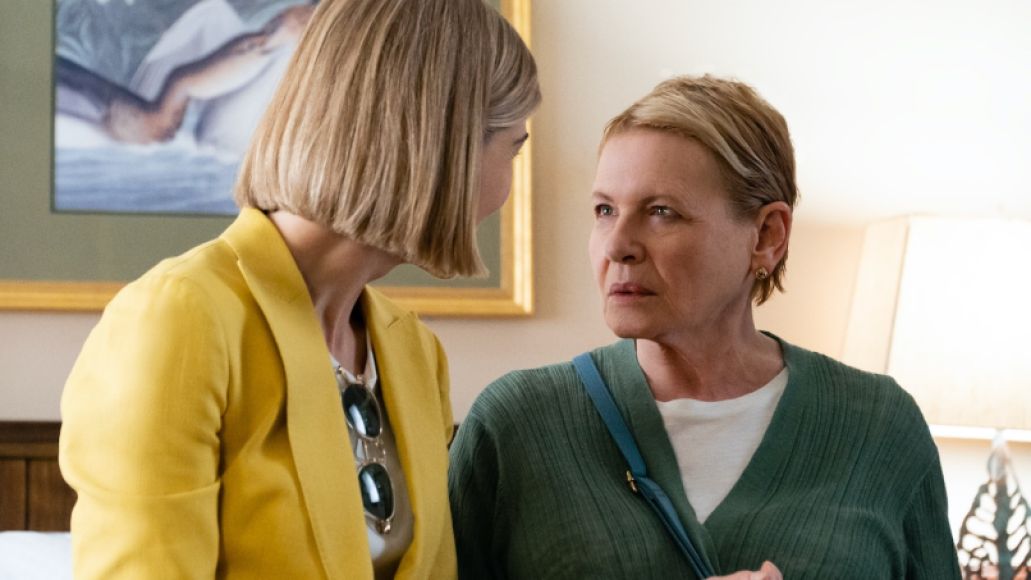 Women are expected to selflessly give of themselves to take care of others and Marla exploits this misogyny to her benefit. She wields these stereotypes as a weapon, painting those who would question her motives as sexist rather than noble. And lest she seem too good to be true, she demands that she be fairly paid for her work, preventing anyone from questioning whether she has a right to the finances of others. Marla refuses to be intimidated by men, spouting feminist jargon as a way of convincing herself that her schemes are noble. And though she occasionally occupies the space of anti-hero, she is most decidedly the villain.

Does Anyone Really Care? While not a horror movie, I Care a Lot is terrifying in its depiction of the ease at which a predatory health care system can victimize unsuspecting people. In the blink of an eye, Jennifer is ripped out of her home, trapped in a facility against her will, and drugged when she tries to complain. Her belongings and home are gone, leaving her with nothing to come back to even if she successfully frees herself from Marla’s clutches.

More insidious is the gaslighting Jennifer endures as everyone around her questions her sanity and ability to make decisions for herself. When those in power have deemed you mentally deficient, any attempt to protest seems like further justification of your instability. It’s the lived experience of millions of Americans who are valued more for their place in the system rather than their humanity. This blatant systemic oppression is cloaked in righteousness and designed to empower those at the top of the food chain. 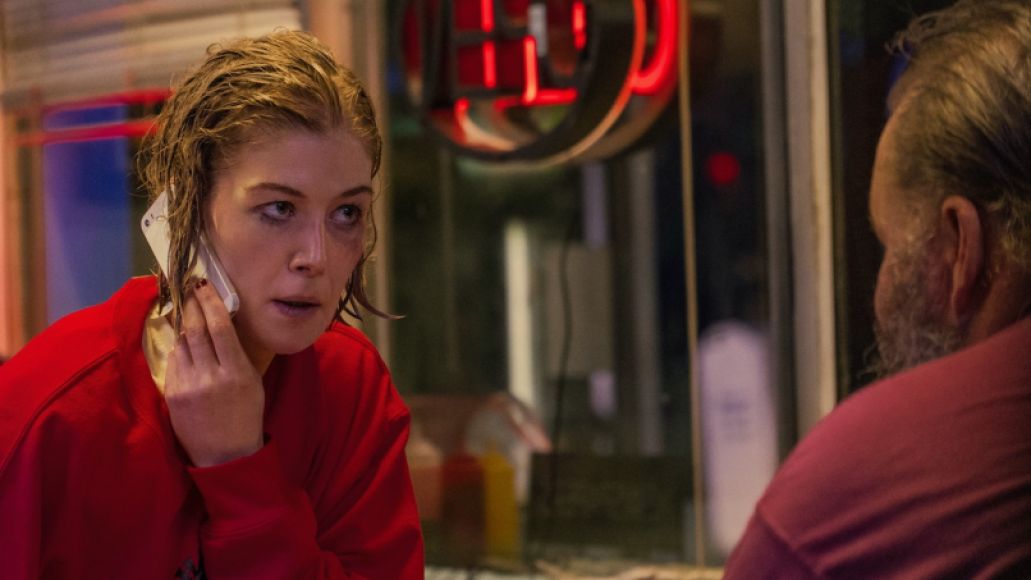 As Marla’s situation becomes ever more dire, she reveals that her true motive is to earn enough money to use it as a weapon against others and here is where the clearest indictment of our current healthcare industry lies. Marla is a function of a system with enough power and money to overwhelm anyone who would challenge her. Medical Insurance companies have unlimited resources at their disposal and many know that most people will not have the time or energy to refute inflated charges or questionable line items on a medical bill.

After all, the system is designed to favor these powerful corporations and to uphold decisions by doctors often at the expense of patients driven to bankruptcy by seemingly endless copays and out of pocket costs. Simply navigating the system is complicated and it often seems easier just to give in, which is exactly what people like Marla are counting on.

What’s Streaming on Netflix in February 2021

The Verdict: While I Care a Lot has a lot to say about capitalism, feminism, and the current political landscape, it’s also a thrilling dark comedy. The pacing is occasionally slow and some plot points admittedly defy logic, but the film effectively channels the collective rage many of us feel after a year of watching systems catastrophically fail those most in need of their protection. It skewers those in power and openly shows the callous behaviors we see playing out in the midst of a global crisis. If anything, Blakeson’s willingness to say the quiet part out loud feels refreshing and honest after years of being asked to ignore what we see with our own eyes. More to that point, the film’s conclusion is both fitting and cathartic in its realistic simplicity, turning what could be read as feminist empowerment into a cautionary tale about the dangers of abandoning our own humanity.

Where’s It Streaming? I Care A Lot is currently available on Netflix.

Netflix's I Care a Lot Is a Brutal Indictment of the American HealthCare System: Review