Editor’s Note: This op-ed originally ran in 2016 for the 20th anniversary of Happy Gilmore. Today, we’ve dusted it off for the 25th anniversary of the Adam Sandler blockbuster. So, grab your clubs, your gold jacket, and meet us in the sand.

Happy Gilmore is basically perfect. Disagree with me? That’s your right, but I’m going to stab you with this skate.

There’s a lot that makes Happy Gilmore, Adam Sandler’s 1996 golf-idiot-savant comedy, so wonderful. Part of it is that it’s almost gleefully simple: failed hockey player discovers that his lousy slap shot could be good for golf and uses his newfound power to save Grandma’s house in a battle of homegrown hero versus rich prick. Part of it is that it’s just funny, made before Sandler started to exhaust his schlumpy charms. But more than anything else, Happy Gilmore endures because it has a perfect goddamn villain. And no, I’m not talking about the alligator.

Shooter McGavin, you son of a bitch. We salute you.

For those who haven’t had the pleasure, Shooter McGavin is the primary antagonist of Happy Gilmore, a hotshot golfer chasing his first jacket whose ride to glory gets bumpy when the angry, messy, and — surprise, surprise — wildly popular Happy gets discovered by a golf legend and crashes the Pro Tour. But Shooter’s not the villain because he’s a good golfer. Shooter’s the villain because he’s a rich, dickish, class warrior. He’s an asshole, plain and simple. No mustache-twisting, no takeover plot, no secret lair. He’s just a guy with an ego who thinks you riff-raff are ruining the noble sport of golf.

Yes, you riff-raff. We are Happy, and Shooter is the goddamn 1%.

Christopher McDonald turned down Happy Gilmore twice. Twice. I had no idea we came so close to almost being robbed of the best comedic movie villain of all time (yeah, I said it). As McDonald told The AV Club in 2001, “I turned it down because I was really tired. I’d just done two movies back-to-back in Vancouver. But they said, ‘They’d really like for you to play this Shooter McGavin guy.’ And I’m, like, ‘Ugh, it’s another bad guy. I don’t wanna do that.’ Yeah, but at least it’s a funny movie. And it did look pretty funny.”

You bet your ass it did, McDonald. The actor described Shooter as being “in on the joke,” but I’m not sure that’s true. The movie’s in on the joke, for sure (“You eat pieces of shit for breakfast?”), but until Shooter starts playing really dirty — hiring a jeering fan (Joe “Jackass!” Flaherty) to throw off Happy’s game, buying his grandma’s house at auction and using it to elbow him off the tour, and then eventually getting the “Jackass!” guy to literally hit him with a car on the golf course — he’s just a guy who sees himself as a defender of the “civilized” world. It’s not just Happy who doesn’t belong in golf. His fans don’t, either, and until Shooter goes after Grandma, that’s the very worst thing about him. Who does Shooter hate? The audience, that’s who.

There’s nothing wrong with appreciating entertainment (or sports) that aren’t especially highbrow. Opera’s not for everyone, after all. That’s not to say there aren’t Sandler fans who like opera (that’s me!) or NASCAR fanatics who love golf. But what makes someone an asshole isn’t what they like or don’t like, but what — and who — they disparage. Shooter’s mean, selfish, egotistical, piggish, and has terrible, terrible insults, but what’s worst about him is that he’s a snob. The people he hates most are the people smudging up his palace of privilege. 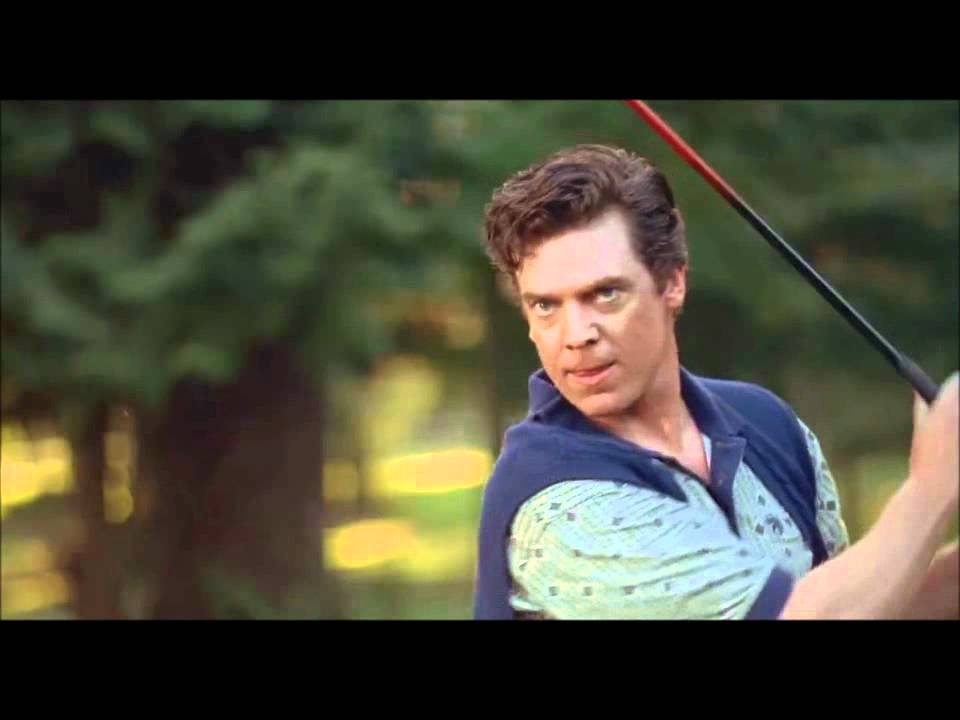 The people Happy attracts to golf are, as he sees them, animals. They’re not where they’re supposed to be. He resents all the non-rich people who aren’t politely golf-clapping through each hole. He hates their signs and their hoots and hollers and their dirty t-shirts, and if he could see through the screen, he’d hate wrinkly pajama pants and extra-large popcorns and Pizza Rolls and that girl (me) who’s drinking Diet Coke right from the two-liter like the savage she is. And because Adam Sandler and co-writer Tim Herlihy know what they’re fucking about, he loses! He loses to the losers, and everyone who’s watching wins.

Rich pricks aren’t an uncommon theme in Sandler’s movies, or in comedy in general — see also: Scrooge McDuck, Ebenezer Scrooge, Eric Gordon (Bradley Whitford’s villain from Billy Madison). But Shooter’s something special because his brand of snobbery is so familiar. He’s a bad guy for anyone who ever unabashedly loved Adam Sandler or Britney Spears or fart jokes or Titanic. He’s a bad guy for a life that just isn’t fucking fair. We love to hate him, and we love, really love, to watch him fucking lose.

Fittingly, Christopher McDonald needed a win to agree to play Shooter at all. “I played a golf tournament in Seattle, and I won,” he said in that 2011 interview. And I thought, “You know, it would be fun to do that golf movie, maybe.”

Now, he says, he always golfs for free. He’ll golf for free forever. That’s always how it fucking goes — except in Happy Gilmore. Thanks, Shooter. We eat pieces of shit like you for breakfast.