Singer, songwriter, and guitarist Emily Wolfe has been rising up the music ranks over the past few years, and now she has her own signature Epiphone Sheraton Stealth guitar. She puts the instrument on display in a new performance of her song “No Man” at the Gibson Showroom in Austin, Texas, exclusively premiering at Consequence of Sound along with a giveaway contest for the new guitar.

As an up-and-coming musician, Wolfe makes history with her own signature Epiphone guitar, which she helped develop. The Sheraton Stealth offers thinline, double-cutaway, semi-hollowbody design similar to the Gibson ES-335.

Wolfe’s model comes in a Black Aged Gloss finish, boasting an Indian Laurel fingerboard with 22 medium jumbo frets and mother-of-pearl block inlays with abalone lightning bolts. The headstock is designed in the ’60s Kalamazoo shape with Emily’s logo, a mother of pearl tree of life. And it contains Epiphone Alnico Classic PRO humbucker pickups, among other features.

As mentioned, Wolfe plays her Epiphone Sheraton Stealth in a new performance video, featuring the singer-guitarist and her band rocking her bluesy track “No Man”.

Regarding the song, Wolfe states, “‘No Man’ is a song about independence. I wrote it out of passion and rage, and for every person who has ever felt stifled in their endeavors.”

She adds, “‘No Man’ is a song about the emotion that comes with seeing your place in the world, but knowing you’re going to break the mold one day.”

Wolfe will release a new album in summer 2021, and “No Man” is one of the songs that will be included on the LP.

On her early days learning guitar and getting into music

I gravitated toward the guitar naturally. My mom took my sister and I to a thrift store when I was 5 years old. I remember looking down an aisle and seeing a kid-size acoustic guitar. I begged my mom for that guitar, and she got it for me. I just knew it was what I wanted to spend my life doing from the first time I saw one. I know it sounds like a big thing for a 5-year-old to realize, but it’s something I’ve always felt. It’s in my blood. That was the beginning of my journey with music. I had one lesson, and the teacher said I wasn’t very good at guitar. He told me to learn drums because it was easier. After that first lesson, I realized that I don’t want to be judged by someone for not being as good at guitar as I think I can be. So, I quit lessons and I basically just taught myself from then on out. I started writing songs when I was about 15. The songs became better over the years and at this point I’m really proud of my songs. I’m proud to show them to people now. It’s been a lifelong journey of growth.

On which Epiphone and Gibson artists inspired her to play, and who still inspires her today

B.B. King was the main inspiration for me. I just love watching his videos and love hearing the way he plays. Every note is intentional, every note says something. Slash was always so dope and inspiring to me. I love how aggressive his playing is, but he doesn’t show it. When you watch him play, it doesn’t look like he’s trying to be aggressive, but it is so intense and iconic. Some of the riffs that are on his records are just classic. That’s where I got some of my desire to make classic riffs. Billy Gibbons is a huge one. I love his tone and approach to guitar. His use of pinch harmonics is really cool. It taught me that you can take something from a genre based in metal and bring it to blues and pop. ZZ Top is such a genre crossing band. 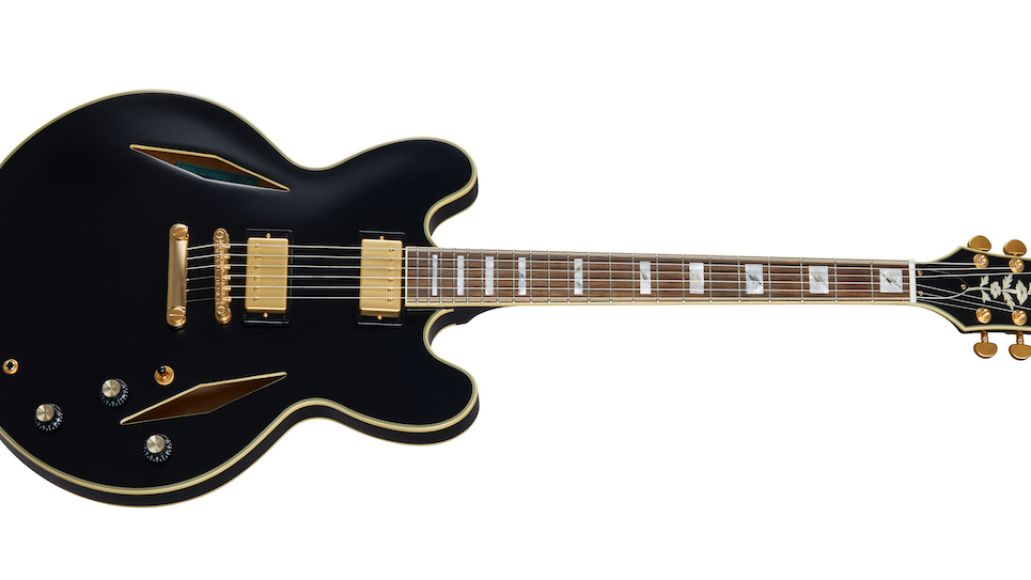 On her personal history with Gibson and Epiphone guitars, and her relationship with the brands

My relationship with Gibson and Epiphone started as a family thing. Anytime we would watch the Grammys as a family, or music videos as a family, my mom would always see Gibsons on the screen and say, “That’s a Gibson, that’s top of the line.” So, I grew up with this notion that Gibson is the best of the best. That’s really the only guitar that I’ve been drawn to because if you’re going to get a guitar, why not get the best? When I was in college, I was looking to buy my first electric guitar. I walked into a music shop and when straight to the Gibsons. I noticed the price was out of my price range as a college student. I ended up getting an Epiphone Sheraton because it looked exactly like Lucille and I’ve always been a B.B. King fan and any time I saw a guitar that looked like Lucille, I was drawn to it. So that’s why I got the Sheraton, and it was in my budget. Ever since then, it’s been my thing. It’s the guitar that’s part of me as a person and it’s been with me in my musical journey since I started doing this professionally. That’s when my relationship started with the brand.

As far as a personal relationship with Gibson and Epiphone, a mutual friend introduced me to my amazing Gibson rep Codey Allen. She is one of the few people who was supportive and rebellious enough to take a chance on an unknown artist at the time when we met. She has been such a huge part of my career. So, through the six years that we’ve known each other, we have grown our friendship and relationship to the point where now there is a signature guitar coming out, and I feel like it is just as much hers as it is mine.

The story behind the Stealth starts at a Gibson event. Codey flew me and my band out to California to play with other Gibson artists like Billy Gibbons, Peter Frampton, Nancy Wilson, Black Pistol Fire and Robby Krieger. At the time I was still getting started, and unknown to a lot of the Gibson people. I performed, and it must have really resonated with them because at the end of the show, the executives of Gibson and Epiphone swarmed me and offered a signature guitar deal on the spot. That was an incredible moment. I felt like my career was about to take a turn for the better. And it has. It feels amazing to have a signature instrument out. It almost feels like I can give the kid who doesn’t have friends and wants to play guitar to cope an instrument of their own and be connected to people in that way. My name is on the back of the headstock in black gloss over the black satin finish. You can only see it when you’re looking for it, and that was by design. That’s why we named it the Stealth. When someone picks this guitar up, I want it to feel like theirs.

On what’s unique about her Epiphone Sheraton Stealth guitar

My new Sheraton is hands-down my favorite guitar I’ve ever played. There are so many unique features about this guitar, but the most prominent ones are the finish, and its diamond F holes. It’s got an amazing amount of sustain and the thinner finish allows it to resonate more than other guitars. It somehow feels like a vintage, worn-in instrument right out of the box.

The black aged gloss is the first finish of its kind with Epiphone. I’ve always loved black guitars but have been drawn to matte finishes. The designers over at Epiphone had the killer idea to bring a more satin finish to the body, neck and headstock. It’s very quick and easy to play.

On what things are like in Austin right now, as far as the music scene

Just like every other city at the moment, live music venues are struggling, and musicians are having to find other ways to perform for people. Things are starting to come back however, which gives me a lot of hope. There are some venues in town that have figured out safe and fun ways to put on live shows. For instance, Empire Garage and Haute Spot are two of the main venues that have been putting on socially distant events and they’ve all turned out great and given people here in Austin a sense of normalcy. I’ve maintained my sanity by rehearsing with my band to make sure we stay tight for when touring comes back, writing new music, and spending time with my family.

On how ideas come to her when she’s writing songs

Most of the time it’s random when ideas come to me, but I notice that when I’m isolated, they tend to come the most. Either in my car alone, in the shower, or on walks.

On when we can expect more new music from her

New music will be out this year. I’m very excited to release a new full-length record and stoked about the direction of the songs. I would say to expect a new sound from this record. The producer is in a very prominent rock band, and we worked really well together on giving 10 new rock songs some pop flare.

I’ve been dying to get back on the road. I miss being in a different city every night. I can’t wait to play Baltimore again. Baltimore, Philly, and NYC are a few of my favorite places to play. To any fans out there I want to say I miss seeing you and can’t wait to experience live music again with you soon.