The Pitch: The king has returned! Eddie Murphy is back to check in on his 1988 invention Akeem, the now-ruler of the fictional African nation of Zamunda. As established in Coming to America, Zamunda is both a lavish and antiquated locale: not a lot of TVs, multitudes of rituals and ceremonies, beautiful interior design that would make a real estate mogul blush, all affectionately anachronistic.

Akeem’s content with his three daughters and his loving queen Lisa (Shari Headley) by his side. Yet for the sake of kick-starting a sequel, he needs a male heir to avoid war with General Izzi (Wesley Snipes), leader of Nextdoria (you come up with a better fake name). And as it just so happens, Akeem hooked with up a woman named Mary (Leslie Jones) in the ‘80s, and unknown to Akeem, Mary raised his son Lavelle (Jermaine Fowler) in New York.

This is where the premise pulls a 180: Akeem’s done America already. He came, he saw, he worked at McDowell’s. Instead, the sequel has Akeem picking up his long-lost son to groom him and introduce him to Zamunda in all its quirk and fervor. Lavelle is now the fish out of water learning the family business, like pulling lion whiskers and washing of royal genitals. In other words, whereas the original film is a comedy of exploration, this is one of reclamation.

So. Technically this would be Coming to Zamunda, no? 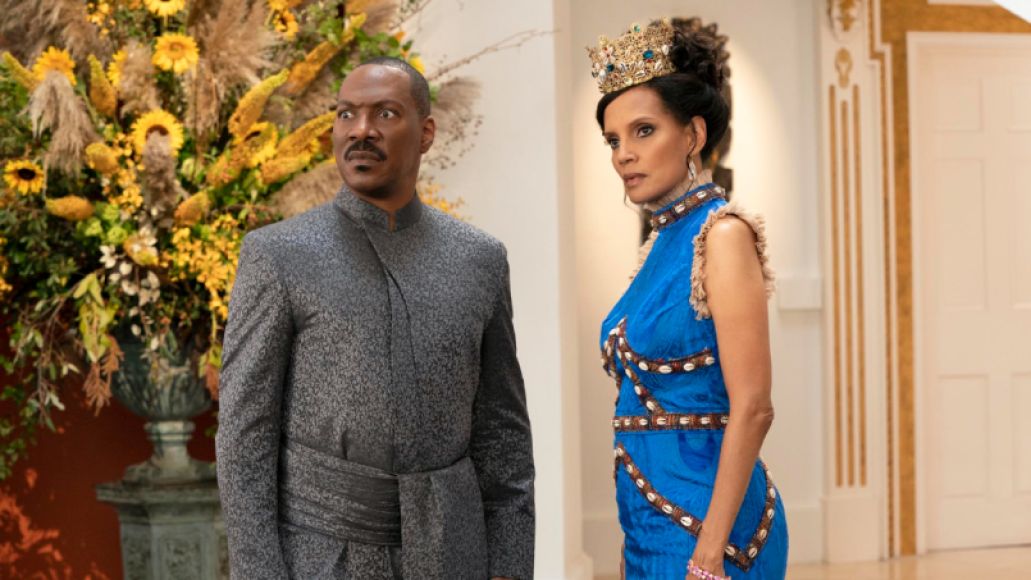 Not 2 Bad: Murphy’s no stranger to sequels. Regrettably lesser sequels, to be frank. The Beverly Hills Cops after 1984, Doctor Dolittle 2, the back half of the Shrek franchise, and yes, the Klumps. When asking “why now?” of Coming 2 America, the obvious answer was always going to be Murphy’s continued marketability. Also, Coming to America is either a cult classic or outright masterpiece, depending on who you ask.

What Coming 2 America lacks in the original’s naughty deadpan (and R-rated surrealism), it makes up for with vibes of a raucous family party. But this show takes a second. Actually, about 20 minutes of rushing to set up the who and why. There are abrupt name-driven intros of old characters, Murphy smiling and mingling, cameos, callbacks, all invoking that desperate sequel feeling. Gladys Knight singing “Midnight Train to Zamunda”? Okay, that initially felt corny, but it feels funnier in hindsight? 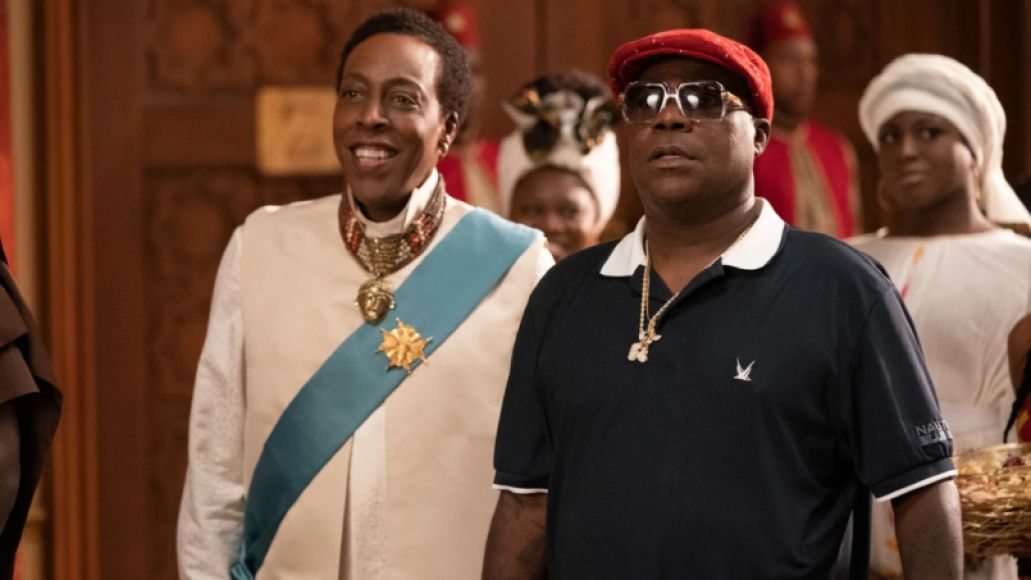 Once things settle, though, this is a Meet the Parents-type comedy through and through. Murphy bonding with his newfound son is part comedy of manners, part parents just don’t understand. For reference, if Happiest Season felt a little strangulating, Coming 2 America offers actual relaxation. The humor’s secret weapons are the chummy personalities and a curious sense of heart that the original wasn’t all that interested in, and those qualities are valuable in a family comedy.

Fowler’s big-timer confidence and dollar signs in his eyes are winning. Murphy shit-talking Arsenio Hall or Snipes – not unlike their rapport in Dolemite is My Name for the latter – trades on the pleasure of watching old pals not care if they look ridiculous around each other. Leslie Jones and Tracy Morgan, as Lavelle’s mom and uncle, feel like they can’t believe they were invited. Everybody involved looks like they’re on vacation. No, not in the Sandler side-comedy way, but like they’re happy being in this place and goofing around with one another. Throw in Ruth Carter’s (Black Panther) technicolor costumes, needle-drops from African artists, and an upbeat pace, the all-around feel is that of a hangout. 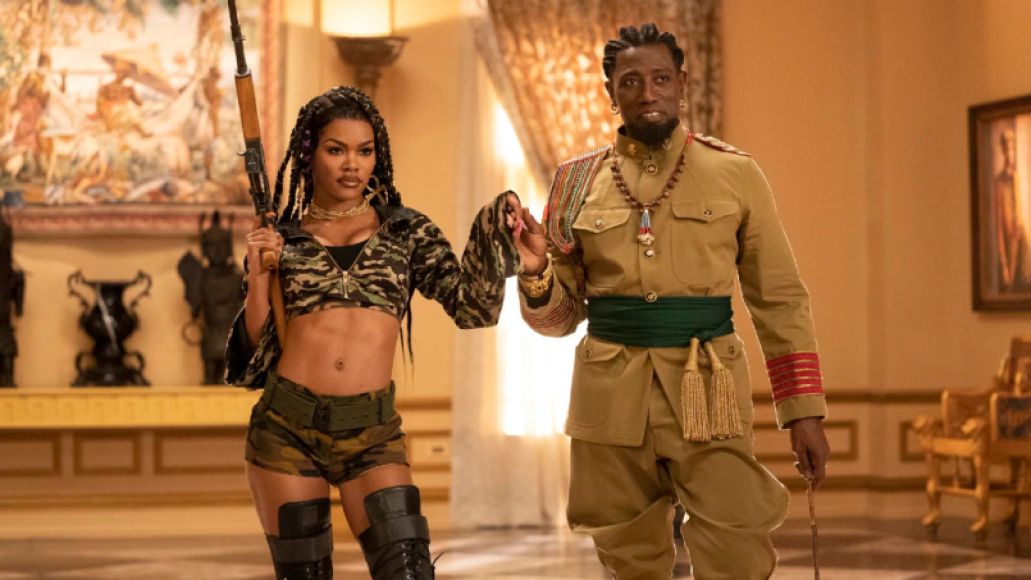 What Do You Know From Funny, Ya Bastard?The jokes deal in cultural references and wordplay, all attitude-driven. Izzi is proclaimed to be the inspiration for Scar in Lion King. Upon hearing about his son, Akeem proclaims “I will find the bastard of Queens!” Just goofy shit. And to the film’s credit — and this is huge for a comedy lega-sequel – it’s not annoying.

To the comedy’s tone, it should be noted that this isn’t a John Landis film, for better and maybe worse. No jokes aim as big and broad as Landis would have; that was his thing. He’d commit to asides, farce, and dirty jokes. Landis also had a propensity for needless nudity, dry storytelling, and getting uncomfortably close to racism. Coming 2 America, under Craig Brewer (Hustle & Flow), has a lighter, swifter hand. He venerates and references the original with love, but his sense of humor is a little dorkier.

To be clear, the writers of the original, Barry Blaustein and David Sheffield, are back, and TV whiz Kenya Barris (Blackish) throws in as well. But Brewer would rather be a crowd-pleaser than force too much risque humor (an okay thing, and there’s still dirty bits for those in need!). Landis liked long takes on pained faces for comic reactions. Brewer digs musical numbers and chases with wild cats. Whereas Landis would shoot for a trans panic joke (remember Hall in drag in the first?), Brewer runs with timely dunks on white privilege using Colin Jost in a bit part as a hiring manager.

So, come to think of it, it’s all just different shades of the same broad comedy.

Verdict: For a 33 years-late follow up to a fan favorite? This isn’t terrible, not even close. Will it split the royal underlings that vaunt Landis’s ’88 effort? Maybe. For now, Coming 2 America deserves to be enjoyed as one of Murphy’s better follow-ups. So, why now? Perhaps it’s “why not”?

Where’s It Streaming? Head to Zamunda on March 5th via Amazon Prime.

Coming 2 America Is Not 2 Bad: Review