The Pitch: Hutch Mansell’s the name, and accounting is his game. Bob Odenkirk is Mansell, a five o’clock shadow of a human being, working in a warehouse as the back-office calculator. He drones day in and day out, running the numbers for louder and more macho men. His son hates him. His wife sleeps with a pillow between them. His life is the very model of suburban repression and depression, but beneath the pale exterior lies a sleeping giant. Prior to accountancy, Hutch was a homicidal “accountant” for “all the places with acronym names”, as he puts it. He was once a veritable James Bond, with an affinity for swift completions and anonymity. Now, no more. It’s all Restoration Hardware décor and vinyl collections for lame old Hutch.

But where most men spend their midlife crises on cars, boats, and other loud toys, Hutch just … goes apeshit. After a home invasion, he relapses, going on a vengeful killing spree that would make Schwarzenegger ask “you good, dude?” Hutch, in a sick twist of fate, manages to piss off Russian gangsters, and well, you know how these things go. Survivable gunshots to the shoulder, knives in the love handles. A sickeningly uneven ratio of confirmed kills from Hutch versus a downpour of bullets that keep missing him by a hair. Hutch is back, baby. Everyone lay low till he cools off a little.

Nobody But He: It’s like Odenkirk saw what Liam Neeson, Denzel Washington, and Keanu Reeves have been doing in recent years, and said, “Whatever they’re getting paid, I want some too.” Written (or copy-pasted) by John Wick’s Derek Kolstad, and directed by Hardcore Henry’s Ilya Naishuller, Nobody is as under-distinguished as its name. Another entry for the “Man of a certain age goes off for like, justice, or something” subgenre, Nobody at least has the courtesy to get in and out quickly. It’s full of skittish camerawork, hot music cues, and a star with the look and feel of a guy with something to prove (interpret that freely, openly, and nervously as you like). 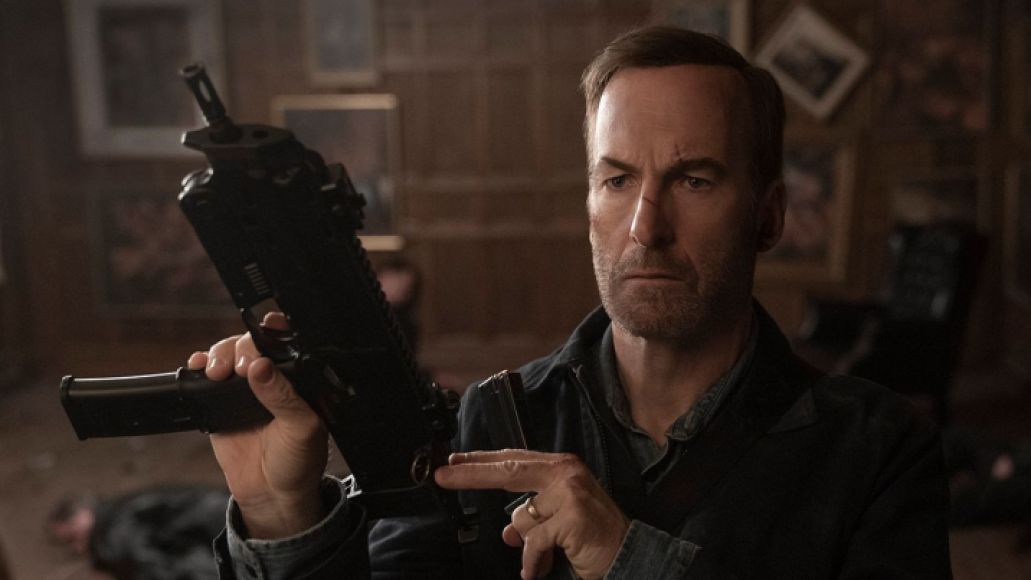 Bob’s a killer, but Nobody is filler. Liberally borrowing beats from the first Wick (home fights, deep-state killing programs, protean leads going crazy, Euro villainy, winking humor), Nobody is made of so much also-ran action stuff that it’s hard to root for yet another one of these, no matter how competent. Even if it’s a slick, sleek kill-a-thon. Odenkirk works the sad-sack concept well enough that when he goes full revenge spree, it lands as darkly comic. They called this “going postal” in the ‘90s, right? The twerp in accounting who everyone thought was so nice and quiet is a trained killer? At least he’s good at it and looks cool doing it? Which, gulp? That is Nobody, and nothing more.

Mr. Show-Off: Bob’s producing, and he’s recently shown up in a stack of behind-the-scenes videos about getting in shape for this movie. In them, he repeatedly breaks out the same semi-joke about being a comedy writer for 25 years and never working out. (This is a guy that once lamented growing mold in his mouth from the stress of running Mr. Show. Using a studio action flick to land a personal trainer is not the worst front in the world.) Scratch a tad deeper? Perhaps, at 58 years old, Bob’s a little tired of being the butt of the joke, or a comedy bro’s trivia response. He’s well aware that you’re aware that he once wrote “Matt Foley, Motivational Speaker”. Watch him wither and die in a Michael Rosenbaum podcast interview last year, being asked yet again about “just where did Foley come from, man, you’re so crazy”. There’s ample evidence that Odenkirk possesses a smirking weariness that suits him well, and that he can act: The Post, Better Call Saul, and other works suggest it. So Nobody isn’t too great a stretch, and he is decent.

He’s also just a stand-in for stunts and frustrated men looking to lash out everywhere, and that’s what makes Nobody uncomfortable after a point. Bear in mind, the film – no spoilers – is predicated on Hutch looking for action by any means necessary. He’s every man who feels so henpecked that he just wants to go to a bar and smash a bottle just to feel something. For some, this recklessness should satisfy, but for others, it’s eerily too-real for a perceived escapism. And that’s the creepy thing that belies the cool chases, stand-offs, and monologues about being unable to settle. Deep down, this is a film about a scary guy having yes, a “bad day,” and when the nervous laughs fade, we’re left with what amounts to a sorta cutesier Steven Seagal film.

The Verdict: Nobody offers more than enough gunplay and ass-kicking to satisfy grindhouse nuts. It also has plenty of pent-up rage and white male manslaughter to make others wince. In its purest form? Nobody is the premier Dad Film of 2021.

Where’s It Playing? Nobody opens theatrically, where available, on March 26th.

Nobody Is the Premier Dad Film of 2021: Review