The Pitch: Six years after sinister creatures called The Druun turned nearly everyone in Kumandra to stone and the terrain a barren wasteland, Raya (Kelly Marie Tran), the princess of Kumandra’s Heart Land, embarks on a quest to restore her world. To do so, she must find the last known dragon named Sisu (Awkwafina), and reunite the broken pieces of a gem that contain incredible power. She’s not alone: Namaari (Gemma Chan), the young princess of neighboring province Fang Land, also seeks the pieces of the gem for her province’s own selfish purposes. With a ragtag group that includes Tong (Benedict Wong), Boun (Izaac Wang), and Tuk Tuk the pillbug (Alan Tudyk), Raya races to restore Kumandra through the power of the dragons and their gem.

Searching For a Hidden Gem: Disney’s follow-up to Soul and the first original princess movie since 2016’s Moana, Raya and the Last Dragon had the unenviable role of carving a place for itself among an already-prestigious canon of beloved princess films and tear-jerking animated originals. Although it certainly has the right building blocks in place to make for another strong entry for Disney, there’s never a moment where Raya and the Last Dragon truly clicks, or finds its own sense of self. Instead of forging its own unique path and giving audiences a story they haven’t seen before, the film is more of the same — elements plucked from other (better) Disney films and cobbled together to form an action-adventure flick with enough charm to win over younger audiences, but nowhere near enough originality or fire to satisfy older audiences.

Despite its heavy emphasis on building the lore and world of Kumandra (the film’s entire first half hour is glorified narration and backstory to set up the rest of the action), Raya and The Last Dargon is remarkably lacking in originality, opting instead to lift quite a few of its story beats from Moana — from the seafaring journey to restore a gemstone, to the animal sidekick voiced by Tudyk to the burly lackey with a heart of gold. Except, where Moana’s relatively predictable and straightforward structure worked in service of character beats, Raya and the Last Dragon’s over-abundance of characters yet lack of actual development leaves the narrative feeling hollow and uninteresting and desperately starved for urgency. 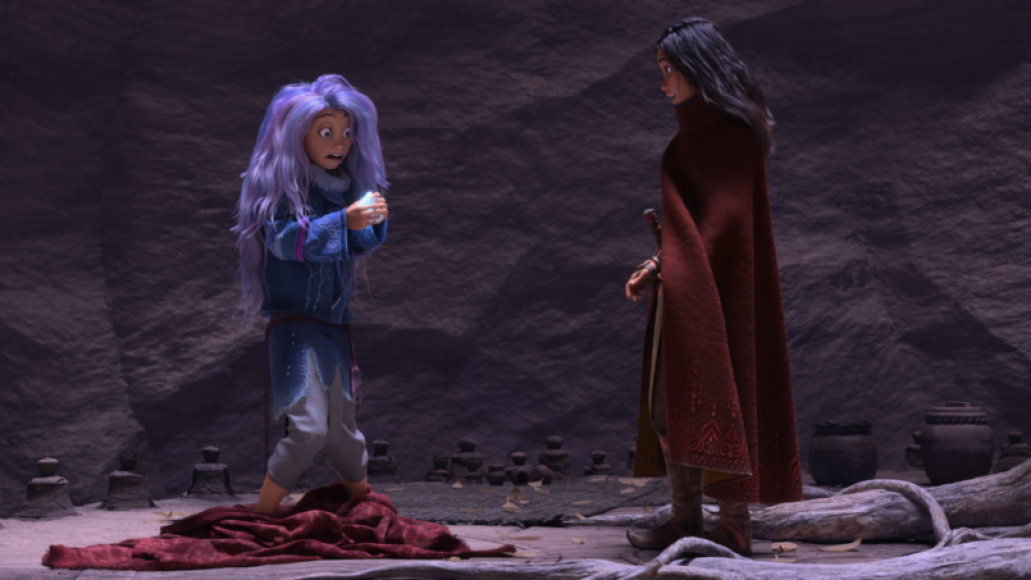 A Middling Princess: Typically, when it comes to a Disney animated film, the sins of a lackluster plot can often be forgiven when supplemented with dazzling characters or quippy dialogue. Films like Tangled and Aladdin aren’t particularly complicated, but the beloved characters elevate the by-the-numbers story. When it comes to Raya and the Last Dragon, though, the film is severely bereft of vitality and wit from any of its characters, and there’s certainly enough of them to chose from. Admittedly, it’s an astoundingly stacked cast with Tran and Awkwafina leading the way, but despite a cast full of megawatt starpower, there are remarkably few memorable characters. In fact, even the ones who make an impression are without much depth.

At the center of it, of course, is Raya, who’s (predictably) the most fleshed-out of the bunch, although that’s not saying much. The film mistakes backstory and world-building for character development, opting to show us Raya’s childhood trauma and then reminding us about it by having other characters mention her lack of trust in others every 10 minutes when the action subsides. Though she’s got spunk and attitude in spades (played with commendable charisma by Tran, who elevates her relatively lackluster material), it’s difficult to get a gauge of Raya’s true personality — who she is, what she stands for, what she cares about — when she’s constantly on the move, explaining plot intricacies to the audience, and collecting pieces of a broken gem. 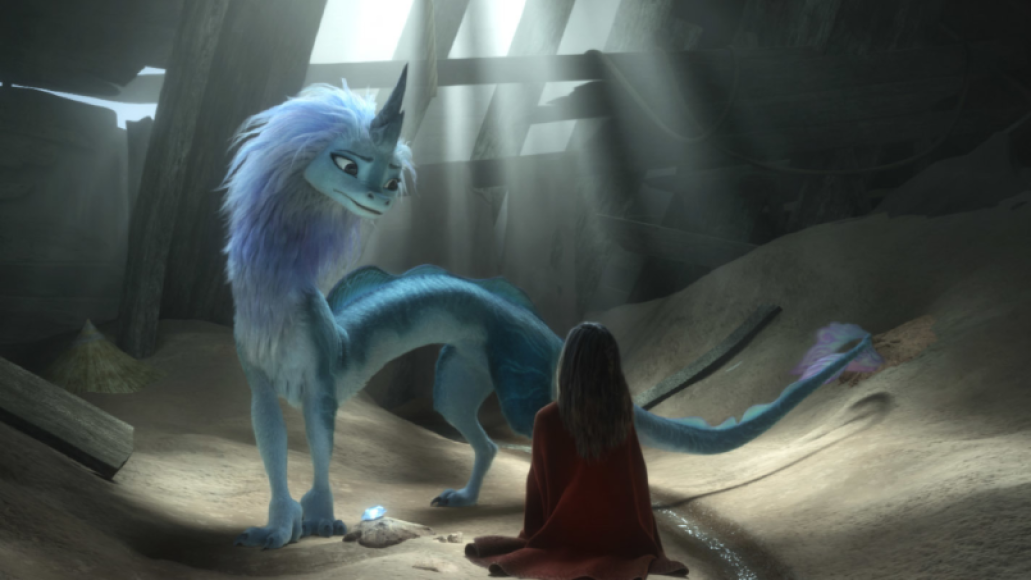 As for the rest of the cast, it’s a tricky thing. Though dragoness Sisu is without a doubt the secondary protagonist, the film also devotes a sizable chunk of time to Chan’s fierce princess Namaari. In the first half hour, it seems as if Raya and the Last Dragon is setting up a central rivalry/relationship at its core between Raya and Namaari, but the latter is a remarkably flat character, and disappears for long enough chunks at a time that it’s easy to forget about her. When the duo finally do clash in the film’s climax, what should feel like an epic, viscous, anticipated battle comes across like another brawl.

Out of all the adorable, easily-merchandisable characters, Awkwafina’s quirky, rainbow-haired dragon Sisu steals the show by a significant margin. Come to think of it, she’s written stronger than even Raya herself. 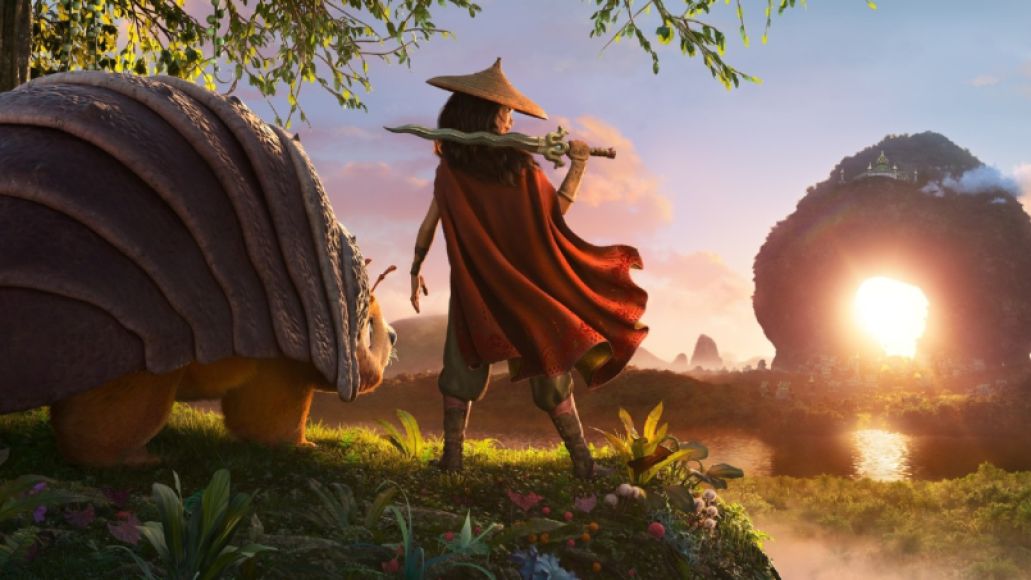 Beautiful, If Nothing Else: Having said that, the film is so aesthetically stunning that it’s difficult to write off altogether. With intricate settings and character designs derived from Southeast Asian mythology and culture (though the film’s casting and handling of those elements outside of aesthetic qualities pose significant questions), the film is beautifully animated and rendered. It plays cleverly with animation in some memorable moments a-la Into the Spider-Verse. James Newton Howard’s charmingly discordant score is another incredibly memorable element, too, combining traditional Southeast Asian music with synth-techno music, making for some truly great soundtracks to many of the film’s cleverly-choreographed fight scenes.

What’s Streaming on Disney+ in March 2021

The Verdict: Though Raya and the Last Dragon is a visual and audible spectacle anchored by an all-star cast, the film’s lack of originality and paper-thin characters leave it on the less memorable end of Disney animated films.

Where’s It Playing? Hop on your nearest shrimping restaurant/barge and set sail on March 5th to see Raya and the Last Dragon in theaters or streaming on Disney+.

Raya and the Last Dragon Is a Hollow Disney Spectacle: Review