KISS singer-bassist Gene Simmons is not only a Rock & Roll Hall of Fame musician, but a merchandizing master. His band set the template for rock branding, and now he’s combining his knowledge of music and merch with a new line of Gibson guitars and basses, dubbed G² (pronounced “G-squared”).

The G² collection sees Simmons partnering with Gibson on a new line of right-handed and left-handed guitars and basses, spanning across the company’s owned and operated brands Gibson, Epiphone, and Kramer. The partnership will launch with the G² Thunderbird bass, which Simmons debuted during KISS’ massive New Year’s Eve livestream show in Dubai. Also on tap are Flying V basses and guitars, among other instruments.

We had the opportunity to speak with Simmons about the collection, the genesis of the partnership, and the instruments themselves. While talking about the new line, Gene also reminisced about the first guitar he ever owned.

As far as KISS, the band had continued its massive “End of the Road” farewell tour at the beginning of 2020, nearly completing another North American leg before the pandemic put a halt to the momentous trek. Simmons discussed the eventual resumption of the tour, as well as what he expects once the touring industry opens up again. And as he explains, just because KISS will be retiring from the road, it doesn’t mean the end of the band.

Read our interview with Gene Simmons below, and learn more about the upcoming G² collection here.

On partnering with Gibson for his new G² collection

Everything began with Cesar [Gueikian], who’s the new [Chief Marketing Officer] of Gibson, who out of the blue gave me a call. I’m blessed to have lots of other irons in the fire, including a full menu with KISS, movies and TV, documentaries, and new toys and games. It’s a KISS world, and you’re just living in it. KISS continues to be bigger and badder than ever before, and we have other businesses on the side, and I don’t want to bore you with the details because it winds up always sounded like “me, me, me.” In fact, I wrote a book called Me, Inc. [laughs].

So, it was Cesar who kind of said, “Look, I’m a music fan. I played guitar. I’ve always loved Gibson. And I know you have a history with Gibson. We’d like to rekindle that relationship.” I said, “Oh, what do you have in mind. I’m not really looking for a full page ad in Bass Magazine. If I was 20, maybe, but I’m long in the tooth and have been doing this a long time and I don’t want to be in pages alongside bands and guys I’ve never heard of before. By the way, I’m all for these new guys. It’s a nice ego boost, but the rest of us have no idea who they are. So, if you want to do something big, let’s do a co-venture, which is cool.” The name wasn’t even my idea. It was Cesar who said, “I want to call it G² [‘G-squared]’.” And I go, “How cool is that? Gibson and Gene, G-squared, G to the power of two.”

And the relationship I have with him is straight on. I send him an email, he answers right back. He calls me, I call him back. That’s what you want. You don’t want, “Call my secretary and I’ll have my secretary call your secretary.” No, you don’t want that relationship with anybody. I won’t stand for those automatic [emails]: “I’m on vacation. Please call my assistant next door.” F**k that!. Take out your own garbage and wipe your own ass, and be a grown-up. And Cesar’s a grown-up and is also a big fan. And that’s what makes me a fan of Cesar.

On what to expect from the Thunderbird and other G² models

The G² line was my shared point of view with Cesar about not bastardizing the [Gibson] legacy. That’s worked for many decades, maybe 100 years. Having said that, we both agreed that there’s room for improvement. So one of the first things we talked about is, because invariably people are going to first look at the instruments, they’ve got to be just gorgeous. The detail is worth stepping up a bit. The quality of the wood has gone up. It’s far more expensive, better wood, more expense. We’ve taken a look at the relationship, mathematically speaking, between the bridge and the neck. You want to just the right distance so that the pickups do their job.

The other thing is the paint and how it connects to the wood and all that — that’s been improved. So in essence, the thing Cesar and I are hoping that you’ll be able to plug in that beautiful instrument and the very first impression you’re going to get is like a good kick in the nuts. Now, there’s going to be the Thunderbird versions that’ll come in a few different colors. One is a kind of a blood red. I don’t mean red, like a lipstick red, but kind of a darker red on the pick guard and some other detail. And there’s a kind of a black and white model with a white outline trim, and a lot of care has been taken so it doesn’t look like somebody just took a paint brush and painted a white trim around it. There are going to be various models. For instance, we’re going to make sure the left-handed version is going to be available because people who play left-handed are often underserved. We’re going to have guitar versions as well as the bass version.

There are various models that are coming up and I don’t really want to go through all the details because at the end of the day, first impressions last and the very first impression I had of actually holding that Thunderbird in my hand was in Dubai for KISS’ New Year’s Eve show. And I have to tell you, it felt great. The relationship between the different notes just felt comfortable, like butter, just felt great in my hands because an instrument, besides sounding good, looking good and all that stuff, has to be something that feels good in your hands. Race-car drivers will tell you when they get into a race car, if it handles well, and it feels good in your hands. … And I played the very first one live in front of what I’m told is a few hundred million people.

The G² Thunderbird Bass in Black and in Red: 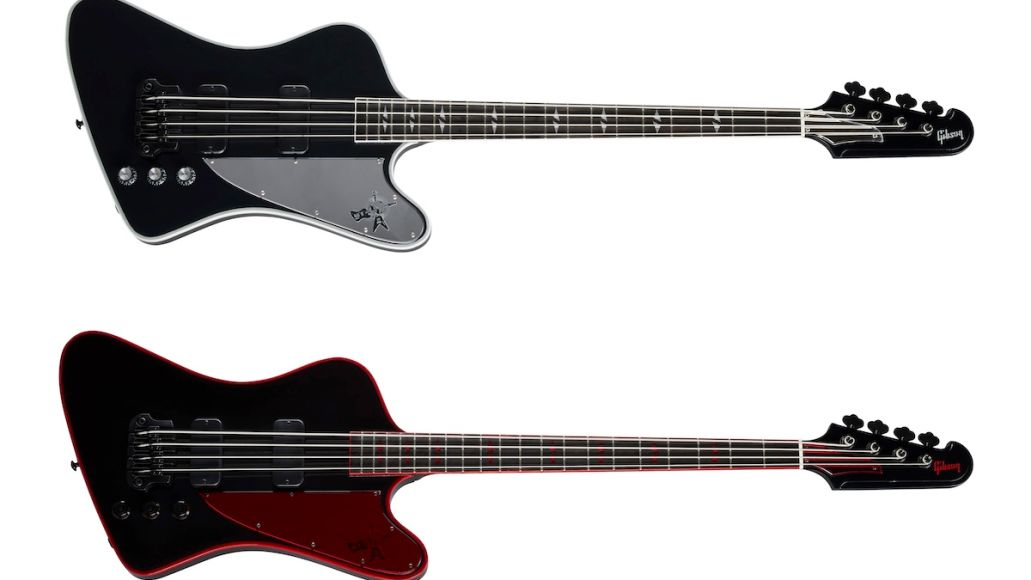 On the first guitar he ever owned

When I first started fiddling around, I fiddled around on guitar. [Paul] McCartney started on guitar and then switched to bass, and so on. There are a number of bass players who started off on guitar. And the very first guitar that I actually owned was actually a Gibson SG Standard, similar to Angus Young’s guitar. And I must have been 14 years old. So my fingers used to hurt because I just didn’t have the calluses built up and all that stuff. But I remember, even with smaller hands, it was just easier to play. And the acoustic guitar I had was cumbersome — the frets were far apart and all that stuff. It was difficult to play. The Standard was fine. It just worked really well. And I remember when chicks would come over and I ‘d say, “Look at this, I can play a C and a G,” they’d marvel. They’d keep looking at the instrument because it was beautiful. That’s what I remember.

People are going to be ravenous for just life. They’re gonna be running out, once it’s safe, to restaurants and clubs go to see concerts and sporting events, because life is out there. Movies aren’t going to go away either. You’re going to want to go to the movies and hold your girl’s hand or your hand in the dark, and have that social experience with other people. Staying at home and watching Netflix is fine. I do it all the time. But … watching it alone, and you turn to your left and go, ‘How cool was that?” And there’s nobody there to share the experience. We’re social animals.

We intend on upping the game. This is going to be our last go around. We’re going to do another hundred cities or so around the world when it’s safe and then we’re getting off the stage. KISS will continue but not onstage.

KISS’ Gene Simmons Recalls Alex Trebek Putting on the Demon Makeup: “He Was a Funny Guy”

On Rob Halford saying the best piece of advice he got was from Simmons, who told him, “It doesn’t matter what they say about you, as long as they’ve got your picture and they spell your name right”

Well, the only way I could ever explain it is not everybody likes Jesus, either. You’re never going to please everybody. You may as well sit back and enjoy it. We’re very lucky, Rob, me, everybody else. We get to get up onstage. We don’t have to dig ditches for a living. You don’t have to do what anybody else tells you. I don’t know if that’s a blessing, but it sure comes close to it. We have the best life on the planet. Enjoy it. There are always going to be people who won’t like you. That’s cool. How’s your life? I’m happy. 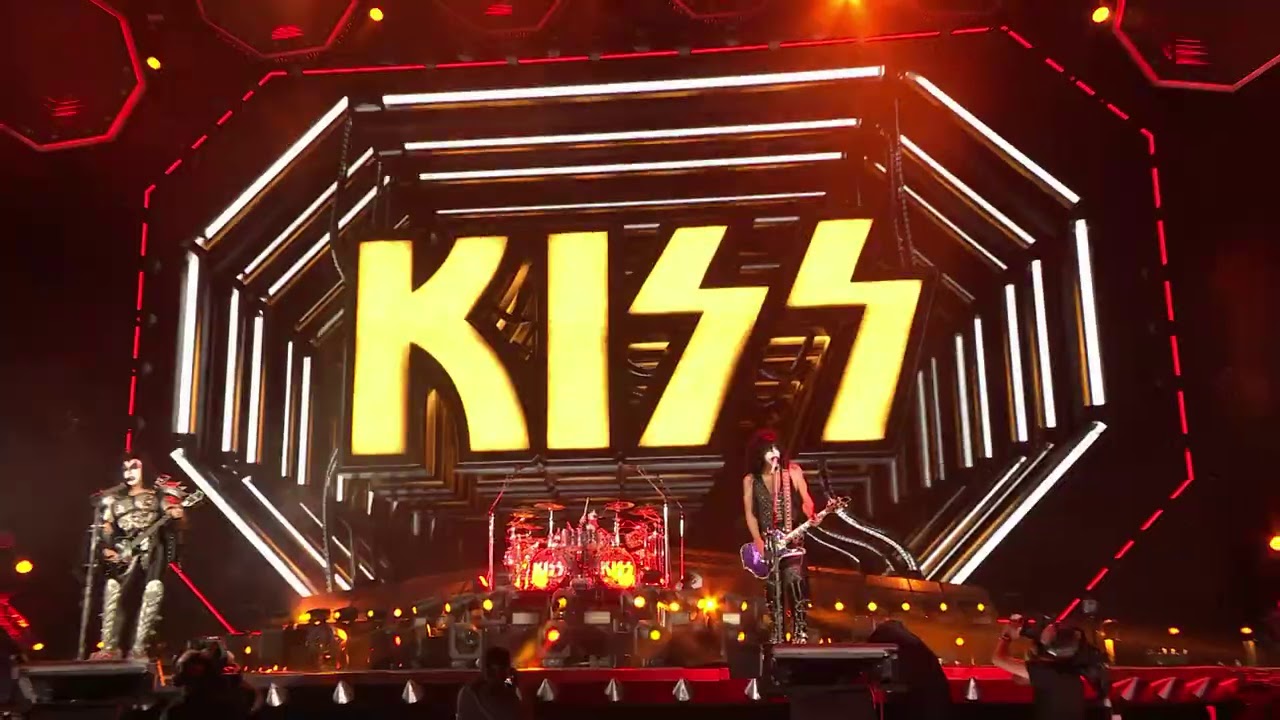