The Lowdown: It has been five years since Rob Zombie’s last release, but The Lunar Injection Kool Aid Eclipse Conspiracy makes the wait worth it. With an impressive 17 tracks, Zombie decided not to mess with a winning formula. The new effort continues with the same lineup as the previous two albums (2013’s Venomous Rat Regeneration Vendor and 2016’s The Electric Warlock Acid Witch Satanic Orgy Celebration Dispenser): Zombie on vocals, John 5 on guitar, Piggy D on bass, and Ginger Fish on drums. It also has the same producer as the previous album, the mysteriously named Zeuss (Queensrÿche, Hatebreed, Municipal Waste). The result is exactly what you would expect from Zombie: a well-produced and expertly written spooky, groovy, heavy, horror-inspired rock album with some added surprises.

The Good: In a world full of uncertainty, it really is comforting that Rob Zombie is still the man to see if you want to bang your head to songs about witches, graves, and monsters. Songs like “The Ballad of Sleezy Rider”, “The Satanic Rites of Blacula”, and “Shadow of the Cemetery Man” are catchy, heavy fun with a solid rhythm section and expert guitar work. “Boom-Boom-Boom” is a standout with its churning groove evocative of “Pussy Liquor” from the House of 1000 Corpses soundtrack. Another is the single “The Eternal Struggles of the Howling Man”, which features some sick metal guitar riffs from the talented John 5.

Something that is worth noting is the evolution of the instrumental tracks on The Lunar Injection Kool Aid Eclipse Conspiracy, like the hypnotic “The Serenity of Witches” and the beautiful “The Much Talked of Metamorphosis”. Zombie is known for his prominent use of samples and keyboards to add atmosphere to his songs, usually presented in the form of an intro to a track. However, on his recent albums, these experiments with sound have morphed into some genuinely intriguing stand-alone instrumental songs. Since John 5 has released eight solo albums as a virtuoso guitarist, one can surmise that this evolution of the instrumental pieces in Zombie’s work are partly the guitarist’s influence.

The Bad: One might say this is more weird than bad, but “18th Century Cannibals, Excitable Morlocks and a One-Way Ticket on the Ghost Train” has got to be the biggest deviation on the album from the Zombie norm (if there is such a thing). It has a country-ish sound reminiscent of Primus’ penchant for strange arrangements and old timey Americana. Zombie has proclaimed himself a “hellbilly” and it appears he is taking this moniker to the next level. This track raises the question: can industrial-country be considered a thing? Although it is not totally out of left field, as it does remind one a little bit of “Well, Everybody’s F**king in a U.F.O” from The Electric Warlock Acid Witch Satanic Orgy Celebration Dispenser.

The Verdict: While “The Triumph of King Freak (A Crypt of Preservation and Superstition)” was the first single off of this album, the track that really encompasses the overall vibe has got to be “Shake Your Ass-Smoke Your Grass”. As with most of the LP, the instrumentation and lyrics are equal parts memorable and evil. Let’s face it, memorable and evil are two traits any fan would want from a Rob Zombie album.

Essential Tracks: “Boom-Boom-Boom”, “Shake Your Ass-Smoke Your Grass”, “The Ballad of Sleezy Rider”, “The Eternal Struggles of the Howling Man” 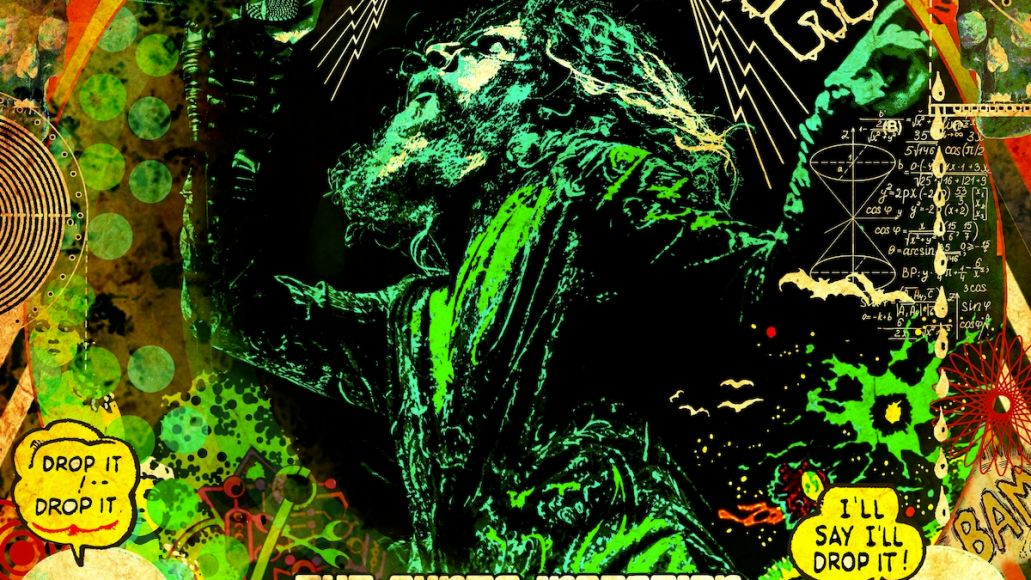 The Lunar Injection Kool Aid Eclipse Conspiracy Tracklist:
01. Expanding the Head of Zed
02. The Triumph of King Freak (A Crypt of Preservation and Superstition)
03. The Ballad of Sleazy Rider
04. Hovering Over the Dull Earth
05. Shadow of the Cemetery Man
06. A Brief Static Hum and Then the Radio Blared
07. 18th Century Cannibals, Excitable Morlocks and a One-Way Ticket On the Ghost Train
08. The Eternal Struggles of the Howling Man
09. The Much Talked of Metamorphosis
10. The Satanic Rites of Blacula
11. Shower of Stones
12. Shake Your Ass-Smoke Your Grass
13. Boom-Boom-Boom
14. What You Gonna Do with That Gun Mama
15. Get Loose
16. The Serenity of Witches
17. Crow Killer Blues