The Pitch: There’s something mysterious about Lone Palm Island. Marie Aldrich (Jocelin Donahue) and her friend George (Joe Swanberg) head to the island community after receiving a letter from the caretaker of her mother’s grave notifying her that it’s been vandalized.

They arrive to find the island closed to tourists for the offseason, not to reopen until Spring. While searching for answers, and for the mysterious caretaker, Marie and George realize they may be the latest to fall into a horrific trap spanning generations.

Mickey Keating’s new film expertly combines the natural beauty of a small beach town with Southern gothic imagery to create a terrifying ghost story. But like a road trip with no map, it’s often hard to discern where this tale is going.

Southern Gothic: Offseason’s greatest strength is its atmospheric spookiness. Filmed on New Smyrna Beach, Florida, Keating takes every opportunity to showcase the beach-worn scenery. Long shots on a stormy beach evoke feelings of isolation and terror, and the mostly deserted Main Street feels like a ghost town lost at sea.

Lush greenery and a subtly shifting landscape effectively capture the notion that the island itself is dangerous and the use of the island’s North Causeway Bridge, manned by a creepy harbinger-like gatekeeper (Richard Blake), creates a disorienting visual boundary, further adding to the ominous isolation.

Perhaps the most effective imagery is a beach saloon filled with local townspeople, who seem oddly concerned with the new arrivals. When viewed from outside the window, they are frozen in time, waiting for their guests to arrive so the show can begin. A veil of mist permeates each scene creating a sense of mystery and keeping us from ever fully seeing the terror lying in wait, and a breathtaking climactic shot perfectly capitalizes on less is more storytelling.

Offseason is nothing short of gorgeous and its lush but lived-in details only serve to enhance the terror. 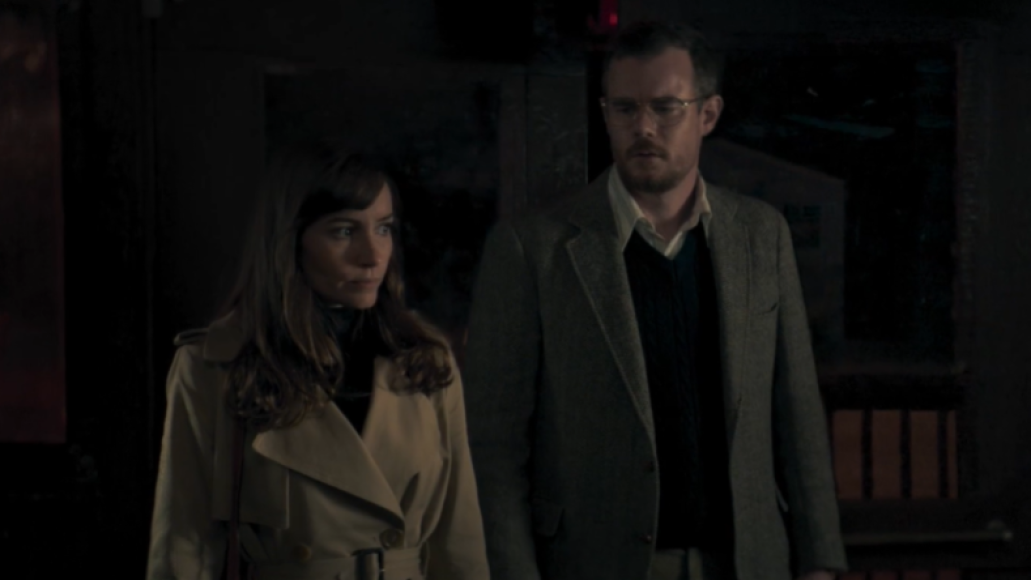 Slow Burn: The minimalist creature design is equally spooky and there are several moments of genuine terror. However, the slow pacing and disjointed narrative undercuts a lot of what makes the film so scary. Some of the jump scares don’t work. Reaction shots are drawn out so long that it’s difficult to remember what the character was looking at in the first place. And there’s a video game feel to the plotting as Marie and George navigate through different set pieces, learning or recalling large chunks of information in scenes that feel like they’re set in the staging area between levels. One jump scare, in particular, repeats so many times in a row that it begins to feel like absurd humor or satire of the genre.

Road to Nowhere: Unfortunately, this less-is-more approach doesn’t translate to the story. The film begins with Marie’s mother Ava delivering cryptic warnings while looking directly into the camera, then screaming at an unseen threat. This effectively sets the disorienting tone, but introduces story elements that are never developed. We learn that Ava was a famous actress, and that Marie is a “problem child”, but neither of these facts impact the story in a meaningful way and don’t provide context to the sparse narrative. Similarly, we never learn how George is connected to Marie or anything else about these characters lives aside from their presence on the island. The mystery is fascinating, but it also feels like giant holes have been left out of the telling.

Several times, Marie asks a character what’s going on and it’s hard not to ask the same question as a viewer. Characters break the fourth wall to deliver large chunks of exposition. Or do they? The POV is never clear. With a firmer hand, this sense of disorientation could enhance the plot’s mystery, but it winds up just confusing the audience. Similarly, the plot details are so sporadic and disconnected that it’s hard to care about the revelations by the end. There is a fantastic story here, one to match the haunting imagery, but we never learn enough about it to draw us in.

The Verdict: Southern gothic imagery is undoubtedly Offseason’s saving grace, and enough to carry viewers through the film, provided they don’t expect clear answers. It’s worth watching for its disorienting and intoxicating atmosphere, but there’s not much narrative substance beyond that. In a sense, it’s a beautiful car ride through lovely scenery, where the final destination is right back where we started. Sure, the trip was nice, but we’re left with nothing more than keychains from the gift shop.

Offseason Is a Terrifying Road Trip to Nowhere: SXSW Review