The Pitch: While Tom Petty’s work with The Heartbreakers gave us some of the most iconic country-rock tunes of the past half-century, Petty purists likely cite his second solo album, 1994’s Wildflowers, as his arguable creative apex. But for all the relaxed charms of songs like “You Wreck Me” and “Only a Broken Heart”, the album was made at a particularly tumultuous time for the artist, including creative struggles with MCA, clashes with Heartbreakers drummer Stan Lynch, and the end of his first marriage.

While Petty died in 2017 from an accidental drug overdose, we have some new insights into this part of his life courtesy of a newfound treasure trove of 16mm film recordings documenting Wildflowers’ long studio recording sessions, which longtime music documentarian Mary Wharton has crafted — alongside new interviews with the figures who were there, from bandmates to album producer Rick Rubin — into Tom Petty: Somewhere You Feel Free.

It’s Good To Be King: Petty’s always seemed like a likable guy both on and off stage, the kind of guy who’d just sit at the corner of a party and talk to whomever passed by him. It’s that vibe that permeates Somewhere You Feel Free‘s extensive archival footage, as he jams with bandmates and generally horses around with Rubin and the others. He’s got that Willie Nelson chill about him, which contrasts of course with the personal tumult that surrounded him (revealed in voiceovers from Petty’s daughter, other figures, and Petty himself on occasion).

“I don’t like talking to people, I just want to be a musician,” Petty says early in the doc. Wharton and editor Mari Keiko Gonzalez’s assemblage of the aforementioned footage, with their accompanying talking head interviews and animated renderings of songs and images from the album, bear that out; it’s much more an observation of Petty from the outside — the experience of making Wildflowers with Petty, or recognizing the personal issues he was going through at the time — than it is a probing dissection of the man’s psyche from within. 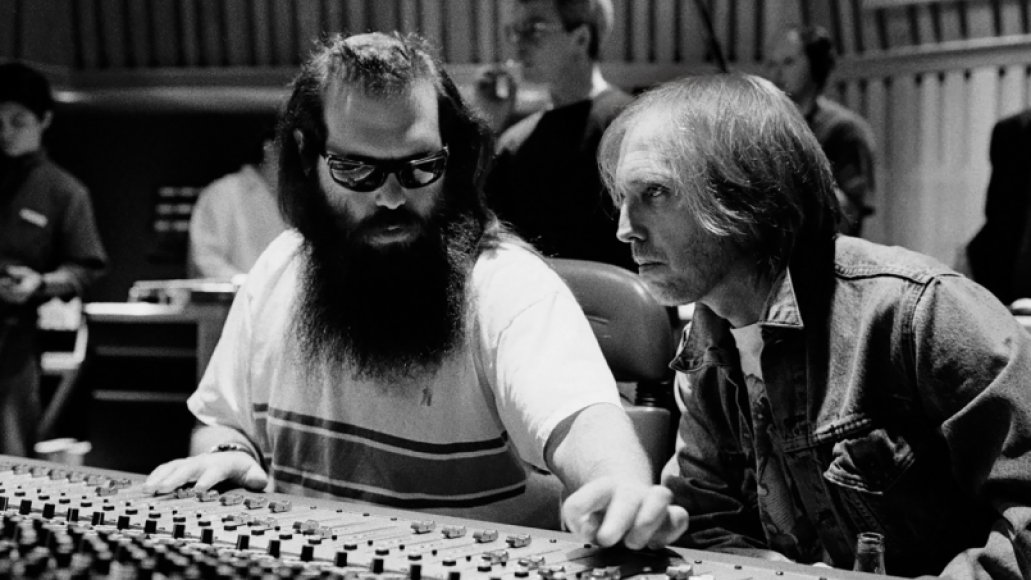 You Don’t Know How It Feels: As music docs about dead rockers go, Somewhere You Feel Free feels somewhat toothless. Nowhere in the archival footage do you see clashes with producers or bandmates about the direction of the album, in-session meltdowns, or any of the kind of drama you’d expect from a fly-on-the-wall look of an artist in crisis.

While this reflects well on Petty — a man who seemingly kept his conflicts out of sight and didn’t take them out in plain view of his collaborators — it makes for an almost too-breezy presentation here. For instance, Petty’s issues with Lynch are kept largely off-screen, instead focusing on the positive vibes of bringing in studio drummer Steve Ferrone to replace him (and who’d play with The Heartbreakers until Petty’s death).

It’s pleasant, but almost a little too glossy. One wonders what torments lay under the surface for Petty given his personal issues during this, as Dewey Cox would say, “dark fuckin’ period”. Whether due to the limitations of the footage or the sunny brief of the doc itself, Somewhere You Feel Free isn’t all that interested in digging deeper.

Tom Petty Taught Me Everything I Need to Know About Love

The Verdict: Not all music documentaries have to be Behind the Music-level exposes on an artist in torment. It’s also understandable to be more celebratory and uncritical of a man who, by most accounts, was a pleasant, easygoing guy who quietly dealt with his own demons. So, if you just want to vibe with Petty and the Heartbreakers (almost all of whom basically worked as his backing band for Wildflowers) as they plink away at guitars, talk about their dreams for the album, and play “Won’t Back Down” on ukelele, Somewhere You Feel Free is a beautiful musical tribute to one of rock’s greatest figures, gone all too soon. Just don’t expect to learn too many deep dark secrets about the man in the process.

Where’s It Streaming? The documentary is currently making the festival rounds.