The Pitch: The denizens of South Park are desperate to get their hands on the vaccine. Teachers especially are on the verge of quitting, and you would too if you were expected to put up with the likes of Eric Cartman face-to-face without adequate protection. Sadly, Mr. Garrison is one of the few educators willing to step back into the classroom under these conditions. So Stan, Kyle, Cartman, and Kenny will go to any lengths to get their old teacher the shot she needs to rid themselves of the former President come home.

But there are, of course, complications. For one, South Park’s local QAnon crazies believe the vaccine is part of an idiotic yet sinister plot and will stop at nothing to prevent it from being distributed. For another, the kids have to fend off scores of other ravenous shot-seekers, including their own guilt-tripping parents, to get the medicine where it’s needed. And if that weren’t enough, the boys’ “bro-ship” is crumbling under the weight of the past year. With all that to contend with, it’s a tall order for the series’ main quartet to deliver the vaccine in time to bring things back to “normal.”

The Vax of Life: The central comic conceit of “The Vaccination Special” is that pharmacies and other shot-dispensaries have become modern day exclusive clubs. Dozens of hopefuls line up just itching to get in; a burly bouncer turns away posers who are “not on the list,” and grannies are the new superstars, receiving VIP treatment from the staff and grumbles of resentment from those in line. It’s a chuckle-worthy representation of the clamor and confusion folks labor under when trying to obtain a vaccine, but it’s also too shallow a gag to stretch out over the course of a whole hour.

Unfortunately, South Park doesn’t have much else to offer in the way of laughs from the quest to receive the famed “Fauci ouchie.” There’s a handful of pointed moments where the show tweaks the authorities over who is and isn’t prioritized in the pecking order. The younger citizens’ weak attempts to sneak into a local Walgreens provides some minor yuks. But the show never really finds another gear or a broader point with any of this. Instead, it’s content to coast on overextended riffs on “shot envy” and tired “old people acting rowdy” shtick. 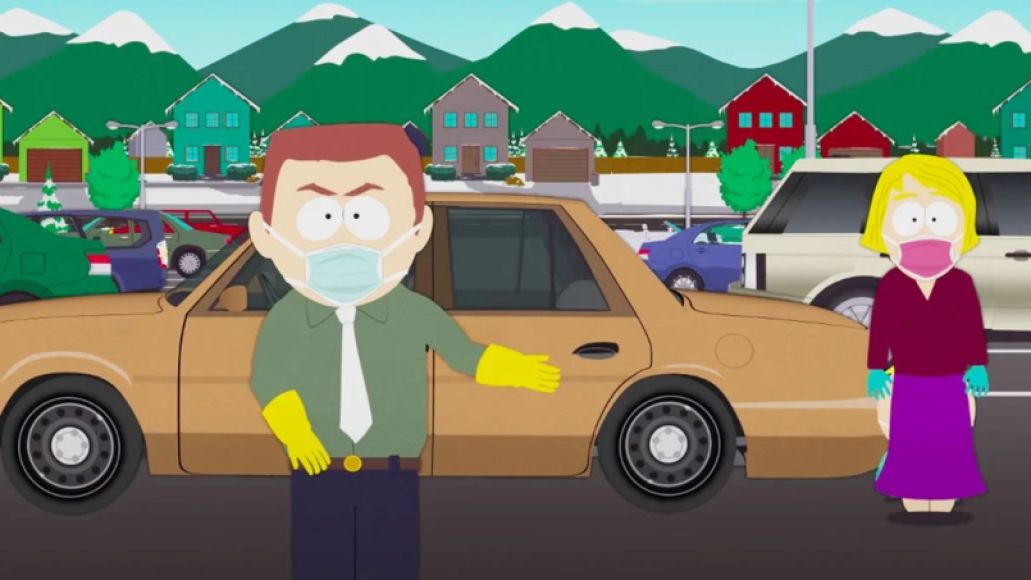 The Q Continuum: Somehow, the special’s take on QAnon is even milder and more toothless. The best the show comes up with to spoof the poor deluded souls who believe this reheated 4chan garbage is tepid puns like “South ParQ”, “Tutornon”, and “Q-Ties”, and strained deconstructions of poop-based schoolyard insults. Worse yet, the episode gives the conspiracy’s views a surprising amount of oxygen, putting together a montage of the group’s core beliefs in graphic detail without the benefit of a “This Is What QAnon Supporters Actually Believe” disclaimer. Hell, in the episode’s most baffling choice, in key moments one of the show’s mouthpieces goes so far as to try to justify the group’s militant insurrectionists.

In some ways, QAnon is beyond parody, both because its central tenets are facially ridiculous and because it’s nonetheless caused real damage to this country. That’s not an easy thing to make funny. But even with that challenge, South Park has next to nothing in its comedic arsenal to aim at this self-evidently stupid conspiracy theory. The single good hit the episode lands comes when it points out that the Q-believing dolts worship Garrison-as-Trump, despite the fact that he looks down on them and wants nothing to do with them. Still, it’s thin broth for one of the special’s main targets. 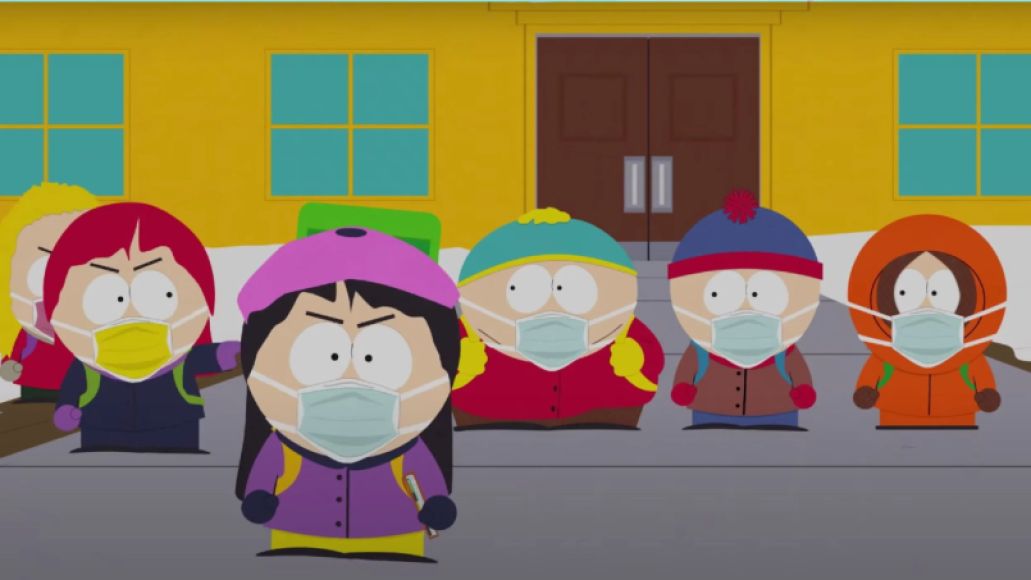 Schmuck Amuck: The only truly interesting or novel element of “The Vaccination Special” is the self-referential jabs against Trey Parker and Matt Stone themselves as “the elites” whom South Park’s QAnon devotees are railing against. It leads to some reasonably amusing, moderately trippy, Chuck Jones-style shenanigans with Mr. Garrison. The animators mess around his running buddy, Mr. White, and Garrison himself makes a deal with the powers that be to put him back in the town’s good graces.

It’s also the only mildly cutting observation in the whole hour. Mr. Garrison is desperate to have things go back to normal and shed the (literal and figurative) baggage he’s accumulated over the years. It symbolizes how wide swaths of the country would prefer to treat the past four years as some kind of bad dream and just get back to business as usual. The show seems to agree, even reverting Garrison’s new thong-sporting “Mr. Service” back into good ol’ Mr. Hat.

But the special suggests there’s something sinister, maybe even dangerous, about trying to sweep all that under the rug and go back to how things were. Mr. Garrison is simply sliming his way closer to whatever power’s closest and most convenient and seems to have more malevolent plans in store. Whether that means more interactions with his real world creators remains to be seen, but the special’s stealthy point about the perils of pretending this whole thing never happened is one of the few potent ideas in the episode. 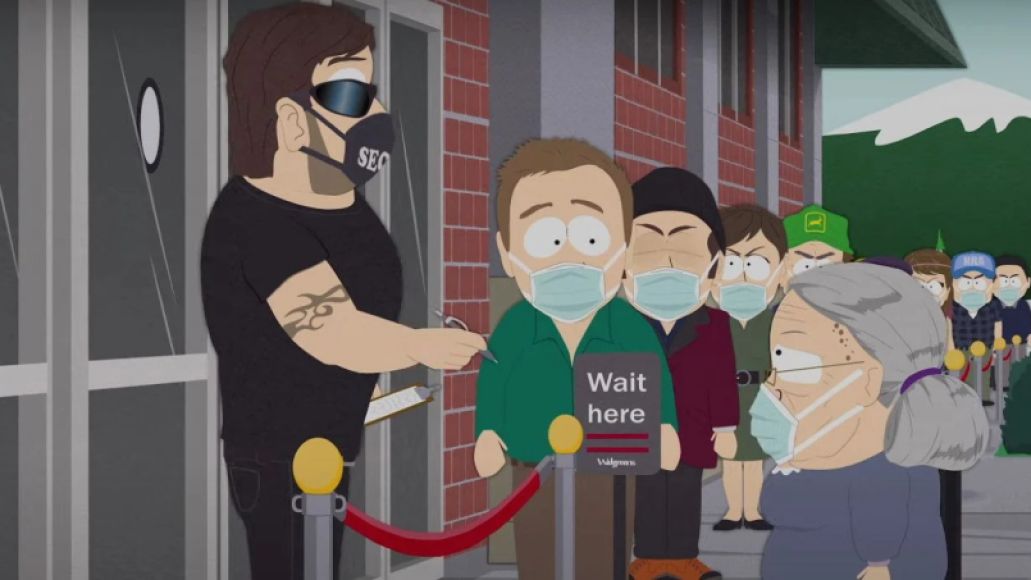 The Verdict: Nobody said it was easy to find the humor or grand insights in people desperate for an end to the pandemic, dangerous conspiracy nuts, and the strain the past year has put on relationships of all stripes. But maybe we expected too much after South Park pulled it off in its last outing. “The Pandemic Special” succeeded by rooting its take on 2020 in the show’s usual brand of absurd comedy, but also in some genuine candor and earnest reflections on the difficulty everyone’s been going through since this all started.

The “Vaccination Special” has none of this. All it offers instead are tired jokes about vaccination centers as exclusive party spots, unambitious bits that half-justify QAnon, and bargain basement divorce jokes. It’s a lumpy, aimless hour of television, offering a grab bag of scattered thoughts on the news of the past few months without a strong point of view or sharp comedic take on any of it. It’s undeniably a challenge to wring humor from inoculation, insanity, and insurrection, but you’d expect 24-year pros to be up to it, or at least able to come up with something other than this dud.

It’s a fool’s errand to try to read between the lines when it comes to how much the statements and sentiments of Stan, Kyle, Cartman, and Kenny reflect those of the grown men who bring those characters to life. But the boys’ dysfunction in the special seems to speak to a self-aware inability of the show’s founders to get on the same page, and a sense of creative exhaustion within the team that tells the kids it’s finally time for them to go their separate ways.

South Park has played this game before and nevertheless kept running for another decade. But this might be Trey and Matt letting the audience know they’re on the verge of tapping out. This special would be a less-than-worthy swan song for the signature series, and certainly anything done mid-pandemic deserves to be graded on a curve. But if this is the best the duo have in their satirical tanks after nearly a quarter century on the air, the boys might be right. It may be time for South Park to throw in the towel.

Where’s It Streaming? “The Vaccination Special” will be available to stream on HBO Max on Thursday at 8 p.m. ET / 7 p.m. CT.

Editor’s Note: Still waiting on your vaccine? Or just want to protect your friends and family better than the South Park boys did? Then pick up one of our custom face masks. A portion of the proceeds will benefit MusiCares’ COVID-19 Artist Relief fund supporting independent musicians.

The South Park Vaccination Special’s Only Immunity Is to Comedy: Review