It’s a tale as old as time: young woman is traumatized, radicalized, and experimented upon; A.I. takes physical form as a robot before evolving into something more traditionally, distinctly human. Woman and humanoid robot fall in love before humanoid robot is killed and woman, in her grief, semi-accidentally takes an entire town of people hostage.

Explaining the concept of WandaVision to anyone not familiar with the expansive Marvel Cinematic Universe presents a bit of a challenge. Perhaps the even bigger challenge is then trying to communicate the way that the show so effectively becomes a truly emotional story. Over the course of nine episodes, WandaVision shares more about the two titular characters than the five movies that featured Elizabeth Olsen as Wanda Maximoff or the seven in which Paul Bettany appeared in some capacity as Vision (the artist formerly known as J.A.R.V.I.S.).

When we first meet Wanda and Vision within the context of the show, they are picture-perfect in black-and-white. “Aren’t we a fine pair?” Vision asks in one of his first lines. Wanda smiles in response, pleased and exaggeratedly demure. It’s not long before the facade starts to crack, at first in glimpses and then enormously and violently, but the show takes its time getting there. It’s almost luxurious — although plenty of people did raise a ruckus over the weekly episodic rollout, highlighting how much of a rarity such formatting is in the streaming era of binge-watches. The choice to structure a streaming show like traditional television was a not-so-subtle wink in a show about television. 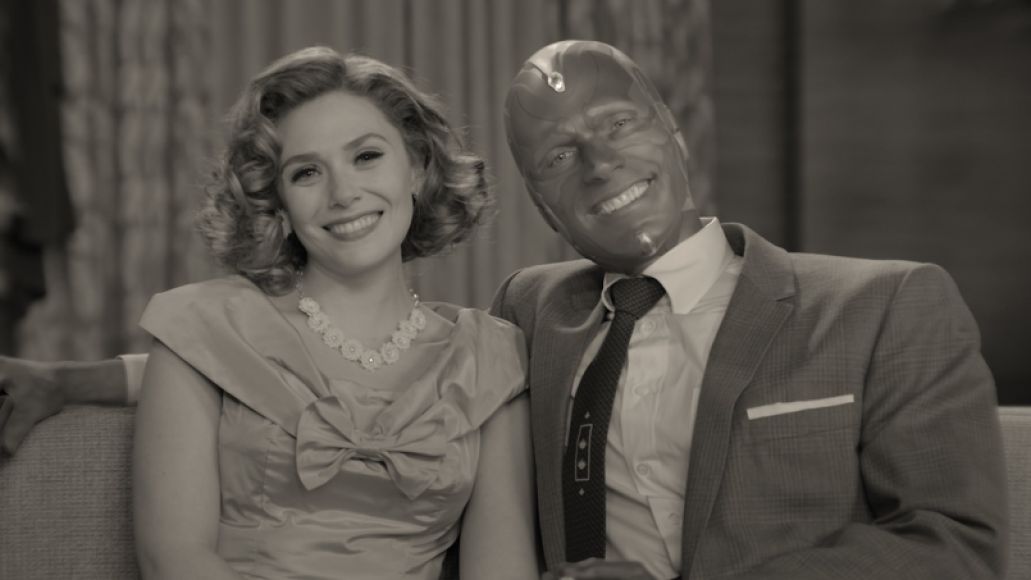 In the grander scheme of things, though, it’s less about television or the fun formula. As wondrous as it is to watch Olsen and Bettany nimbly glide through each era, playing with familiar tropes, the show is most impressive in its explorations of Wanda’s trauma and unbearably heavy grief. There are few other characters within the MCU that have experienced loss as constant and dramatic as Wanda’s: parents, brother, lover. After being tacked onto various teams throughout the films, WandaVision finally put the Scarlet Witch where she belongs — front and center, as the star of her own show.

In doing so, Marvel has perhaps delivered the most authentically “feminist” work in its repertoire to date. By giving Wanda time and space to breathe in a narrative of her own design, her interior life becomes the focus, rather than her “powers” (excluding some slight stumbles in the finale). Such storytelling is more effective in highlighting a woman within the slick Marvel world than any of the staged Girl PowerTM moments seen in Infinity War or Endgame.

WandaVision also unpacks the Marvel formula a bit, almost moving backwards: Previous efforts typically introduce a Hero, downtrodden and sympathetic, before naming the Villain, tossing in a few sidekicks for laughs along the way, and gearing up to a Big Showdown. By contrast, hardly a punch is thrown in WandaVision until the finale; in fact, there’s arguably no traditional villain. Granted, Wanda is not the easiest to root for, especially once the terror of the helpless individuals of Westview starts to be revealed, but trauma is messy, grief is volatile, and both ask huge questions. WandaVision correctly provides no easy answers. 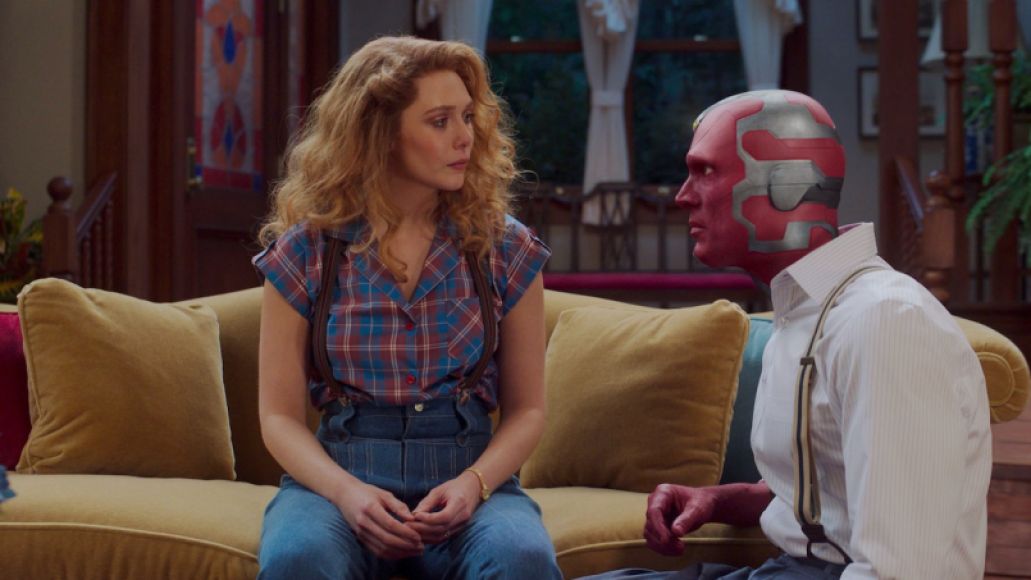 And while Kathryn Hahn nearly steals the show, make no mistake: WandaVision belongs to Olsen, who deserves an Emmy nod for the remarkable eighth episode alone. The gut-wrenching entry follows Wanda through some of the most formative moments of her life, requiring Olsen to share the character’s broken heart more viscerally than ever before. The episode also includes the line that sent the Internet into a spiral: “What is grief, if not love persevering?” Beyond the millions of memes, let it be known that this line isn’t just good — it’s wonderful. It’s a simple and honest piece of dialogue that rings painfully true, particularly in a time distinctly marked by immeasurable collective grief. For all the sparkles and tricks her powers yield, Wanda is still just human, and her fantasy is the product of a breaking point — something all too familiar in this specific age.

By the end, our powerful Scarlet Witch, having achieved her illuminated final form, of course realizes that life cannot be wrapped up in 40 minutes plus commercials, but the show does wind down on a note of bittersweet closure. Wanda experiences painful loss once again, this time relinquishing her grip on Westview, bidding farewell to the projections of a loving husband and rambunctious children in the process. Once again, rather than concluding with a traditionally Marvel physical fight, the ending is a devastating moment of quiet. The inevitable encroaches on Wanda’s fantasy. She tucks her children into bed one last time before having to let go of Vision all over again. 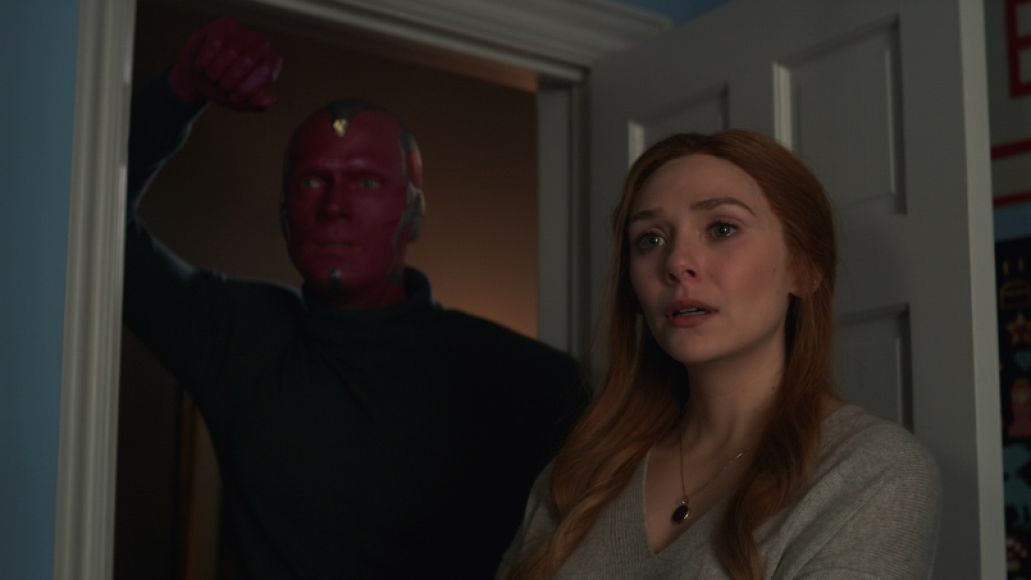 He sheds a tear with the line, “We’ve said goodbye before, so it stands to reason —”

At first glance, it seems like we leave Wanda exactly as we found her: frightened and alone. Some change isn’t visible, though, and while loss continues to underscore her journey, Wanda has been fundamentally transformed. (She even found some notable allies in the process; it’s hinted that Monica Rameau, and, hopefully, absolute treasure Agent Jimmy Woo will return.)

Having said that, WandaVision functions best in its own little microcosm — like Westview. Like all great episodes of TV, it should be enjoyed for what it is — not what might come next. Don’t worry about Phase 4. Don’t worry about the X-Men, or Dr. Strange, or all the Easter eggs and cameos. Worry about the woman who wants to find peace — and maybe even a happy ending.