The Pitch: The Creep is back with a brand new batch of terrifying tales! Shudder’s horror anthology series based on the 1982 film kicks off its second season by embracing horror nostalgia and sending a blood splattered love letter to genre devotees. Showrunner Greg Nicotero directs both segments and leans into horror’s emotional core, all while highlighting some of its most beloved iconography.

The return of Creepshow is the perfect way to kick off Shudder’s Halfway to Halloween Month as each story feels like a fun-sized piece of horror candy. Though the subject matter is dark and emotionally heavy, Nicotero deftly uses the trademark comic-style framing and campy gore to maintain a light and even gleeful tone in what could easily drift into emotionally heavy territory.

The first episode is a fun trip back to the 1970s and we join the Creep as he loads reels of Gillman Meets the Mummy onto a bedroom projector. After flipping through the pages of the titular comic book, with brief detours through the Dead Letter Office and a fun bit of Guest Star foreshadowing, we’re off to the races with our first tale… 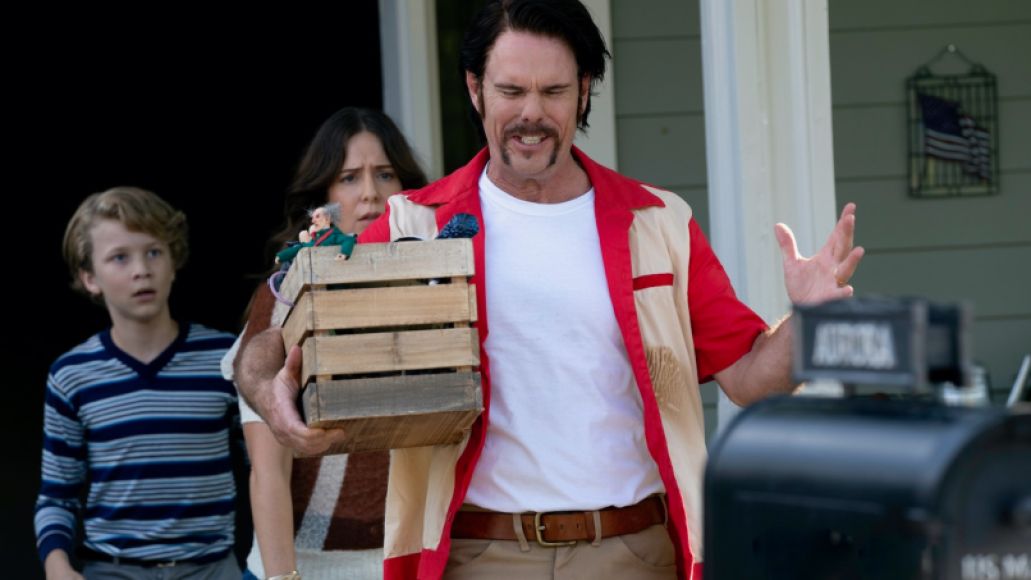 “Model Kid”: The first vignette begins with a silent film as Gillman and the Mummy battle each other for a captive damsel in distress. Interrupted by a mother’s voice, we’re dragged back to reality to find that this story is playing out in the imagination of Joe Aurora (Brock Duncan), a horror-obsessed tween who feels more comfortable in a Dracula costume than his school clothes.

Luckily, Joe’s mother June (Tyner Rushing) fully supports his love for the macabre and the two bond over silent horror films and a big bowl of popcorn. Joe’s life is turned upside down with the arrival of his Aunt Barb (Jana Allen) and abusive Uncle Kevin (Kevin Dillon) who become his guardians after his mother passes away from cancer. 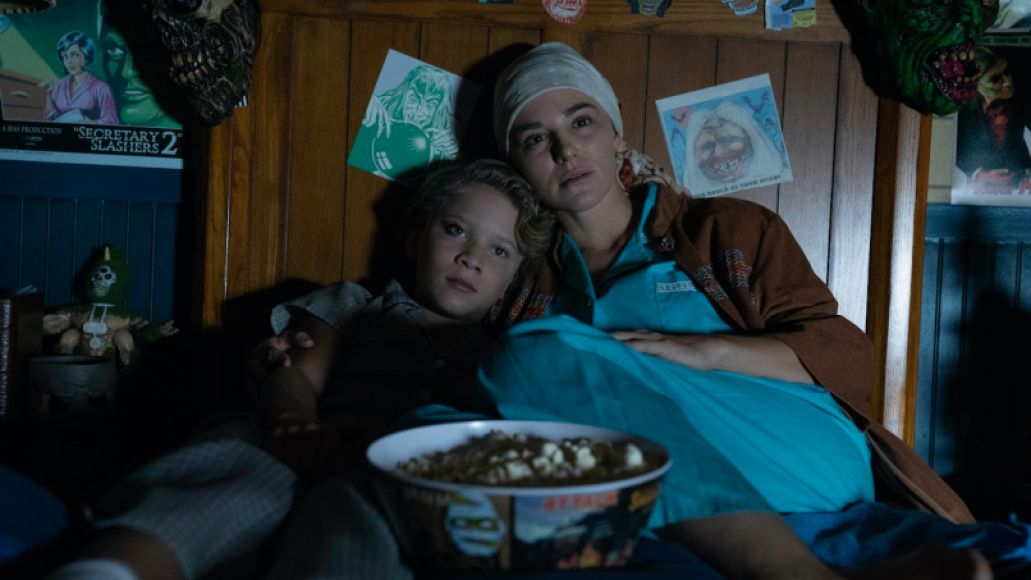 The rest of the story plays out rather predictably as Kevin orders a new model kit ominously titled The Victim, but it’s nonetheless a loving tribute to the Universal Monsters era and a big wink and nod to the framing device of the original Creepshow. Dillon is particularly disgusting as boorish Uncle Kevin, and his demise, albeit mean-spirited, is gory and cathartic wish-fulfillment.

As the audience’s emotional conduit, Joe effectively taps into feelings many horror fans know all too well, especially those who grew up in families that didn’t understand them. We feel for Joe as he is picked on and many of us know the feeling of having our interests belittled and dismissed. But what makes “Model Kid” so effective is that it also shows the connective power of the genre as Joe’s dying mother reminds him that every time he pushes play on a movie they shared together, she’ll be with him. 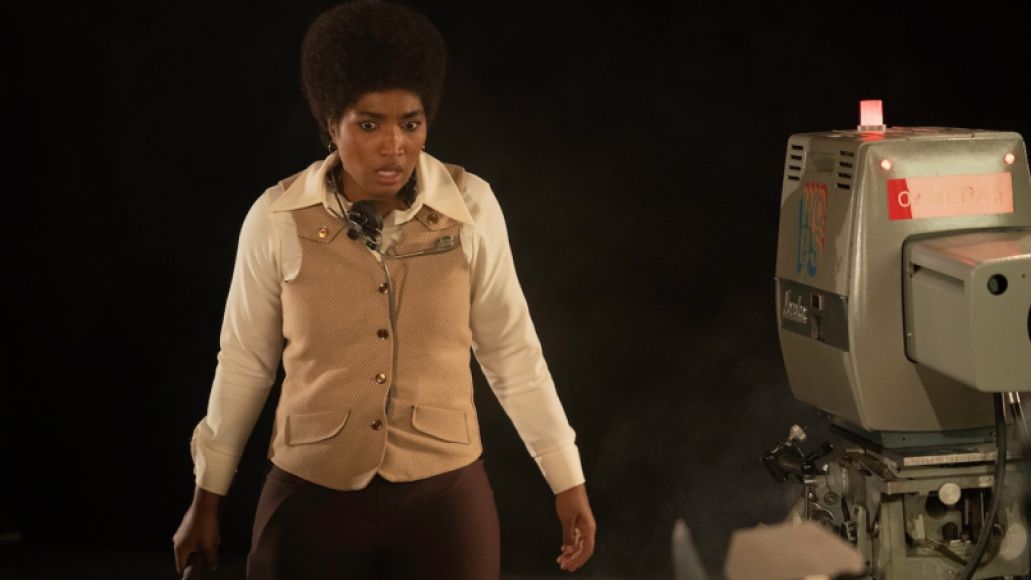 “Public Television of the Dead”: The second story takes place at a ’70s era Pittsburgh Public Television station that’s kicking off its annual pledge drive. Leading the charge is Mrs. Bookberry (Coley Campany), a children’s storyteller whose wholesome persona hides a foul-mouthed racist gleefully willing to toss her weight around at the station. 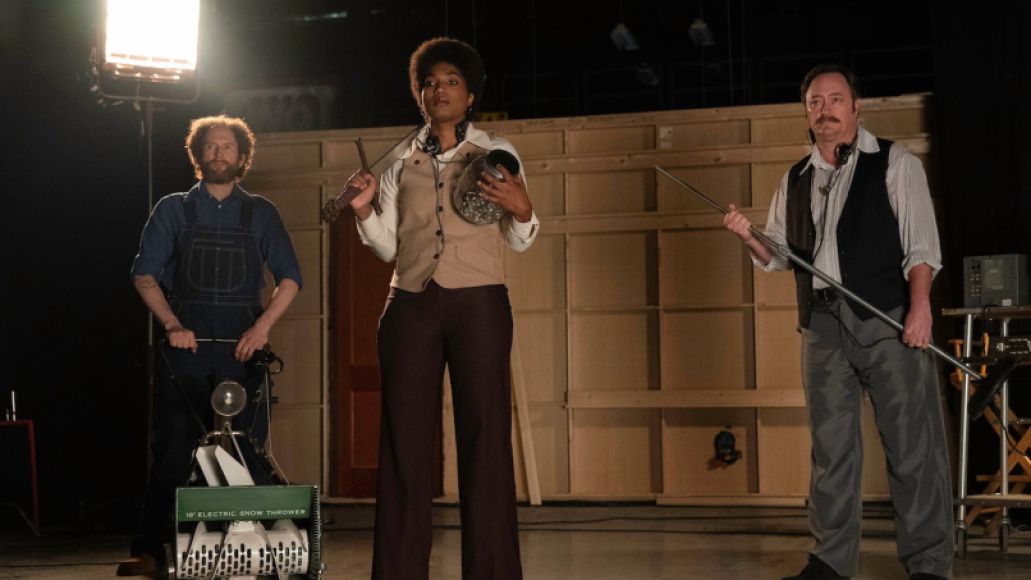 While this story is best not spoiled, it effectively shows horror’s ability to present socially relevant messages as well. As the threat grows, Claudia, Norm, and producer George (Todd Allen Durkin) must band together to stop the mass dissemination of dangerous stories through nefarious sources. Is there a more apt representation of the current media landscape?

But, like “Model Kid”, “Public Television of the Dead” also demonstrates the unifying quality of the genre and the empowerment gleaned from watching regular people stand up to evil. It’s pretty groovy.

The Verdict: The Season 2 premiere of Creepshow honors the best of what the genre has to offer. The effects are campy and the stories are over the top, but that’s all part of the fun and arguably what hooked horror fans in the first place.

Keeping on that theme, this episode curiously doubles as a deceptively poignant time capsule, one that reminds us why we love the genre in the first place. After a long year of fighting seemingly endless battles and finding connection in any way we could, many of us have learned that it’s our shared love for horror that has carried us through.

Because really, when the bullies of the world felt like too much to bear, our beloved monsters were there to cheer us up. And when we needed to find empowerment, often it was horror that reminded us that we do have power if we’re brave enough to use it.

But that’s the genre. Horror has the unique ability to help us understand what we’re afraid of and to show us how strong we can be. Without sounding too precious, we all have a little bit of the Creep in us, and Creepshow shows us the joy of letting him shine.

Where’s It Streaming? Creepshow‘s pages are currently flipping now on Shudder with new episodes expected every Thursday in the subsequent weeks ahead.