The Monsters of Rock Cruise will return in 2022 with a lineup headlined by Alice Cooper and featuring a who’s who of ’80s hair-metal bands. The rockin’ boat trip sets sail February 9th from Miami, hitting the Bahamas and Haiti before returning on February 14th.

The cruise also serves as a trip back in time, as ’80s stalwarts like Queensrÿche, Skid Row, Cinderella’s Tom Keifer, L.A. Guns, Kix, Winger, Michael Monroe, Great White, Loudness, Vixen, and more will all be aboard. ’90s rockers Lit are also on the bill for the Monsters of Rock Cruise, which will be hosted by former That Metal Show stars Eddie Trunk, Don Jamieson, and Jim Florentine, among others.

The itinerary will take attendees from Miami to the private CocoCay port on the Bahamas, followed by the private island of Labadee in Haiti. Among the activities at the various stops will be amusement parks, zip lining, snorkel safaris, kayak tours, and more.

Throughout the cruise, there will numerous chances to interact with the musicians, including Q&A sessions, “Gong Show Karaoke”, “So You Think You Can Shred”, “Cooking with Rock Stars”, “Painting With Rock Stars”, “Rock Stars vs Average Joe Basketball”, and more.

See the full lineup in the poster below, and pick up tickets at the official Monsters of Rock Cruise website. 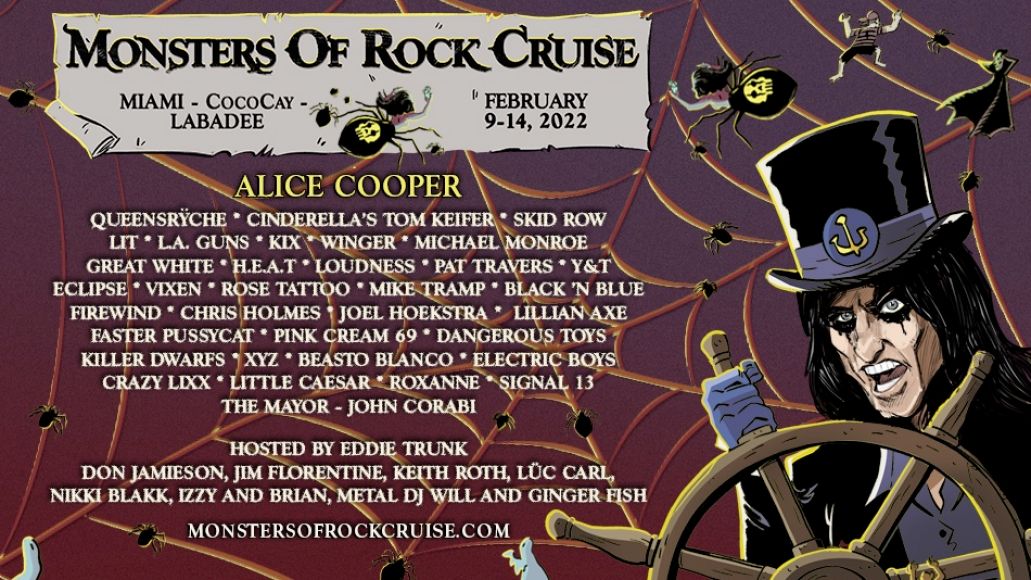