Later this month, Jay Som (Melina Duterte) and Palehound’s Ellen Kempner will release their debut album together as Bachelor. It’s too risky to celebrate Doomin’ Sun’s release by playing a concert for fans right now during the pandemic, so the duo have organized the next best thing: a star-studded livestream music festival. Say hello to Doomin’ Sun Fest, a free event on June 10th featuring Tegan and Sara, Courtney Barnett, Ben Gibbard, and dozens of other artists.

Doomin’ Sun Fest is billed as both a massive livestream festival and a telethon to benefit Seeding Sovereignty, an Indigenous-led collective that disrupts colonized spaces through land, body, and food sovereignty work. The festival will kick off at 6:00 p.m. ET on June 10th and will be followed by a a virtual afterparty inside the 3D social game Hotel Hideaway.

In addition to the previously mentioned artists, Doomin’ Sun Fest will also include performances by Sylvan Esso, Adrianne Lenker of Big Thief, Jeff Tweedy, Japanese Breakfast, Tank and the Bangas, Soccer Mommy, Tune-Yards, Julien Baker, Lucy Dacus, and Jeff Rosenstock. Bachelor will live-host the festival and, of course, it will culminate in the first-ever Bachelor concert as well.

10 Years with Tegan and Sara: On High School, The L Word, and Growing Up in the ’90s

“Basically we just wanna have fun celebrating our album release, raise funds for Seeding Sovereignty, and get people excited about donating and opening their hearts to themes of the fest — the ‘4 C’s’ as we call them — that are driving this endeavor,” wrote Bachelor in a press release. “Community, Compassion, Climate, and Celebration!”

Doomin’ Sun Fest will be free to attend, but donations to Seeding Sovereignty are highly encouraged. RSVP at the festival’s website and check out the official poster for it below. 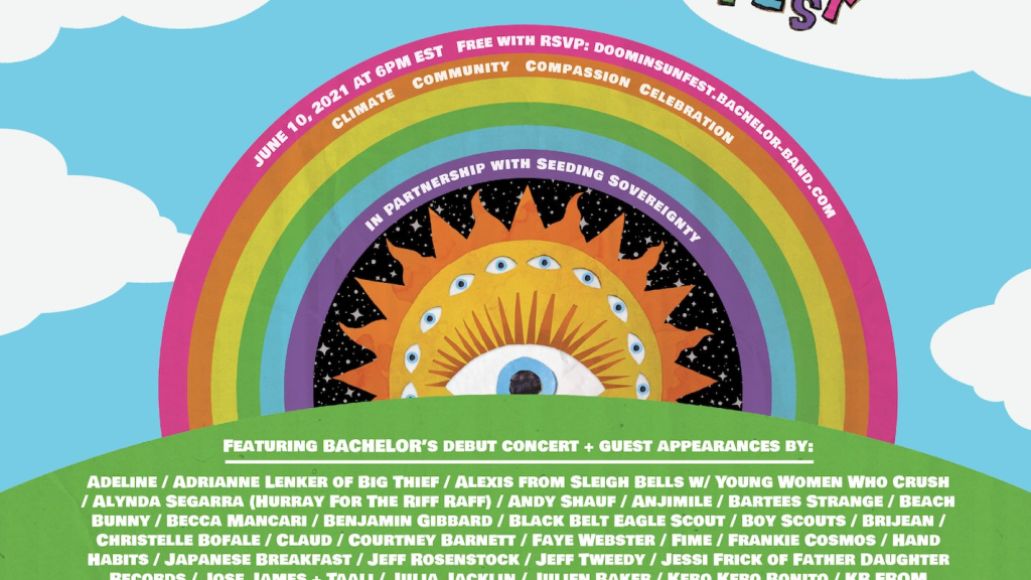