The Pitch: Live-action Disney remakes typically come in one or two flavors. The first, and most common, is the slavish recreation of the original (The Lion King, Aladdin) that usually sucks the soul out of its source material in favor of a grim retelling with little to no personality of its own. Then, you’ve got your Maleficents — adaptations of Disney works that lean into the camp of their more vivid villains, centering them in an arch origin story where we learn how the whole “evil queen” thing came about.

This time, it’s 101 Dalmatians baddie Cruella DeVil’s turn, honey, and the challenge falls to I, Tonya‘s Craig Gillespie to revamp the canine-couture-loving dog murderer into something resembling an antihero. First things first, Cruella isn’t even her real name: In the opening minutes, we learn of Estella (Emma Stone), a scrappy street rat who becomes orphaned at a tender young age and falls in with a pair of mischievous thieves named — you guessed it — Jasper (Joel Fry) and Horace (Gillespie stalwart Paul Walter Hauser). The three grow up together, thieving on the streets — with a couple pet dogs, natch, lest we think they’re monsters — and eventually find an “angle” to pursue Estella’s aspiring career in fashion design under the tutelage of London’s foremost fashion queen, the Baroness (Emma Thompson).

But as Estella struggles to strike out on her own under the Baroness’ thumb, she decides to forge her own path by crafting an over-the-top persona named “Cruella,” who starts setting the pre-punk ’70s fashion scene on fire with one elaborate stunt after another. And as Cruella and the Baroness’ battle of wits rises, both will end up doing horrifying things to stay at the top — and even settle some old scores. 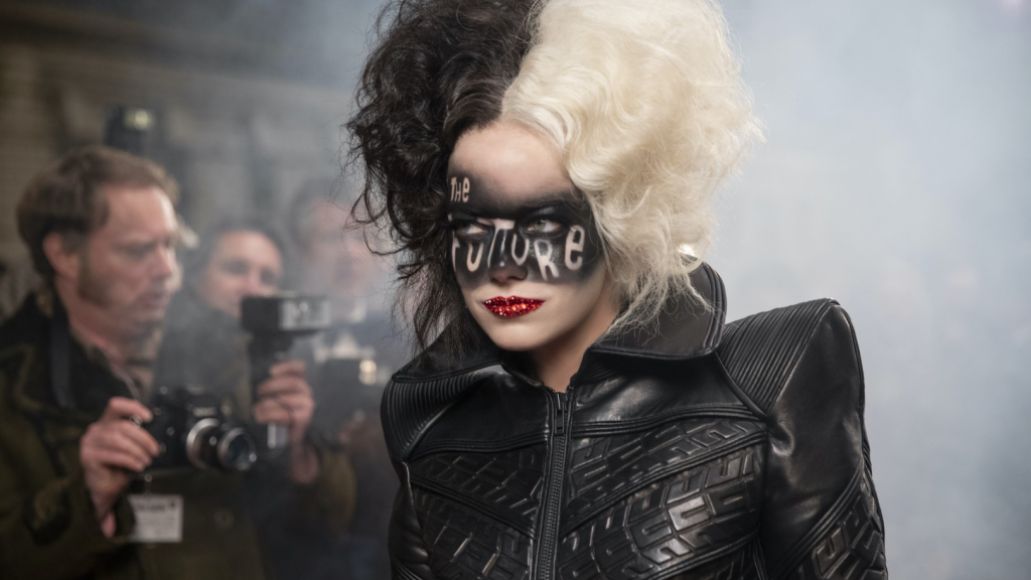 A Bark Wars Story: In fairness, the creative team behind Cruella had an impossible task to perform: The Cruella of the original story isn’t just a haughty, self-important baroness, she’s a literal dog murderer — which, in case you don’t know, is kind of hard to come back from. To that end, screenwriters Dana Fox and The Favourite‘s Tony McNamara instead give us a Cruella in black-and-white wig only, a beaten-down underdog who #girlbosses her way to the top of the fashion world and doesn’t even have to harm a single pup when she does it. The Joker comparisons that flew around when the trailer dropped aren’t entirely off-base: they’re both gritty, underlit, ’70s-inspired tales of a downtrodden member of the working class turning to villainy to overcome their thin prospects.

Smack dab in the middle is Stone, who purrs and sashays her way through the film with all the confidence of an A-list actress getting to let her hair down (under various wigs, mind you) and just have fun. It’s not the most layered performance — Cruella’s particular tics box her into a limited series of expressions — but she’s brash and bold, playing both frumpy and fierce with a verve openly evocative of Bette Davis. Within the sanded-down edges of Cruella’s many pointy gowns, Stone has a blast with the material.

Thompson makes a formidable Baroness, her dynamic with Estella clearly echoing the Miranda Priestly/whatever-Anne-Hathaway’s-character-name-was dynamic from The Devil Wears Prada. The problem is, though, we got to peek at the vulnerabilities Priestley was compensating for with her bluster; Thompson’s Baroness is merely an old, unscrupulous enemy of both Estella and her forward-thinking fashion sense (and someone with not-so-surprising links to Estella’s own misfortune).

The problem is that, for all its radical reinvention of the character, Cruella still feels that Solo-esque need to tick all the requisite origin story boxes. We’ve gotta learn where “Cruella” came from, how she came up with the name “DeVil,” her hatred of Dalmatians, her connection to Anita Darling (Kirby Howell-Baptiste), the list goes on. Her fall from grace follows predictable patterns: childhood traumas, a distant relationship with an old friend (Howell-Baptiste’s Anita, here frustratingly cornered into the role of the Black woman sidekick who proves useful to the white lead), an eee-vil mentor whose affectations our protagonist adopts as she grows more into herself. “You have to follow the pattern,” Cruella’s ill-fated mother (Emily Beecham) tells her as a child in the film’s opening scenes; she could very well have been talking to the screenwriters. 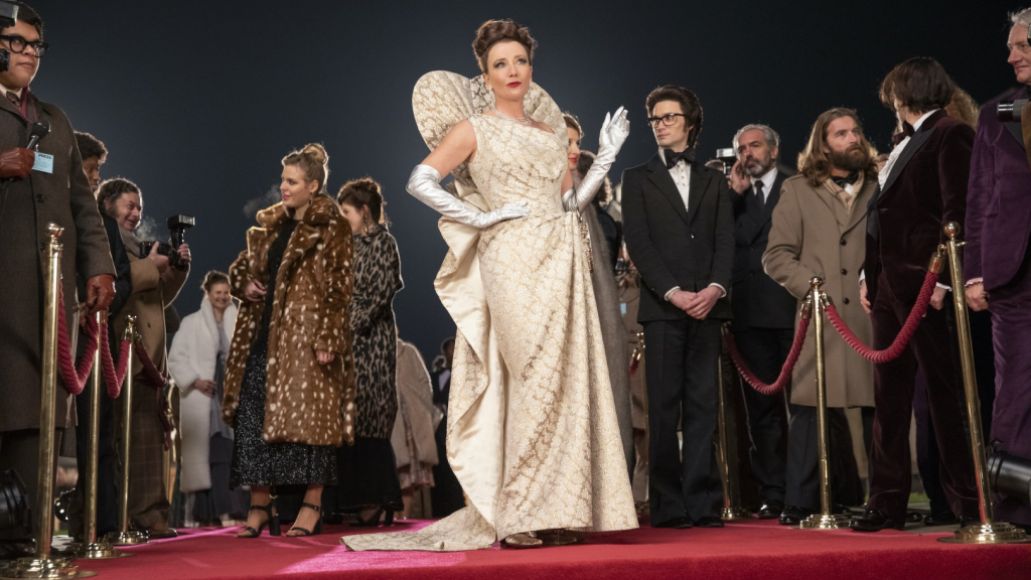 The Devil Wears Perdita: That said, for all its formula and flaws, Cruella manages to crawl its way to the upper echelon of live-action Disney remakes by sheer style. More than Stone and Thompson, the real stars of Cruella are the costumes, designed to within an inch of their lives by Jenny Beavan, a veritable cornucopia of high-fashion and punk-fusion looks that make Phantom Thread look like Baby Gap. Estella’s bold, red-and-black gowns and asymmetrical masks battle it out with the Baroness’ haute-couture pencil skirts and studded gowns, each new look a feast for the eyes. Sure, the ’70s vibe infuses throughout the wide lapels and loud patterns of the supporting characters as well, but the battling fashion schools of Baroness and Cruella are well worth the price of admission.

Good thing, too, because you’ll be looking at them for a good long while: Cruella makes a compelling case for most movies working best at ninety minutes. At two hours and fifteen minutes, Gillespie and the screenwriters strain to give Stone and the cast enough to do, which means the plot needlessly cycles through the same beats just to keep the story moving. There’s dognapping, murder, high-concept fashion stunts at Regent’s Park, multiple heists and capers, attempted arson — the film flits between genres in desperate need of something to latch onto. It’s all quite fun in the moment: Stone’s wide-eyed joie de vivre, Thompson’s withering glares, and DP Nicolas Karakatsanis’ constantly moving camera breeze us from one plot point to another gamely.

It’s even enough to get you through some truly dog-eared needle-drops, some of the most groan-inducing record pulls of recent vintage. “I Just Wanna Be Your Dog?” You got it! Does Nina Simone’s “I’m Feeling Good” play as Cruella starts to embody some of her haughtiest aspects? Yup! Do we hear the ominous bongos of “Sympathy for the Devil” pipe in right as Cruella achieves her final villainous form? What do you think? Still, it’s no skin off my Dalmatian: if kids really take to this, at least parents can listen to some ELO every once in a while, instead of having to hear “Do You Want to Build a Snowman?” for the umpteenth time. As Babby’s First British Pop-Punk Soundtrack goes, we could do a lot worse.

The Verdict: In many ways, the decision to shift Cruella‘s setting to 1970s London works to its benefit: if a bunch of talented, money-hungry artists are going to work for Disney, they might as well channel the corporate-mandated villain origin story into a pet project to suit their own aims. Stone, Thompson, and the gang are all having a ball wearing incredible costumes and living up a squeaky-clean version of ’70s punk fabulousness, and it’s hard not to let that infectious glee take over for a while.

Granted, it wears off before the end credits roll, and Disney starts yanking Fox and McNamara back on script with some last-minute tugs back into the 101 Dalmatians mythology. (Kayvan Novak even shows up as Roger, now reimagined as the Baroness’ jilted ex-lawyer, to tease some plot points about the original 1961 film, as if that’s where this story has been going as opposed to some neat alt-universe version of Cruella.)

But as live-action Disney remakes go, this at least grasps at a personality, and that sets it above most of the pack (Pete’s Dragon, that undersung classic, excepted).

Where’s It Playing? Cruella douses herself in artfully-gaudy punk couture and vamps to your nearest theater on May 28th, right alongside Disney+ (with Premier Access, meaning an extra $30 price tag on top of your existing subscription).