More than two years ago, then Cannibal Corpse guitarist Pat O’Brien was arrested for a bizarre incident that involved assault, burglary, a house fire, more than 80 firearms, and three skulls. It has just been reported that O’Brien was recently sentenced for his actions that evening.

The death-metal guitarist made national headlines for his exploits on December 10th, 2018. He apparently broke into a home in Northdale, Florida, where he pushed a female occupant to the ground and shouted “the rapture is coming.” When confronted by authorities, he charged at a deputy with a knife, at which point he was subdued with a stun gun. At the same time, the nearby house he was renting was on fire. A subsequent search of O’Brien’s home turned up more than 80 firearms, a couple flamethrowers, and three skulls.

Following the incident, the guitarist appeared in court with an anti-suicide vest and shackles. He was officially charged with “aggravated assault on a law enforcement officer with deadly weapon, and burglary of an occupied dwelling with assault or battery.”

Now, more than two years later, Blabbermouth reports that O’Brien was quietly sentenced on March 16th of this year to time served, five years’ probation, and 150 hours of community service. He was also ordered to pay $23,793.45 in fines, and to comply with random drug and alcohol evaluations, as well as psychiatric evaluations, if necessary.

O’Brien had been a member of Cannibal Corpse since 1997, but he was replaced on tour by producer and Hate Eternal frontman Erik Rutan after the incident. Upon announcing their recently released new album, Violence Unimagined, the band confirmed that Rutan had permanently replaced O’Brien.

Revisit the television coverage of Pat O’Brien’s arrest in the news report below. 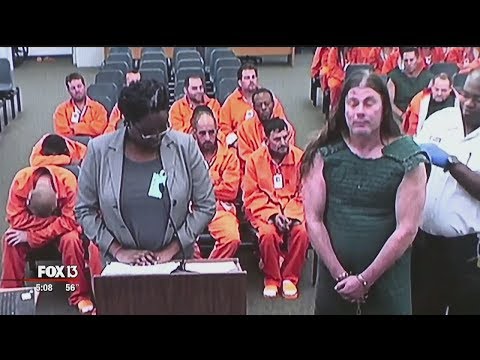