Chicago’s annual Riot Fest has unveiled its updated 2021 lineup, with an impressive list of bands that includes headliners Nine Inch Nails, The Smashing Pumpkins, and Run the Jewels, along with such acts as Faith No More, Pixies, DEVO, and many more. The four-day event takes place September 16th-19th at the Windy City’s Douglass Park.

Singer Mike Patton will be doing double duty at Riot Fest, not only fronting Faith No More, but also Mr. Bungle, who returned last year after a 20-year break.

A message on the festival’s Facebook page states, “The Riot Fest 2021 lineup is (mostly) here,” implying that even more bands will be announced.

Not only has (most of) the 2021 bill been revealed, Riot Fest organizers have also announced that My Chemical Romance and the Original Misfits will headline the 2022 edition of the Chicago festival. MCR originally were supposed to headline the 2020 Riot Fest but that was postponed due to the pandemic. They were initially announced as a headliner for the 2021 edition, but the band since decided to put off their reunion tour until 2022. So far, MCR are the only act that’s been revealed for the 2022 Riot Fest, which is set for September 16th-18th of next year.

Update – May 21st: Riot Fest organizers have released the daily lineups, with Smashing Pumpkins headlining on Friday, Run the Jewels topping the bill on Saturday, and Nine Inch Nails closing out the festivities on Sunday. Moreover, Rancid, Machine Gun Kelly, Dropkick Murphys, Knuckle Puck, Four Year Strong, 3OH!3, The Bronx, Bleached, Citizen, Man On Man, FACS, The Bollweevils, and more have been added to the bill since last week’s announcement. See the updated lineup poster below.

Three-day passes for both the 2021 and 2022 editions of Riot Fest are available now at this location. 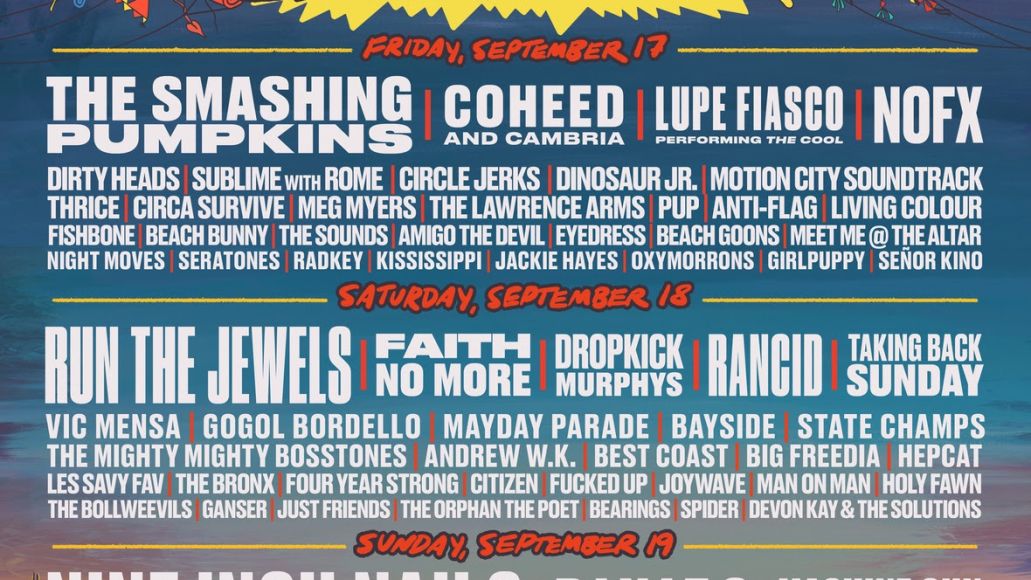