The biographical details that inspired St. Vincent’s sixth album Daddy’s Home are no mystery. The 10-year imprisonment of Annie Clark’s father for his participation in a $43 million penny stock manipulation scheme, and his release in 2019, have been much-discussed. But despite the title, Daddy’s Home is most interested in women — both real and fictional — who may be influenced but are absolutely not defined by the men in their lives. Moreover, the richest aspects of Daddy’s Home, out May 14th, have nothing at all to do with the daddy in question.

The album’s titular track addresses Clark and her father’s experience most directly, containing deeply personal lyrics about Clark signing autographs in the prison waiting room at the release of her father, aka “inmate 502.” That track is ’70s sleaze turned up to an 11, and pairs appropriately with the album’s slinky, grimy first single, “Pay Your Way in Pain”. And while both are stylish, these tracks — along with the The-Who’s-Tommy-style mind trip of “Live in the Dream” — feel more one-dimensional and costume-y than other more compelling elements on the album.

In fact, Daddy’s Home — and to greater and lesser degrees, all of St. Vincent’s work — hits hardest when it focuses on the woman who was left behind by her father, and how she grew up to see the world. As Clark puts it on the title track, “You did some time/ Well I did some time too.” Or, as she observed to NME regarding her father’s time “in the clink,” “In the intervening years — good God, I’ve become daddy.” In line with positioning herself as such an entity, Clark also talks about becoming immersed in the fairly masculine proto-punk, pre-disco New York City funk and soul of the ’70s, describing the music she listened to as a child with her father.

On 2017’s Masseduction, St. Vincent’s angle was kinky, selfish desire, a simultaneous embrace and takedown of hedonistic self-satisfaction. On Daddy’s Home, she is more world-weary, accepting, almost apologetic about her rejection of social norms — with an emphasis on the almost. Meanwhile, Clark doesn’t just see herself in her father, but in various women, too — like those who dress up in white and slip on the ring, as she describes distantly atop romantic strings on “Someone Like Me.” However, the characters Clark is most interested in and tenderest toward, the ones she sees herself in, are the “freaks.”

Indeed, throughout Daddy’s Home are soft and lyrically revelatory character sketches of people, mostly women, on the outskirts of the norm. Clark has invoked real life trans icon Candy Darling both in interviews and press, as well as on the album itself; Clark’s aesthetic directly references Darling’s hair and overall style. The struggles of a trans woman in 1970s New York, of course, will always be different than those of a cisgendered woman, and it’s worth noting that Clark toes the line between inspiration and treating a marginalized historical figure as a costume.

Still, Clark clearly understands that Darling was characterized, more than she deserved, by the men in her life, such as Andy Warhol, who featured her as one of his “superstars,” and Lou Reed, who penned “Walk on the Wild Side” about her. Despite that, Darling had a unique identity and developed her own aesthetic that made her an icon. And while she died too early of cancer, she lives on through tributes like those from Clark, who credits Darling as an artist in her own right; the credits of the Daddy’s Home album conclude with: “And Candy Darling lived within and presided over it all.”

The other historical women explored on Daddy’s Home, produced by Clark and Jack Antonoff, arrive in a cluster on second single “The Melting of the Sun”, which is a powerful love song in its own way. As she does with Darling, St. Vincent renders portraits of several iconic 20th century women with grace and admiration: a hounded Jayne Mansfied, an abused Marilyn Monroe seeking relief, authentic Joni Mitchell, brave Tori Amos who spoke out about her rape, proud Nina Simone who fought against vicious racism. Clark sings of missing a party and being on the dark side of the moon, seemingly in this other world where she can reflect on the impact of these embattled women and watch them watch the sun melt — in a sense, watch them survive the impossible.

St. Vincent Shares Psychedelic Video for “The Melting of the Sun”: Watch

Clark’s own attempts to measure up come through as she tries to figure out where she exists among this lineage, and if she’s nothing but a “benzo beauty queen.” Working to honor the women who paved the way before her and reflecting on what type of musician, woman, and storyteller she is herself, she sings, “Me, I never cried/ To tell the truth, I lied.” The confessional elements of “The Melting of the Sun” suggest that anxieties about her legacy as a woman and an artist live deep within her, and she seems to rip them wide open wide on “My Baby Wants a Baby”.

Another recurrence in St. Vincent’s music is a perpetual dissatisfaction with traditionalism. Clark deftly deconstructs the expectations of motherhood on “My Baby Wants a Baby” by casting herself as a woman who wants a less domestic kind of legacy. She understands it’s normal for her lover to want a baby, but she’s also frank about how her own desires conflict — and it’s not just the ones about wanting to microwave all her meals and stay in bed all day. It’s about a musical legacy, and how the traditional trappings of womanhood might infringe on that. She doesn’t want a baby, she admits, because, “I wanna run I wanna run I wanna chase/ The ending I can’t see.” It’s this chaotic tangle of feelings about motherhood that stands out far beyond any observations about masculinity on the album.

Finally, the narrator of the soulful and subdued “At the Holiday Party” sees what no one else cares to: the cracking face of a girl who once was working on a screenplay and whose “Gucci purse [is] a pharmacy.” She is pretending to want the surface-level sex and drugs “so no one sees you not getting what you need.” It’s almost the same sentiment as the lusty, desperate “I wanna be loved!” of “Pay Your Way in Pain”, but the latter has a sense of artificiality that obscures any deep vulnerability. When Clark sings “you can’t hide from me” — and her backup singers repeat the refrain — there is a real chance of connection among women in turmoil.

Album closer “Candy Darling” is one final snapshot of tender adoration for a woman going through it, and who lived life on her own terms. As metaphors go, the red bodega roses are a literary home run, representing perfect but impermanent beauty in an almost absurdist “lowlife” environment, and also alluding to the 1973 Peter Hujar photographs of Darling on her deathbed. As Darling takes her last uptown train into the afterlife, it feels as though all of the women of the album are gathered together to commune, with Daddy nowhere to be found. 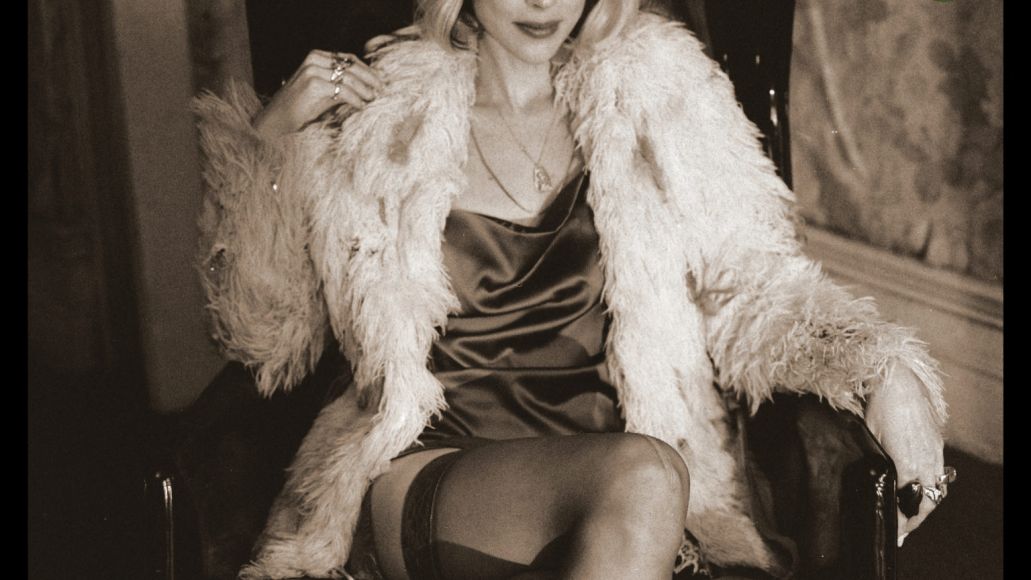