According to research in Denmark and China, listening to hard rock and heavy metal can lead to unhealthy food choices.

The new study was published in Appetite on April 16th and involved 215 cross-cultural participants from China and Denmark. They were presented with a variety of food choices, healthy and unhealthy, and different soundtracks.

A prior pre-study survey determined what was a “healthy” or “unhealthy” song, with heavy metal and hard rock falling into the latter category along with aggressive hip-hop.

Across both cultures, participants were presented with two versions of the same song, a “healthy” one with jazzy piano, slower tempos, major keys, and an “unhealthy” version with distorted guitars, a fast tempo, cymbal-heavy drums, and minor notes. In addition, the researchers underlaid sound effects with each soundscape, adding bustling city noise to the unhealthy soundtrack and pleasant ocean waves to the healthy music.

As it turned out, the people who did listen to the “healthy” song tended to reach for healthier foods, while those who listened to the “unhealthy” tune opted for the less healthy options.

The study found a “causal relationship between healthy sounds and healthy food choice.” Certain sounds, not unlike tastes, were found to be either bitter or sweet — “sonic seasoning effects” according to Danni Peng-Li, a doctoral student in the department of food science at Aarhus University and the study’s lead author.

“Usually, when we think about food, we think about the taste, the aroma, and, or course, the sight of it,” Peng-Li told The Academic Times. “But sound has been, I would say, underrated [as a topic of research].”

Essentially, the researchers concluded that the busyness of the unhealthy sounds compromised participants’ higher brain functions, distracting them and making it harder to consider food choices.

Rob Zombie on His Vegan Lifestyle: “The Meat Industry Has an Unsustainable Future”

British tabloid rag The Daily Star got ahold of the new study and immediately pumped out a dubious headline: “Metal Makes Us All Heavy”. Quotes by Peng-Li were taken out of context, and the tabloid piece even garnered a roundtable discussion by UK talk show host Jeremy Vine.

We’re not so sure the act of listening to metal and hard rock will make you fatter. However, blasting some technical death metal in your Airpods might make it harder for you to thoroughly read the menu next time you’re grabbing a bite at the deli.

That all said, there are plenty of healthy-minded metal musicians out there, including Rob Zombie, a devout vegan. And there’s the Black Sabbath tribute band Mac Sabbath, who dress as metal versions of McDonalds’ characters but rail against fast-food in their lyrics (and have a new pop-up book called Drive Thru Metal).

The study can be found here, while The Daily Star‘s wacky tabloid headline can be seen below. 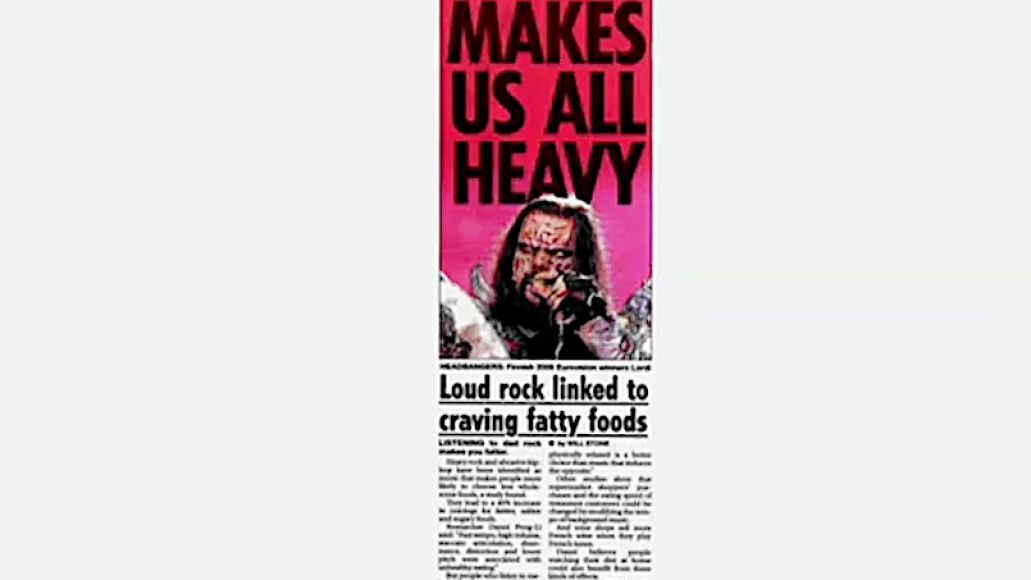