We aren’t living in the sunniest of times, but some of the best music comes out of the dark. Meet The Linda Lindas, a group of teen and pre-teen girls who responded to targeted harassment with the song “Racist, Sexist Boy”. They performed the track during a May 4th concert at the LA Public Library, and the rawness of the footage has touched a nerve and made the track go viral.

Lucia (14), Eloise (13), Mila (10), and Bela (16), are already veterans of the Los Angeles punk scene. Two years ago they had their first internet hit with a cover of “Rebel Girl” by Bikini Kill. It went far enough as to catch Bikini Kill’s attention, and the young rockers opened for their idols in April of 2019. That in turn brought them to Amy Poehler’s attention, after which they contributed music to her recent Netflix movie Moxie. Their punk is crisp and angry; their aesthetic reminiscent of the rio grrrl heyday.

Their new song “Racist, Sexist Boy” was written by Mila and Eloise after a boy singled out Mila during school. “A little while before we went into lockdown, a boy in my class came up to me and said that his dad told him to stay away from Chinese people,” she said. “After I told him that I was Chinese, he backed away from me. Eloise and I wrote this song based on that experience.”

Eloise added with a snarl, “So this is about him and all the other racist, sexist boys in this world!” After a classic, “One, two, three, four!” they were off, with a sludge black bass line and simple, shout-along lyrics. Eloise commands the mic with a controlled fury, while Bela and Lucia headbanged with the best of them.

10-Year-Old Nandi Bushell Gets Pixies’ Seal of Approval for Her “Where Is My Mind?” Cover: Watch

“Racist, Sexist Boy” appears at the 33:30 mark of the video below, and you can scroll onwards to watch a short clip taken from the song.

Anti-Asian hate crimes have been on the rise since the start of the pandemic, which President Biden tried to address on May 20th with the signing of the COVID-19 Hate Crimes Act. Earlier this month, Consequence spoke to Asian and AAPI musicians about their experiences with violence and bigotry. 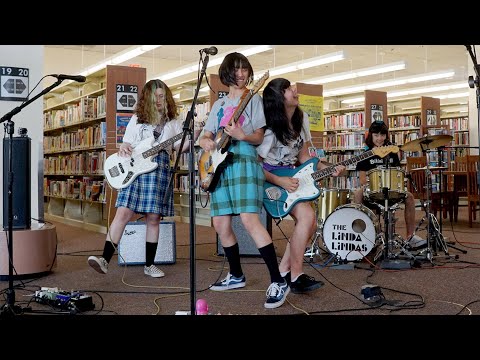 This band is called “The Linda Lindas” and I’m a fan now. They got the vibes right. They’re gonna go far. pic.twitter.com/nhudSmoBXs