A new private island festival and cruise dubbed Voragos: Destination Lunasea Beach will launch in 2022, with Rob Zombie and Mastodon serving as headliners. The “vacation experience” will set sail from Miami on February 16th and return on February 20th.

Voragos: Destination Lunasea Beach is a joint production from festival promoter Danny Wimmer Presents and cruise specialists Sixth Man. The cruise will take place on the Norwegian Pearl ship and includes a full-day stop (February 18th) at a private island in Harvest Caye, Belize, where the one-day Lunasea Beach festival will feature a full lineup of bands.

Back on the ship, Amigo the Devil, Kevin Martin (Candlebox), Brett Scallions (Fuel), and Austin Meade will deliver intimate sets on the Storytellers Stage. There will also be a Comedy Stage featuring Jim Breuer, Big Jay Oakerson, Rachel Feinstein, and Shayne Smith, as well as a midnight after-party headlined by Brass Against.

Update, August 4th: Mudvayne, Atreyu, Crown The Empire, and Afterlife have joined the Voragos lineup, while Chevelle have dropped off due to a scheduling conflict. In addition, radio personality Jose Mangin has been named the official Voragos host. See the updated lineup poster below.

All told, Voragos promises more than 40 performances across five stages, with most bands playing multiple sets throughout the cruise. The ship offers up a casino, an outdoor pool, hot tubs, and more, while the private island boasts a pool with a swim-up bar, a salt-water lagoon for water sports, zip-lining, and snorkeling, among other activities.

Danny Wimmer Presents CEO Danny Hayes stated, “For DWP to do a cruise, we had to have something that would make our voyage uniquely ours. The opportunity to work with Sixthman and add a festival on a private island in Belize gave us the twist we were looking for and the comfort of working with a best-in-class partner like the Sixthman team. When else will you ever have the chance to see Rob Zombie and Chevelle on a private island with 3,000 of your closest friends?”

Prices for the Voragos: Destination Lunasea Beach cruise and festival start at $898 per person for a 4-guest interior room. Tickets are available at the official Voragos website. See an announcement video and the full lineup poster below. 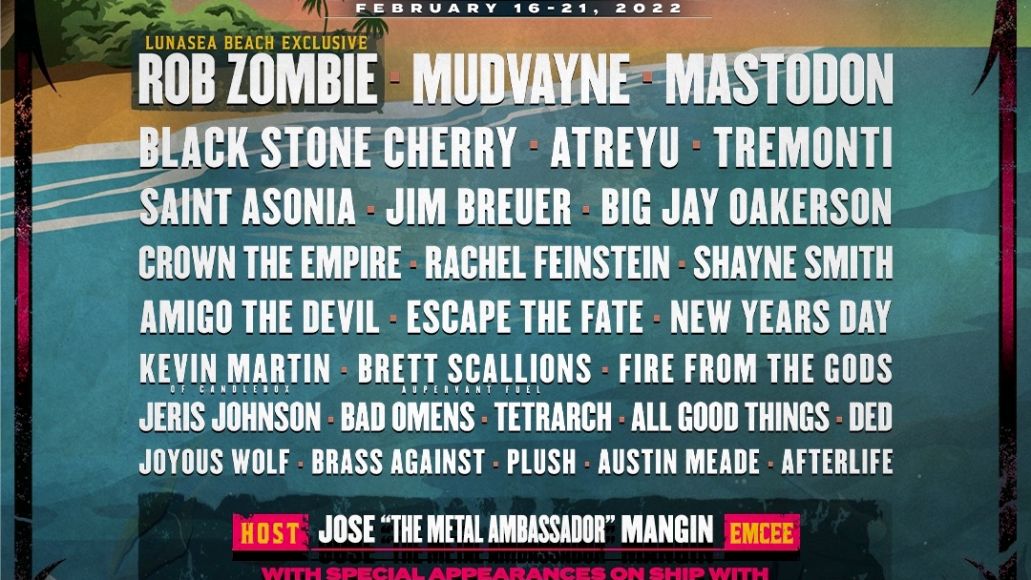