Bad Religion and Alkaline Trio will finally get the chance to embark on their co-headlining tour after postponing the outing due to the pandemic. The originally scheduled trek was supposed to kick off in March 2020, the same month the concert industry shut down, but will now launch this October. Tickets are available to purchase here.

The newly rescheduled 30-date tour kicks off October 15th in Riverside, California, then makes its way east before returning to the West Coast for a final gig on November 26th in Los Angeles. War on Women will serve as support for the entire run.

“This tour is special,” said Bad Religion singer Greg Graffin in a press release. “Not only are we celebrating the return of live music, but we get to do it with Alkaline Trio, who are such a great band, really excited about this!”

Alkaline Trio singer-guitarist Matt Skiba, who is also a current member of Blink-182, added, “Bad Religion was one of my first loves. I remember exactly where I was the first time I heard [their 1988 album] Suffer. They are one of the very reasons I started playing punk rock music and continue to today. This tour is going to be epic on many levels. We’ve done Warped Tour and Festival shows many times over the years but this will be the first time it’s just us and I couldn’t be more thrilled!”

California punk legends Bad Religion, who celebrated their 40th anniversary as a band last year, released their most recent album, Age of Unreason, in 2019. Chicago’s Alkaline Trio’s latest full-length effort, Is This Thing Cursed?, arrived in 2018, but the band did issue a new three-song EP, titled E.P., last year.

Tickets for the tour go on sale Friday (June 25th) via Ticketmaster, with a pre-sale starting today (June 24th). See the full list of dates and tour poster below. 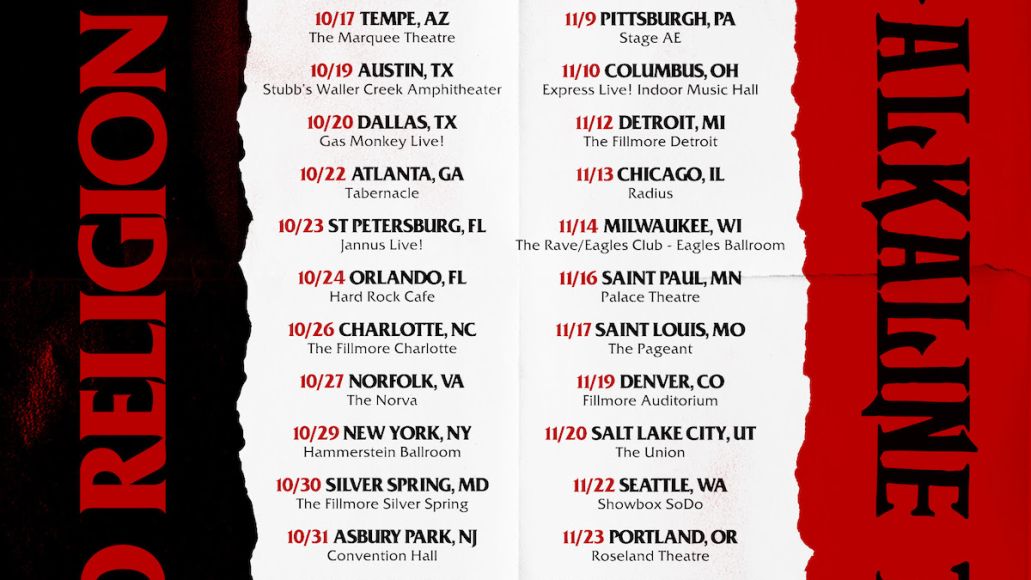