“A miracle isn’t huge, it’s just this,” BTS leader RM said, his expression a bit heavy during the closing comments of the two-day concert weekend, in celebration of the group’s eighth year together. “It’s just this, this communion we feel.”

RM, Jin, Suga, J-Hope, Jimin, V, and Jungkook know a thing or two about communion. While the pandemic has continued to delay their world tour that was slated for 2020, and prevented the Korean septet from attending their first Grammys as nominees or performing in front of any audiences, they’ve found other ways to connect with fans throughout these difficult months.

Hope is on the horizon, and it’s almost poetic that today, June 14, South Korea lifted concert restrictions, allowing up to 4,000 people at future events, missing BTS’ anniversary extravaganza by just hours. Instead, the show was broadcast virtually to allow global participation, though the arena (which featured a stage shaped like an eight but laid out horizontally to also conjure an infinity sign) remained empty.

Still, BTS have always proven that the show must go on, and over the course of June 13 and 14, the virtual celebration of the group’s official debut date was a spectacle fit for the kings of the charts. (“Butter” currently sits at No. 1 on the Billboard Hot 100 for a third week.)

Many of BTS’ chart-toppers were packed into the two-day agenda, including the more recent “Life Goes On,” “Dynamite,” and “Butter,” as well as staples like “Idol” and “Fire.” The group also debuted b-sides from November’s BE, with subunits taking on “Stay” and “Fly To My Room.”

Perhaps most exciting (at least to this writer) was the inclusion of “Dis-ease,” the ‘90s-soaked banger that landed on our Top Songs of 2020 list. For anyone else who has been staunchly committed to the “Dis-ease” agenda, a time of rest has finally arrived, ushered in by the sweet sounds of that perfect bridge.

Editor’s Note: Make sure to check out Stanning BTS, a biweekly podcast covering anything and everything having to do with BTS and ARMY.

Each concert also featured one solo song (day one’s came from Suga, day two from J-Hope), remixed to include the entire group. There’s a freedom granted to BTS in their solo projects that allows members to explore individual sounds and aesthetics, a contractual process rarely granted to Western groups. Often, when a member of a band wants to go solo, they go solo. But BTS, who always seem to insist on tossing out the rulebook, don’t just return to one another after dropping mixtapes, solo albums, or individual music videos — they invite the other members along for the fun.

Day one featured a group performance of “Daechwita,” Suga’s scorched-earth battle cry released under his solo moniker of Agust D, also marking the first time the song was performed live. Seated appropriately on a throne, sword in hand, he watched the members join on the exceptionally difficult track, clearly trying to remain in character as a detached king gone mad, but of course he was unable to contain his fond smile. 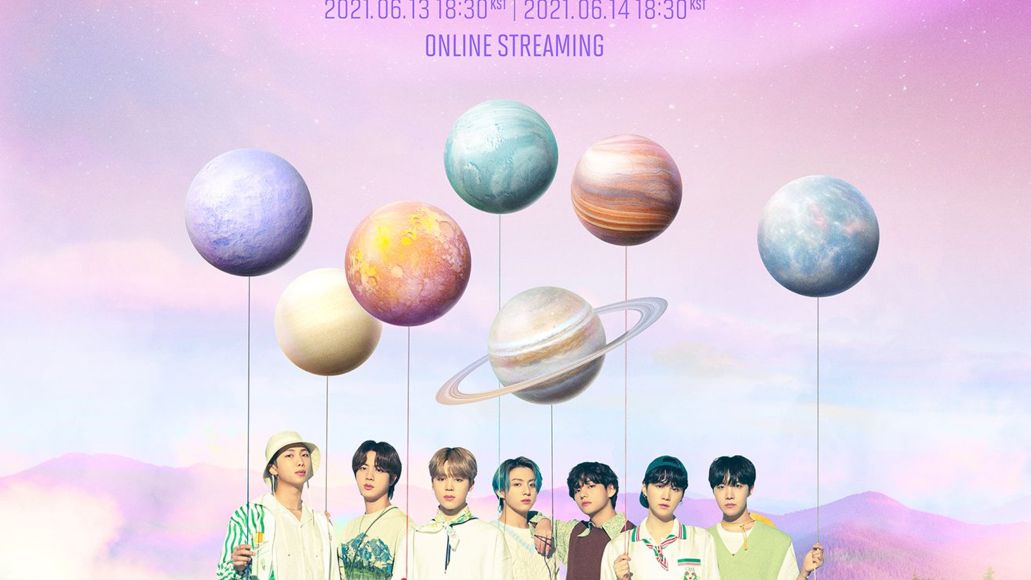 These solo tracks being transformed into team efforts between all seven members is a thesis for the way BTS operates: exploring their own skill sets, pushing themselves individually as artists, but always happiest when on the same stage, together. Eight years is a long time to perform as a group, and it’s hard not to believe the members when they say they’ve transcended the label of bandmates and regard each other more like family.

After almost a decade, they’ve broken so many records and shattered barriers in a way that would seem almost miraculous if they hadn’t also been so candid about their many ups and downs.

After all, seven young men from disparate backgrounds coming together to achieve world domination through hard work, the right amalgamation of talent, and the sheer power of kindness — isn’t that a bit of a miracle itself?