Judas Priest have announced a whopping 42-disc career-spanning box set titled 50 Heavy Metal Years of Music. As a preview, the band has unveiled a previously unreleased 1986 live version of “Hellion/Electric Eye” performed during the “Fuel for Life” tour in Houston, Texas.

Judas Priest are pulling all the stops for their illustrious 50th anniversary, which was originally supposed to be celebrated last year, if not for the pandemic. From an extensive North American tour this fall to a comprehensive coffee-table photo book, the campaign has sought to comemmorate the pioneering British band’s storied career.

The box set stands as the ultimate Priest artifact for collectors, archivists, and new fans alike. It houses the band’s entire discography and then some: every officially released studio and live album, three previously unreleased live recordings captured in 24-track off the soundboard, an additional five previously unreleased live recordings captured in stereo, and a final disc of “Beyond Live & Rare” cuts.

All previously released audio was remastered from the original sources by Alex Wharton at Abbey Road Studios. Live recordings were restored and edited by Tom Allom at La Cucina W8 and mastered by Wharton.

“If there’s one box set you should have in your Heavy Metal collection it should be this one — it’s immortal, proclaiming and truly representing metal for over 50 years,” guitarist Glenn Tipton said. “Flying the flag and proudly leading the way inspiring many bands throughout the years.”

Pre-orders for the massive box set are available via Judas Priest’s webstore, while the more modest vinyl version is available from Amazon.

Stream the previously unreleased live version of “Hellion/Electric Eye” and see the full collection and extensive list of contents below. 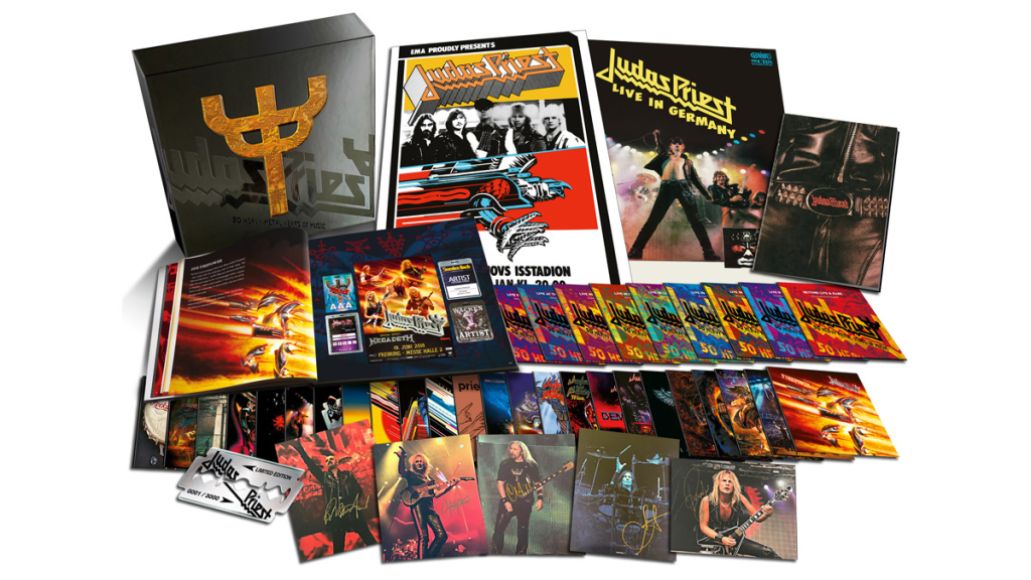