This review originally ran in June 2021 as part of our Tribeca Festival coverage.

The Pitch: Steven Soderbergh has been busier than ever since returning to filmmaking in 2017; No Sudden Move is his six feature in less than four years, premiering at the Tribeca Festival before making its way to HBO Max on July 1st.

Sounds simple enough, but the complications spiderweb out like cracked glass: Matt’s wife Mary (Amy Semietz) isn’t certain whether to trust her husband; Ronald and Curt aren’t sure whether to trust their shady boss Jones (Brendan Fraser); add in Ronald’s girlfriend Vanessa (Julia Fox), a short-tempered crime boss (Ray Liotta), and a nosy cop (Jon Hamm), and there’s plenty of criss-crossing motivations to go around. For an extra layer of sociopolitical intrigue, it all takes place in mid-1950s Detroit.

Soderbergh’s Big Score: Soderbergh loves the mechanics of a heist and how it goes wrong, from the glossy Ocean’s movies to the blue-collar Logan Lucky to his underseen noir The Underneath. n starts with the simplicity of Don Cheadle walking down the street and into a building, and starts building up both its tension and its ensemble from there.

It’s probably 40 minutes in before most of the cast has been introduced, and every performer brings some kind of delight, whether it’s Cheadle’s slightly rasped-out voice, Fox’s cartoonish ‘50s-doll affectations, or Liotta’s trademark sputtering rage. Though the movie ultimately minds its business about a lot of the personal affairs it brings up, it imbues its characters with a bounty of implied off-screen life. No Sudden Move is somehow both a stylized genre exercise and part of a larger, less rigidly controlled tapestry that reveals itself as it goes.

Emphasis on Move: Of course, that doesn’t mean Soderbergh cedes control behind the camera. After embracing digital cinema and even shooting a bunch of movies with an iPhone, the director has certain visual signatures that are more prominent than ever: Sickly yellow interiors; the camera pivoting to follow its subjects, rather than tracking with them; and, more recently, a frequent use of fish-eye lenses that distort figures at the edge of the frame. But No Sudden Move has some additional visual flourishes, reflecting its noirish bent; few directors are so adept at drawing out color and shadow from digital imagery. 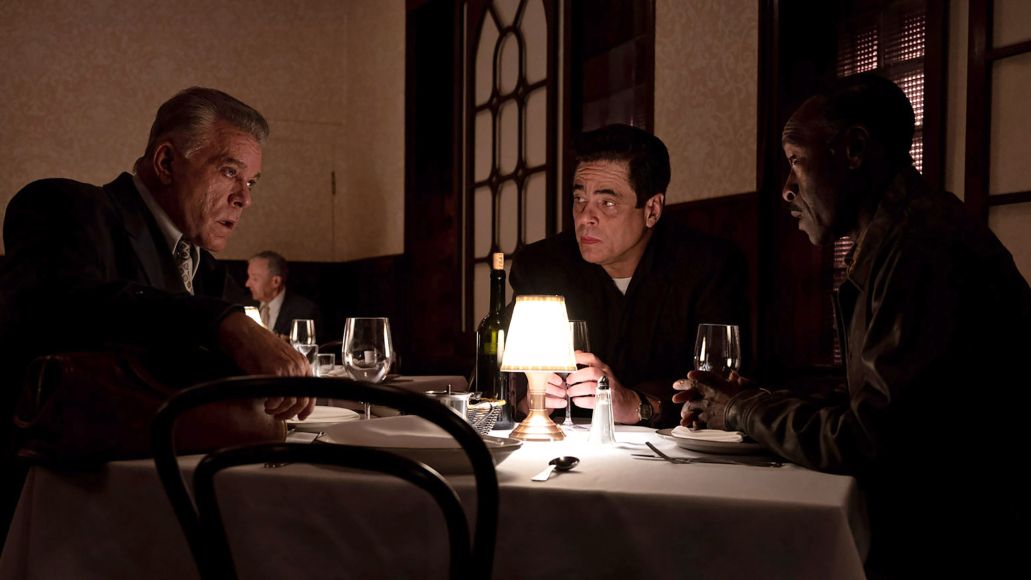 Let Them All Talk: Though it’s far from a comedy, this may be the funniest Soderbergh movie since Logan Lucky. The dialogue in Ed Solomon’s screenplay isn’t exactly hard-boiled, but it’s swift and concise, with a wryness that never sounds too quippy, especially in its first hour. (One of Ronald’s early lines sums things up nicely: “I think you have ulterior motives, but I find that sexy.”)

That said, this movie was quickly assembled last fall mid-pandemic, and there are a few points where Soderbergh and Solmon’s work feels slightly rushed: a few modern colloquialisms intrude (people probably weren’t using literally for emphasis quite so often in 1955), the schemes within schemes grow harder to follow (and less wittily delivered) in the second half, and Soderbergh’s late-career tendency to deal directly in polemic slightly neutralizes some of the movie’s punch. Imagine if Killing Them Softly, which this movie vaguely resembles, ended with informative on-screen text instead of a killer exit line.

The Verdict: This is a great-looking, propulsive piece of entertainment for grown-ups that’s all the more impressive following up the more reflective Let Them All Talk. Two movies in, Soderbergh’s HBO Max batting average is already pretty stunning.

Where’s It Playing? No Sudden Move premiered at the Tribeca Festival on June 18th, and will slink onto HBO Max on July 1st.

Steven Soderbergh's No Sudden Move Is Another Dynamite Heist: Review